Review: Batman: Sins of the Father #4 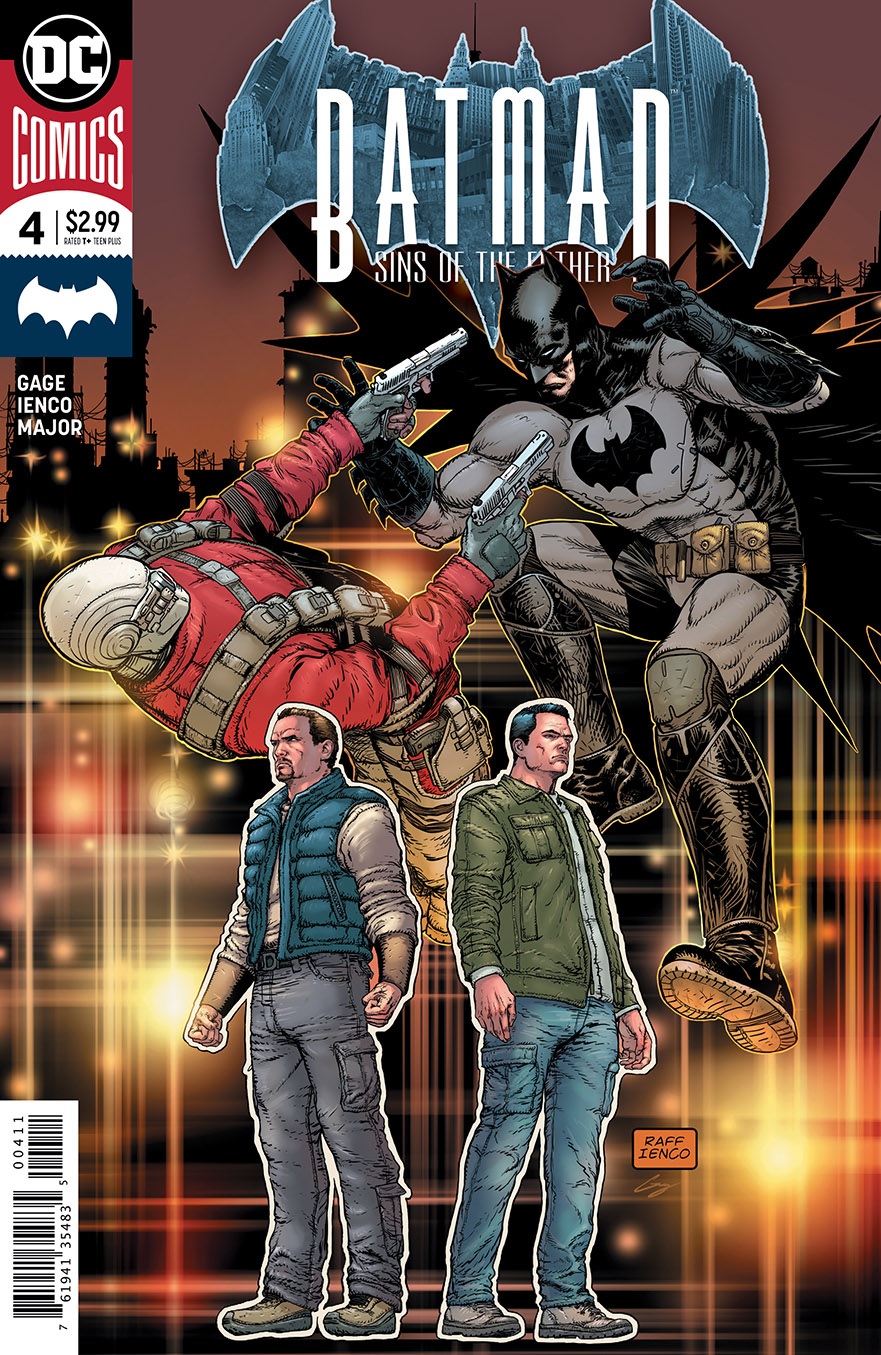 Overview: Bruce Wayne visits Floyd Lawton to learn the origin of Deadshot and makes a terrible mistake in the process.

Synopsis (spoilers ahead): The issue picks up right where the last issue left off with Bruce Wayne arriving at the mansion of Floyd Lawton. Bruce is invited in and begins to have a discussion with Lawton about why the two have not met sooner, with Lawton pointing out that they’re both rich, orphaned playboys. Wayne accuses Lawton of being Deadshot which is denied, though Lawton does admit to harboring ill will towards Thomas Wayne and those that worked with him back during his days as a mob boss. Bruce lets his temper get the best of him as he tries to defend those he knows Lawton is after, saying they were just as afraid of Thomas Wayne as the victims he committed to Arkham. It is here that Lawton reveals why he truly hates Thomas Wayne and all those associated with him.

Lawton’s origin story involves his two abusive parents and an older brother who defended Floyd as much as possible from his father’s attacks. When Lawton’s brother was fifteen he attempted to stand up to his father and was thrown down a flight of stairs where he died from the fall. Lawton told the police what happened and his parents were taken into custody and sent to Arkham Asylum for treatment. It was in Arkham that Thomas Wayne struck a deal with the Lawtons for a piece of real estate that Wayne wanted. With the deal done, the Lawtons were released and sent back home. For a few months, they were the model family under the watchful eyes of the police and child welfare workers. During this time, to help deal with his brother’s death, Floyd took up shooting, becoming an expert marksman that was being groomed for the Olympics. All did not work out for Floyd as once the police and child services went away his parents returned to being the drunken abusive parents of the past. This all came to a head when Floyd’s mom allegedly killed her husband and then herself.

Bruce is not buying the murder-suicide of Lawton’s parents and calls him out on it, threatening that he will find the best lawyers to re-open the case and have Floyd tried for the murder of his parents. Lawton pulls a gun on Bruce, seemingly falling into the trap Bruce set of having Lawton reveal himself to be Deadshot. Floyd calms down though and instead tells Bruce that they’re very much alike, only Bruce had people around him who loved and cared for him when his parents died, a luxury Floyd did not have. The police are called on Bruce by Floyd’s butler for being antagonistic toward Floyd and Bruce is escorted out by the police.

As he’s leaving Lawton’s mansion, Bruce realizes that he lost the round against Lawton, and worse, now Deadshot knows that to make Bruce pay for his father’s actions he doesn’t need to go after Thomas Wayne’s accomplices, but rather Bruce’s friends and family. Bruce now knows that it’s up to Batman to stop him

Analysis: Issue #4 of this miniseries was essentially an information dump that went into the origin of Deadshot. From his abusive parents to the death of his brother to his obsession with guns and marksmanship, no stone was left unturned as writer Christos Gage gave us essentially the Bizarro version of Batman. Unfortunately, the majority of the information was already conveyed through Batman’s investigation during the last issue. So the face-off between Bruce Wayne and Floyd Lawton came off as a retread. There were no bombshells dropped or twists and turns in the origin story that made it stand out from what we already knew and I found myself wishing this was more of a tension-filled back and forth rather than what we got. There were a few brief moments such as when Lawton pulled a gun on Bruce that I thought we might be in for a fight, but then… nothing. The upside was the end of the issue when Bruce realizes he made a mistake in confronting Lawton as Bruce Wayne, essentially putting a target on the backs of all those close to him. Not often do you see Batman bungle an interrogation so it was a clever change of pace to see that for all his planning, Batman may have met his strategic match.

Once again the art by Raffaele Ienco was a highlight, and with such a dialogue-heavy issue, you got to see a lot of Ienco’s work on facial expressions which did a lot to convey the mix of emotions Bruce was feeling as Lawton told his story. There were even some instances when you could see a bit of empathy come across, seeing as how the two are more similar that Bruce cares to admit. Of particular note was that in all the flashback scenes, which spanned a few years at a time, none of the characters changed their clothing. I really liked this artistic choice because it painted the characters as actors of sorts in a play that Lawton was allowing to be acted out for Bruce’s benefit. An alternate take is that Lawton is so frozen on a single moment of time in his past, be it the death of his brother or the murder of his parents, that he can’t view anyone as existing beyond the singular moment he’s so fixated on.

Lawton’s remark to Bruce that he feels the difference between the two of them comes down to nature versus nurture is really highlighted by the story he tells versus the origin of how Bruce became Batman. Lawton believes that it was those around Bruce that cared for him and raised him that prevented him from going down a dark path, but we as the reader know that Bruce did go down a darker path to become Batman. It begs the question that perhaps nature drove both men to become costume characters, but their final destination was altered by those around them. It’s an interesting concept that I hope is touched upon before the end of the story.

Final Thoughts: The fourth issue dragged a bit by retreading the same ground covered in the last issue with regards to the origin of Deadshot. The saving grace was the continued fantastic artwork as well as the deeper questions posed by Gage as to what drove one man to become a hero and the other to become a villain.