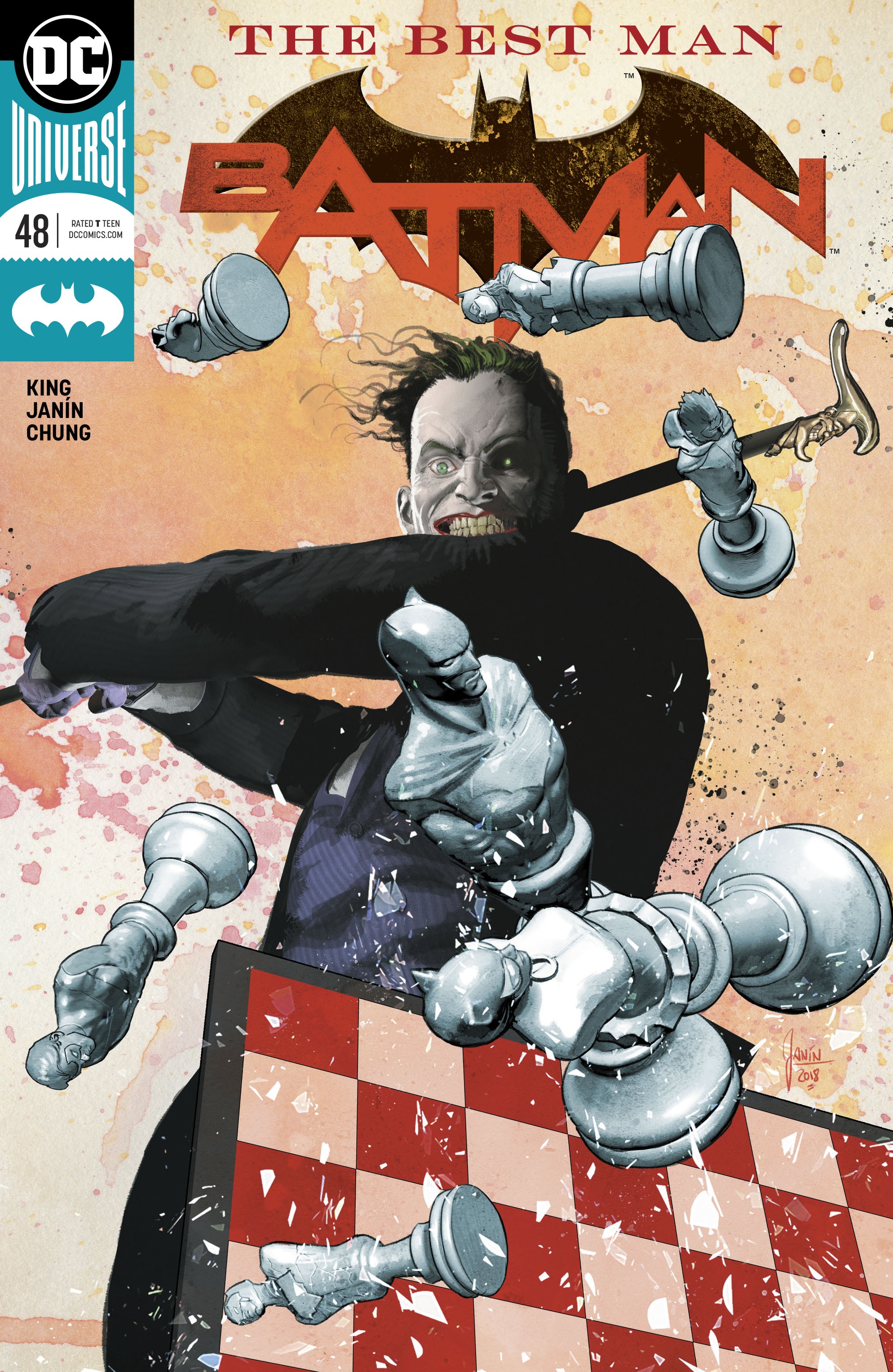 Overview: The Joker’s rage in reaction to Batman’s upcoming wedding breaks out in a vicious, murderous attack.

Synopsis (spoilers ahead): A young man prays desperately in a church, as we hear gunshots and desperate begging. As his prayer concludes, the Joker shoots him in the back of the head. We see the exterior of the church as the shot reverberates, the Bat-signal in the sky, and the flock of bats flittering away from the commotion in the foreground. The Joker stands, singing “Nanana, Batman” as Batman bursts through the stained glass windows of the church. As Batman prepares to fight, Joker finds a woman trying to escape, holds her hostage, but blows her head off before the hostage situation really begins.

Batman lunges for Joker, but Joker manages to take Batman hostage, holding his huge revolver to Batman’s head. Once again, Joker shoots his hostage in the head before concluding his monologue, but Batman’s cowl protects him from death. Leaping up from the ground, Batman ignores the maniacal, sadistic rambling of the clown, he avoids the two-gun attack and hits Joker in the face with a Batarang. Joker, talking about how he killed his mother, starts to get to his point, about Batman’s wedding, and love, and suddenly decides to hold himself hostage by pointing a gun at his own head. He tells Batman about St. Augustine of Hippo, his conversion from the Manichean heresy, the belief that the universe is two equal and opposite powers – Good and Evil, God and Satan, Batman and Kite Man. Augustine was converted from this belief to the belief in one God, one Power, which is salvation, and everything else is chaos.

Joker kneels and tells Batman to join him in prayer or he’ll kill himself.  After he finishes his mockery of prayer, he asks Batman if he is the best man, but the cross blows up with one of his traps before Batman can answer. Joker gets up after the explosion and says that for Augustine, the unity of life was God. But for most people, it’s love. Batman lies on the floor, helpless, as Joker stands over him with his gun.

Outside, Catwoman hears a shot. She quotes what Batman told her before he went in – that Joker is too dangerous, and he can’t bear for Joker to kill her. As smoke rises from the broken windows of the cathedral, Catwoman leaps into the breach.

Analysis: The last arc Tom King and Mikel Janin did together was the War of Jokes and Riddles. That arc had several solid moments in it – the story of Kite Man drawn by Clay Mann, the way King showed Batman cataloging and mourning the deaths of civilians in the war, and the lovely dinner party where Bruce Wayne attempted to negotiate an end to the war. Above all, of course, was the delicately balanced emotions of Selina accepting Bruce’s marriage proposal from the issue before the arc began. Despite all these strong moments, the overall arc was poorly paced, with several repeated sections of Batman summarizing things that happened in the war, and King revealed later that he originally had planned for the arc to be a twelve-issue miniseries with Mitch Gerards drawing, a project which turned into Mister Miracle once editorial told him to make the arc into part of the main Batman title, cutting off at least four issues from the storyline. It also suffered from a poor grasp of several characters involved such as Deadshot and Deathstroke, leading to a sense that King was just using the characters to fill slots, instead of using characters best suited to his narrative.

It seems that King has moved away from trying to tell arcs that are longer than about three issues, allowing one artist to complete a full arc before a new one has to come in because of the twice-monthly shipping schedule Batman will likely maintain for the next two and a half years to reach King’s stated goal of 103. Each arc or one-shot contributes to the overall story of Batman and Catwoman that’s been running since the second arc, I Am Suicide, also drawn by Janin. And here, without the sparse backgrounds and flatness of detail that marred the overly-ambitious, too-hastily completed feeling War of Jokes and Riddles, Janin and King construct a classic story similar to the brutally strict formalism of the first issue of I Am Suicide. Variations of the nine-panel grid dominate the layouts, especially the first page, and King uses the repeated image with small changes, and even static images, to build tension and horror. Where Scott Snyder’s Joker loves to set up impossible deathtraps and ridiculous games, King’s Joker is an improviser – taking an idea and running it to its vicious conclusion with nothing more than a couple of heavy revolvers and a lot of bullets. Janin fills the pages with rich detail without overwhelming the eye, and colorist June Chung perfectly fills his clean linework with rich colors, matching the emotions of the moments in every panel. Clayton Cowles letters with clarity, and manages to modify the scratchy, obnoxiously obvious Joker font developed for the Snyder run in the New 52 to give Joker just enough of a sense of evil in his word balloons without going over the top.

King also provides a bit of interesting theological exploration in the Joker’s monologue, which runs in nearly every panel after the first page. Using the biography and writings of St. Augustine of Hippo, a personal favorite of mine, he has the Joker lay out a philosophy of unity vs. chaos, the classic conflict of Batman vs. himself. Love, according to the Joker, is that which provides meaning, order, everything worthwhile – and that’s what he wants (or needs) to destroy, as the avatar of chaos. It will be very interesting to see where King goes with this idea in the next issue, the last before the much-publicized wedding in #50.

Final Thoughts: On the eve of their wedding, Batman and Catwoman face the personification of evil attempting to destroy everything in the face of their love.