Review: Batman: Prelude to the Wedding: Red Hood vs Anarky #1 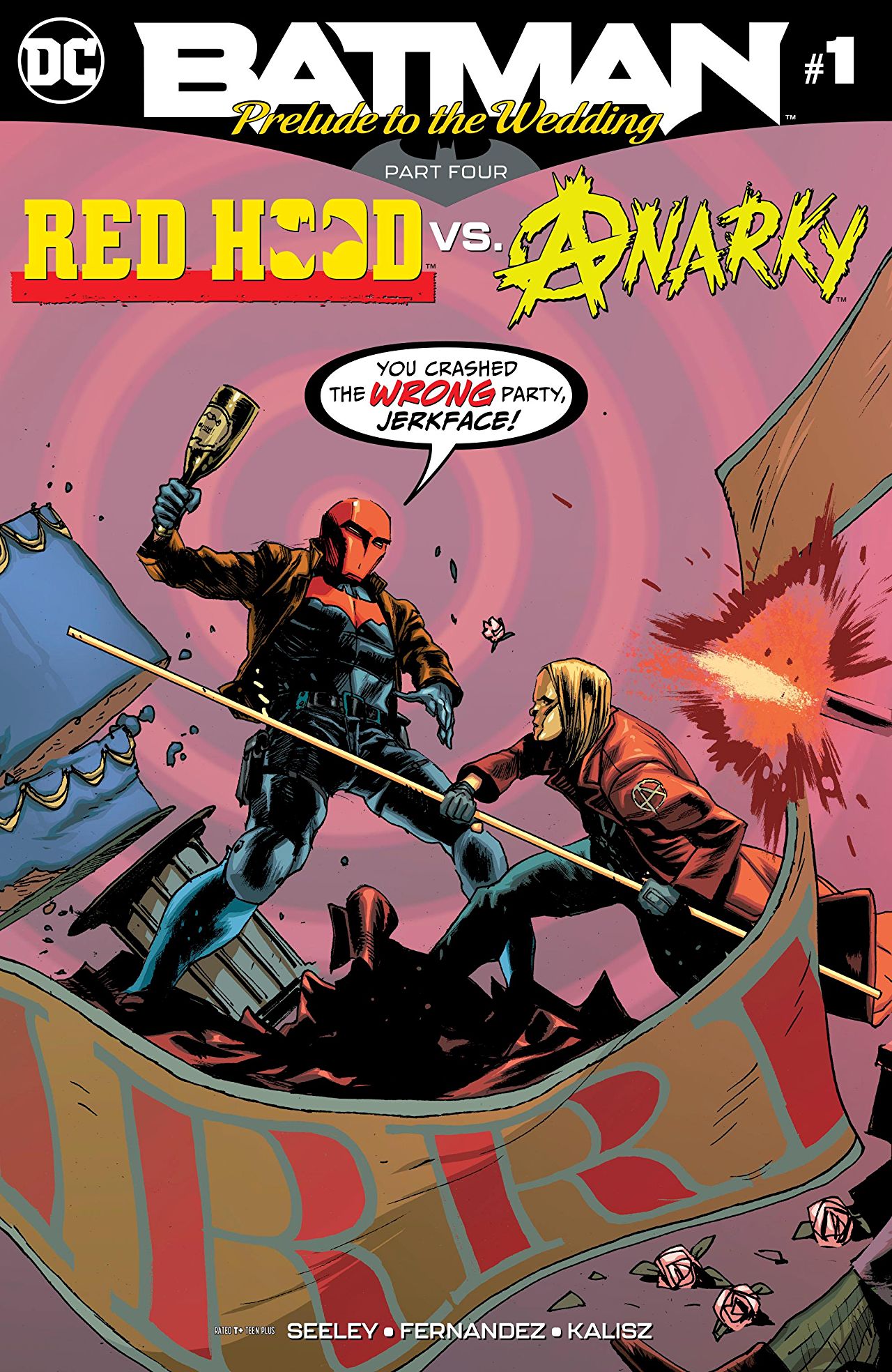 Overview: While watching Catwoman’s back at her bachelorette party, the Red Hood faces off with Anarky.

Synopsis (spoilers ahead): Selina Kyle is out for a night on the town for her bachelorette party at a Gotham City nightclub, with Jason Todd nearby discretely keeping tabs on Selina.  The story flashes back to Jason hanging out in the Batcave, where Batman asks Jason to keep her safe on her night on the town, with Jason charging $150,000 for his services.

The story moves back to the present where Jason stays out of site as Selina’s party hits a strip club.  Bizarro alerts Jason of danger at the rear of the club.  The Red Hood discovers a group of misogynist terrorists wearing gold masks who are quickly taken down before they can detonate a bomb.  The bombers tell the Red Hood that they were put up to the attack by Anarky, who is planning a large strike at midnight.  Jason follows the bachelorette party as it moves to a run down club in a bad part of Gotham that Selina would frequent as a teenager.

The Red Hood finds Anarky nearby and the two battle at a nearby construction site where Anarky is defeated.  It turns out that Anarchy distributed gold masks that turn the user into extremist version of whatever their beliefs happen to be, hoping that it would result in chaos.  The Red Hood sends out a broadcast asking everyone in the area to put down the masks, offering to donate $300 to a cause of their choice (blowing through his $150,000 fee).

The Red Hood then speaks with Anarky, who states that he was put up to the job by the Joker, and Jason leaves after knocking him unconscious.

In the epilogue, a mailman lies dead as the Joker continues to look for his invitation.

Analysis: Continuing the theme of having various characters for Batman’s world react to his impending marriage, the A-list of villains that have included the Joker, Ra’s al Ghul, Hush, and the Riddler is now joined by… Anarky?   While the character has had something of a resurgence thanks to James Tynion IV’s run on Detective Comics, he’s far from being a top-tier threat to Batman and doesn’t really fall in line with the other villains being featured. It’s not that there’s anything wrong with using the character, but it remains an odd choice when villains like the Penguin or Two-Face haven’t been used yet.  I’ll bet Mr. Freeze has some interesting thoughts about marriage vows for instance.

The larger issue with the use of Anarky is that his involvement here is largely perfunctory.  He’s taken down without much of a fuss by Red Hood.  No real time is taken to flesh out the how’s and whys of Anarchy’s plot in this story, and it feels more like an inconvenience than any real sort of threat and adding a connection to the Joker feels tacked on.

Jason’s involvement in this issue similarly lacks any sort of weight.   The sole focus of this issue seems to be Bruce getting Jason to give Selina a worry-free night of dancing, and that’s fine, but the issue doesn’t focus on that either.  An issue like this should be focused on the relationship between Jason Todd and Batman.  Jason has often been the odd man out in the Bat-Family, and at a potentially major shift in Batman’s life, its weird to me that Jason’s take on this, and his sometimes-strained relationship with Bruce is not more of the focal point of this issue.

As it stands, Jason is just there doing stuff.  There are moments of the story I did enjoy, don’t get me wrong, like Jason playing on the fears of the “anti-feminists” and using his reputation and rumors about his death and resurrection to interrogate them was entertaining and I loved Bizarro referring to himself to being the lovechild of Superman and a block of Feta.

As for the art, Otto Schmidt’s art in the epilogue remains spot on.  I typically enjoy Javier Fernandez’s work but found it to be rough and unfinished in this issue, which comes as no surprise as Hugo Petrus jumps in for pages fourteen to sixteen and then eighteen.

Final Thoughts: This book suffers from a severe lack of focus.  Is this an Anarky story, a Red Hood story, or is this just about Catwoman getting a night of dancing?  I’m honestly not sure.