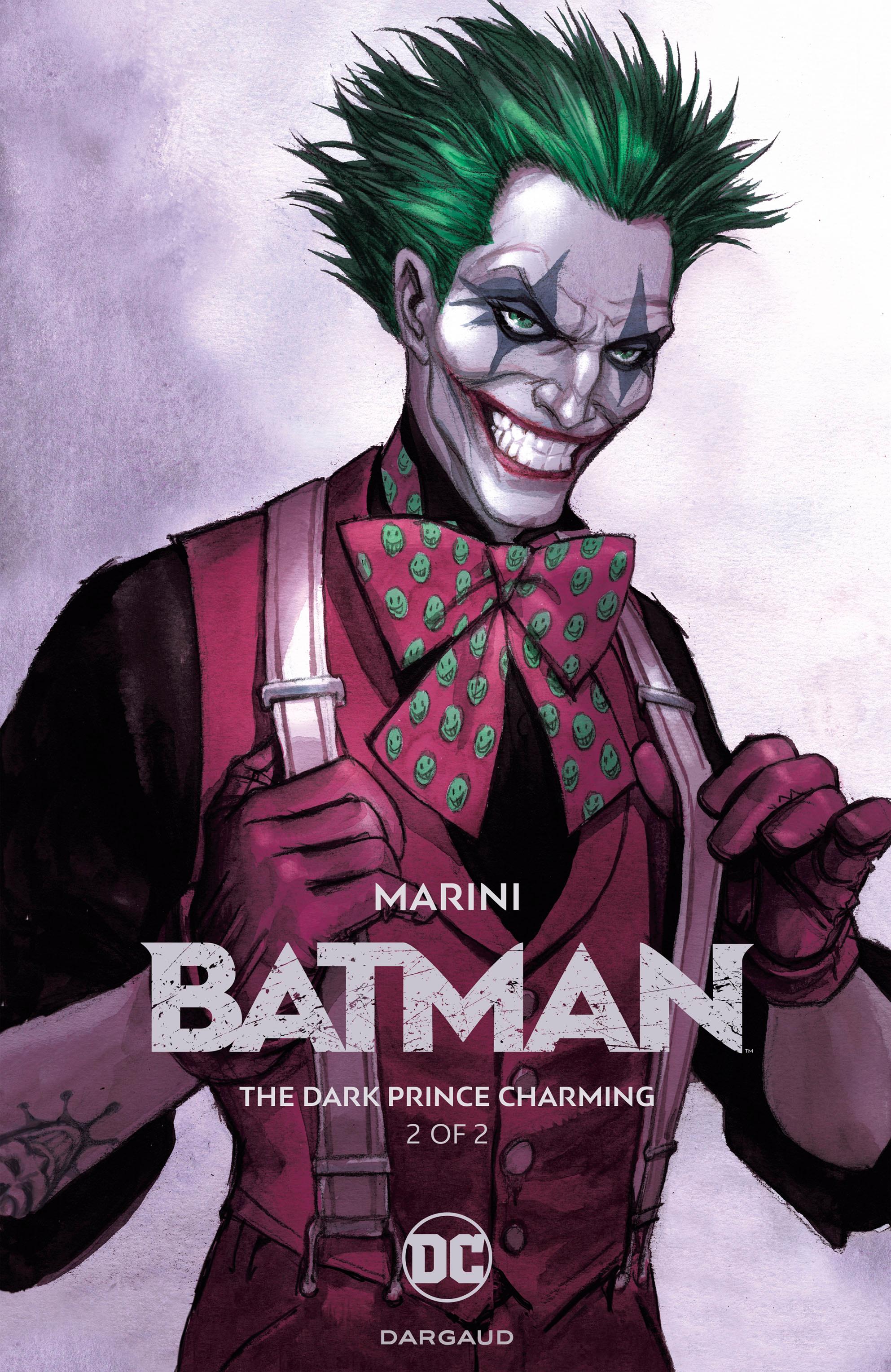 Editor’s Note: The first volume of this series released in November 2017. So if you are forgetting what occurred, refresh your memory and check out our review of the first book.

Overview: It’s Batman vs. Joker with Alina’s life at stake.

Synopsis (spoilers ahead): The story opens with a flashback from nine years ago. A beaten Bruce Wayne is buying a drink from Mariah’s bar. Fast forward to present day, and Batman is in a motorcycle chase with members of a Joker inspired gang while trying to get information on Joker’s whereabouts. The interrogation doesn’t lead anywhere as none of the members have any information to share. Meanwhile, Joker is at his hideout and celebrating by playing the piano. Harley tries to convince him to share a meal with her but he leaves in annoyance. The henchman Archie takes the leftovers to the captive Alina and she manages to kick him and escape the room.

At the hospital, Bruce is at the bedside of a comatose Mariah and promises to save Alina. He instructs the doctors to do whatever is necessary for her because he will cover the costs. As he leaves, he is swarmed by the media hurling questions at him. As the media chase after his car, Joker looks on from a distance and says that Bruce needs to repent. Alina’s freedom doesn’t last long as she soon runs into Harley who takes her back to her cellar after telling her not to get too close to the Joker.

Bruce is in the Batcave trying to find a connection between Alina and Joker when Alfred hands him an invitation sent from Joker to Bruce asking for Bruce to meet him at the old bar. Bruce goes to the meeting, Joker shows him a video of Alina being held hostage and demands that Bruce purchase a specific diamond as ransom for Alina. Joker forces Bruce to drink a tranquilizer so that he can’t be followed. Bruce attends the auction and places bids on the diamond. However, he is distracted by the appearance of Selina Kyle and loses the diamond to another bidder. Selina chooses to use that moment to make her move, she steals the diamond and flees.

Bruce tracks her down as Batman and tries to convince her to hand it over. She tries to fight him, but Batman grabs the diamond and goes to meet Joker leaving a confused Catwoman behind. Joker calls Bruce and tries to tell him where to meet him but the phone line breaks up before he can give the address. Joker is furious but is distracted when Archie tells him he has hired new goons for him. Joker gives them instructions to bring Bruce to him alive if he comes looking for him and he also tells them to kill Batman if he shows up. Meanwhile, Batman uses video enhancement technology on the footage of Alina from Joker’s phone to deduce where Joker is holding her captive.

Batman makes an aggressive entrance at the old power station using the Batmobile and he takes out all fifteen of the hostiles before getting to Joker. While he is doing this, Catwoman has followed Batman to the station and is outside wondering why he would bring the diamond here. Joker sneaks up behind a wounded Batman and uses a thin blade to stab him under the arm. It doesn’t slow Batman down much as he quickly takes Joker to the ground. While Batman is distracted, Harley hits him over the head with a baseball bat from behind, stunning him for a few seconds. Harley takes the diamond off Batman while he is down and celebrates with Joker. The celebration is short-lived as Harley and Joker have an argument and Joker tries to shoot Harley. The bullet misses only because Catwoman tackles Harley in a successful effort to steal the diamond from her neck. Alina pickpockets the Joker while he’s distracted and pokes him with his own poisonous device. She also has the antidote tube and throws it out a window. Joker leaps out after it and is lost in the waters below.

As the police arrive, Catwoman decides to leave with the diamond and Batman doesn’t pursue because he has to make sure Alina is safe. As Bruce Wayne, he takes Alina to the hospital to visit her mom and returns her old toy to her. Commissioner Gordon stops by to talk and tells Bruce that there was no trace of the Joker’s body and Harley and Archie are missing.

Back at Wayne Manor, Alfred gives Bruce a present from the Joker with a creepy message to kiss Alina for him. Alina comes into Bruce’s study and asks him to tell her a story because she can’t sleep. He takes her to her room and promises to tell her a Batman story.

The story flashes back again to nine years ago and a young Joker enters Mariah’s bar and asks for a drink.

Analysis: After reading this issue, I can say that I’ve never felt so conflicted between how I feel about the art and writing of a book. This book has arguably the best art of any Batman book in recent memory. I’ve already mentioned in my previous review how great Marini’s characters look and how their designs draw upon different parts of the Batman universe for inspiration. Right from the beginning, there’s a beautiful panel of an overhead shot of Gotham. The city feels alive and projects the energy befitting of such a grand setting. I’m not exaggerating when I say that about half the pages and panels of this book are worth purchasing as prints and hanging on your wall. The action sequences are amazing, particularly the one at the station. In many ways, it is very similar to the great warehouse scene from the BvS movie, right down to Alfred taking control of the vehicle and Batman shooting his grappling gun through a henchman’s leg as he drops down from the shadows.

Unfortunately, the writing isn’t quite up to the same standard as the art. One of the problems I identified with the first issue, the portrayal of female characters, is even worse here. All the female characters in this story are shallow, two dimensional and objectified by male characters. Marini’s version of Harley Quinn might be the worst version in the character’s history. She serves no purpose in this story other than to be eye candy to the Joker and be the target of his sexism. Harley, as a psychiatrist prior to her relationship with the Joker, is a character who is supposed to be someone who is intelligent. Here, she does not even know the difference between Stockholm Syndrome and Lima Syndrome. She displays no intelligence whatsoever and is instead more preoccupied with bizarre jealousies and behaving like an incarnation of the most negative stereotypes of women. There is a particularly disturbing conversation Harley has with Alina where she hints at being worried that Joker is falling in love with Alina and threatens Alina to stay away from Joker. Given the fact that Alina is a child of no more than nine years old, this is quite disconcerting. This dynamic was hinted at in the first volume but is quite explicitly referred to here. I’d like to think this is not what Marini is implying, but it’s impossible to read any other interpretation from the script.

Selina also doesn’t have any real depth in this book either. She gets more action sequences, including one against Batman, but yet again she is portrayed as solely a distraction to Batman and Bruce. Bruce messes up at the auction because he is distracted by Selina’s exposed tattoo on her lower back. It’s really hard to accept that Bruce allowed himself to be distracted by something so trivial with the life of a young girl who may be his daughter at stake. But once again, it seems as if the female characters in Marini’s story only exist to get in the way of their male counterparts. It’s not only the female members of the main cast that have to suffer this treatment, but also the supporting characters. The waitress at the bar during Bruce and Joker’s meet up is subjected to ruthless body shaming. I understand that it’s the Joker, the villain, doing it which means it’s not an act that is supposed to be “good”, but it still seemed wholly unnecessary and only looks worse given how women are treated in the rest of the book. The Joker’s villainy has already been established, we don’t need cheap, callous remarks to drive that point home.

Aside from the two-dimensional nature of many of the characters, the dialogue is also awkward in many places. The voices of some of the characters are inconsistent and that can really take the reader out of the story. For example, when Catwoman steals the diamond from Harley and Joker demands she return it, why does he threaten her with a “spanking”? Seems incredibly awkward and like a relic of a less enlightened era. The ending of the story is supposed to be a twist that leaves it open to the reader that Alina could either be Bruce’s daughter or the Joker’s daughter. However, Bruce continuing to try and discover a connection between Alina and the Joker after he did a DNA test on her blood in the previous chapter leads me to conclude that Alina is quite obviously Bruce’s daughter. We never learn the results of the DNA test, but I doubt Bruce would continue to look for a connection to the Joker if the DNA already indicated as much. I think there’s the structure of a decent detective story in here somewhere but it’s really hard to see it through many of the things I’ve already mentioned.

Final Thoughts: A visually stunning book marred by a clunky script and an abundance of sexist stereotypes and casual misogyny. This book is an artistic masterpiece, which is what carries my rating, but I want to be clear that the some of the awkward writing and the poor treatment of female characters was a big issue for me.