Review: Batman: Sins of the Father #6 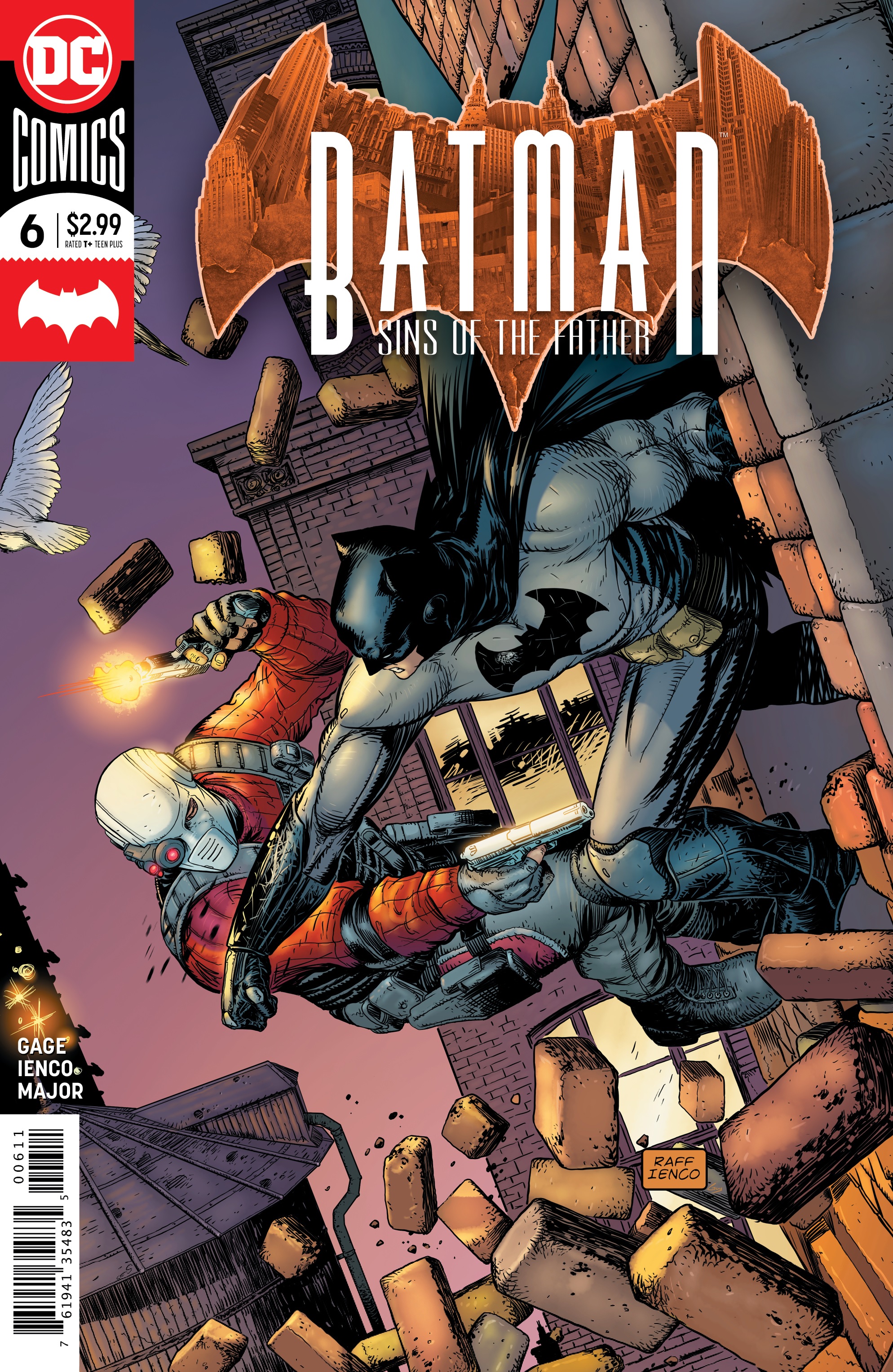 Overview: In order to save Alfred and a group of hostages from Deathstroke, Batman must make a choice to go against one of his most important rules.

Synopsis (spoilers ahead): We open the issue on Batman and Deadshot at a standstill as the villain has a gun pointed at Alfred’s head, a detonator in his hand and explosives wrapped around Alfred’s stomach. Batman tries to talk Deadshot into freeing Alfred, saying that the butler was planning on turning Thomas Wayne in for his crimes on the night Thomas and Martha were killed. Deadshot appreciates the effort but calls it a case of “too little, too late.” During the conversation Batman is using the lenses of his cowl to blink out a morse code message to Alfred, telling him to strike at just the right moment. Alfred shoves himself into Deadshot while Batman fires his grappling hook at the detonator. Deadshot, however, is too fast and the grappling hook hits his gun instead.

Deadshot tells Batman to keep the gun and makes him a deal. He will let Alfred go if Batman uses the gun on Deadshot. The villain tells Batman he remembers the disgust Batman showed the last time he had a gun in his possession and correctly deduces that Batman is against guns of any kind. Deadshot wants to prove that his brother was wrong and there are no heroes in the world, and Batman shooting him would prove this point. Even with Batman in the world, it still doesn’t stop all the bad things that happen, including people like Floyd Lawton being abused by horrible parents with nobody there to protect him.

Lawton begins counting down from ten during which Bruce flashes back to the shooting of his parents, the very moment a gun forever changed his life. As the countdown continues Batman raises the gun and just as Floyd reaches “one” Batman fires. Only he doesn’t hit Deadshot, instead, the bullet hits and destroys the detonator. Batman swings in and kicks Lawton off his feet while telling Alfred to free the rest of the hostages. Alfred complies and Batman disarms Deadshot with two Batarangs.

Deadshot questions how Batman could use a weapon he despises and Bruce explains that guns are the tool of his enemy and he knew he’d need to be able to use such a weapon against them, by learning how to use guns better than those that would use them to do harm. As Lawton tries to take a final shot at Batman, the Dark Knight knocks him out of a window and catches him with a grappling hook, leaving him hanging for the police.

Days later at Wayne Tower, Bruce is finalizing the payments to be made to those who were victims of Thomas Wayne. In a conversation with Lucius and Regina we learn that while the board was initially wary about paying the victims, their salaries would not be impacted while the money will be offset by new developments from Lucius and his team.

We cut to the Batcave where Bruce chides Alfred for not resting. The two converse about how Bruce has stepped out of his father’s shadow to become a truly good man who is no longer controlled by the sins of Thomas Wayne. Bruce thanks Alfred for being more of a father to him than Thomas ever was. The topic of conversation turns to Lawton who Alfred is worried won’t face justice. Bruce assures him that what the judge in the case has planned for Lawton will be fitting for the criminal.

We end with a scene at Arkham Asylum where Lawton is being held. A face from the shadows makes him an offer. His freedom from the asylum on the condition he joins a certain squad. He’s warned though, the job might be suicidal.

Analysis: I’ve got to say this issue was a bit of a letdown after the previous five issues built toward a great moral conflict between two men who were essentially two sides to the same coin. I expected the final confrontation would play off both characters really digging into the legacy their respective fathers left behind. Instead, we got a bit of casual dialogue between the two that rehashed previous issues culminating in a short action scene and all the loose ends being neatly tied up.

The final resolution of how Bruce Wayne sought to make restitution to those impacted by the crimes of his father, simply paying them off, didn’t seem to have the desired impact. It was as if Bruce used his father’s money to make everything better. We know Bruce isn’t exactly spending all his time at the company as Lucius and Regina seem to run the day to day, so it just struck me as a bit of a hollow gesture, especially as everyone was quick to point out this wouldn’t have any long-term impact on the financials of Wayne Enterprises.

What I really did enjoy this issue was how Deadshot tried to use Batman’s aversion to guns to his advantage, calling into question Batman’s hard-line stance to never use the weapon. For the briefest of moments, I did think that Batman was going to shoot Deadshot, which I think is more a testament to how this version of the character and the world around him has been created by the folks at Telltale Games as well as writer Christos Gage. It did make perfect sense that Batman would be trained to use a gun and even be a remarkably good shot, so much so that he was able to take out the detonator without hitting Deadshot or the hostages. That was a true moment of drama in the issue.

Overall the series lived up to the quality set forth by the games it was based on, giving us a new take on Deadshot, forcing Batman to make certain choices, and also expanding about the fallout caused by the actions of Thomas Wayne. It helped to have Deadshot as a foil to Batman as he explored these issues, letting us as the reader see a glimpse of what Bruce could have become if he let anger take hold of him, or even more accurately if he didn’t have Alfred stepping in as a father figure to Bruce.

One thing that did bug me a little bit was how the end hinted at Deadshot being recruited into the Suicide Squad, which goes against the established canon of Amanda Waller in Batman: The Enemy Within being part of the Agency, a government organization that didn’t have such a squad. It begs the question that if Waller did put together a squad, why were they not used to stop the Joker in the second season of the game? It’s a small complaint, and similar to why the Justice League doesn’t swoop in every time Batman has a crisis, but just wanted to put it out there.

Final Thoughts: The finale of the series was a bit of a letdown after an otherwise entertaining run. Everything was wrapped up very neatly and a little too quickly, like putting the toys back in the toy box after playing with them.