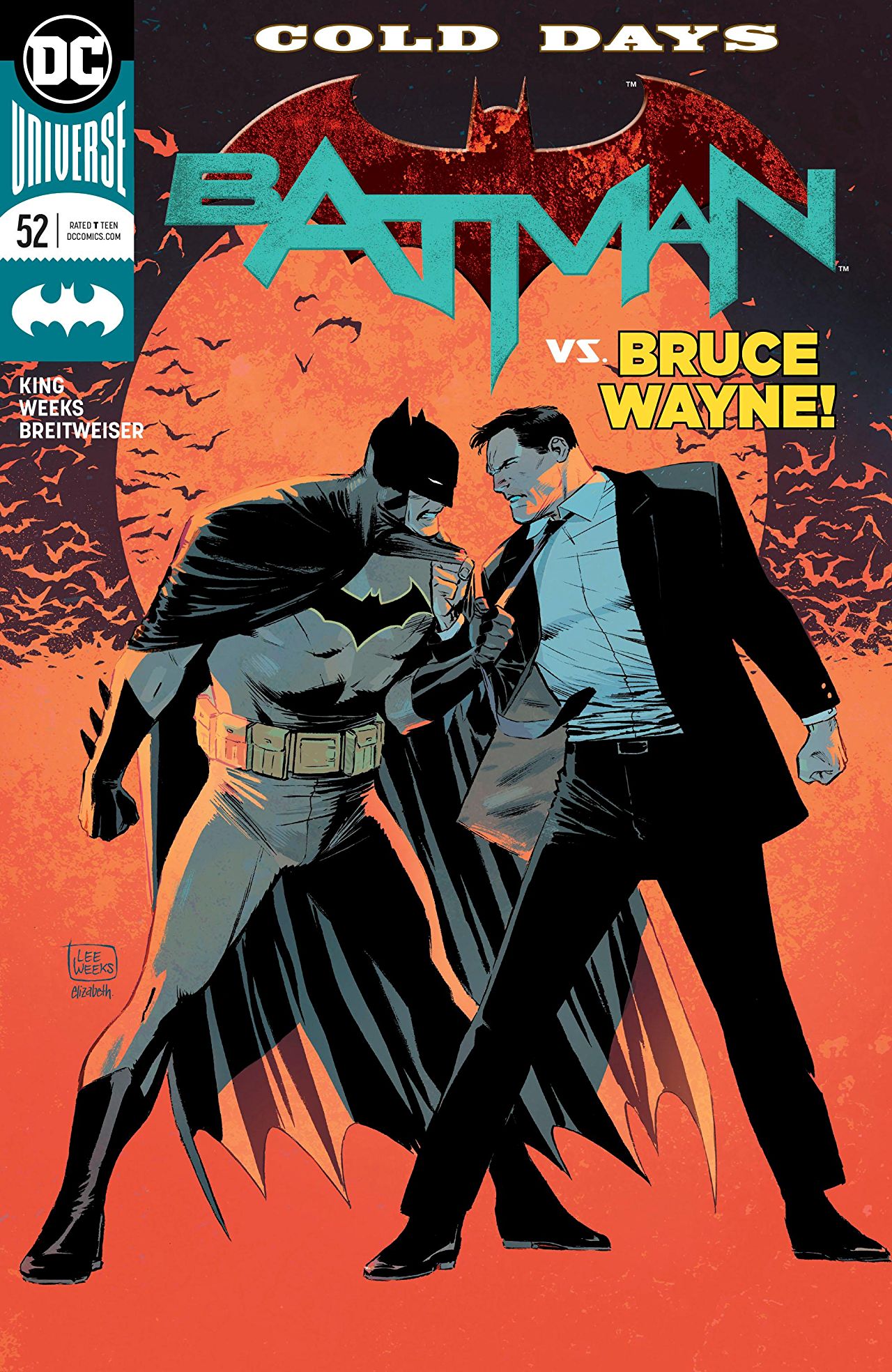 Overview: Bruce Wayne stands alone on the jury…in his condemnation of Batman!

Synopsis (spoilers ahead): The jury leader summarizes the three points condemning Mr. Freeze for the murder of three women – 1) lowered brain temperature leading to death in all three victims; 2) Freeze broke probation by arming himself with suit and gun; 3) Freeze confessed to the police while Batman was not present. The other members of the jury, frustrated at Bruce, who can afford to lose money, wasting all their time. Bruce agrees with the three facts but wants to put them in context. He asks for a few hours, and if he can’t change their minds, he’ll change his vote.

In flashback, we see Bruce swinging out from a building as he chases the fleeing, armed Freeze.

Another jury member starts with the method of death, and Bruce says that Freeze’s life is at stake, so it’s not a waste of time. Bruce pushes on why the police missed the cause of death. Another jury member says that it’s because he’s Batman, and he’s better. Bruce presents another case – someone tried to frame Freeze by altering the bodies between the police’s first examination and Batman’s examination. He argues that everything relies on the assumption that Batman is super-competent.

Bruce begins to examine the second fact – Freeze armed with suit and gun, violating his probation. Freeze’s explanation was that he was afraid of Batman. The jury believes that only a guilty man fears Batman – but Bruce pokes at that, another assumption. Bruce argues that the suit and gun could equally be defense as guilt, and an equal chance isn’t “beyond a reasonable doubt.”

Finally, Bruce gets to the confession. Another juror anticipates his objection – saying that he confessed for days that he killed the women, without Batman present. Bruce draws a parallel between the fear he felt when his parents were murdered – fear that stayed with him after the event – and the fear Freeze feels about Batman.

The juror who spoke up against him stands up, and points out angrily that all of Bruce’s objections only work if you’re assuming that Batman is wrong, bad, incompetent, horrible, out of control – not a hero. She challenges him to prove that – and Bruce says he can.

Analysis: Tom King’s inspiration from the classic film 12 Angry Men shows much more strongly this issue, as Bruce takes the Henry Fonda role in questioning each piece of evidence methodically, unraveling the seemingly perfect case against Mr. Freeze. This issue works better with a few rereads to let the emotions and power of the artwork sink in. On first reading, nothing much happens, everything basically just showing the battle in the past between Freeze and Batman while in the present Bruce presents his increasingly ludicrous case for Freeze’s innocence. If the parallel to 12 Angry Men holds to the end, Freeze will walk free – but that seems beyond unsatisfying, so hopefully, the finale of this arc in two weeks gives us some kind of solution both to the mystery and to the next step in Batman’s personal agony. Since we’ve read Batman #50, we know that Batman is not functioning normally after his heart being broken by Catwoman (and Bane, unbeknownst to him). But seeing Bruce try to destroy people’s faith in Batman is incredibly frustrating, even if it makes sense.

Lee Weeks on linework and Elizabeth Breitweiser on colors again push this book to many moments of pure beauty, particularly in the flashbacks. Though Bruce occasionally has some odd moments where he looks like he’s rolling his eyes in a close up, the splash pages where Batman swings out from a building behind Freeze, and then when Freeze’s gun hits Batman with a blast of intense blue light are some of the best images of Batman, at the very least in King’s whole run.

During the flashbacks, King repeats his pattern of overlaying dialogue – in #50 and during the I Am Suicide arc, it was with words from letters between Batman and Catwoman – here, he lets us hear conversations between Bruce and other jury members during breaks in the proceedings. However, despite the poetic, spare, and effective dialogue, the lack of image of the jury members to whom Bruce speaks, robs us of the visual connection to the jury as people, instead of abstract expressions of Gotham, robbing the story of emotional immediacy. We only get about eight members of the jury with distinct lines or actions in this issue, and only one of them – the older woman with short hair who consistently pushes back against Bruce’s arguments – has much of a significant role. If the characters were a bit more defined – given small closeup panels inset into the flashback scenes, perhaps (though that would break the visual purity of the images – to which one could also argue the dialogue boxes are already breaking that purity, so why not strengthen the present section with tiny face panels?) – the tension in the room would be more powerful, instead of just an abstract field of battle for King to march his toy soldier ideas onto and knock them over.

The whole issue leads up to Bruce declaring that he can prove that Batman isn’t a hero, but several threads are left untouched. The coldness of the jury room, highlighted many times in the last issue, receives no mention at all. Any alternative explanation for the deaths of the women remains shrouded in darkness. And above all, what will happen next in the overall plot between Batman, Catwoman, and Bane likely won’t be touched for many, many more issues. What we get is a careful look at Bruce’s devastation, and how it appears to be turning him against his own actions as Batman.

Final Thoughts: A deliberately paced look at Bruce trying to persuade the other jury members that his actions as Batman cause more harm than good.