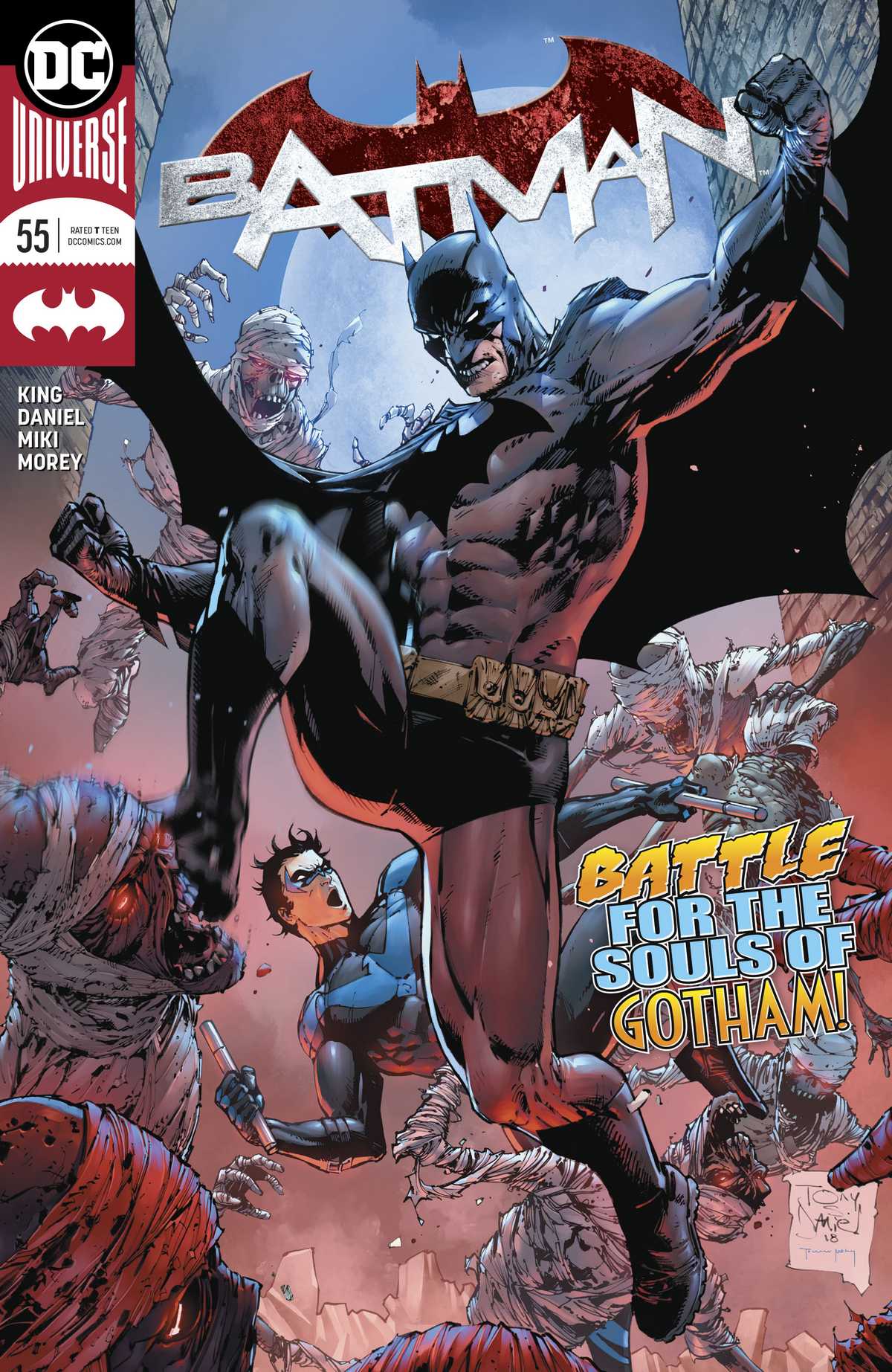 Overview: Batman and Nightwing face the deadly KGBeast atop the roofs of Gotham.

Synopsis (spoilers ahead): A one-armed man calling himself Zimmerman enters Gotham from overseas, claiming to be there on business.

Batman and Nightwing patrol at night, with Nightwing asking Batman if he’s ready for fun – to a decidedly negative response.

Zimmerman checks into a hotel, as the Dynamic Duo fight mummies on the streets. Dick continues to try to get Bruce to make some jokes, to no avail.

At a shady gun shop, Zimmerman purchases a special rifle, while Batman and Nightwing capture the source of the mummies, Phantom Pharaoh.

The next day, Zimmerman leaves a note at a busy hot dog cafe. At night, Nightwing ponders the dual meaning of chum; a friend or smelly fish used as bait. Batman continues to provide little response to Dick’s humor.

At three in the morning, Zimmerman bluffs his way into an apartment building, as Nightwing proposes a contest – perhaps a training exercise, to get the ultra-serious Batman to agree – to jump from the tower, with the last to fire his grappling rope winning. As they fall, Nightwing sings the flying trapeze song.

Zimmerman strangles the occupant of his desired room.

Batman fires his grapple first, in response to the Bat-signal. Nightwing follows.

Calmly, as a dog barks and people fight, Zimmerman sets up his rifle.

Commissioner Gordon greets the Dynamic Duo atop the roof of the GCPD, telling them someone left a note saying “Who’s afraid of the Joker?” Tonight is the anniversary of the end of the War of Jokes and Riddles, Joker and Riddler are both in Arkham. Gordon mentions the one-armed man but has no real leads. As they discuss the case, Zimmerman shoots Dick in the head, then leaves the room, strangled body on the floor.

Analysis: In September’s DC Nation #4, DC’s free publicity and behind-the-scenes magazine, Bat-group editor Jamie Rich revealed that all of the Bat-titles will be building to a tragic Batman #75, five months from now (March or April 2019). After issue #54’s returning warmth between a heartbroken Bruce and almost manic-cheerful Dick, Tom King pulls away one of the last remaining supports for Batman’s heart – his eldest son. Solicitations for the troubled Nightwing title have revealed that the events of this issue will result in Dick losing his memory, which results in the deaths of relationships, as we saw in the New 52’s final arc, Superheavy, with Bruce himself losing his memories. Though speculation abounds with how DC will eventually restore Dick’s knowledge of his family and friends (from Batman’s morally horrific cloning program to the weird mind-invasive cyber/magical criminals Dick’s been facing for the past five months), fundamentally, this issue continues to push Batman down into the darkness.

The devastating effects of Dick’s injury and the corresponding problems caused for other writers suggest that possibly the mandate to remove Dick from Bruce’s life came from outside writer Tom King, as he has said multiple times he doesn’t like to dictate how other writers are forced to tell their own stories. Since the current storyline clearly has editorial weight behind it, it seems possible that there’s a wider story than simply King’s at play. Only the next two years, filling out King’s 103-issue plan will tell.

After the brilliantly crafted Cold Days arc, and the flawed but warm Better Man one-shot, Tom King re-teams with Booster Gold-arc collaborator Tony Daniel for this arc, Beasts of Burden. King uses some of his familiar narrative devices – dual plotlines, the ubiquitous nine-panel grid, and spare, seemingly haphazard but often incredibly carefully chosen dialogue. Some of these patterns work well in this issue, some do not. The nine-panel grid following “Zimmerman’s” path to shooting Nightwing uses all of the tricks you’d find in a Hitchcock film – tension, holding on shots for emotional effect, sharp, jagged images to emphasize drama and a deliberate sense of pacing that drives the anxiety of a scene even higher. King and Daniel tell the story of “Zimmerman” well – but nothing is revealed about his motives or personality that isn’t fairly cliched for a villain. In the more freely composed Batman and Nightwing sections, King lets his familiar writing style for Dick, first observed when the Flying Grayson interacted with the irascible Tiger, Agent One, as part of Spyral. The contrast between Dick’s desperate attempts to help his father figure heal through humor and the horrific bullet to his head works brilliantly.

A final note – Tom King has mentioned the fact that he couldn’t use the mummy-themed villain he wanted for this issue several times in interviews; instead inventing Phantom Pharaoh. As a result, one of his best puns appears in Nightwing’s dialogue – the villain might be a guy named Tom who is a fan of mummies – the fan-Tom (King). A perfectly composed bit of silliness in a very dark issue.

Final Thoughts: The hole dug for Batman only gets deeper, as the next phase of Tom King’s Batman story gets underway.