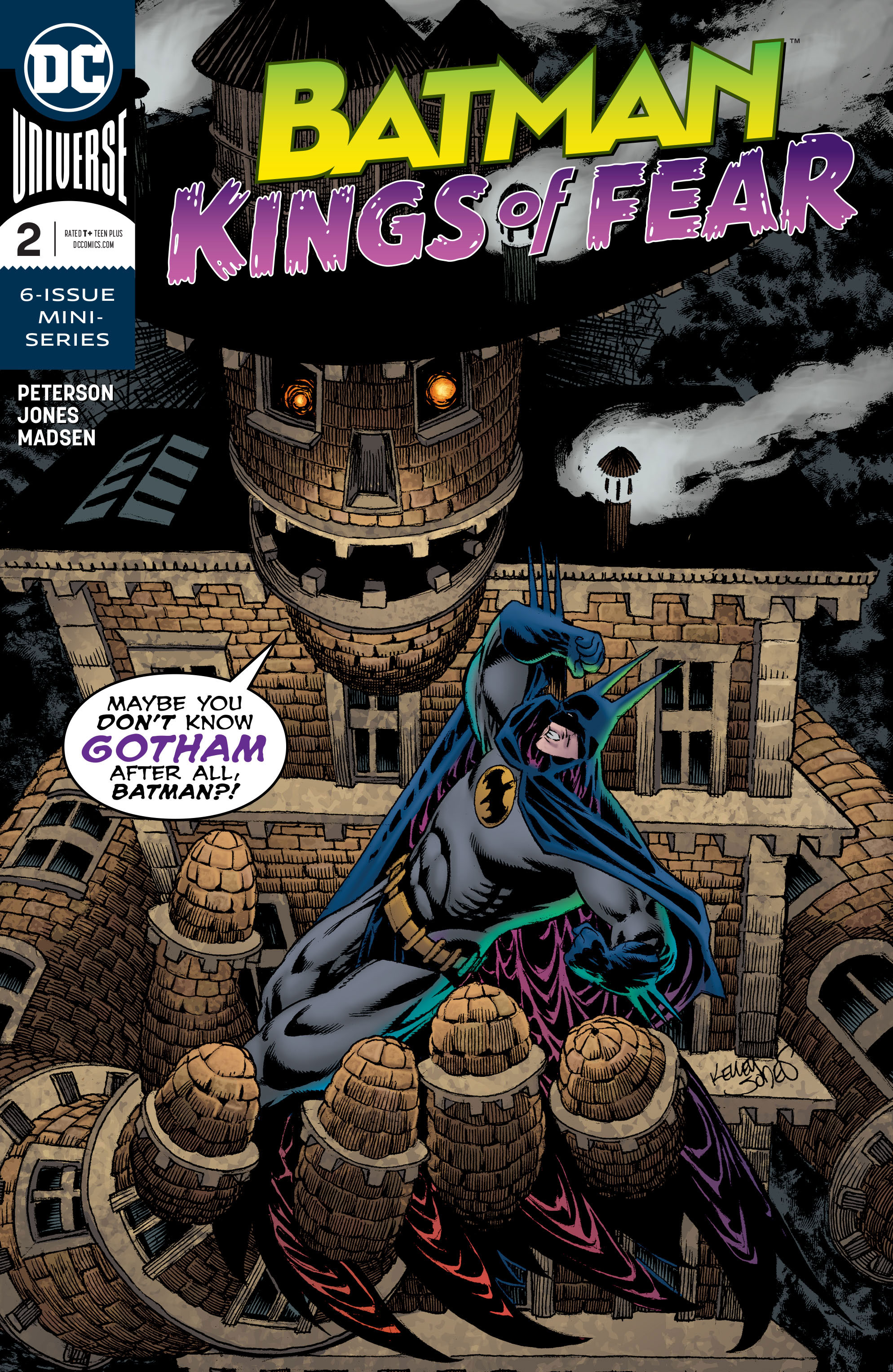 Synopsis (spoilers ahead): We continue with an immediate follow up to the last issue, with Scarecrow getting the drop on Batman. Crane wants to do a word association session and gases Batman on the spot. Batman sees all his fears come to light, replaying in his mind; the death of his parents, the death of Robin, Bane breaking his back, Joker dumping his toxin in the water. Batman is back fighting his entire rogues’ gallery again. He’s surrounded. He lashes out in every direction, but they manage to block each blow. Thankfully though as it is actually Commissioner Gordon he is throwing his punches at. Gordon talks Batman back to reality. Gordon gives him information on the hostage – Kenneth Rhee. He just moved here recently, so they haven’t gathered his home address as if yet. Batman insists to Gordon that he is fine, and drives off. He is able to get the address from Alfred and heads to the location.

Batman sees a mugging on a taxi driver taking place, stops it, and continues on his way.

He sneaks his way through Rhee’s window and immediately dodges a bullet while disarming the shooter. The shooter, after seeing who it was, apologizes profusely. Batman intimidates him, but the man seems genuine. He’s Rhee’s landlord. He hasn’t paid rent this week & he hadn’t seen him in a while, he doesn’t have any visitors; so he thought he’d check on him. Batman leaves before he can finish.

Batman stumbles across a gang with a timid new recruit. He takes them all down and lets the new guy run off.

The building reaches down and grabs Batman, placing him on the rooftop. He sees a series of people holding a gun to his head; Gordon, Alfred, Rhee, his father, and… someone I cannot make out. Scarecrow is suddenly standing in front of him. He tells Batman, ‘You’ve got issues… Major issues. But I’ll make you better.’ as he pushes him off the rooftop.

Analysis: Scott Peterson delivers a much more focused script here in the second issue. We really delve into what this series promised us it would be; a story of Batman’s fears via Scarecrow. Here, we see a Batman that does some detective work, some crime fighting, and that is tripping out of his head thanks to Scarecrow’s new fear toxin. In my opinion, you could easily start the series here, as it has a much more compelling intro. Again, if we circle back around to some themes from the first issue, I’ll eat my words, but as far as I can tell this was a much better starting point. I also want to point out how good a job he did writing a stretch without any dialogue. I like it when writers do that, it shows their trust in their storytelling ability as well as that of the artist to execute it without filling the page up with unnecessary words.

Kelley Jones’ art is still weird to me. I’m sorry, but it’s just isn’t doing it for me. I can get behind the Freeze design (that’s cool), but his characterization and body language are off-putting to me. He definitely times it down here. His poses were still exaggerated, but not nearly as awkward. His anatomy didn’t jump out and slap you in the face, defying reason, and his storytelling was really well done. I even liked his symbolism and hallucinations that he inserted into the book. Although his style is not my favorite, Kelly Jones is not a bad artist. He can do some great things and I can see here where his style can fit a story. Hopefully, he stays consistent and doesn’t revert back to the problems we had in the last issue.

Michelle Madison’s colors are really good. I know that sounds understated, but she’s very talented at balancing out a page. With Jones going heavy on the inks, Madison balances out that time with the vivid use of secondary colors, adding to the eeriness of the book. She also congrats the page well, using complementary colors to balance out the page, as well as making key parts stand out. Rob Leigh letters here, and does a great job. His placement and font were all excellent, and he doesn’t overuse onomatopeias throughout the book, which would be easy to do given the amount of action in the book.

Final Thoughts: In my opinion, this was a much better outing than the last issue. Here, we delve into the meat of the story and Kelly Jones flexes his Batman sized storytelling muscles.