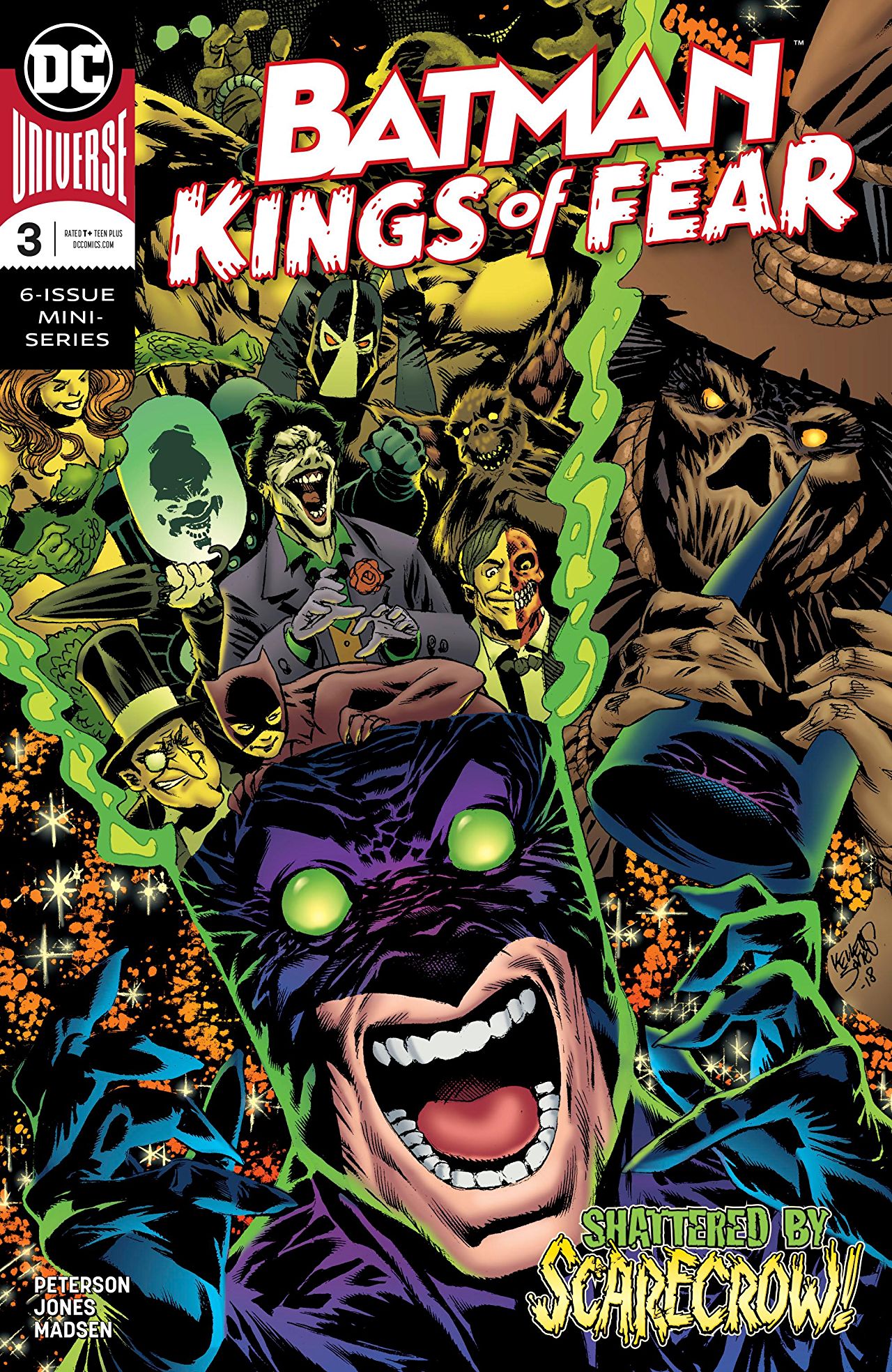 Overview: Batman questions reality around him and is forced to go along with Scarecrow’s method of psychology.

Synopsis (spoilers ahead): Batman plunges into the depths of madness both in the literal and metaphorical sense. Scarecrow laughs as he watches Batman fall, until a line and hook wrap around his ankle, pulling him down as well. Batman pulls him close, takes the line, and uses it a second time on a gargoyle. The two crash through a window and into a building. Crane complains that Batman almost killed him, especially considering the amount of toxin he has in his body. He asks Batman if he is crazy, and Batman tells Crane that he should be able to tell him that. Crane agrees and then wants to observe Batman on a typical night. Batman has to cooperate because after all, Crane has a hostage.

Batman sees a family walking together on a quiet night and follows from the rooftops, being a watchful guardian over them. Scarecrow can’t believe his eyes… THIS is what he does?!… Jumping from rooftop to rooftop… He can’t make that jump. Batman leaps across, grabs Crane, and throws him to the other roof. Batman hurries back to the family to find a man following them. Scarecrow begins telling him how pathetic this whole thing is when, to Batman’s horror, the man robs the family and shoots them, but suddenly everyone is fine. They even have a pizza. Crane tells him that he’s a glorified bodyguard – no, a babysitter. More radical therapy is required. Where’s his car? Here it is! Batman throws Crane into the Batmobile. He messages Alfred, asking him to activate autopilot, but only when he is in the driver’s seat. He’s not quite sure what’s real and what isn’t.

Gordon trails some goons and hear them say that Scarecrow says “this part is all him.”

Crane believes they are making progress. Well, not Batman; he’s clearly not right. But Crane feels like he’s starting to understand him better. Batman shouts “STOP!” and the autopilot disengages, stopping about a foot from a little girl. We have a sweet moment between Batman and the little girl. She went out alone, and Batman convinces her to go back to her house.

Crane appears, “You’re wondering if you hallucinated all that.” “Did I?” “Let’s move on.”

Crane brings him to the room with the hostage. But he’s not going to let him cheat. He’s not going to outmatch him physically and save the hostage that way. He’s going to have to go through with their arrangement. He gases Batman again like he’s repeatedly done throughout the night. Batman’s going to sit on a comfortable chair, talk, he’ll reach a breakthrough, and then Crane will let the hostage go. This is a nightmare that he can’t wake up from. So let’s begin.

Analysis: Scott Peterson delivers an amazing script here, as we really delve into Bruce’s psyche. The scene with Batman watching over the family was a cool moment, and getting Scarecrow’s reaction to it was even better. The moment with the little girl was touching. It was sweet. I just love seeing Batman interacting with kids in this way. It makes him more endearing as a character. The constant play throughout, not knowing what is reality and what isn’t is really cool. I like how Peterson messes with your head in that way. Even more terrifying is how Crane has complete control being in this element.

Kelly Jones’ art is definitely coming into play more and more into the story. Something that works quite well, is that he drew the issues before the hallucination, and now that Batman is hallucinating, you are on the same trip with Batman, not knowing what’s real. His actual character designs still aren’t my favorite, but his storytelling is very good. The way he directs you eyes is masterful. His panel structure was a bit more straightforward here, but I appreciate that. Some get a bit too crazy, and it takes away from the work itself.

Michelle Madsen’s colors are even more extreme here, and I love it. I do believe it has to do with the hallucinations because when it cut to Gordon, the color palette changed to more muted tones. Elsewhere, the comic is very vibrant and colorful. I like the rainbow effect she does, it looks nice with all the heavy inks. The bleeding she does color into color is very beautiful. I really like her style and would like to see more of her work. Rob Leigh letters here and does a fantastic job. Placement, font, and boxes were all solid. Nothing crazy. He kept it simple and kept the focus on the book.

Final Thoughts: I really did not like issue one, and I stand by my thoughts for that issue. That being said, this book has progressively gotten better with each new installment. This issue was absolutely amazing. I really enjoyed reading this and highly recommend it to others.