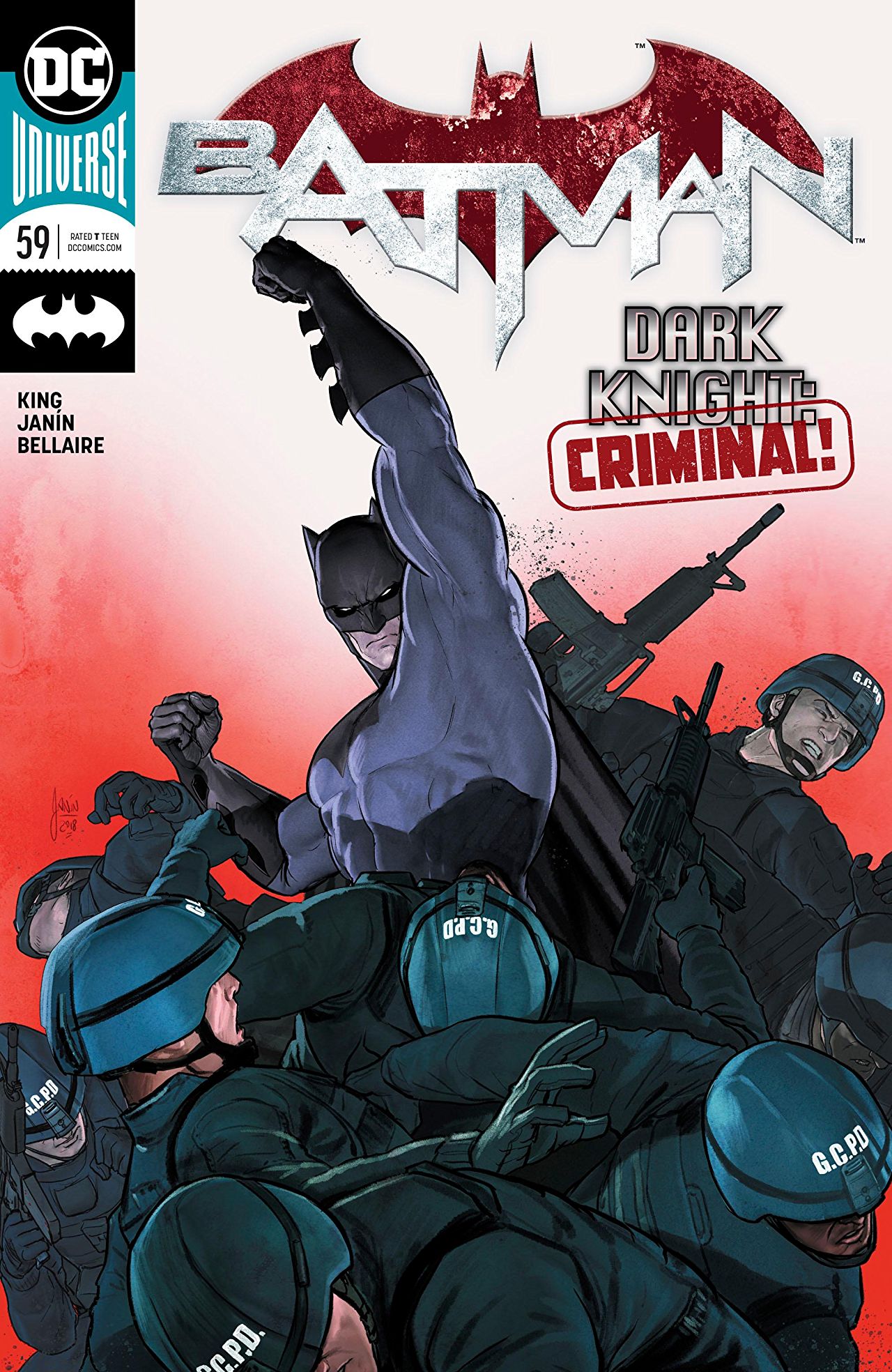 Overview: Batman reels at Penguin’s revelation and the resulting flailing further isolates him from his allies.

Synopsis (spoilers ahead): In the present, Batman breaks into Arkham Asylum, shrouded in blackness.

Earlier, he told Penguin he doesn’t believe the mobster.

Now, he continues past lines of heavily armed guards, intimidating them into letting him pass.

Then, Penguin offered evidence – of the Freeze frame job, and others – claiming that Bane is running Arkham Asylum and Gotham City from inside a cell. Batman insisted that Bane was incapacitated by their confrontation in I Am Bane, but Penguin scoffed at his assertion.

Now, Bane cowers from Batman’s enormous shadow in his padded cell. Batman attempts to force a reaction from the seemingly childish criminal, faking a confidence in Penguin’s narrative. He hurls Bane around the cell violently, as Bane whimpers and cries for his mother.

Previously, as Penguin smirked, Batman said that he doesn’t believe Cobblepot because he’s committing suicide if Bane is as powerful as he claims. Penguin responded that he’s motivated to his betrayal by love.

Now, as Batman continues to brutally beat the unresisting Bane, the enormous but seemingly helpless man continues to beg for mercy. Batman attempts to force a boast, a reaction, anything, to no avail.

Then, Penguin demanded that Batman stop throwing him around. He offered to give himself up to Gordon, knowing Bane will kill him in his cell because, without his wife Penny, life was meaningless.

Now, Gordon bursts into Bane’s cell, and as he tries to restrain a frantic Batman, is knocked to the floor by a furious punch to the face. Cold with rage, Gordon orders Batman out of his sight, or he’ll throw the entire GCPD at him, then the Justice League.

Then, Penguin looked at the portrait of his wife, a tear falling from his single eye, saying he had nothing to prove his love, but everything he said was true.

The doctors in Arkham work to treat Bane from internal bleeding after Batman’s savage beating, as Batman flees, telling Alfred he doesn’t know if he believes Penguin or Bane.

As Bane lies on the gurney, one of his eyes opens, a red slit, and he smiles sadistically.

Analysis: After the emotional devastation of “The Tyrant Wing’s” first issue, it’s a bit of a surprise to see Tom King avoid an issue focused on the Penguin and his wife’s backstory. Despite the lack of elaboration, unless King’s saving a truly absurd revelation, the speculation that Penny Cobblepot was a bird remains a ridiculous fantasy. This issue highlights King’s tendency to favor parallel structures, as Batman breaks into Arkham while we simultaneously see Penguin offer his own death to prove his love for the wife Bane slaughtered. The reference to Batman’s entry into Arkham in “I Am Suicide”, the first confrontation with Bane in King’s run, is clear in Batman’s declarations to the guards, and the bizarre parody of Bane’s beating of Batman in “I Am Bane” reveals how much Tom King is thinking about the connections between issues in this arc, even thirty-odd issues later. Instead of Batman’s headbutt proving the undoing of Bane, this time, Bane deliberately allows himself to be headbutted, and takes his victory from the absolute uncertainty and pain he continues to put the Dark Knight through. The final twisted smile which closes the issue confirms for the reader, but not the protagonist, that Bane is indeed controlling everything – and we can’t help but wonder if he’s even planned for Penguin’s betrayal to further undermine Batman’s confidence.

Mikel Janin’s pencils are dramatically highlighted by Jordie Bellaire’s use of pure blacks to highlight Batman, both an incredibly appealing visual statement, and an indication of how off balance, full of rage and pain, and lost Batman has become. Even though this reviewer has railed in many forums about the problems the double shipping schedule of Batman and many other DC titles has caused, it’s to King and Janin’s credit that they’ve continued to provide solid, if sometimes a bit rushed, work throughout this run of Batman. Hopefully, that partnership will continue to provide a sense of visual continuity through the end of King’s ever-expanding run (King revealed on Twitter that due to a television project, he’s taking the two issues in February off, and Joshua Williamson will write another Batman/Flash crossover. This will extend his run from the originally planned one hundred issues plus three to make up for the two issues by Steve Orlando in Night of the Monster Men and one issue of The Button by Williamson to one hundred plus five, not counting the annuals.)