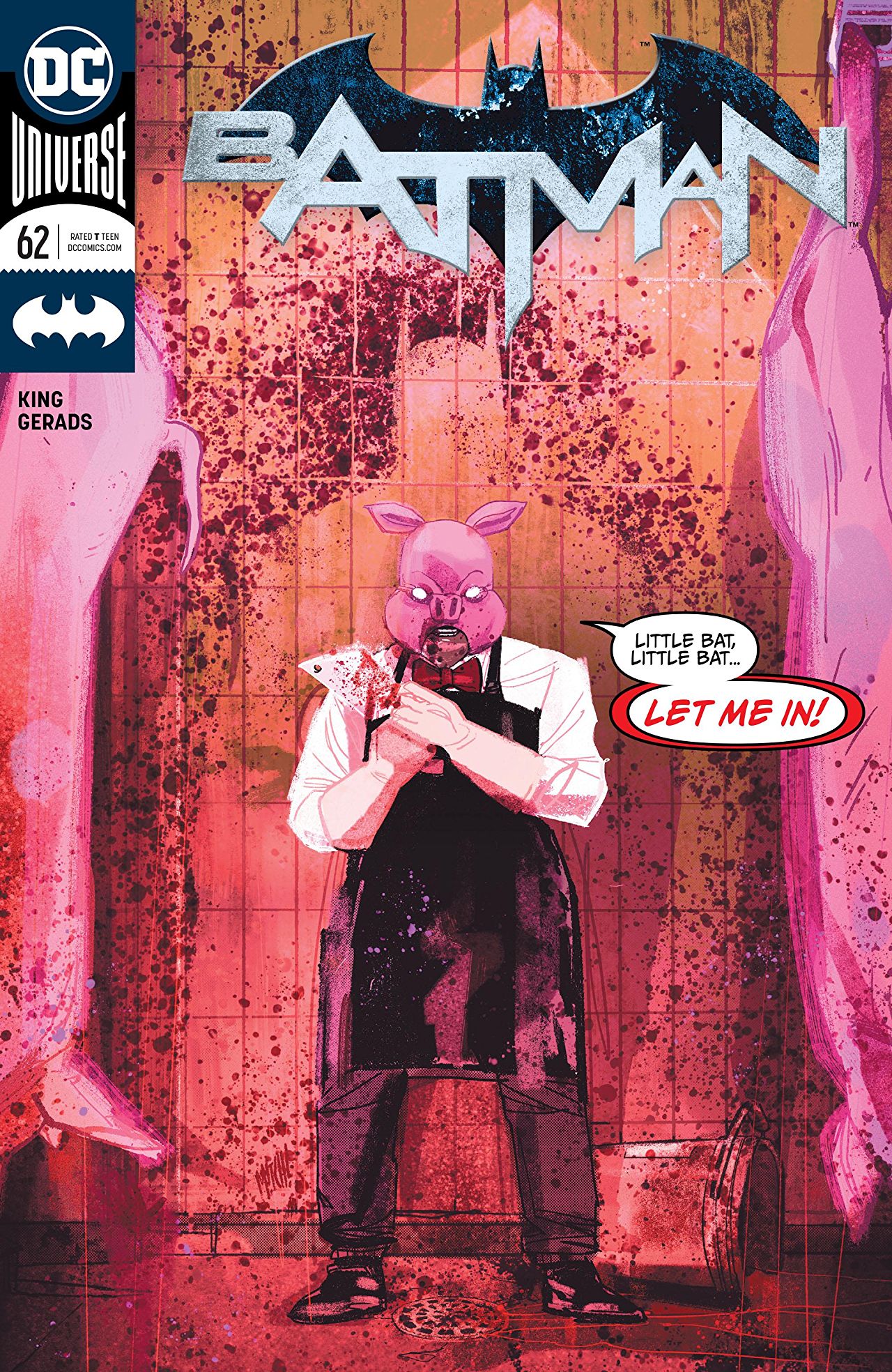 Overview: As Professor Pyg seems to have captured Batman, the World’s Greatest Detective picks at the bloody seams of the world around him.

Synopsis (spoilers ahead): Batman wakes up, forcing his eyes open. He evaluates his situation, seeing Professor Pyg. Hanging upside down, bound by ropes, he plans his escape.

Suddenly covered in blood and screaming, he gains control, working one finger free, using it to use a hidden batarang to saw at the ropes.

Batman headbutts Pyg, his hands-free, and lands on the ground. Though Pyg squeals, Batman can’t hear anything. Overconfident, Batman leaps right onto Pyg’s vicious stab to the belly. Grasping at calm, Batman pulls the blade out, and throws it perfectly, hitting Pyg in the mask with the handle.

Batman looms over Pyg, stepping on him, breaking bones, but pulls back to avoid killing him. He still can’t hear anything Pyg screams. In his confusion, Batman lets Pyg back up and get his knife back.

As Pyg monologues to an unhearing Batman, Batman tries to remember how he got here. His train of thought skips unsteadily from Bane to Penguin, to Arkham, to his quest for the truth of Bane’s control of Arkham, to Alfred on the floor, saying something about his father…

Snapping out of his attempts to remember, Batman hurls batarangs at Pyg, but the villain catches them. Batman remembers seeing red eyes as he turned away from Alfred on the ground.

Engaging in a martial arts battle with Pyg, Batman tries to connect Pyg to anything that came before – Pygmalion, his love for Catwoman, his loss of the family the second time – and the two end, standing in front of each other.

And Batman finally forces himself to speak. “How did I get here? How do I get out?”

Batman looks at the floor as Robin leaves, shaken, evaluating, trying to grasp the metaphor, myth, story, dream of what just happened.

Analysis: After the shattering revelations of “The Tyrant Wing,” Batman faces “Knightmares.” In this second installment, King actually takes us inside Batman’s head in the aftermath of what we assume is an attack by Flashpoint Batman, Thomas Wayne. Though there seems to be an overload of reality-bending and questioning in comics these days (Kelly Thompson using it in both Mr. and Mrs. X and West Coast Avengers, King also employing it in the recently concluded Mister Miracle with Gerads again, the use of virtual reality in Heroes in Crisis, Christopher Priest in Deathstroke employing a trippy blend of VR therapy, drugs, insanity, and possibly spiritual phenomenon, Scott Peterson and Kelly Jones’s Kings of Fear playing with Scarecrow’s fear toxin, and the Young Justice: Outsiders tie-in comic with Psimon and Miss Martian’s psychic powers), King and Gerads use the trope of someone struggling in a dream reality fairly well here. Gerads employs a brilliant vivid but sickly yellow and black color palette along with his commonly used splatter and shadow double techniques to suggest reality shifting in and out of view, bleeding over the lines and gutters that we use to define what is real and what is not.

King’s script, even granted King’s lack of verbosity, features just one actual exchange of dialogue, a powerful effect. Batman’s frantic, disjointed inner dialogue contrasts with his single desperate question, and Pyg and Robin’s cryptic, useless and yet useful response. The theme of family – Father – Flashpoint Batman – and children, his youngest son Damian, all of his children, his lost love Catwoman, his surrogate father Alfred – dominates Batman’s mind. The interesting use of the Greek myth of Pygmalion – creating a loved one (incidentally, one of the parallel myths to the original origin of Wonder Woman, sculpted out of clay by her mother to be loved) suggests a somewhat unhealthy attitude towards those in his life he loves. It’s more than a bit solipsistic to think one has created the love of the people in your family – and yet, given the amount of training and worry Batman has for his sons, daughters, partners, and parents, it makes some sense, especially for someone defined by the loss of parents so early in life. An attempt to make sense of trauma, grasp at potential happiness and never let it go, even when it’s already gone.

What happens next? King has revealed the entire list of artists for this Knightmares sequence – Travis Moore and Mitch Gerads for these first two installments, Mikel Janin coming in two weeks. Then two issues of Batman paired with two issues of Flash, all written by Josh Williamson, in a cold case likely tying to The Button. Then back to Knightmares, with #66 by Jorge Fornes (who helped finish Tyrant Wing with beautiful, bold linework), the brilliantly Mazzucchelli-esque Lee Weeks, a surprising appearance by Amanda Conner, and wrapping up with Yanick Paquette at #69. Janin’s colder, much more clinical style will be quite interesting in this type of story, as Batman struggles to detect what Flashpoint Batman and Bane have done to him.

A note on the covers – Gerads provides the main cover, with a very clever use of his splatter technique, framing Pyg with a splatter-outline of Batman’s silhouette (unfortunately slightly disfigured by the ridiculous word balloon editorial feels it needs to throw on the main covers these days). Frank Miller returns to provide another alternate cover, with a surprisingly emotionally affecting portrait of Batman. Instead of his usual gritted teeth and anger Dark Knight-rendering, Miller provides an intensely melancholy expression and body language, with holes and slashes all through the cowl and cape. The dashes and strokes of ink making up the shadow behind Batman catch the eye in a really lovely fashion, making the choice of covers a difficult one.

Final Thoughts: Batman’s Knightmare continues as he struggles to make sense of a world that’s been spinning out of control since issue one.