Review: The Batman Who Laughs #2 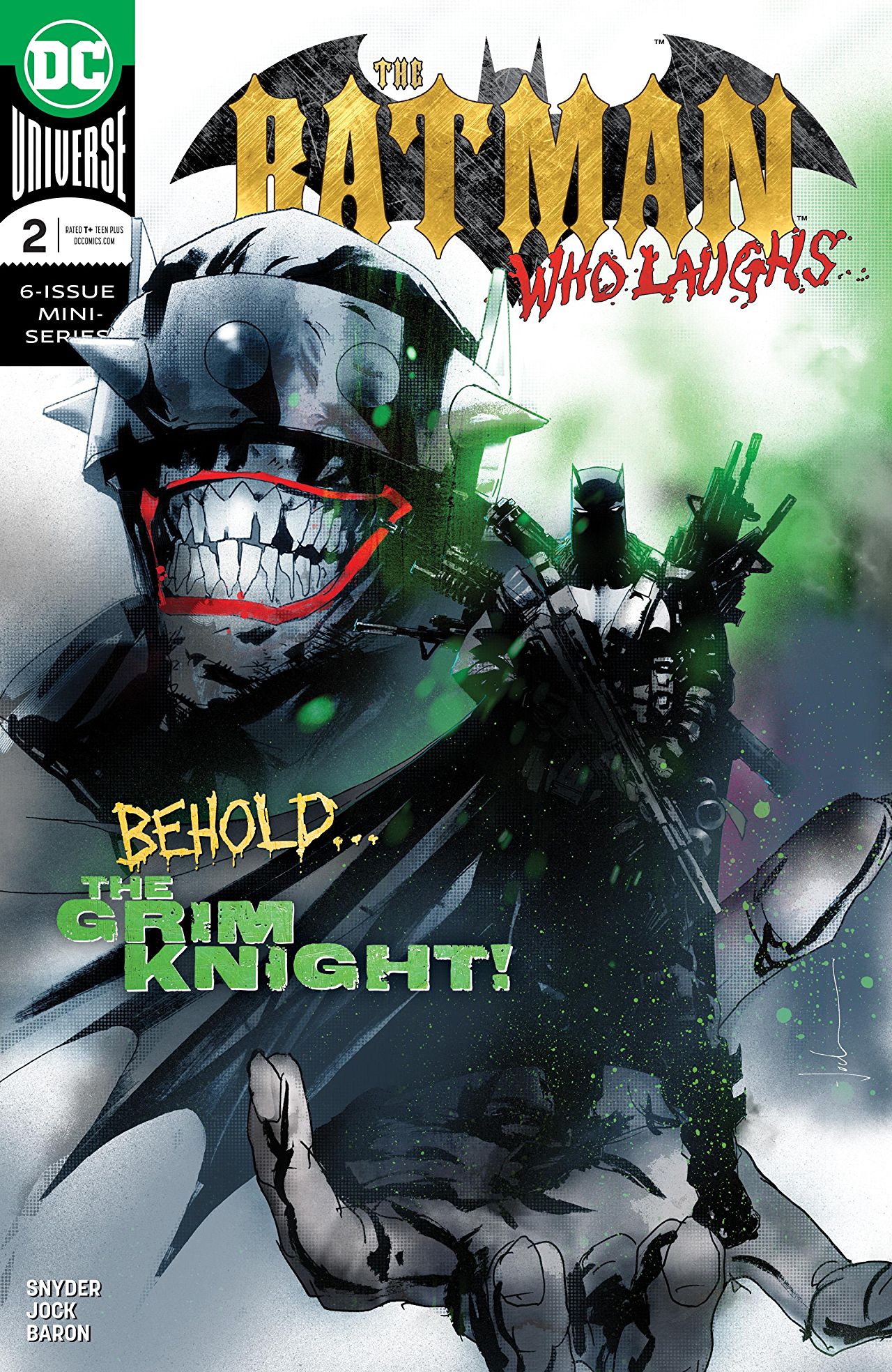 Overview: While staving off the Joker toxin, Batman is shot trying to stop the Batman Who Laughs from collapsing Wayne Tower.

Synopsis (spoilers ahead): As Bruce watches Alfred operate on the Joker, he is reminded of how other cultures view the heart. When he was training and traveling the globe, he was struck with how many different cultures believe the heart is the location where happiness lives. There is science, however, which states happiness and joy require more blood than other emotions. The heart is the thing you reach for when you are scared. You instinctively protect your heart, the home of happiness, instead of covering your more exposed arteries.

As Joe Chill raised his gun in the alley where his parents died, Bruce remembers his father protecting Bruce’s little heart. His father’s fingers were like extra ribs — filling in the spaces in Bruce’s rib cage. When Joe Chill pulled the trigger, Bruce thought he had been hit, but his heart just skipped a beat. His father’s hand fell to the ground, and everything was different. Bruce states he feels like he has lived his whole life in that missing beat.

Alfred tells Bruce the Joker is not going to make it. He states the whole cavity is filled with blood. Bruce tells him to keep suctioning the blood. Alfred comments at a moment like this, where he has the Laughing Demon’s chest opened before him, is a crossroads for Gotham. He tells Bruce he would not be killing him. Not saving does not equate to active murder. And if he did want to keep him alive, Alfred could drug him to where when he wakes, he would not be able to see or move.

Bruce states he understands how much he wants Joker to die, but Alfred must not let him die. To be frank, they have a bigger problem than the Joker. And the only way beat the Batman Who Laughs is to stay true to they are, whatever it takes.

Alfred asks how the serums are working since being exposed to the Joker toxin in the Joker’s heart. Bruce says he is using all the Joker toxin antidotes they have. If he uses them daily, he should be able to stave off the transformation a week or two. Alfred says that that is not a way to live. Bruce tells Alfred to shut up and get back to the clown.

Bruce apologizes for his outburst. He is just worried because of this other Batman. It is unnerving to see himself at the end when he had stopped the Joker for good. This Batman Who Laughs knows everything he knows and has gone through everything he has gone through. In his opinion, this Batman has no weakness. There has to be a way to beat him, and the Joker is his only hope.

All the sudden, Joker laughs. Bruce is caught off guard, but Alfred reassures it was just a physical response. It means he probably will live.

Commissioner Gordon and Batman (as a disguised Harvey Bullock) investigate a crime scene where an alternate version of Bruce Wayne fell onto a lady’s car. Gordon comments that this man fell from a height not even possible in Gotham. Batman says, “Welcome to Tuesday in Gotham City.”

Gordon says these Bruce Waynes have unstable cell structures — kind of like Dark Matter. Gordon asks Batman what is going on. Batman hypothesizes they are from some other dimension. The Batman Who Laughs is pulling in these Bruce Waynes. It is plausible he is pulling them through from where they are in their world. If that is the case, then this Wayne was high up.

Gordon asks if Batman is okay since he usually is not so off. Batman reassures he is fine and returns to the victim. Batman says each of these Waynes lived a different life. One was married, one had children, and this one was mayor. Batman mentions this Wayne retired from being a playboy around the time Jason Todd died. He had a speech in his pocket, apparently celebrating the signing of a federal energy contract. He was celebrating on his blimp when he came through.

Gordon asks why this monster is pulling in other Waynes. Batman says the Batman Who Laughs beat them there. This Wayne has a puncture wound near his heart. It seems he took a blood and tissue sample from this dead Wayne. Batman says cardiac blood is some of the last cells to die. He is using the cells to make a serum. It seems he is making a serum that will infect their cells with Dark Matter changing them to the darkest versions of themselves.

Gordon begins to tell Batman about somebody who might be able to help them, but he is unsure. As Gordon is telling him this, one of the local cops calls out to Harvey and tells him about pool based on the three buckets he mentioned the other night. Bucket 1, the Grim Knight takes down the bat. Bucket 2, the laughing one takes down the bat. Bucket 3…Batman grabs this man by the collar and yells that they are discussing a case. What is so important about bucket 3?

Gordon pulls Harvey (Batman) away from this cop. Gordon acknowledges Bullock belittles Batman at the station to make the other cops feel important. But, Bullock does believe in Batman and his mission. He asks Batman what his deal is. He knows something is off with him and offers to help.

Batman tells Gordon there is something he must show him. There is an old map of Gotham. In 1780, a plague wiped out a third of the city. The founding families vowed to never let this happen again, so they built a defense system in the city, called the Last Laugh. Last Laugh was a way to easily disperse a cure/vaccine/antitoxin to the city at large. He learned about it when he fought the Owls. After the last Joker attack, he built his own version of the Last Laugh. This version is a defense against any chemical or biological attack, a way of sealing off the city, and purifying Gotham’s air and water. He tells Gordon the central hub is in Wayne Tower. Gordon guesses the only people with access are him and Bruce Wayne.

In Wayne Tower, the Batman Who Laughs enters the penthouse and effortlessly kills all the staff. Batman crashes through the window and attacks this monstrosity. After getting the upper hand on this other Batman, Batman is shot in the chest by the Grim Knight. The Batman Who Laughs tells him not to get up, for this bullet has a taser in it. He tells Batman the Grim Knight is the deadliest man alive. He is them if Joe Chill dropped the gun in the ally and they picked it up. The Grim Knight is not just all about guns. He weaponized Wayne Enterprises. He is a walking war.

Batman asks what he is doing, and the Batman Who Laughs states he is dismantling the Last Laugh. He also initiates the self destruct signal. Wayne Tower will be coming down within seconds. Before he leaves, the Batman Who Laughs says this Bruce is the most miserable out of all the Bruces in the multiverse. They have peace because they affect change. This Bruce is the least accomplished out of all of them. To these other Bruce Waynes, this earth’s is the true joke.

Inside the Batcave, Bruce yells for Alfred to wake up the Joker now. He yells for the Joker to tell him what the Batman Who Laugh’s plan is. Joker says there is only one person who knows.

Elsewhere, Gordon enters a food market and asks his son for his help. He might be one of the only people who can help them.

Analysis: I have read the entire DC slate of comics for this week, and I can definitely say this issue is the best. I like Snyder’s Justice League stuff a lot, but I feel he is more at home writing these types of stories. You can see how much he puts into this story. Although this story is about Batman, you can see Snyder trying to addressing important philosophical concepts. Snyder has said in interviews that Justice League is his examination of how we relate to the universe at large. I believe The Batman Who Laughs is an examination of our shadow selves.

I really enjoy this issue. It has all the things you are looking for in a story: action, mystery, intrigue, and heartfelt moments.

I feel as if Snyder wrote Alfred from the reader’s perspective. Bruce could have saved everyone on earth trouble if he let the Joker die. Superman brings up this same sentiment in Injustice. Bruce imprisons these freaks with the hopes of rehabilitation, but they just immediately escape and hurt people. Alfred also gave him an out. He adopted the Batman Begins approach to the problem: he could just not save him. With Bruce being Bruce, he would not entertain this path.

I like how the Batman Who Laughs said this Bruce was the joke, the true nightmare. He is the most miserable and least accomplished out of all of them. These other Bruces do not suffer the Curse of Sisyphus as he does. And, it does make you sit and think if this is true. What has Batman really accomplished all these years? Joker is still himself. Bane is out and about. Gotham is not safer — just weirder. He has strained relationships with his sons. His relationship with Selina has withered. He is just a rich, lonely, and miserable billionaire staving off the death of the city.

I do find it odd how Bruce states he will kill the Batman Who Laughs if he has to. We all know Bruce has his “no kill rule.” You could say killing is killing even if it is himself. But, that might lead to some very interesting discussions on philosophy. But, I read this issue like this: Yes, Bruce hates the Batman Who Laughs. But, not because the guy does bad stuff and has a weird mask. This person is Bruce’s darkest side. We all have our dark sides — these shadow selves. Every day, I put mine to death to be the man I need to be. Bruce is doing the same thing, just he has a physical manifestation to kill.

I am curious how Gordon’s son, James, will help Batman and Gordon in their hunt for the Batman Who Laughs. I guess it takes a psychopath to catch a psychopath.

I absolutely loved the art. Jock and company really excelled on the panels which had a lot of action. The camera placements, pencils, and colors were just perfect.

Final Thoughts: I am still unsure of the overall plan for the Batman Who Laughs to this point, but I am really enjoying this mystery.