Review: The Batman Who Laughs #3 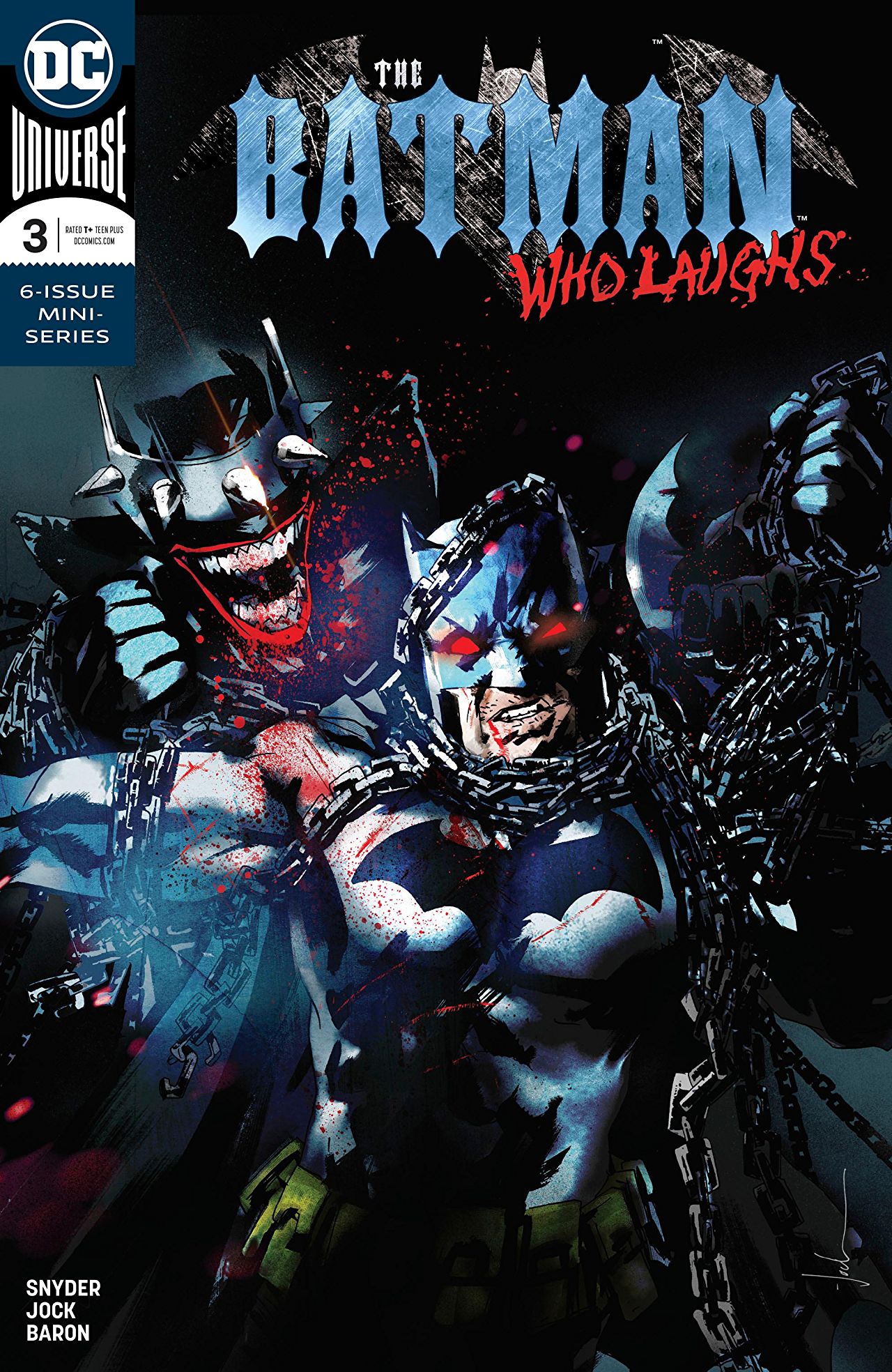 Overview: Bruce seeks the help of a reformed psychopath only to learn he must become one as well.

Synopsis (spoilers ahead): Bruce remembers how his father wanted to be a neurosurgeon. Although he never became one, he still kept a lifelong interest in the field. He was always fascinated by the question of where happiness lives in the brain. He found it funny how the same part of the brain which controlled visual planning was also responsible for contentedness. Planning and envisioning good things played a role in making those goals be successful. When Bruce fell into the well, his father told him to visualize himself climbing out of the hole with the rope. His father told him to imagine being brave. Bruce states how he thinks Batman was born at that moment, even before the alley or the window. He has always been one who plans. But, he has forgotten what it is like to grasp for a plan and it not be there, or grab a plan and finding something else entirely.

In the store, Gordon asks James, his son, if they could talk. James tells him he is always monitored and timed. He follows the program laid out to him at the beginning of his rehabilitation. He has a schedule, a plan he needs to follow. Gordon tells him he knows his program and has asked his supervisors for some time off the grid. He desperately needs James to listen to him. Gordon tells James he knows of the medical scans of his brain. He knows James’ brain is making those connections that the psychopathic brain does not have. He is different now. He feels shame and remorse. He feels guilt.

Gordon tells him he is not there to talk about the program. Batman enters the room and tells him that it is about plans. He wants to know about the plans to kill a city in multitudes of ways. James tells him he is not like that anymore, and Batman interrupts him saying he knows what program James is going through. But for today, he needs the psychopath and not a recovering criminal. He needs the very thing his mission is against. He wants the old James.

Batman shows him a map of Gotham’s water system. He tells James about his countermeasure called “Last Laugh”, and how the Batman Who Laughs plans to infect Gotham. He wants James to tell him which route he would take. He tells James he was a child prodigy when it came to this stuff. The criminals of Gotham considered him the greatest schemer and planner — even Joker considered him the best.

Gordon states James’ journals of his schemes were submitted to evidence years ago. Batman tells him the Batman Who Laughs has retrieved them. He needs to know which route he will take.

Batman, Gordon, and James sprint to the Batmobile, but the Grim Knight stops them in their tracks. On his world, Gotham is his Batcave. Although this world is slightly different, he can adapt and be cozy here as well. He tells Batman the plane above them in the sky is going to have one of its engines blown out. If they do not hand over Gordon, then all of the passengers will die. The Grim Knight takes Gordon and leaves. If Batman tries to follow him, then the passengers in the sky will meet a quick death.

Beneath Gotham, Batman angrily demands James to see which route the Batman Who Laughs will take. James tells him he will try and figure this out, but he needs Batman to calm down. Batman apologizes for his outburst; he was just not ready for this monster to return so soon. Wayne Enterprises has been trying to rid Gotham of Nth Metal. James interrupts and asks him if this nightmare infected him with something. Batman tells him he has enough antitoxin to hold off its effects for at least another week. James tells him that although his mind is not as it once was, he does recognize Batman’s voice. It is flat, with no emotion. James practiced hiding this from others by reading greeting cards to himself — trying to emulate the emotion they convey.

Alfred calls Batman and alerts him Joker woke up, attacked him, and ran away laughing.

Batman leaves and tells James he was right. Everyone was right, except him.

Alfred comes home and tries to locate Bruce. He finds Bruce in the well he fell into as a kid. Alfred sees the antitoxins are smashed. Bruce asks what Alfred needs. Alfred responds that he, no they, are going to plan and figure out how to stop this once and for all. Bruce, with a hammer in hand, tells him maybe their plan against the Batman Who Laughs is wrong, or perhaps they were always wrong. He tells Alfred there in the well, he came up with his big plan to save the city. But, his approach was wrong. Batman is weak and useless. Alfred tells him that Batman will work. With a smile on his face and a spiked metal crown on his head, he tells Alfred that plans change.

This is Snyder at his best. I cannot find anything I did not like in this issue.

I loved the plot with James Gordon Jr. You can see he changed, but his father and Batman wanted him to go back into his old ways. They send every criminal to Arkham because they believe villains can be rehabilitated, but they want James to backslide. This is akin to having a reformed heroin addict to get back on heroin. Why on Earth would you ask someone to do such a thing!

But, I believe this moment and the entire story in general track with what Bruce said in his monologue. When you are faced with a situation you did not plan for, you either drown or choose a darker path. The Batman Who Laughs is pure and utter chaos. Batman is hurriedly looking for a way to stop him and he is sacrificing all he stands for to catch him. Batman beats criminals for the greater good, but to ask those who are trying to live as a decent citizen be a monster again, is to flounder in the face of uncertainty.

The art is fantastic. Just, I love everything Jock is doing. From the scenes with the Grim Knight to the Iceberg Lounge and everything else, I just loved it all.

One of the funniest panels in the book was when the Grim Knight made fun of Batman by saying “Great job, Bruce”, and Batman responds with “Thank you, Bruce.” This is before the grappling hook took the Grim Knight away.

The creepiest scene was the one where the Joker stands in the Batcave and you can see his heart beating inside his chest. It is just creepy.

Final Thoughts: Well, Bruce just became the Batman Who Laughs. I am curious how he will avoid the fate of the Dark Multiverse version.