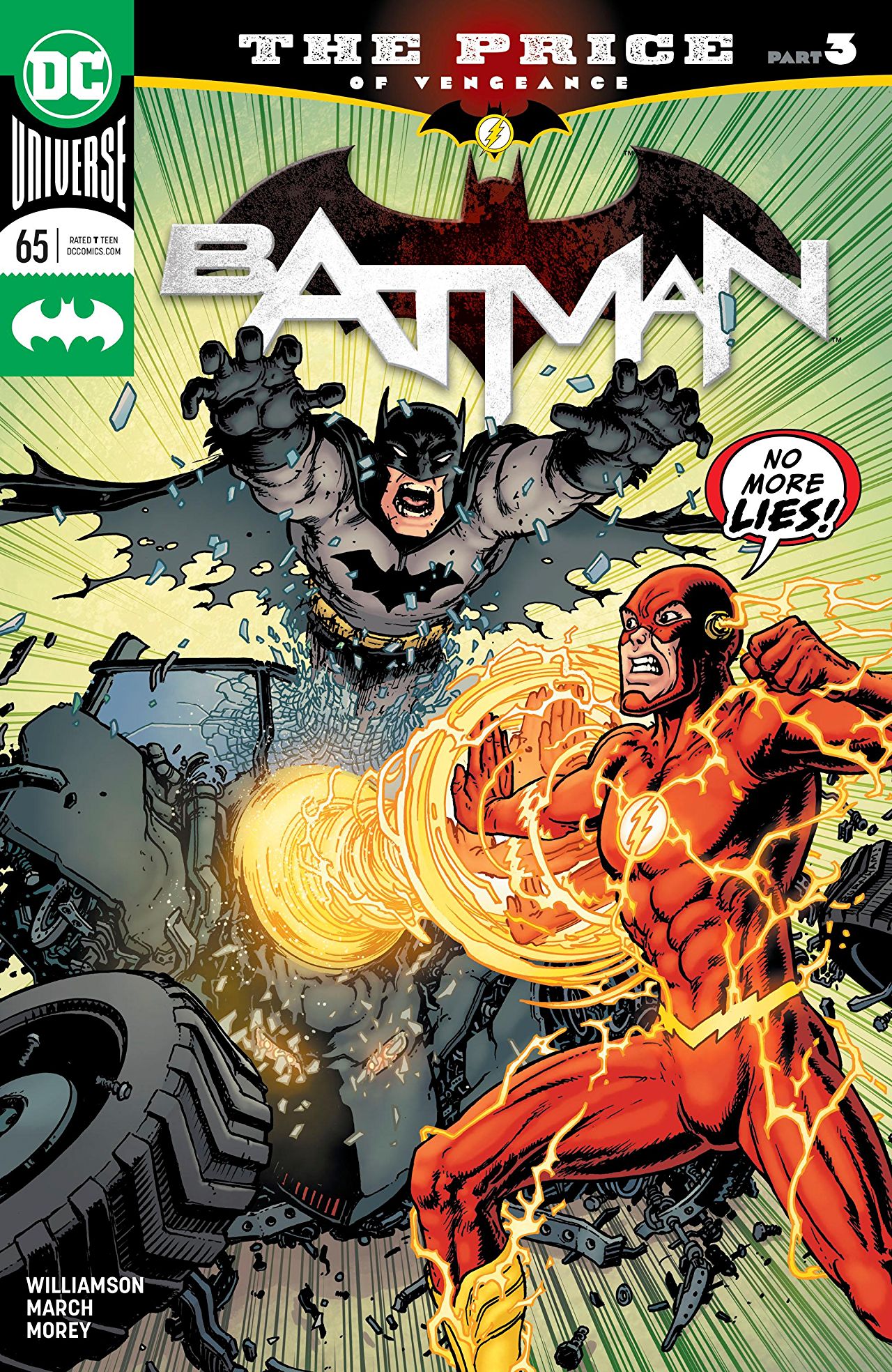 Overview: As Gotham Girl attacks Central City, Flash and Batman push themselves to their limits trying to stop her.

Editor’s Note: This issue is the third part of a four-part crossover between Batman and The Flash. The crossover started in Batman #64 and continued in last week’s The Flash #64.

Synopsis (spoilers ahead): Title card: “…what doesn’t kill you…”

Claire Clover, Gotham Girl, narrates her history. She imagines a scene where she rescued her family from the mugger in Crime Alley, but narrates that she wasn’t even there that night. Batman saved her parents and brother, so she imagines her own origin stories. She feels her body breaking down as she uses her powers, but pushes through the pain.

Batman and Flash fight the copies of Gotham and Gotham Girl, holding nothing back, as the copies were never truly alive. Flash carries Batman at super speed around the room, causing the zombies to follow, using up their powers and dying, just as Gotham himself did.

Still furious at Batman, Flash runs away to save Central City from Gotham Girl, despite Batman’s insistence that they must form a plan.

In Central City, Iris looks for a photo of Wally to prepare to write his obituary. Gotham Girl bursts into the police station, just as Flash arrives to stop her. He tries to bond with her by telling her of his grief for Wally, just like her grief for Hank, but what appears to be a re-animated Hank arrives to fight alongside Claire.

As Batman rides the Batwing to join Flash, Hank throws Flash through buildings. Gotham grabs Flash, saying that his powers extend to super speed. However, Hank begins to melt, to Claire’s horror, as she says that “he promised” Hank’s powers wouldn’t kill him this time. Hank dies again, saying he was happy where he was before.

Batman arrives just as Claire attacks Flash in grief and rage at her brother’s second death. He tries to persuade her not to take more of the serum after what it did to Hank, but she injects herself at the neck and begins to glow with an overwhelming light.

Analysis: After a very disappointing second issue (The Flash #64), Josh Williamson and Guillem March produce a much more coherent and effective setup issue for the conclusion next week. March’s linework, enhanced by Tomeu Morey’s alternately foreboding and gloriously dazzling colors, captures horror in the melting copies, grief in Claire’s agony at losing her brother again, and heroism from both Batman and Flash. There is a real expression and power in March’s acting for all of the characters.

The retcons to Gotham Girl’s attitude and history destroyed much of the coherence of the last issue, but here, a few of the retcons act more as a clarification to previous issues than contradiction. The revelation that Gotham (Hank) died because he exhausted his powers in the fight against the Justice League and his sister, rather than Claire killing him directly, recast “I Am Gotham” in a much more effective light. Williamson also clarifies Batman and the Flash’s emotions – the Flash has a touching moment of realization that for all the destruction she is causing, Claire is an innocent – and Batman’s desperate pleading with Claire to save her from her own power captures the heart of Batman’s attitude towards her, as seen in all of the “I Am” trilogy. The accusation Claire hurls at Batman – that he makes the suffering and sacrifices of his family and allies all about himself – fits nicely with some of the subtle character work we’ve seen recently in “Knightmares”, but ultimately it’s only a grace note of a reference, rather than a meaningful exploration of the character, so that doesn’t work as well as the other two elements analyzed.

All in all, despite some frustration at the dropped threads (Flash still doesn’t know about Catwoman, Batman still hasn’t discovered who gave Claire and Hank their powers), this issue provided a lot of the pleasures of the first issue of “The Price” without most of the drawbacks of the second.

Final Thoughts: Williamson and March weave a much stronger penultimate issue of “The Price”, highlighting the horror and tragedy of Gotham Girl’s plan.