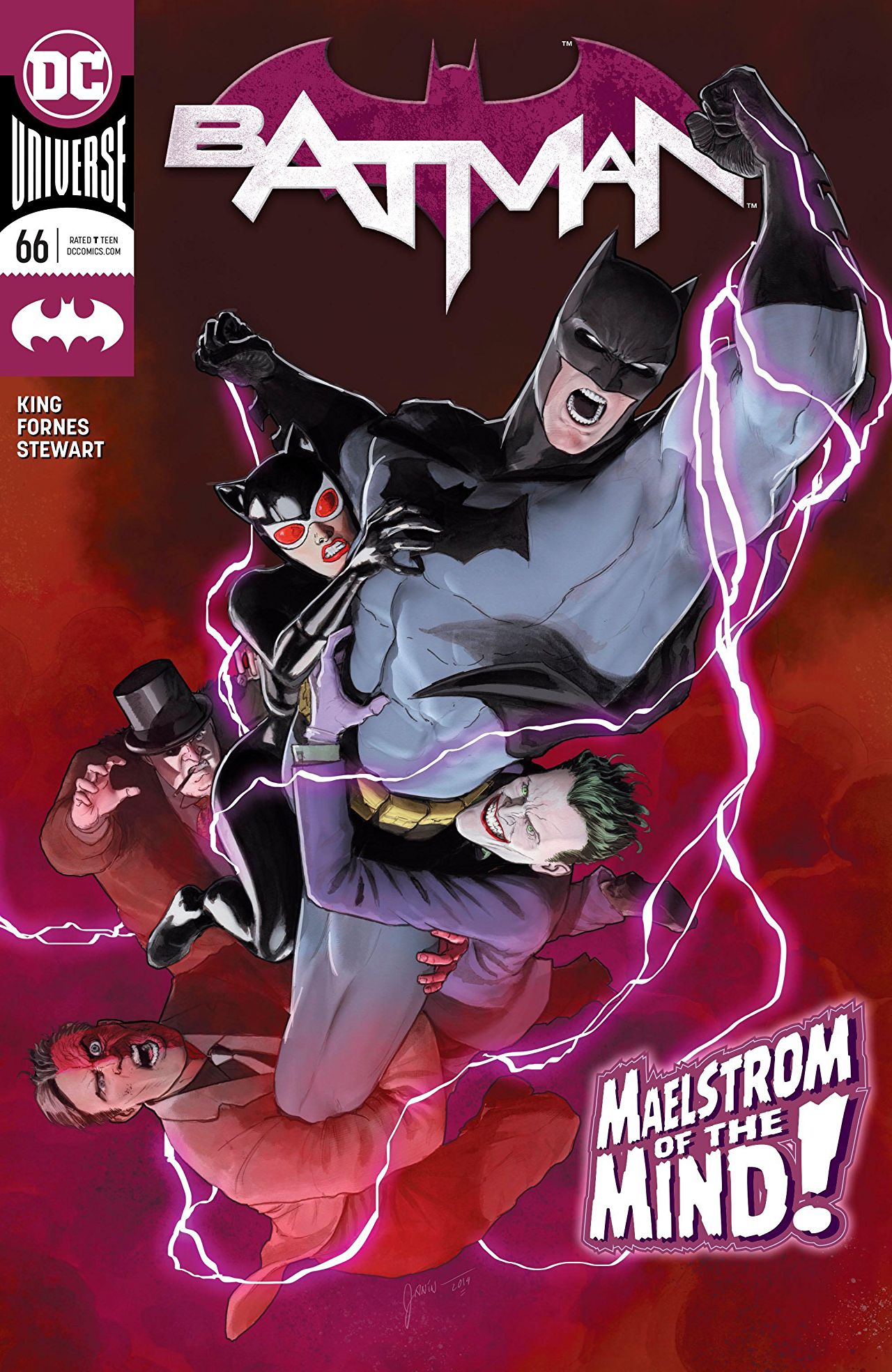 Overview: As Batman continues to struggle to escape his Knightmares, he dreams of Catwoman being interrogated by The Question.

Synopsis (spoilers ahead): We open with Selina Kyle, Catwoman, being interviewed by the Question. She borrows a cigarette and then recounts how she and Batman met, on the street, in Batman Year One. She says she saw the tension between tough and gentle even in that first fight. When the Question brings up Batman’s version of events – that they met on a boat – Selina says she wrote a note to explain why she left in Batman #50.

Selina begins to tell the story of their love – how it snuck up on them, and they found themselves in the middle before realizing they’d begun. She recounts a story of working for Two-Face to steal a diamond to lure Batman so that Harvey could kill him. However, she’d gone to Batman and worked out a plan to double-cross Two-Face. After that, they worked together…and knew there was something more. The tension between thief and hero, their various love affairs, but always returning to each other. Bat and Cat. Selina refers to the note, and the Question asks her to go over it with him.

She tells the Question that Batman isn’t like Superman and Wonder Woman. When they go up against giant squid monsters, his best friends have the powers of gods. But he jumps in after them. Because of his vow.

She says there are many, like herself and the Question, who are good at fighting and saving the day. But none of them are Batman. She believes it’s because Batman has no room in his life for anything but his vow.

The Question tells a story of men trying to figure what wind moving a flag means, then reveals that he and Selina are both just another nightmare, Batman trying to escape by figuring out why Catwoman left him, all those months ago.

Selina left a note. In the note, she claimed she needed to let Batman go because she loved him as a hero too much to let him lose that heroism. But now…his family has fallen apart, he has abandoned his friends like Jim Gordon, and he’s been captured. If she left him to make him strong, why is he so weak now?

Selina takes a long drag on her cigarette, looks across the table and says:

Analysis: After the frustrating (if understandable) month-long break of “The Price,” Tom King returns to the Batman title with part four of his “Knightmares” arc, this one entitled “Cat.” There are a lot of criticisms thrown at this seven-issue arc – it’s just a dream sequence, nothing is happening, there are too many comics playing with questioning reality right now (my personal criticism), dream sequences are too easy to make metaphors and symbols obvious. However, despite my dislike of the first issue of this arc (#61), with each issue, King wins me more and more over to why this sequence is necessary.

Batman is an incredibly stoic and taciturn character. Though Bruce has done some talking in issues #51-60, particularly in the excellent “Cold Days” arc, all of his statements filter through some disguise or other, as he continues playing the multiple roles that make up his life. Here, captured by Thomas Wayne, the Flashpoint Batman, trapped in a machine, dosed with Scarecrow gas, Batman is forced to articulate how he feels about the love of his life leaving him on a rooftop, alone. In issue #62, he questioned his conception of a family through the myth of Pygmalion, questioning if he creates the people he loves. In issue #63, he questioned whether love and the happiness that love brings is worthwhile, since everyone dies in the end, some sooner than later. In this issue, he questions whether Catwoman told him the truth in her note explaining why she left – is it possible for Batman to be happy and still be Batman? The entire issue shows Selina repeating, over and over again, “I wrote a note,” reminding us of the incredible, heart destroying letters Bruce and Selina wrote to each other in issue #50 – but the issue ends with three simple, devastating words: “Okay. I lied.”

And with that, everything we thought we knew about Batman and Catwoman’s relationship at this point changes. How exactly? We don’t know, but the next thirty-nine issues will have to explain. Those of us who believe that there has to be hope for Batman – that he can be Batman and find a measure of happiness, that there is more of Bruce Wayne left than an empty shell filled only by a candlelit oath.

Quite apart from the amazing emotional journey King takes us on, there are so many pieces of craft here – the very characteristic King jokes – “You do everything he wants?” “In his dreams” – the dream Question acting as Batman’s avatar – “Are you the answer?” “I’m the Question” – the sheer amount of dry and mischievous humor pokes through even this incredibly heartfelt examination of Batman’s broken heart. The deliberate parallels and reversals – in many ways, this issue calls back to the masterful Batman Annual #2 – images of Catwoman descending to meet Batman, and above all, the twisting of the image of Batman and Catwoman in the rain on a rooftop, but instead of facing each other, Catwoman walks away. Having lost a bit of the occasionally stilted element of his repetitive, poetic dialogue style, making the comic feel more natural, while still retaining the extreme stylization that gives each sparse word that much more weight, the dialogue captures the pain, the joy, and the longing of Catwoman and Batman’s relationship.

A few months ago, Tom King on a podcast mentioned that Jorge Fornes would be joining him for one issue of the Knightmares arc, calling him “the best Batman artist.” Though I adored Fornes’ work on Batman #60, the final issue of “The Tyrant Wing,” I thought to call him “the best Batman artist” was a bit of a stretch in a world that contains Lee Weeks (who is scheduled to work with Fornes in the next issue). After seeing this work, though I may still have a slight preference for Weeks, Fornes deserves that all the praise King heaps on him and more. Keeping the deeply lined face of David Mazzucchelli’s Year One Bruce (which is directly quoted in Catwoman’s “It was on the street” memory), while using a thicker line and a style all his own, Fornes creates a Gotham, a Batman, a Catwoman, and a Question that spring to absolutely vivid life. The composition uses beautiful lines, angles, and appealing shapes in ways very reminiscent of a slightly more detailed Darwyn Cooke, and Dave Stewart (colorist on J. H. Williams’ amazing Batwoman comics) drenches the whole book with subtle shades of cream, grey, purple, and a whole lot of black. Even apart from Tom King’s scripting craftsmanship, Fornes and the rest of the art team make the book well worth the purchase and reading.

Final Thoughts: After a month off, Tom King returns with Jorge Fornes for the strongest issue of “Knightmares” yet, continuing a powerful examination of Batman’s reaction to the events of Batman #50.