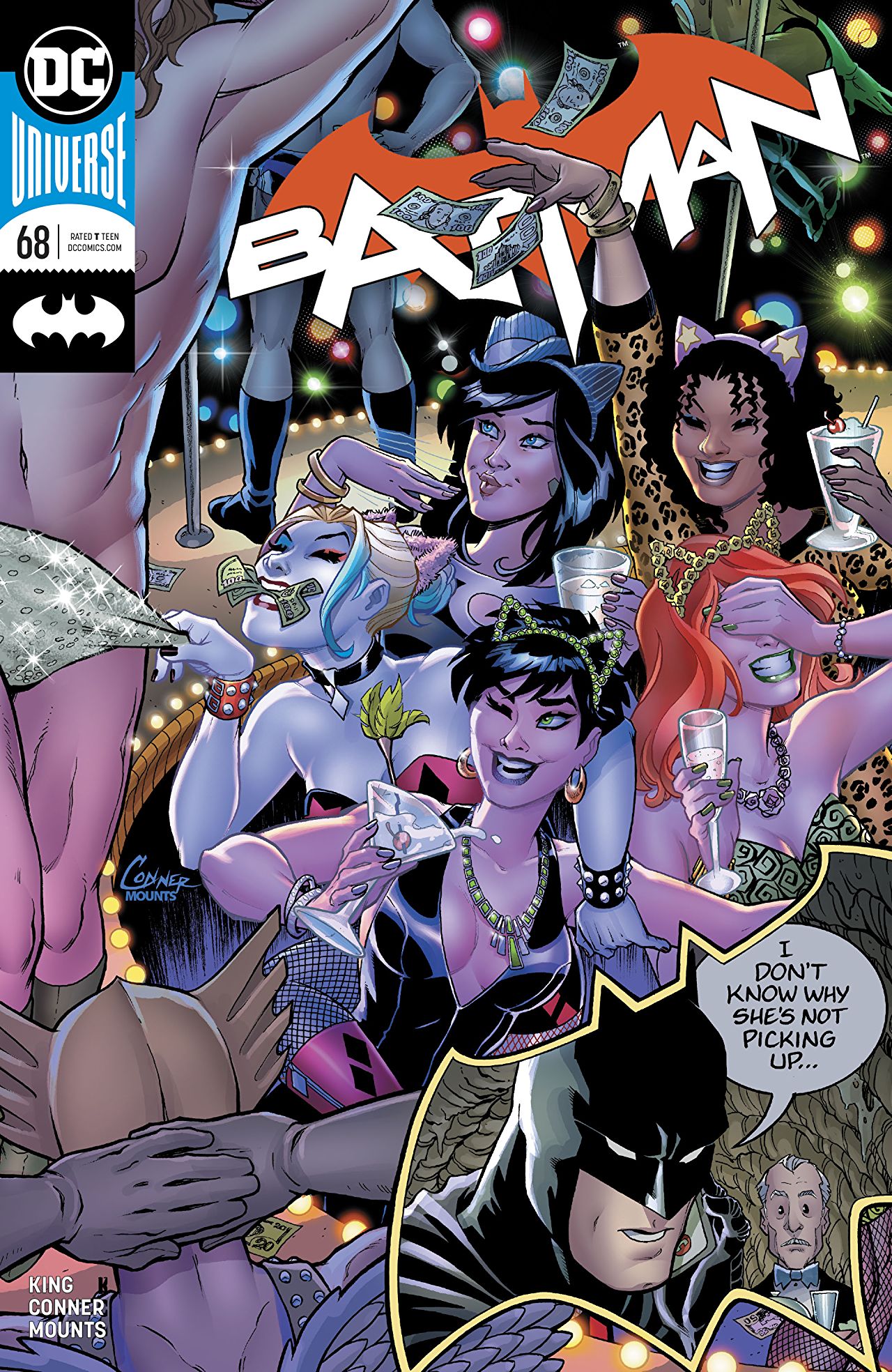 Overview: Catwoman and Lois Lane party the night away in Batman’s sixth Knightmare.

Synopsis (spoilers ahead): At the Fortress of Solitude, Supergirl tosses the impossibly heavy key to its door in the air casually, asking Catwoman and Lois Lane if they’re ready. Though Lois and Selina hesitate at first, when they realize how drunk they are, they charge ahead. Supergirl unlocks the door, but has to patrol for asteroids, as Clark is spending the evening keeping Bruce company.

At Wayne Manor, Bruce and Clark eat soup as Alfred serves them. They awkwardly make small talk, mentioning that Kara and Dick are taking care of their normal responsibilities.

Superman’s three Superman robot servants greet Lois and Selina, and they decide to raid Superman’s extensive liquor collection (all gifted to him) and end up lying on the floor after at least twelve glasses of exotic (many extragalactic!) wines.

Bruce shows Clark his family paintings, as the awkwardness continues.

Lois pushes Selina into one of Brainiac’s traps that Superman defeated, a hot tub so blissful you never want to leave – then hops in herself. Floating together, Selina confesses she doesn’t have many friends, and Lois says that she is Selina’s friend.

Bruce and Clark watch the Gotham Knights game, and Clark finally brings up what they are both thinking about – what their beloved partners are doing.

Lois convinces Selina to try on some of Superman’s outfit collection (likely for Supergirl or other Super-ladies). She then convinces the Superman robot servants to perform a striptease for the two of them.

While playing chess, Clark tries to offer marital advice to Bruce, but Bruce focuses on winning.

After Selina and Lois get a massage, they signal Clark to pick them up, using Jimmy’s signal watch Lois stole, as Selina has rubbed off a little on her.

Clark tells Bruce that not being needed, relaxing, is his worst nightmare. Bruce denies it, unconvincingly. Clark accuses Bruce of loving being needed, loving the brokenness of the world that he has to fix. Before Bruce can respond, Clark hears the signal, and they zip up to the Fortress. As Clark takes a smiling Lois home, Selina tells Bruce she made a friend. Selina asks Bruce if they are friends, and Bruce is flummoxed, saying that he loves her. Cat ends the issue by saying she loves Bat, too, over the truly nightmarish image of Batman strapped to a horrifying machine causing his endless bad dreams.

Analysis: After the nearly wordless issue #67, Tom King returns to his more typical poetic, recursive dialogue style in this penultimate issue of the Knightmare’s arc. He uses his usual arsenal of writing techniques, like repetition to mimic the more realistic type of dialogue which eschews polish and tries to present our speech in its more broken form, in an extremely controlled way, highlighting the repetition and cyclical nature of “normal” life that causes Bruce so much anxiety when he thinks about a happier life with Selina. He also uses the name of the primary location of the issue, the Fortress of Solitude, as the name of the issue, “Solitude,” highlighting Batman’s simultaneous greatest desire and greatest fear – to be left alone – free of worry, but also without love. Little notes of continuity and character sprinkle the issue, from Selina wanting Batburger (Batman #16), to the Superfriends connection between Lois and Selina (Batman #37), and Batman not trusting Superman to carry Catwoman, since she’s more precious than galaxies. King even presents a lovely bit of wordplay in the chess game where Clark talks about marriage, and Batman ends with the word, “mate.” One question arises from this dream – did Selena and Lois have a time bonding together in the Fortress of Solitude, between Batman #37 and #50? The Prelude to the Wedding miniseries by Tim Seeley seemed to indicate that Catwoman had a bachelorette party with characters from previous runs of Catwoman, like Mouse and Eiko Hasigawa. The clash isn’t fatal to continuity, but highlights once more that King’s story tends to function best when not forced into a connection with other writers – frustrating in a shared universe creation, but a testament to the singular focus with which King is telling his story.

Superstar artist Amanda Conner provides most of the art for the issue. Though utterly delightful, with thick, cartoony, appealing lines and a very sexy style, especially (but not only!) when drawing Lois and Selina, Conner’s characters seem a bit mismatched with King’s recursive, poetic dialogue. It feels like more polished, screwball or Disney style dialogue should be coming out of their lovingly drawn lips. Despite this slight tension between words and images, King and Conner work very well together on the narrative portion of the work. Conner’s use of the nine-panel grids is masterful, a much stronger use than some of King’s artists give him, using symmetry and asymmetry, character positioning in the frame and “camera” angle too, and so many more techniques tell the story, reveal relationships, and strengthen the poetry of the writing. The twelve-panel grid of wines is particularly inventive and fun – the whole sequence in the Fortress of Solitude is clearly King and Conner paying loving tribute to the history of Superman.

Conner and King also work together to communicate the deeper message of this Knightmare – Bruce’s mind struggling with his deepest fears. Lois’s meditation on life – a cycle of hard work, duty, leading to more duty, definitely plays a part of Bruce and Selina’s challenge with “happiness” – character growth, more emotional health will leads to more ability to be responsible, less freedom, less ability to be two broken people who uniquely understand each other.

This issue was delayed by a week, and given that the last four pages are all finished by different artists, it seems likely that art scheduling issues played a part in that delay. However, King has also revealed that he’s restructured the next arc (The Fall and the Fallen), possibly indicating that last minute changes to this story were necessary, mandating the change in artists as well. Dan Panosian, well known for his work with the Teen Titans Go franchise, provides a page fitting well with Conner’s style. Frequent Conner collaborator John Timms (Harley Quinn) provides the two pages where Superman, Batman, Lois, and Catwoman reunite, and where King spells out his thesis on Batman’s fears most clearly. His darker, less rounded style fits with the idea of the happiness and tranquility of the dream breaking up, and the issue ends with one page drawn by Batman series regular Mikel Janin, strapped to the machine responsible for all of these dreams.

Conner’s cover, of Selina celebrating a more generic type of bachelorette party than depicted in the interior of the book, perfectly captures the mood of the book, while also presenting a witty joke as Batman tries to call his bride-to-be, saying “I don’t know why she’s not picking up.” Normally, text and especially word balloons on a cover indicate the editor trying too hard to promise humor or action inside the comic, but here the dialogue presents a fun miniature one-page narrative of its own. Francesco Mattina’s variant has nothing whatsoever to do with the comic’s story or tone – a generic, highly rendered image of Batman with a savage expression. Though beautifully painted and intensely detailed, the mismatch is even stronger than that between King’s dialogue and Conner’s linework.

Final Thoughts: In the penultimate issue of the Knightmare’s arc, Tom King and Amanda Conner team up to produce tensions pointing at the problems inherent in Batman.