Review: The Batman Who Laughs #4 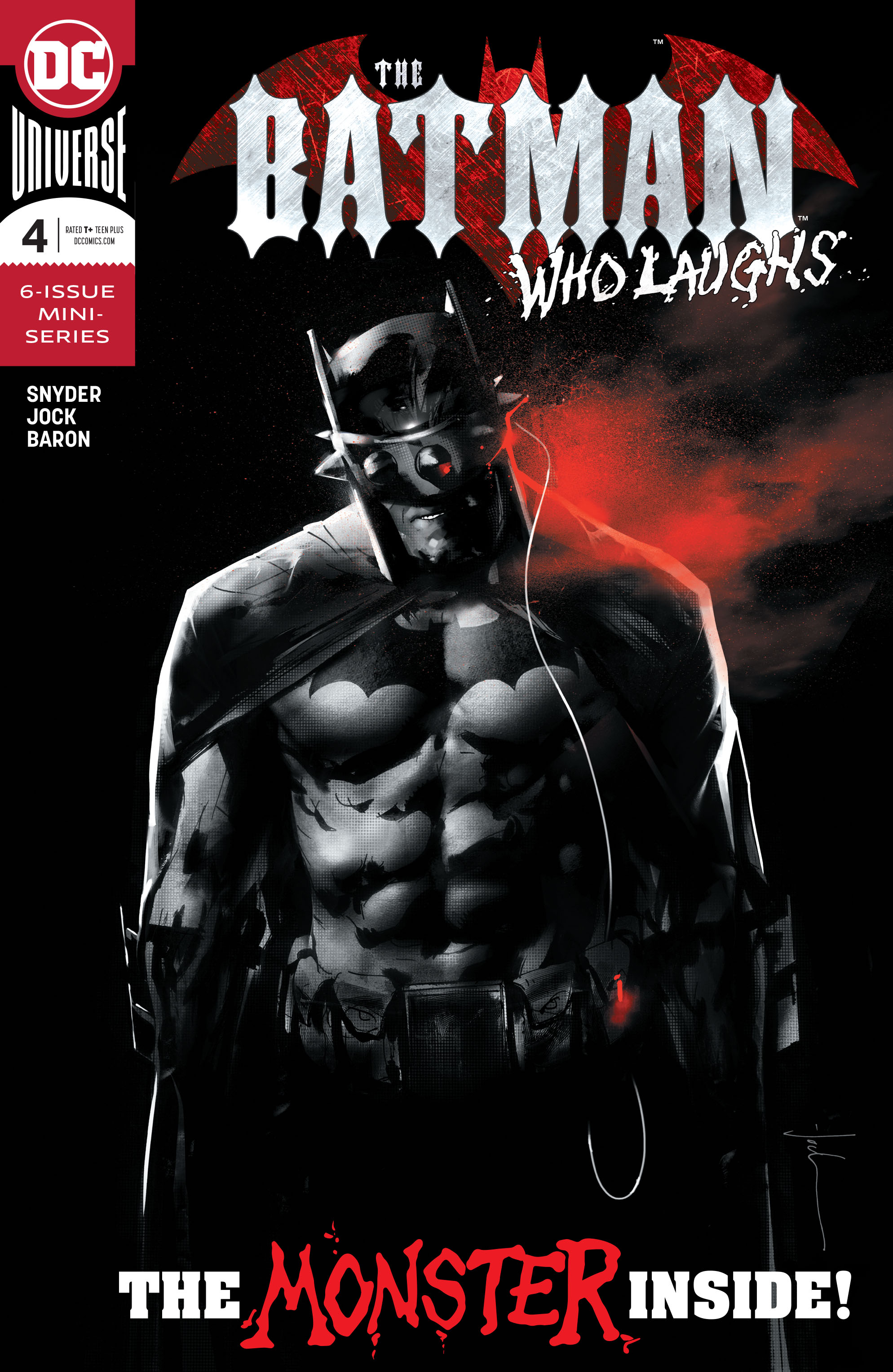 Overview: Bruce begins to see the world as The Batman Who Laughs does.

Synopsis (spoilers ahead): There is a phrase by the Miagani Tribe, who lived in Gotham before the city was constructed, which says “Happiness is seeing the world through the eyes of children.” Bruce admits he tries to remember this when the times are tough. He tries to view the world through his children’s eyes.

In the Batcave, Alfred demands to know what Bruce had done. Bruce tells him he did what he had to do, he allowed the Joker toxin to infect him fully completing his transformation to the Batman Who Laughs. Alfred takes off the mask, and he sees Bruce’s blood red eyes. Bruce demands that Alfred return the visor. The Batman Who Laughs’ eyes see through the membrane of the Dark Multiverse. His visor is made of dark metal, and it allows him to filter out the dark energy to focus on what he wants to see.

Alfred refuses to give it back and he hits Bruce in the face with it. Bruce goes to counter, but Alfred quickly disarms him. During this entire time, Bruce is trying to not lose control. Bruce pins Alfred against the Batmobile and tells him he has just held him back for years. Bruce comes to his senses and lets Alfred go. Alfred is just worried about Bruce. He tells Alfred Batman is not about Bruce Wayne; Batman is about Gotham. And, it is about time he sees Gotham as that monster does.

The Batman Who Laughs introduces himself to a captive Gordon and shares he was his best friend when he was Batman. He was the one who taught the citizens of Gotham to look for the bat-signal in the night’s sky. He tells Gordon he will not be down here long. He has four out of the six canisters needed to infect all of Gotham with the Last Laugh protocol.

Elsewhere in Gotham, Batman is driving through Gotham looking for clues. He uses the visor to see what the Batman Who Laughs does. He can see the energy patterns. He sees the people for who they are. He sees their dreams and nightmares.

Alfred radios in and shares that Bruce was right: The Grim Knight seems to be using the city’s electrical grid to direct more energy to certain repositories of dark metal. Even though Bruce took out most of it, there was still enough dark metal in some places to create portals. The Batman Who Laughs and the Grim Knight are using these portals to abduct other Bruce Waynes.

Batman asks Alfred to connect him with James Gordon, Jr. Batman asks James if he had found which waterway the Batman Who Laughs is planning to use. James reports he has narrowed it down to three. James asks how Batman is doing, and Batman tells him he is fine. James tells him his father always respected Batman’s no-killing code. One death, even the Joker’s, would be a slippery slope. But for James, he always thought that was nonsense. Before his treatments, he saw people as selfish, small, and cruel. So, what happened to them by his hand or by the hand of Gotham was justice. Now, he does not view the world that way anymore.

Batman asks what the point of all this was, and James says he was already a killer long before the first time he killed. The slippery slope is not the action, but our beliefs. James asks if he has a fail-safe just in case something horrible might happen.

Three hours earlier, Batman was testing the water in the Last Laugh Resource Compound. The Joker shows up and says he just wants to talk. Batman tells him he has nothing to say to him. Joker tells him that he and Batman both know they will always be at war. Joker believes one day he will win and watch Batman scream as his city dies, but that is not what he wants today. He wants none of them to win. Batman asks if he should succumb to the toxin and turn into the Batman Who Laughs if he would stop him. Joker responds that he will just blow off his head.

Currently, at Blackgate Prison, Batman is looking for a portal into the Dark Multiverse. The dark energy levels in this prison are off the charts. While investigating the area, the room he is in changes. He must have traveled into another world. Batman comes upon Bruce Wayne, the warden of this alternate Earth, and a contingent of his security officers. Batman tells Bruce he is in trouble, and they both end back up on Batman’s Earth.

Both Batman and Bruce Wayne are stopped by security officers. Batman is separated from Bruce Wayne and is confronted by The Batman Who Laughs disguised as a normal security officer. The officer kills Bruce Wayne and taunts Batman. He tells him Batman is now seeing the world through his truest child’s eyes, one who saw so much tragedy and cruelty. This child no longer has hope or believes in the future. And with that, the officer tells everyone this Batman is the true Batman Who Laughs and they must take him out now.

Elsewhere, the Grim Knight frees Gordon. Since Gordon hunted him on his Earth, he felt it necessary to return the favor. It is now his turn, and he will enjoy it. As Gordon flees, he sends the Batman Who Laughs’ Robins after him.

Analysis: Wow, there is a lot of stuff happening in this issue. In fact, there were multiple times I checked how many pages I had to go because I thought I almost finished the issue, only to learn I had several pages to go.

We finally get a reason for the Batman Who Laughs to wear his visor. I am not sure how a Joker toxin would let him peer into the energies of the Dark Multiverse, but it makes sense why he would want a filter.

We still do not get a glimpse of The Batman Who Laughs’ main plan, but we are seeing the pieces come together. He is using Batman’s Last Laugh Protocol and plans to unleash his toxin via the waterways underneath Gotham. He is grabbing other Waynes from other universes. He framed Batman to buy himself more time and to have the police force turn on Batman.

The art was amazing. I think this is the best Jock has done this entire miniseries.

Final Thoughts: We are nearing the endgame now, and knowing Snyder, all hell is about to break loose.