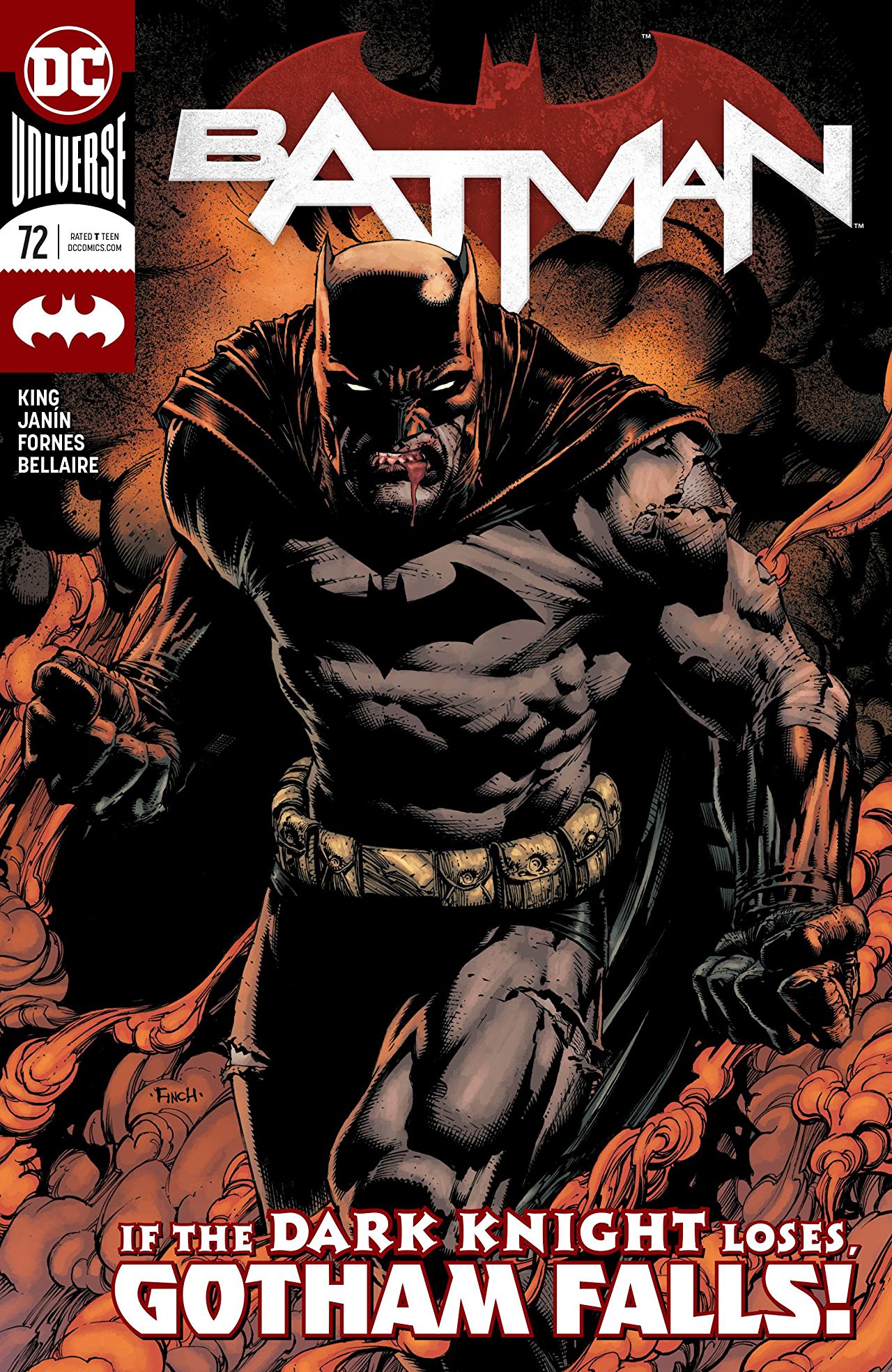 Overview: Bane’s masterplan comes into focus as Batman and Bane face off at Wayne Manor.

Synopsis (spoilers ahead): As lightning streaks across the sky above Wayne Manor, Batman and Bane face off inside the mansion, with Batman leaping into action as a voiceover begins to break down Bane’s master plan. The story flashes to an image of Bane sitting nude on his thrown from “I am Suicide” while the voiceover recounts how Bane engineered the plane crash from Batman #1 which made Batman question his mortality. He then engineered a scenario where Batman would need to work with Catwoman which would provide him with fulfillment and love.

The voiceover continues as Batman rains down blows on Bane, with the voiceover speaking about how Bane allowed himself to be caught and locked into Arkham during “I Am Bane”. Batman delivers a massive headbutt to Bane, who crashes to the floor. The next panel shows Bane opening his eyes as he smiles.

The next page shows Bruce and Selina in Bruce’s bedroom in a scene from “The War of Jokes and Riddles” as the voiceover speaks to Batman’s fear that he is no different from the monsters he faces and how that fear led him to propose to Selina.

Bane rises from the ground and picks up Batman, flinging him into a wall and hitting a portrait of Bruce and his parents. In a series of panels, Batman gets to his feet and puts up his fists, as the voiceover talks about how Batman refuses to get up.

The next page shows a scene from “Everyone Loves Ivy” with Batman and Catwoman kissing over a huddled Poison Ivy and Harley Quinn as the voiceover speaks about how Batman’s love for Catwoman was the first instance of Bruce doing something to make himself happy.

Bane and Batman trade blows as the voiceover continues to recount Bane’s plan. How he had The Riddler reprogram Skeets to have Booster Gold mess with time to show Batman how terrible the world would be without Batman, counting on Batman to share this with Catwoman. As the fight continues, the voiceover explains how Bane unleashed the Joker to tell Catwoman that Batman can’t be happy and be Batman and if she marries him, she’s effectively killing Batman.

The next page recreated a scene from Batman #50, with Bruce and Selena falling from opposite towers away from each other in their wedding clothes.

Bane gets the upper hand in the fight, raising up Batman and bringing him down over his knee. The voiceover continues that Bane isn’t done and the voice states that he knows what Bane plans to do.   As Bane stands over the bleeding, broken body of Batman in his own study, the voiceover is revealed to be Thomas Wayne’s Batman, who asks Bane how he may be of assistance.

Analysis: This is the issue where the long game that Bane has been planning is essentially laid out in its entirety, linking every issue since Batman #1 as part of Bane’s scheme to take down Batman. In a story as long and complex as this series, it’s a necessary piece of housekeeping to catch the reader up as this story moves into its endgame over the next thirteen issues or so.   That being said, based on the way that the story has unfolded so far, the story isn’t really imparting any new information. There is no shock or new reveal in anything that is presented here. I think what really robs this issue of its impact is the reveal that back in issue #50 that Skeets, Gotham Girl, Holly Robinson, and Thomas Wayne, among others, were all working for Bane and that he had engineered the “Breaking” of Batman. It makes me wish that King had held off on letting us all in on that reveal. Think of how much more effective it would have been to make it to the end of this issue, and only then find out that Thomas Wayne is involved in this conspiracy.   It seems like a missed opportunity and having so much information about Bane’s plan going into this issue makes this issue feel a little perfunctory.

That being said, the issue is well structured and I like how the story hands out the exposition over what is essentially an issue-long fight scene. I do question the need to recreate panels and pages from previous issues, and I would have preferred the story keep a tight focus on the fight between Batman and Bane.

I also find it interesting in looking at the voice that King chooses to give Thomas Wayne in the story how mean spirited he seems. Thomas Wayne seems to delight in the pain that Bane is causing his son and it makes me more curious as to what exactly his motivations are in this story.

The art chores are again split between Mikel Janin and Jorge Fornes, with Janin handling the flashbacks while Fornes taking point on the fight between Batman and Bane. Now, I love the Year One flavor that Fornes has brought to this title, and I think that if you’re trying to build mood or an element of noir into the story, Fornes is your guy. In an issue featuring a prolonged action sequence, I can’t help but wonder if the story would have been better served with someone with a more dynamic style like Janin.   The image of Bane bringing Batman down over his knee is iconic and I feel like the issue doesn’t make that moment as big as it deserves to be.

Final Thoughts: I don’t think there was any way around doing some version of an issue where Bane’s plan is spelled out in crayon. While I think there were better ways to execute it, I’m looking forward to the story moving forward from here, in particular, to finally dive into what exactly Thomas Wayne’s involvement is in the story.