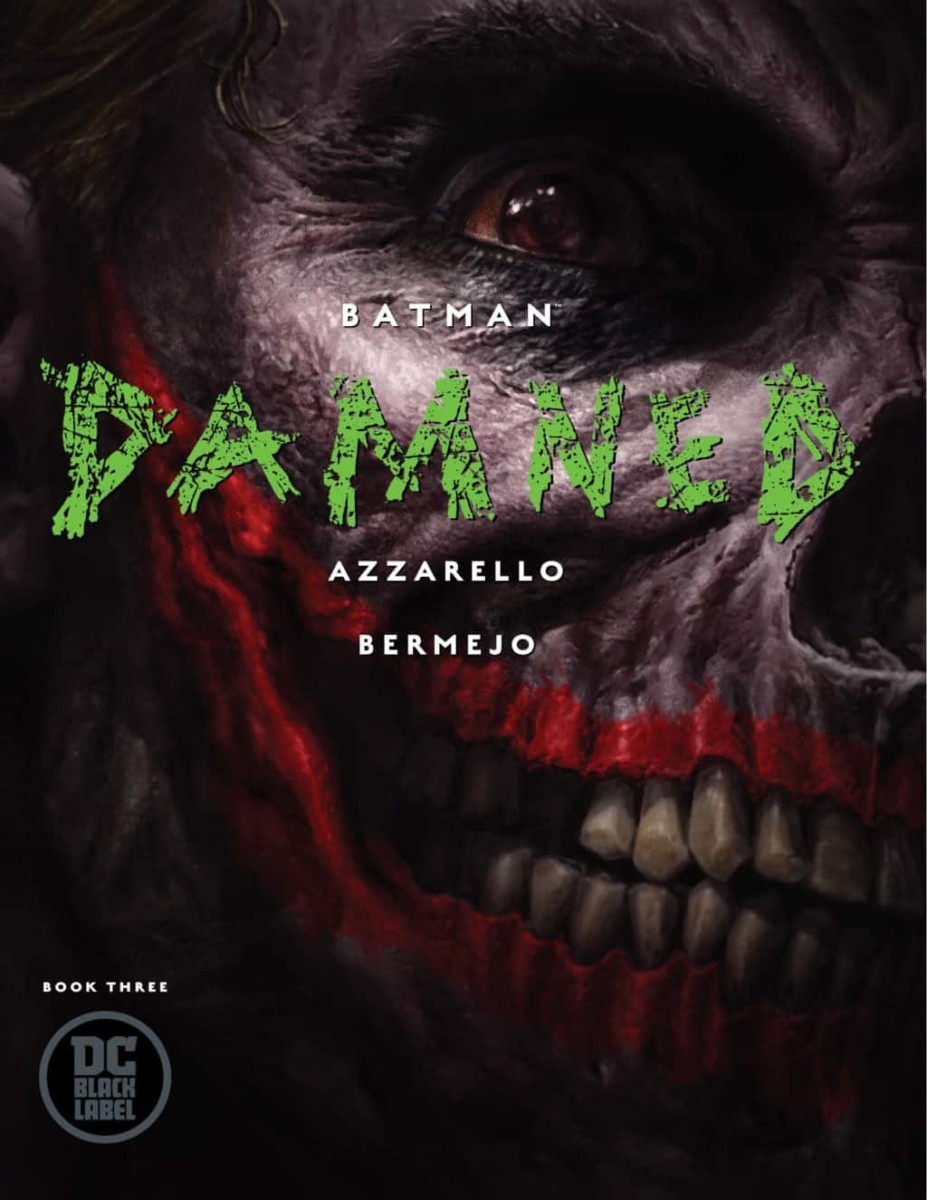 Overview: In the third and final chapter, the mystery of what happened on the bridge between Batman and Joker is revealed.

Synopsis (spoilers ahead): Batman wakes up buried alive inside a coffin in a graveyard as vines bring him to the surface of the graveyard where he comes face to face with Swamp Thing and Constantine. Swamp Thing warns Batman that it is not his life that is at stake and not to trust Constantine. As they talk, Enchantress arrives and takes control of two stone statues that come alive and attack them.   Enchantress speaks of promises and secrets made cryptically before disappearing.

The story then flashes back to young Bruce leaving the movie theatre watching Zorro as his parents bicker. Bruce spots the Enchantress from an alleyway and gives chase. Back in the present, Constantine brings Batman to a nightclub where Zatanna is performing. Deadman appears and takes the body of an audience member with a rat on his shoulder, which Zatanna sends the spirit of Deadman into. Zatanna summons a spirit and a ghostly image of young Bruce Wayne appears as Batman looks onwards. The spirit enters Batman and then Batman, Constantine and Deadman (in still in rat form) appear in crime alley with a smoking gun at their feet. They look before them to see Bruce laying on the ground with his parents shot before them as Bruce is cradled by the Enchantress who says to Constantine that Bruce is hers and that they made a deal, saying “tearless for fearless”. Batman stands over his parents and apologizes to them as Deadman bites the Enchantress on the foot and Constantine shoots her, who then disappears, leaving Batman staring at the body of his younger self along with his parents.

Batman then leaves with Constantine who he says goodbye to as he enters the Gotham City Morgue. Batman is greeted by the Spectre who tells Batman he stands before him in judgment, stating that he knows what Batman did. The story then flashes to the Gotham City bridge where the Joker had fatally stabbed Batman as he was knocked off the bridge. As Batman hangs over the bridge he extends his hand to help Joker but then takes his hand away, fearing what the Joker would do after Batman was gone, as the Joker falls from the bridge. The Spectre then opens up the morgue locker labeled “name unknown” and pulls out a body covered by a sheet.   As Batman lifts the sheet and remarks that he “wishes he was still alive”, Batman dematerializes into the morgue locker which closes shut. The story then ends with a body falling from the bridge, as the Joker surfaces onto the shoreline, laughing with the final page a heart monitor flatline disappearing into a series of “HA HA HA”s as the narration states that this story is just the start of another.

Analysis: This book is essentially “Jacob’s Ladder” if the main character were wearing a Batsuit. I think that this story is Batman in the moments after he has died in at the hands of the Joker as he moves towards the consequences of not only the choice he made not to save the Joker, but his mission as Batman as a whole.   After reading this issue, it definitely brings the first two issues into focus, with Batman waking in the back of an ambulance confused, looking for injuries that have disappeared and trying to piece together events he can’t quite remember as he is haunted by the supernatural.   There is an uneasy feeling that has permeated this series that I think pays off nicely with the reveals between Batman and the Spector at the end of this story, with Batman caught in his own private hell as various forces vie for his soul.

There’s a lot to unpack in this particular issue and this story in whole and I think that writer Brian Azzarello has left some details very much open to interpretation. One area is the flashbacks to Bruce’s childhood leading up to the death of his parents and whether or not they are actual memories or some sort of game that the Enchantress is making to take control of Batman’s soul.   I think that either interpretation is interesting but doesn’t really make a difference to the overall story. The Enchantress sequences are visually interesting and appropriately creepy, and there is something very interesting about the idea that Batman may have made a literal deal with the devil on the night that his parents are killed. As compelling an idea as that is, it feels like a more of a detour for a story that is avoiding the main plot, going so far as to have Batman say that he is avoiding the morgue to see the Joker’s body at the end of the story after facing the Enchantress. It is interesting, but I would have preferred the story to continue with the imagery of the Joker possibly still being alive throughout the story then go down this particular rabbit hole.

The other riddle that Azzarello leaves at the end of the story is Batman being sucked into the morgue locker with the next page having the Joker rise from the water.   Has Batman been punished by the Spectre for not saving the Joker in his final minutes only to have the Joker resurrected at the end of the story? It’s not entirely clear. I think that its pretty clear that the Joker has actually died in this story as I feel that if the Joker had survived then I don’t think the Spectre’s involvement in this story would really make sense. I think its interesting that the book chose to use the imagery of the Joker’s first few moments after being deformed by chemicals in the Killing Joke which gives the feeling that this is an origin of sorts for the Joker at the end of the story. Its also noteworthy that the last image of this story is the flatline from the beginning of this story turning into the Joker’s laughter which is interesting as that was from the equipment monitoring Batman’s heart, not the Joker.

Lee Bermejo’s art is, as you would expect a standout. This is a story that is all about the supernatural and I think that Bermejo‘s work here does a great job to keep an uneasy tone throughout the story. The Enchantress’ final form, with her decaying face, was a standout for me.

Final Thoughts: I enjoyed this story, but it was left too ambiguous and I feel that there is a larger story at play that I wish that Azzarello had decided to explore as opposed to what was presented here. That being said, this is an effective ghost story featuring Batman and his world and I look forward to reading all three volumes of this story.