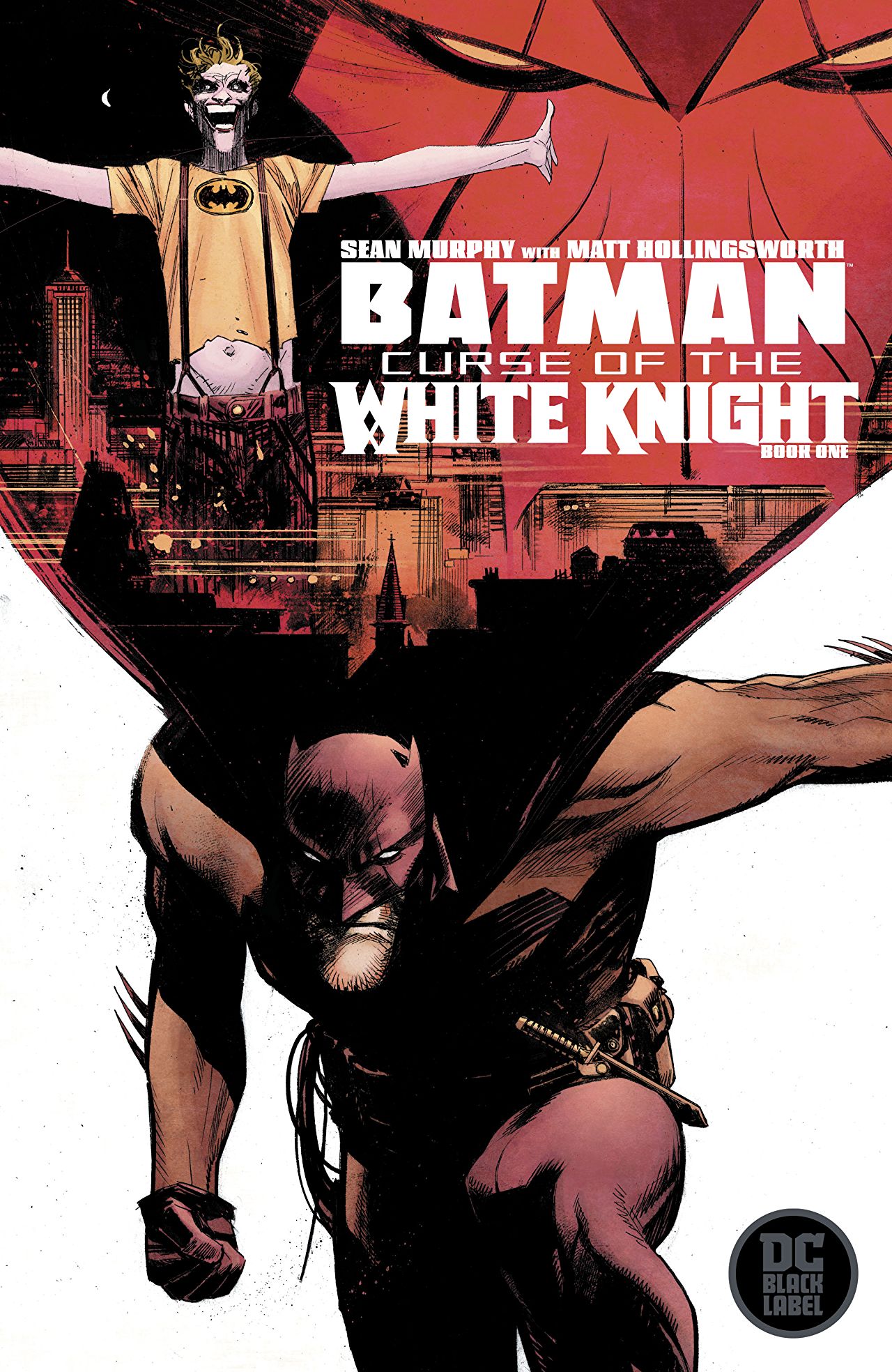 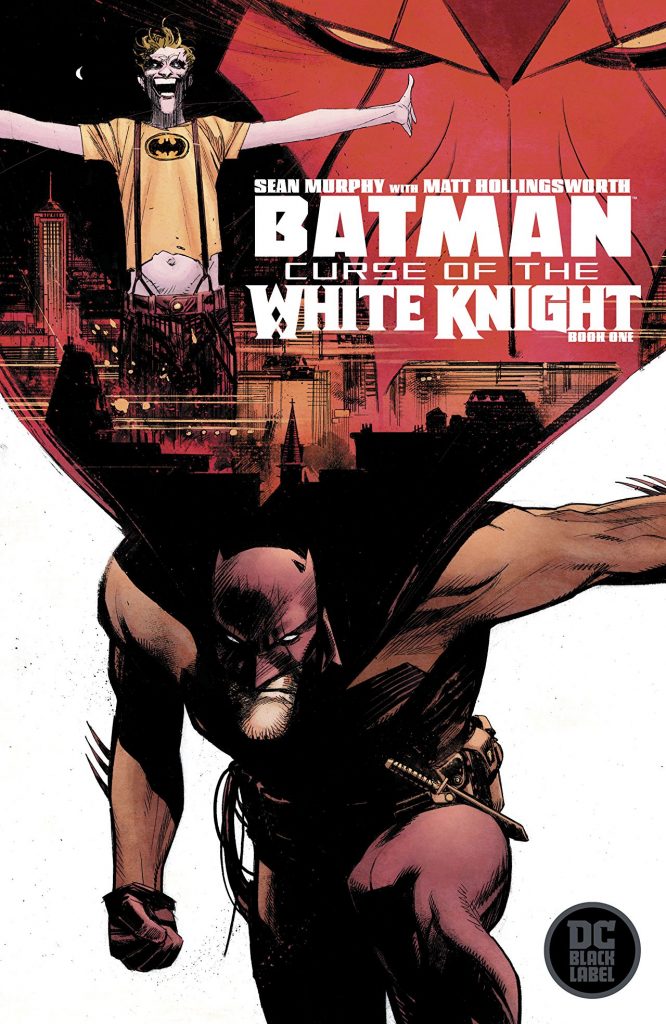 Synopsis (spoilers ahead): Arkham Manor, 1685. Lord Wayne and British General Lafayette Arkham battle viciously over who controls Gotham Valley. Arkham claims that even if Wayne wins, the valley is cursed. Victorious, Wayne stabs Arkham through the chest and throws him, laughing madly, down a well.

Today, in Arkham Asylum, the warden helps the Joker escape to find something hidden in the basement.

Meanwhile, Bruce reads Alfred’s last letter to him, counselling him to embrace Dick and Barbara, his family, as the true solution to his pain and his crusade. Alfred also leaves him directions to find the diary of Lord Edmund Wayne, saying he’s ready to see it now.

Commissioner Gordon and Batman investigate the Joker’s escape, wondering if the theory that elites use villains to further their attempts to buy land in Gotham cheaply is true. Batman deduces that the warden is lying, and intimidates him into revealing that Joker took something from his old cell. Gordon and Batman find a secret passage to an old well, and a body.

Joker greets a powerful woman named Ruth in her office, atop a Gotham skyscraper, saying he has something for her.

In the Batcave, Dick, still a member of the GCPD’s special task force the GTO, is furious at Batman’s plan to reveal his identity to the whole city, after telling Gordon the truth (at the end of the last series). Batman angrily admits that Jack Napier was right, and doesn’t know how much longer his crusade has left.

At St. Raphael’s hospital, Jean-Paul Valley, an older military veteran and former experimental subject, receives a cancer diagnosis. He rushes out without dressing, violently attacking anyone who gets in his way. His friends, including Michael Lane, try to help him as he rushes naked into a church, but he collapses into the memorial candles, starting a fire around himself.

At the GTO headquarters, Babs urges Bruce to talk to somebody. He says he’ll call Leslie, but then moves on to talk about the Joker case. He tells her that the body in the well belonged to Lafayette Arkham, called “Laffy,” and rumored to be a vampire. He shows Babs the diary of his ancestor, but says it will need careful restoration before he can read it. He also found a bat leather whip along with the diary, and heads out of Babs’ office to investigate further.

At the church, a priest asks Jean-Paul, who works as a janitor there, how he’s doing. Valley responds that he has six months to a year, depending on chemotherapy. The priest leaves, wishing Jean-Paul well. The lights flick off, and the Joker appears, giving Jean-Paul a flaming sword and calling him Azrael. The Joker tells Valley there’s a deep secret in his history, and tells him to save the world by killing Bruce Wayne.

Analysis: Last year’s Batman: White Knight burst onto the scene of Batman fandom like a wildfire, winning over fans and skeptics alike. Though I personally wasn’t completely won over by Sean Murphy’s bold writer-artist vision in the first series, the opening of the second promises the kind of richness and complicated exploration of character and theme I relish.

Murphy’s masterful storytelling appears in the careful yet completely dynamic layouts of his pages, drawing the eye expertly from action to action, from gorgeously sketchy visual to visual. The splash pages and two-page spreads really show what someone who takes time to tell the story the best way possible can look like, and the exquisitely muted color work by Matt Hollingsworth raises Murphy’s linework brilliantly. By employing a not quite two-tone palette, Hollingsworth really highlights the bloody action, haunted flames, and cold insanity of the various settings and characters.

On the writing level, Murphy’s sense of the characters remains solid. None of the lines are particularly amazing, and the character voices are still a bit subsumed in the necessary expositional information each line relays to the reader, but everything revolves around the story quite well. The “restoration” of the diary seems like a slightly clumsy way to slowly reveal information across the series, but other than that, the plot is nicely set up and played out, unlike a lot of artists turned writers. Additionally, the way Murphy blends references to the rich history of Batman by including Michael Lane as a supporting character for Jean-Paul Valley, calling back to Grant Morrison and Fabian Nicieza’s second Azrael character, as well as his own creations of Lord Edmund Wayne and General Lafayette Arkham, makes this issue a delight for newcomers and longtime fans alike.

Murphy, along with Hollingsworth, is determined to make his second foray into this alternate universe as enjoyable and worthwhile as the first series, and hopefully even more, now that the groundwork has been laid. I eagerly await the next installment, as well as the promised expansion of the universe as Murphy invites other creators to contribute to future stories.

Final Thoughts: Curse of the White Knight arrives with just as much bang for the buck as anticipated – a stellar first chapter of this dynamic Elseworlds narrative.

Editor’s Note: In celebration of the release of the first issue, DC has released a special trailer for the series and asked for us to share it with our readers.