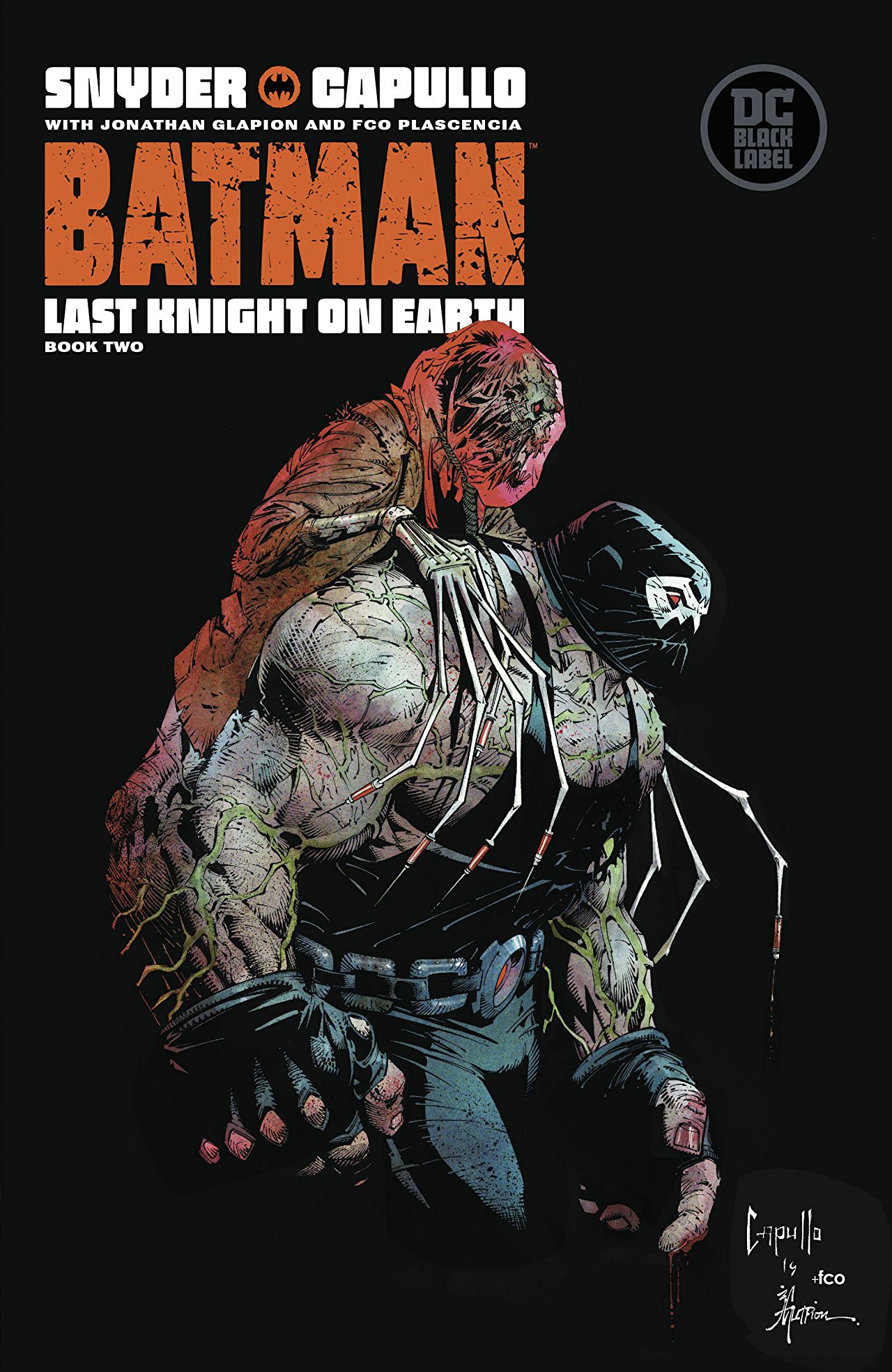 Overview: Batman and Joker’s head travel in search of Superman but their journey takes a surprising turn.

Synopsis (spoilers ahead): The issue opens with Batman dreaming about trying to solve the case of the boy in Crime Alley that we saw at the beginning of the previous issue.  He’s in Joe Chill’s apartment questioning him because the DNA suggests the boy is Chill’s son.  Chill reveals he knows who Batman is and says this will be the last case Batman ever solves.

Batman wakes up next to Joker’s head in the middle of the desert.  They seek shelter from a speed force storm and Batman hears all the Flashes crying out for help in the storm.  He is unable to help them so he moves on.  He uses a glider to fly over the area that was once Fort Waller and Joker tells the story of what happened there.  It was originally a place of great promise to create new superheroes that had devolved into a war between the Parliament of the Red and Green.

Elsewhere, Bane and Scarecrow are sent by Omega to find Alfred.  Alfred tries shooting them with a gun but Scarecrow manages to inject him.  Omega appears and lies to a drugged Alfred that the Waynes are not going to see a movie and that they are safe.  Alfred appears to die.

Batman eventually gets to the Fortress of Solitude when a rocket crashes into it.  A dazed Batman is picked up by a bearded Superman.  The bearded Superman takes Batman deeper into the Fortress to a recreation of the Kent farm.  It turns out that Luthor is living there and that Superman isn’t real but just a bunch of prototype facsimiles.  Luthor explains how Superman met his demise.  He publicly offered Superman the chance to debate him on the nature of good and evil in front of the world.  The world would then “vote” and kryptonite shards would kill the loser of the debate.  Superman appeared to win the debate in the minds of the debaters, but the world apparently voted “doom” and Superman is impaled and killed on Kryptonite shards.  Now, Luthor explains to Batman that he’s using Brainiac tech to try and bring Superman back from another time and space.

At that moment, the bearded Superman attacks them because it turns out that Scarecrow and Bane have drugged all the fake Supermen.  Wonder Woman appears and saves Batman and Lex from the drugged Superman.  As the rest attack, Luthor opens a portal that transports Batman and Wonder Woman to the Eastern edge of the plains and stays behind as a diversion.

Batman and Wonder Woman are transported to the Spectre’s empty cloak that serves as a portal to the underworld.  Wonder Woman takes Batman on a boat across the river of the dead.  Batman sees all the dead Justice League members on the shore and is surprised to see Alfred there because it means he has also died.

They pass through the underworld and go through Metropolis and Washington before finally arriving in Gotham.  Batman is shocked at the state of the city and sees Omega’s anti-life symbol in the sky.  The duo is then surrounded by Talons from the Court of Owls and the leader reveals himself to be Dick Grayson.

Analysis:  I thought the first issue set up a really compelling premise and story but the second installment of the series fails to capitalize on that momentum.  This story was billed as this creative team’s “last Batman story” but so far it has more connections to the current Justice League run than the team’s previous Batman work.  The main villain of this story appears to be Omega, but he has only been on one page of the story and there’s only one issue to go.  That wouldn’t be too much of a problem if we learned more about him from other characters, but this issue doesn’t provide any additional information to what we were told in the first issue.

Some of the pages in this issue seem to be spent on things that don’t really have any relevance to the story.  For example, I do not see the relevance of Batman dreaming about the Chill case when it has already been established that it is just a dream or “hereditary memory” from a previous Batman.  Of course, the final issue of the story could provide more context that changes my opinion on that, but as of right now, it seems superfluous.  The Batman and Joker dialogue also seemed a bit off to me in this issue.  Joker had some good one-liners that made me laugh, but a lot of his lines seemed repetitive and unnecessary.  It also appeared that Batman’s voice was a little too talkative and yet coarse at the same time.

I also didn’t think the way Superman died was plausible.  I find it hard to believe that Superman would agree to such a debate when it would mean the loser would die.  I know he believed that people would vote “justice” and that he’d save Luthor, but it seems like a huge risk to take especially when kryptonite is involved.  That being said, the way Snyder writes Luthor recounting the story of Superman’s speech was undoubtedly moving. The way it was executed in terms of the voting seemed too convenient and just a way to tie it to Justice League. Speaking of convenient, Wonder Woman appearing at exactly the right time to save Batman seemed odd.  Especially since they appeared to part ways at the end of the previous issue.

What I do want to continue to point out as a positive is the sheer creativity of imagining the setting of this post-apocalyptic world.  Snyder clearly has so many ideas of how these events played out across the world of the story.  We get hints here and there, some more developed than others, but it feels like there’s not enough space to develop everything.  Unfortunately, it seems like in the course of trying to set up the world, the main storyline with Omega is being neglected.

The art in this issue is more colorful than your typical Batman book.  That’s not to say it isn’t good, only that it works better in the shadowy, subdued tones of Gotham City.  We see that in the last few pages of the book with the Court of Owls and in the underworld.  But aside from that, it’s a very solid job from a veteran art team.

Final Thoughts:  The plot in the second installment of the series stagnates and doesn’t capitalize on the stellar start in the first issue.  However, the creative setting and good art remain constant.