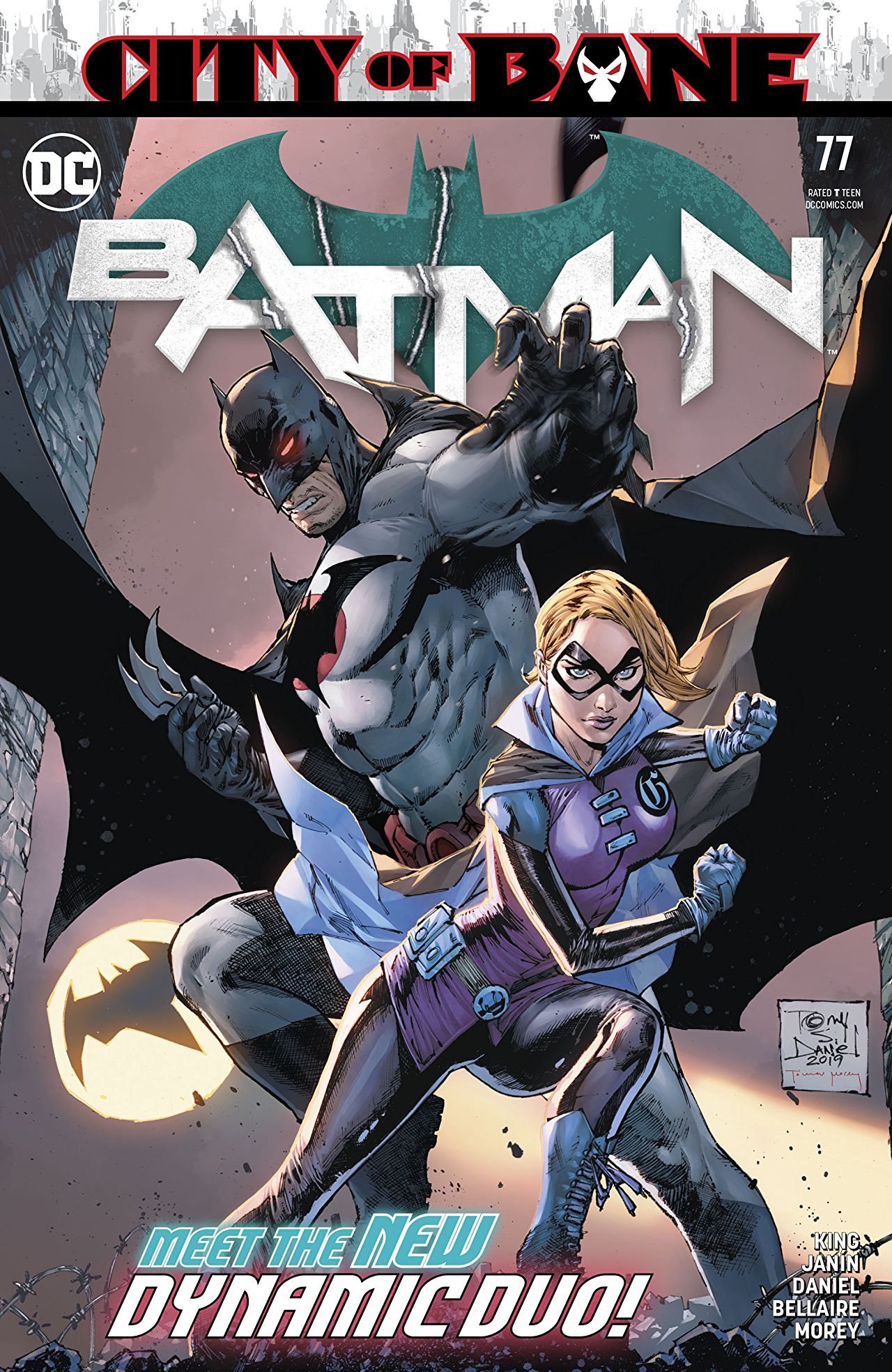 Overview: As Bruce Wayne recovers from his injuries, a member of the Bat-Family enters Gotham to take on Bane.

Synopsis (spoilers ahead): The story opens on a Gotham City rooftop where Robin (Damian Wayne) is dodging heat vision blasts from an airborne Gotham Girl. As Gotham Girl closes in for the kill, Robin produces the “Wand of Klarion” which causes magical chains to appear which wrap around Gotham Girl as Robin makes his escape.

In Paris, as a singing Selina Kyle cooks dinner, the injured and unconscious Bruce Wayne opens his eyes.

Back in Gotham, a Psycho-Pirate controlled Scarecrow and Zsaz, now part of Bane’s “police force”, accost a dog walker over leash law rules when they are attacked by Robin, who quickly takes them down.

Over in Paris, Bruce sits in silence and Selina comes near, with Bruce uttering with his head down that he lost.

Thomas Wayne’s Batman stands on a gargoyle as Robin appears behind him. Thomas tries to speak with him, which is met with a punch to the face, as Robin tells Thomas that they aren’t actually related, that he isn’t Batman and that Robin is here to beat him into the ground.

Bruce and Selina sit in a café in Paris, with Bruce explaining that he needs to go back to Gotham City. Selina points out that he will be killed and Bruce responds that it would be a good death.

As Thomas and Robin fight, Thomas points out that the penalty for Robin entering Gotham is the death of Alfred. Thomas gets the upper hand, knocking Robin to the ground and then knocks him out.

As Bruce and Selina walk through the streets of Paris, Selina protests Bruce’s willingness to go off to his death in facing Bane. Bruce tells Selina he has thought of every scenario and that there is no other way. Selina tells Bruce that he can’t see everything and that he “still can’t see” her.

Robin wakes in Wayne Manor, injured and bound to a chair as Thomas Wayne speaks to Robin about how what to come is not his choice. In the background, a voice pleads out “not in front of the boy.” Robin then yells in horror as he witnesses Bane in front of him, snapping Alfred’s neck. As Robin cries in disbelief, Thomas comments on how Robin is now their hostage and how he hopes the rest of the Bat-Family will listen.

The issue ends with Batman and Catwoman, in costume, with Catwoman telling Batman that she knows a way to get revenge and take back Gotham.

Analysis: Well, lets just cut to the chase here: Bane snaps Alfred’s neck in this issue. It’s a moment that is designed to shock and horrify and it does just that very thing. It’s also a moment that carries with it a lot of questions, chief among them: Is Alfred really dead? I’m not sure. While having one’s head torqued by a steroid-popping supervillain like a stuck jar of pickles would typically be pretty fatal, as the issue also has a flying woman and a magic wand, so let’s not pretend that there is no room to come up with a reason for Alfred to survive this. Given that there has yet to be a Batman movie, television series, or video game where Alfred has not made an appearance, the idea of taking him off the board permanently seems unlikely.

I think the more interesting question is should Alfred be dead? The thing about books like Batman is that the main cast of characters is very seldom in any real danger. Lois Lane will always be rescued by Superman, for instance.   I’m not advocating for Alfred to really be dead, but if the people that surround Batman are never in any real danger, it does rob the stories of any real stakes, so I can see the temptation to do something bold to make the story more impactful.

If you are going to really take a character as central to the Batman mythos as Alfred off the board, it better mean something.   It can’t just be for shock value and has to mean something to the story. As much as I have enjoyed Tom King’s run on this title, this book simply hasn’t had much of a focus on Alfred, so I can’t help but wonder if in the context of the story as a whole, that if Alfred is indeed dead, that the moment doesn’t serve as anything other then a tool to make things worse before Batman inevitably defeats Bane.

The rest of the story is very well executed. Tom King has a real flair for writing Damian and I hope that going forward, Damian has more to do in this title. I enjoyed the callback to Batman #34 in Damian’s takedown of Gotham Girl. It was a fun and fairly badass moment. Damian is a character that is very hit or miss for me, as I think that he is often relegated to being portrayed as an insufferable jerk which, frankly, gets old very quickly. Here, Damian is portrayed as uncompromising and arrogant, but I like that Damian, as well as Alfred, suffer serious consequences thanks to Damian’s hubris. It would be interesting, going back to having Alfred’s death possibly mean something, if that served as a very sobering lesson for Damian as a character going forward.

Bruce and Selina get some nice moments in this story, and I like Catwoman’s function in this story to essentially call Batman on his BS, which is an aspect that I have missed since Catwoman’s lack of a presence in the title. I do think that the story needs to give a little bit more information about what happened between the time jump between issue #74 and #75, as I think there are some gaps that can’t simply be explained with a single line about how Bruce lost.

Final Thoughts: This issue is either a landmark moment in the Batman mythos or a dramatic fake-out. I think I’m good with either way the story wants to go, providing that the story makes meaningful use of Alfred’s situation. I’m looking forward to the next issue.