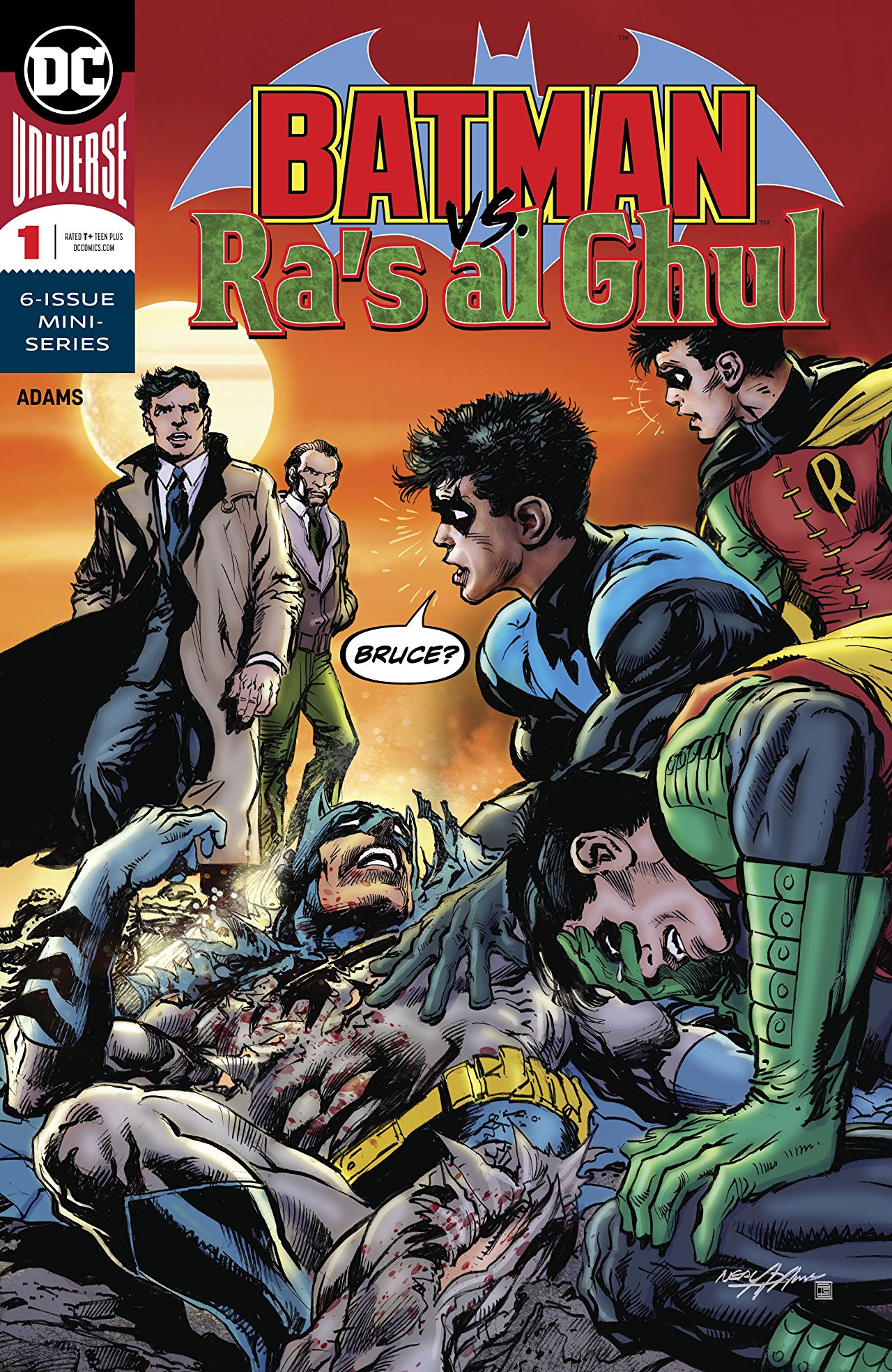 Overview: As Batman struggles to save a Gotham ruled by chaos, the city’s leaders appeal to the Demon’s Head for help.

Synopsis (spoilers ahead): Our tale opens as a man and his dog run from Batman through the streets of Gotham. The man wears a dog collar which is attached to his pet, which in turn is surrounded by a vest of dynamite. They are not quick enough, however, before Batman appears and severs the leash binding the two. The man protests in desperation, not wanting to live (nor die) without his canine companion. Batman tells the man to follow his friend, then, and the man watches in horror as Batman tosses the separated bundle into the street, and it explodes. The man, now in mourning, berates Batman, telling him he’s done nothing but caused the withered husk he just saved more pain than his life was worth. After allowing the grief-stricken man his say, Batman opens up his cape to reveal the very much alive Stoker, the man’s beloved dog that Batman had managed to divest of the dynamite. Reuniting the two, Batman takes off, his day far from over.

Elsewhere, Deadman looks on in shock as he arrives at a decimated Gotham City. The skyscrapers and the very streets are on fire. We are treated to an exposition from an anchorman as he provides commentary on a news broadcast:

After the Justice League had defeated a Kryptonian invasion of Gotham, the city was overrun by terrorists armed with explosives and guns. They seem to be targeting power plants. At this point in the broadcast, the anchor pauses to detail a live feed from Gotham, showing Batman doing his best to thwart the terrorists with as little harm as possible. But a paramilitary group is also on the scene, not hesitating to kill the subversives. Batman, noticing the bloodshed, turns his attacks onto the militia. The anchorman then brings us back to the origin of this crisis.

Jim Gordon, inspired by his recent visit to Japanese nuclear power plant accident sites, returned to Gotham and initiated security measures that would hopefully keep Gotham from falling into the same straits. One of the first steps was to shut down all reactors for six weeks, causing the city to depend on out-of-state resources for energy. However, when the power grids went offline, terrorist groups began to emerge and the dismantling of the city began.

The reader is then brought back to the present as Batman pierces his way into the heart of the destruction, ordering Alfred to deploy drones to him both as weaponized backup and as recording tools to dissect the chaos later on.

In the center of it all, surrounded by escaped inmates hanging on his every word, is a mech-suited figure telling the rioters to destroy as much as they can as it will make it more difficult to identify them later on. Before they can carry out their missions, however, Batman interrupts the speech by firing missiles into the bedlam as the literal bat-drones arrive deploying concussion grenades and forming a strategic net to gather the terrorists together. Batman orders the terrorists to desist upon threat of injury, or they can follow their leader, who we are then introduced to as Khaos. We then see more of Khaos, who appears to not be human at all, but rather something between an android and an alien.

After some confusing banter, Batman and Khaos collide, with Batman taking the alien down handily. Before he can begin to question him, Batman is told not to bother by the voice of an inmate who is restraining other downed rioters. This inmate reveals himself to be Boston Brand (aka Deadman) and informs Batman that Khaos is a vacant shell of a being who, being unable to be used as a vessel for Deadman, has no mind to interrogate.

Suddenly, both Khaos and the inmate (from whom Deadman is able to jump out of just in time) are shot in the head. Batman whips around to see another paramilitary unit, guns pointed in his direction, and between him and them is Ra’s al Ghul. Al Ghul informs Commissioner Gordon (whom he is apparently working with on this development) that they have the leader of the terrorist group, as well as the Batman.

Our anchorman again cuts in to tell the viewers that Professor Ra’s al Ghul has merged his ‘security force’ with the GCPD to assist in bringing order to Gotham.

Batman and Ra’s are joined by Gordon and Mayor Atkins for a parley. Batman orders Gordon to arrest Ra’s, but the mayor and Gordon himself intervene on al Ghul’s behalf, saying that they need his assistance to help clean up the city’s mess. Batman, unable to dissuade the city’s leaders and disgusted by the entire situation, leaves as Ra’s, Gordon, and the Mayor continue to plot their next moves.

We follow three escapees as they deliberate their own next moves. Through them, we are told that ‘Brother Khaos’ has supplied the terrorists with drugs that make them ‘fuzzy and angry’. They ultimately decide to ditch their weapons and find a way out, but not before Batman performs his silent takedowns and allows one just enough consciousness for Deadman to possess. No sooner is Boston Brand back in business, however, than our two heroes are approached by another Khaos. Batman deduces that these beings are being controlled remotely and with motion-capture tech. As Batman easily takes him down again, Deadman is able to see the trail of a signal leading from Khaos and abandons the criminal’s body to follow it to the source.

Nearly as quick as thought, Deadman tracks the signal to a laboratory where he finds Khaos’ controller; a groovy hep man wearing a mind-and-body control apparatus. Deadman possesses him and gets to work on controlling Khaos and, through him, communicates with Batman to map out the next steps.

Ra’s al Ghul and Gordon receive a feed telling them that Khaos robots are sending the escapees back to the institutions they had come from. They decide to disable the robots, but when Ra’s activates his device, the robot explodes. As they look upon the wreckage, they notice three figures rushing towards it; Nightwing and two Robins.

Fire covers a fair amount of ground, inside of which we see robotic limbs but, more importantly, a blood-spattered cape and cowl. Nightwing and the Robins hope that Batman escaped, but fear the worst. A few seconds later, Ra’s al Ghul, Commissioner Gordon, and another man rush over. The man is dismayed to see that Batman must be dead and offers Nightwing and the Robins his condolences before he is taken home by Ra’s and Gordon.

The three vigilantes look on in confusion, wondering what has just happened, because that man accompanying Ra’s al Ghul and Commissioner Gordon was…. Bruce Wayne?

Analysis: This first installment of the miniseries is a world-building exposition-heavy with action and manages to fit in quite a bit of plot, as well. I believe the first scene we get, with Batman pursuing the man and his destructive dog, is the ultimate goal of the story. The dog, Stoker, has been harnessed with a dynamite vest and attached to his owner by a leash. The leash itself isn’t dangerous; the man is willfully tied to Stoker, life and death. Stoker can be analogous to Gotham City, which we later see in flames and abandoned. The man might represent the city’s leaders and Batman himself. They are unwilling to separate themselves from their beloved city and, success or failure, never abandon her, but share the same fate. Everything else in the issue is plot-building and mystery designed to play to that end. Deadman, I believe, is us…the reader. He possesses criminals in order to aid Batman as we follow Khaos and Ra’s al Ghul on the path to solve the mysteries of what exactly is going on.

With regard to the story-telling, what exactly IS going on? I’m not sure if I’m unable to pick up on the subtleties of the writing, or if writing is not Neal Adams’ strong suit. I’ll try to give the benefit of the doubt to the writer, as this is the first issue, meant to draw us deeper into the story that follows. That being said, however, there are some head-scratchers for me.

Early on in the story, right after we are introduced to Deadman as he watches Gotham burn, there is an Editor’s Note that says ‘See “Cataclysm” and “No Man’s Land”’, which are two subsequent storylines from the 90’s that dealt with an earthquake that found Gotham City cut off from the rest of the United States and sliced into several territories owned by various villains, gangs, and the GCPD. Given the Editor’s Note, I assumed that this story took place in the same timeline and plot of those mentioned. However, Gotham’s destruction in this tale does not match up at all with the Cataclysm. It’s almost as if the Editor’s Note was placed there to put us in a frame of mind. More like ‘Imagine Gotham City is in as dire circumstances as it was in those stories’. A bit confusing.

Another one is some of the dialogue, particularly what happens when Batman meets Khaos, where the latter seems not to understand what Batman means, while Batman spouts off some attempts at humor. Khaos’ reactions seem more of a setup to Batman’s ‘punchlines’ than what we could actually expect from such a meeting. Then we have, in the final scene, Nightwing and two Robins (One is DEFINITELY Tim Drake which….props, by the way!… but it is unclear whether the other is supposed to be Damian, which I’m assuming, or possibly Jason Todd) deliberating what the abandoned and bloody cowl means. The voices of our heroes seem vacant and are definitely not the voices of the crime-fighting teens we have grown with over the years, but instead, the voices of frightened lost kids.

The other qualms I have about this book (how Ra’s al Ghul entered the trust of Gordon in the first place, the sudden takeover of the terrorists, Deadman’s involvement) I feel will be explained as the series progresses. This is the first issue of the arc, however, and perhaps it is meant to raise more questions than answers.

The art is quintessential Adams. From the classic design of the Batsuit to the hairstyles of the main characters. Even the design of the cover title. This LOOKS like a 1970’s-early 80’s book. Good quality but a little jarring when placed not only next to current continuity art, but even when placed next to the ’90s with the storylines that the Editor’s Note referred to.

Final Thoughts: I’ve got to admit this is a rough first issue for me. I don’t know if I can place the story, based on the art style specifically but also that callback to No Man’s Land that isn’t actually a callback to that event, in a concrete timeline, and that bothers me a little. I think some of the writing gets tripped up and has the unfortunate effect of downgrading the potential of Adams’ intent. Taking this for what it is, I’m hoping for a deeper story to take place; but for now, I can’t honestly say I’ve enjoyed what I’ve read so far, but I’m not dissuaded enough to drop the book.