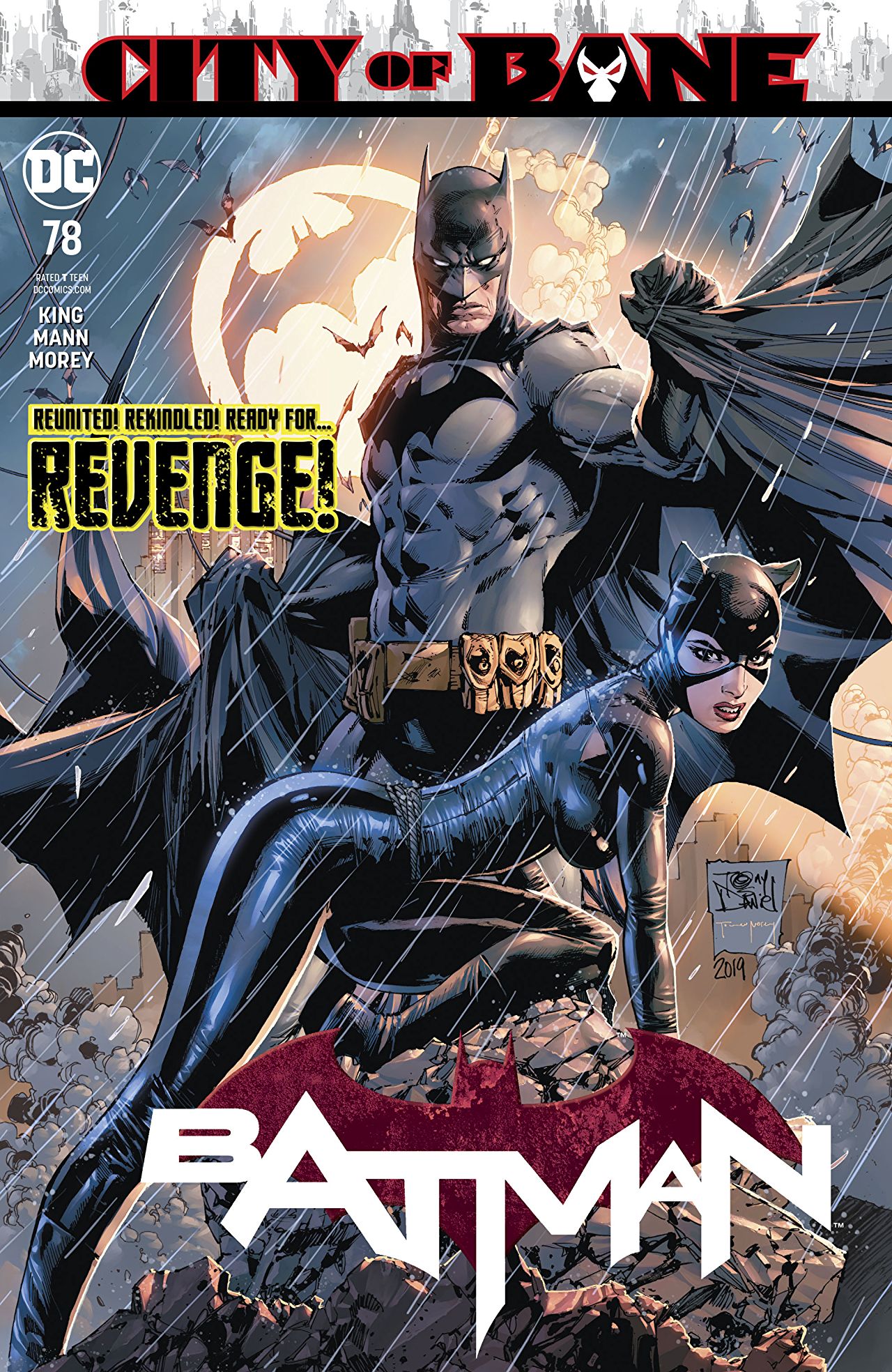 Overview: Bruce and Selina have a long-overdue conversation.

Synopsis (spoilers ahead): The issue opens with a flashback to 1940’s Batman #1 where Batman is bandaging a captured Selina Kyle’s ankle.

The issue then flashes to the present where a mustachioed Bruce Wayne and Selina Kyle kayaking through a tropical ocean. Selina asks Bruce how he feels and she responds that she likes how he lies. As they go ashore and lie on the beach, Bruce asks Selina what he wants her to say and again says that he is fine. Selina states that she believes him and now it’s Bruce’s turn to call Selina out on a lie.  The two then get a drink at a resort bar where it’s revealed that they are staying under Bruce’s Matches Malone identity. As they sit on the beach, Selina asks Bruce what they were and Bruce responds that it doesn’t matter.   Bruce then speaks about how the one thing that can defeat Bane is coming to that beach and in the meantime, Bruce is training and recovering from his injuries.

The two go rock-climbing, in costume, as they talk about how Selina still has the ring that Bruce gave her and the two share a quiet moment at the top of the cliff. As the two sleep in separate bedrooms, they talk through the thin walls about how she knows Bruce is still awake. Bruce again states that everything is fine and Selina again calls him a liar.

The two then stand in costume on top of a waterfall before diving into the water below. As they surface in an embrace, they almost kiss before Selina says no and swims away, leaving Bruce to pull his cowl back into place.

Bruce and Selina sit in front of a fire and talk. Selina tells Bruce that she used to think about a future where they grow old together before saying that while when she left him, she thought she was doing something heroic to give the world Batman, but that if it had truly been an act of heroism, she wouldn’t have wept afterward, waiting for Bruce to come to her. Bruce admits that he waited and wept too.

Batman and Catwoman then face each other on the beach as the sun rises. Catwoman tells Batman to throw his batarang as he means it, whipping it in his direction. Catwoman tells Batman to throw the batarang like he is angry, speaking about how Batman should be angry for making the decision for both of them that cost them their relationship. Batman drops the batarang in the sand, telling her that Catwoman didn’t do this to him and that she only sensed things that he thought about himself, as Catwoman pushes him away. Batman speaks about believing that he needed to be alone to be Batman, stating that after being brought so low that he realizes that it is not their pain that makes them what they are, but that they live to fight their pain, and then admits to Catwoman that he’s not fine and the two kiss as the sun continues to set. The two have one more flirty exchange before ending the issue on another kiss.

Analysis: I think when we look back at Tom King’s run on this title, this issue will be something of a centerpiece. This is the type of story that plays directly into King’s wheelhouse of slightly quirky and emotional character moments and it is where I think King is at his best.

There is something beautiful and absurd about taking these two creatures of the night and having them sort out their problems in the more antithetical setting possible, that of a bright tropical paradise.   While they haven’t really revealed what exactly the reason is for Batman and Catwoman to be there in the first place, as this whole arc has been set up as something of a sweeping love story and the setting affords some grand moments that I think pay off nicely throughout the story.

King does an effective job of capturing the hurt and distance between the characters and I like that Bruce and Selina kind of circle each other, calling each other on the lies that they tell each other before eventually getting to a point of actually talking at the end of the story and King does a great job using dialogue and moments of silence to set up the characters.

This whole arc has been an examination of the concept of whether or not Batman can be Batman and be happy, and this is clearly King’s final argument on the matter that, yes, in fact, he can. I like that Batman comes to this realization himself without having someone spell it out for him in crayon and that the conversation he has with Selina on the beach is something of a moment of clarity.   I also appreciated that the conversation is just as much about Selina’s tremendous guilt over leaving Bruce at the altar. I’m glad that the book isn’t just focused on Bruce figuring that out as it is a scene of the two of them figuring it out together.

I can see an argument for keeping the momentum going in the story and having Batman and Catwoman go on the offensive against Bane before taking an issue to work out their relationship issues but I think that given that Bane weaponized those issues to break Batman, its only fitting that Batman and Catwoman getting back together is a factor in Bane’s event downfall.

There are a lot of references, subtle and not so subtle to other parts of King’s run and Batman lore on the whole. The story opens with a recreation of one of the final panels from Catwoman’s first appearance in 1940’s Batman # 1 and I think its interesting that after the constant debates between Bruce and Selina about how they met, referencing Selina’s first appearance and her Year One revamped origin, that in this issue that they both seem to acknowledge the first appearance origin as how they met and wonder if that is King settling the argument.   I also appreciated what seems to be a sly reference to Batman Annual #2 where Catwoman talks about fantasizing about the two of them growing old together and I wonder if this is King’s way of tying that issue into the overall story.

The art by Clay Mann is nothing short of gorgeous. As much as I appreciated the bigger moments of the story, such as the climactic moments between Batman and Catwoman, my favorite moment is when after nearly kissing, Bruce flips his cowl over his eyes and Catwoman swims away from him. It’s a dark and sad moment that I think speaks volumes without a heavy reliance on dialogue.

Final Thoughts: I get that Batman, as written by Tom King, is not for everyone.   There is certainly a place for Batman as a relentless avenger with no room for anything but his mission, but I’ve seen that story, in many, many places.   I think that this particular take, with a very human Batman who is madly in love with Catwoman, this is a far more interesting and relatable take on the character. I could not be happier that we have twelve issues of Batman and Catwoman featuring this creative team coming next year.