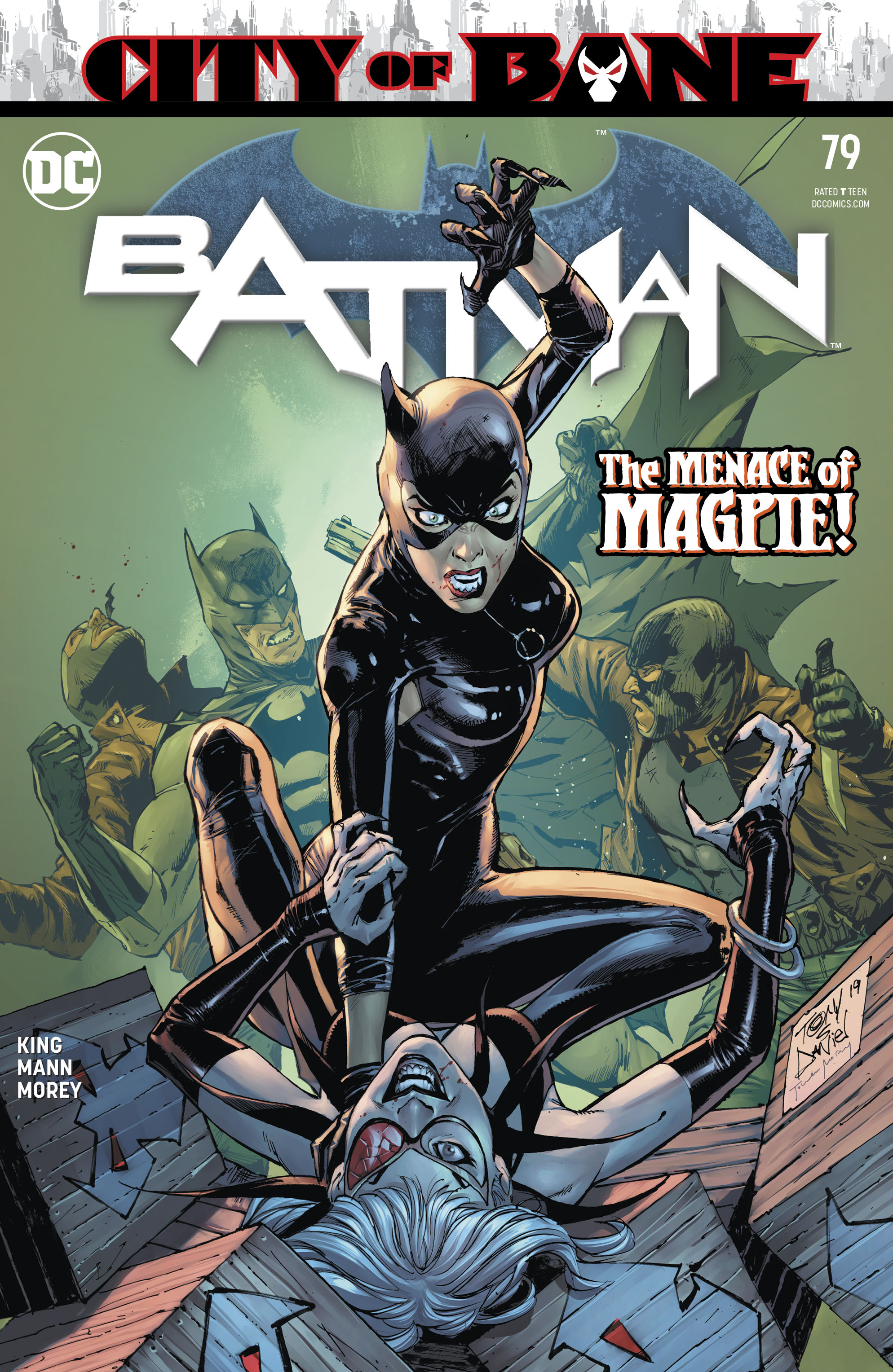 Overview: Batman and Catwoman settle a longstanding argument as they start taking action against Bane.

Synopsis (spoilers ahead): The issue opens with a recreation of a panel from Batman: Year One where Bruce Wayne, disguised as an army vet on his first night of crime-fighting, faces off on the streets of Gotham with a pre-Catwoman, leather-clad Selina Kyle.   The next page cuts to the present (or as the editor note states, prior to the events of Batman # 77) where they talk about intercepting a shipment of stolen venom from Magpie which will help them take back Gotham.

The story then next cuts to Selina doing yoga while balancing on Bruce who is doing one-armed push-ups, during which Selina comments that while they joke about where they met, and while she remembers the incident on the boat, that they really did meet on the streets of Gotham.

Bruce and Selina then have a drink while a news report details Captain Atom’s arrest following the events of Batman #76. The news goes on to report that Gotham is seeing a new era of peace at the price of a more sadistic Batman. A passerby makes a comment approving of the situation and is laid out with one punch by Selina.

Selina and Bruce then return to their room where they share a tender moment before planning to “start kicking some ass” the next day. The story then cuts to a convenience store where a man with a ski mask and a gun demands cash from a nonplused store clerk who casually points out that Batman and Catwoman are behind him. The story then cuts to a splash page of the two masked heroes stopping various crimes while in the captions, a conversation continues between Batman and Catwoman where Batman again insists that they didn’t meet on the street.

Batman and Catwoman watch a sunset while Batman tells Catwoman that Alfred has signaled that he is safe and that he is sending Damian into Gotham (as seen in Batman #77). The two then take a moment to watch the sun go down as they tell each other “I love you”.

The two then board a yacht where they take down Magpie and her crew and seize her supply of Venom. Magpie, who is told she is free to go, assumes that she is to deliver a message to Bane, to which Catwoman replies, snatching the diamond from around Magpie’s neck, that they are Batman and Catwoman, and that they are the message.

Bruce and Selina then walk on the beach, and after telling Selina that she can’t keep Magpie’s stolen diamond, Bruce takes a moment to thank Selina for taking care of him and then explains that he doesn’t consider them meeting on the street their first meeting because it was before he knew who he was, before he had become Batman. Bruce then says that maybe he is more than just the Bat and the issue ends with the two agreeing that they met on the beach.

Analysis: In any serious relationship, there are always those moments that each person in a relationship remembers differently. To this day, my wife and I continue to argue over who initiated our first kiss, for instance. Throughout Tom King’s run, Bruce and Selina have a similar running argument over how they met, with Batman stating they met on a boat, from Catwoman’s first historical appearance in 1940’s Batman #1 and Catwoman stating that they met on the street, referencing Frank Miller’s Batman: Year One. There have been a lot of fan theories about this argument, such as that this is tied in some how to the murky continuity of the last few years and that there are alternate timelines at play here.   I never bought into these theories, as I prefer it as an ongoing piece of banter for two characters who have just been in each other’s lives for so long that the joke has overtaken the actual point of the argument.

Now that Batman and Catwoman have gotten back together, Tom King has chosen to take a moment to resolve the argument, in a way that I feel is earned and nuanced. I like how King has chosen to marry together two divergent origins for Catwoman and make both stories both perfectly valid parts of the history of the two leads of this story. They both happened, one just happened before the other one.

I also like that the argument is resolved as part of the overall theme the book has been exploring as to whether or not Bruce can be Batman and be happy. One of the unique things about King’s run in this title is that he has actually done things to change Batman as a character in a way that I don’t think we’ve ever seen before. In other stories, Batman has fought psychopaths, had his back broken, and even been lost in time after going toe to toe with Darkseid, but from the start of the story to the end, Batman is still pretty much the same character he was at the start of the story, and the end of the story usually ends with Batman, still the driven loner, with nothing but his mission and a stone gargoyle to keep him company.   I like the idea that Bruce may have actually grown beyond his life as Batman, as shown in moments where Selina breaks down a typical conversation between the two of them where Bruce would exclude her from his mission that would normally end in an argument, but in this case has Bruce only remarking how beautiful she is.

The other interesting development in this story is that prior to the event of Batman #77, Alfred sent some sort of signal that he was safe and that Damian was acting under orders to infiltrate Gotham. This raises a lot of questions but I think the biggest one is does this mean that Alfred’s apparent death and Robin’s capture an elaborate ruse that is just part of Batman’s plan to take back Gotham, or has something gone horribly wrong?

The addition of Magpie is also a welcome use of another Z-grade villain and I like her inclusion here, if for no other reason then it’s just more fun to use this character then to use some generic mobster working for Bane.

Clay Mann’s art continues to be a standout, and he excels at drawing beautiful people in a beautiful setting, which is what this story calls for, and the Batman: Year One throwback is a standout for me, as is Tomeu Morey’s fantastic work with the colors in this issue, particularly the sun setting vistas throughout the book.

Final Thoughts: As I’ve said previously, Tom King’s Batman isn’t big action sequences and super heroics, but his flair for character has given us a very human take on an eighty-year-old character in a way that I don’t think we have ever seen before. I am looking forward to seeing where the story goes from here. And if my wife is reading this, you totally kissed me first.