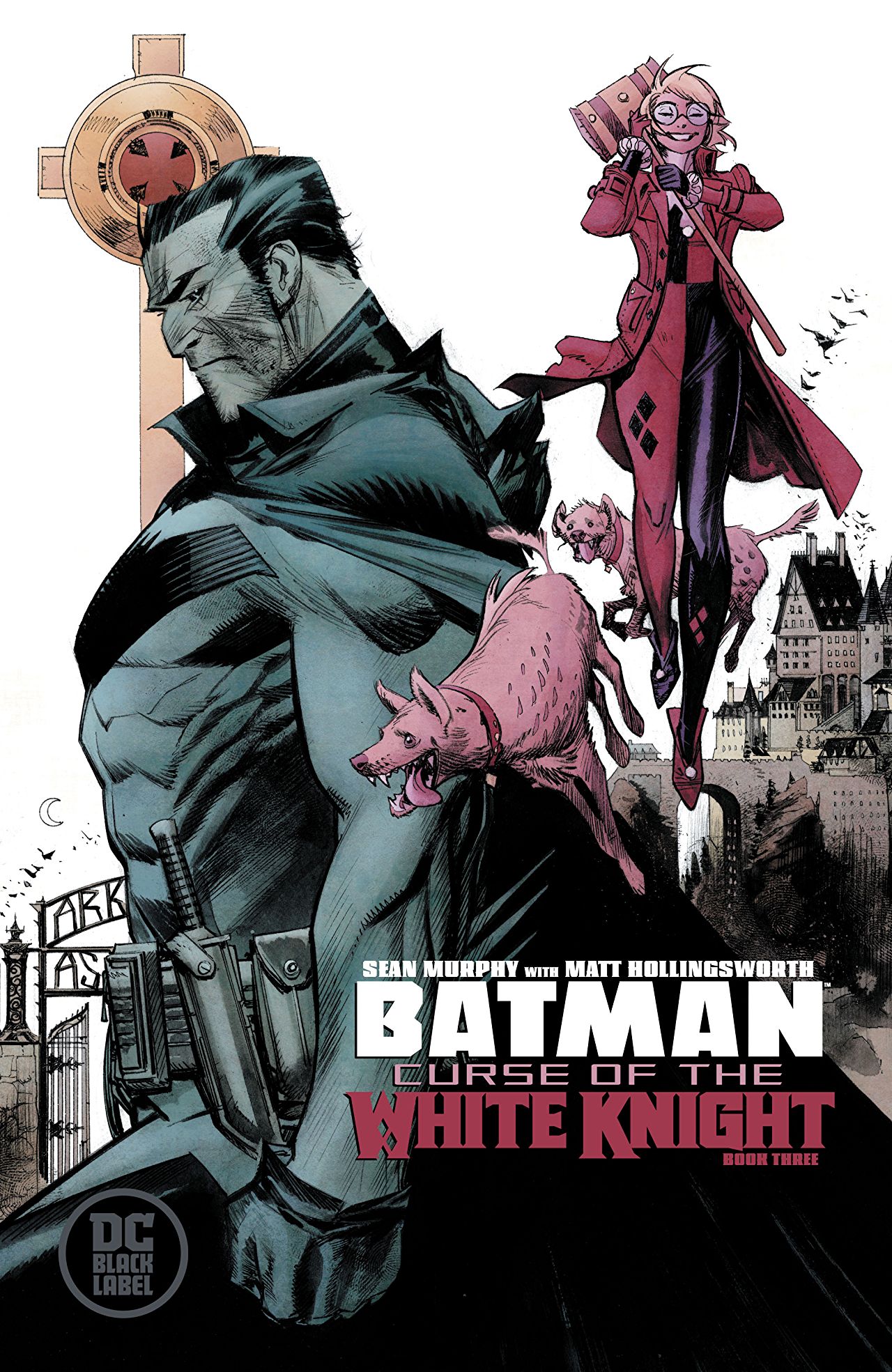 Synopsis (spoilers ahead): The Batmobile, plunging into the yellow flame-lit waters of the river as Azrael destroys Wayne Manor, nearly drags Batman to his grave, but he kicks his way free. Dick, Babs, Harvey Bullock, and the GTO rescue him in a small boat and helicopter, revealing Batman’s identity to the rest of Dick and Babs’ team. Later, Bruce says he planned to unmask, but not like this. He also tells the GTO about Ruth and her dangerous secret power funded by the Batman Fund. Delving into the history of the Order of St. Dumas and the debt his ancestor Edmond Wayne refused to pay, Bruce immediately heads off to recruit the pregnant Harley Quinn to interrogate Joker, unmasking to convince her of his sincerity.

At Arkham, Joker claims that Azrael and Ruth are just opening moves, and Bruce probes into the mystery of Jack Napier’s discovery of Lafayette Arkham. Joker says that the biggest secret about the Wayne family and Gotham will be revealed, and even Harley’s revelation of her pregnancy cannot bring Jack Napier back.

Laters, Gordon, Batman, Duke, and Harley watch all of the former Arkham prisoners being moved while the Asylum is searched for clues. Batman and Harley walk inside the emptied institution, and Harley prods Batman for his reasons for unmasking – possibly even an attraction to herself. She also suggests that Bruce’s ancestor killed not only Arkham, but also Bakkar, the St. Dumas priest who rescued him, and Batman uses X-Ray tools to find another skeleton underneath Laffy’s.

Gordon tells the GTO he intends to step down as commissioner and promote Renee Montoya in his place. Leaving the bar, Gordon thinks he sees Batman and tries to make his peace about Barbara – but the shadowy figure reveals himself as Azrael and viciously attacks Gordon and the GTO.

Batman and Harley continue excavating the skeleton, but Harley goes into labor.

As the GTO pour into the street to defend Gordon, Azrael’s team fires on them from above. Azrael himself thrusts his sword through Gordon’s chest and kicks him off a tall building, brutally ending the life of one of Gotham’s noblest defender.

Analysis: Curse of the White Knight nears the midway point with an issue that makes a surprising, brutal, and interesting choice to kill Jim Gordon. Though the love a lot of fans feel for Gordon is very real, the choice doesn’t quite have the same weight that Gordon’s choice to retire in “Office Down” did. The scene in the cop bar plays with much the same cast and similar thematic notes that Rucka and Brubaker did in that early 2000s crossover, but also highlight just how little Murphy’s Gordon has been developed. His mayoral candidacy seemed to appear in only one scene in three issues, and he didn’t make that strong of an impression in the first White Knight series. Thus, though it does shock and saddens, Gordon’s death doesn’t quite make the impact I could have hoped, nor does Montoya’s promotion have the same weight as her taking on the mantle of the Question in the landmark weekly series 52. While such comparisons are somewhat unfair, I think they do highlight the weakness of this issue (and the first series) – that Murphy tends to let his storytelling and drawing compensate for his dialogue weakness. While his artistic talent is rarely matched, the way he writes characters is often only just functional in moving the plot along, and almost never gets past the sense that you know exactly the emotion Murphy wants you to feel about the characters and their relationships, but you don’t quite feel it directly. The joking of the cops in the bar itself is a really clear example of this weakness – you know that you’re meant to cringe at Harvey’s jokes, but everyone talks in such a stilted, implausible manner that none of the warmth the illustrations convey to make it to the words.

This weakness doesn’t obscure some of the better things about the series, however. The continued connection between the Joker and Laffy Arkham remains a clever bit of wordplay that combines history (the Marquis de Laffayette) and the Joker’s trademark wild laughter without feeling forced or overly pat. The final battle between the GTO and Azrael’s forces, highlights Murphy’s excellent storytelling, aided by Matt Hollingsworth’s gorgeously controlled colors – muted, startling, and bloody. The geography of the fight does confuse the eye a bit on first reading – it seems to start in an alleyway overlooked by a parking garage, but turns out to be on a part of the city overlooking another. Cool vertical designs, but throws me for a loop trying to figure out how all the levels work.

Murphy’s choice to feature religion as a thematic element turns a little sour in this issue – Azrael quoting Jesus as he murders Jim is particularly nasty, though it does reflect some significant examples of religion being used to commit horrific violence. It doesn’t really make much commentary beyond that reference, though, so hopefully Murphy will add some layers of nuance as the series progresses.

As usual with this series, Murphy created two covers for this issue. The first features Bruce and Harley in a very “typical” type of cover composition. Lots of warmth and appeal, especially with Harley and her hyenas. However, the alternate cover featuring Jim Gordon functions as a cool but somber tribute to the character’s death, standing out like an old-school crime movie poster, complete with a grimy fingerprint in the lettering of Gordon’s name.

Final Thoughts: The stakes rise in the war between Batman, Azrael, Joker, and the mysterious Ruth in an uneven but powerful third issue.