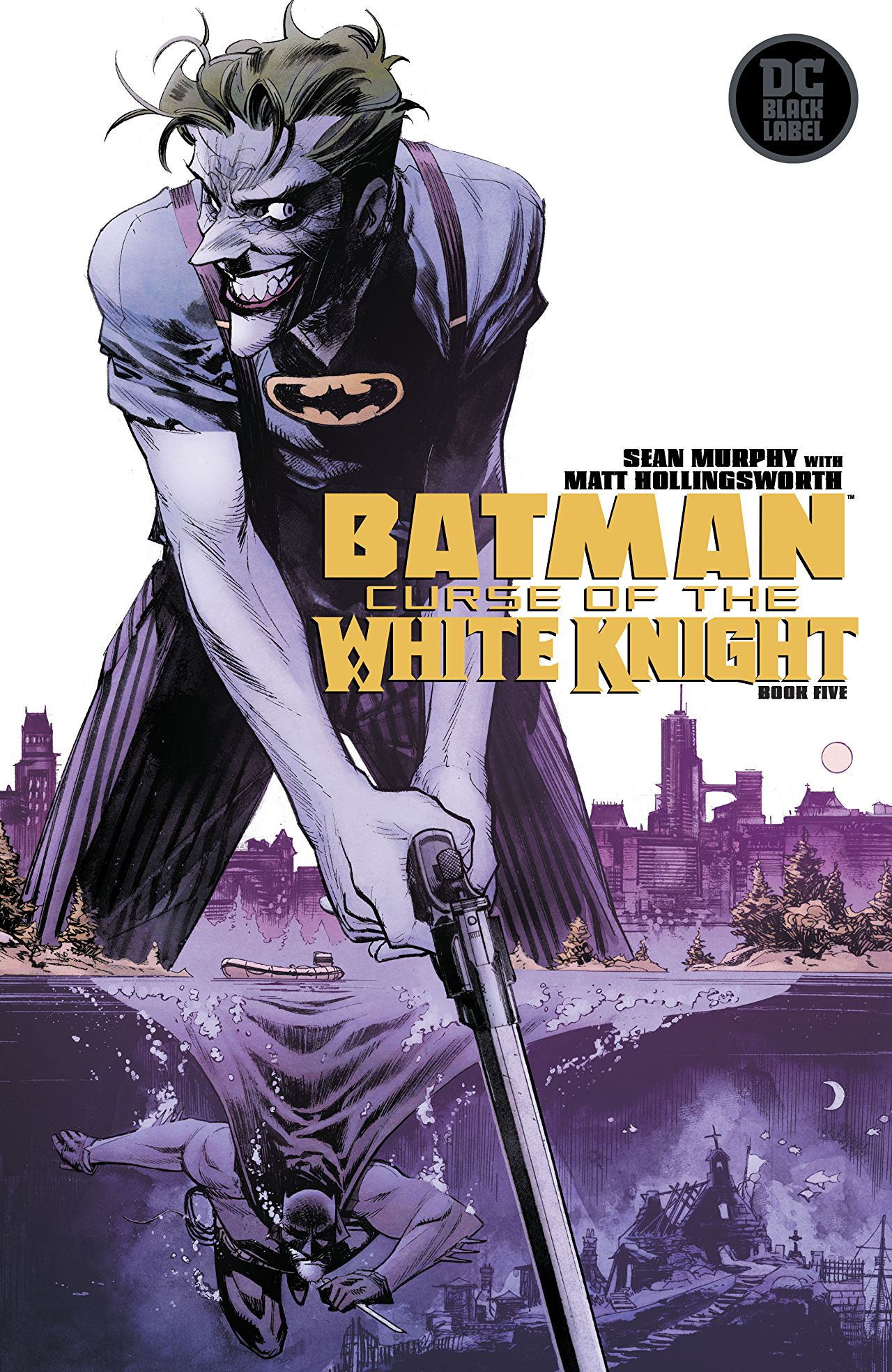 Overview: Batman and Harley get help from Jack Napier in their battle against Azrael.

Synopsis (spoilers ahead): Gotham provides a huge turnout for Jim Gordon’s funeral, including Dick and Barbara, the latter now in a wheelchair following Azrael’s brutal attack. Bruce, notably absent, dives deep in Gotham Harbor, finding a cache of artifacts, including a cross with “Saint Dumas” carved in the center.

At the GCPD, Bullock upbraids Batman when he arrives on his monstrous motorcycle, but Commissioner Montoya negotiates peace. Batman reveals that Edmond Wayne, his ancestor, flooded the original settlement of the Order of St. Dumas that became Gotham. Despite Bullock’s hostility, Batman pursues this lead, following the trail the Joker/Jack Napier left along with Harley Quinn. He persuades Harley to try interrogating Joker again, but without being present, so the Joker won’t be able to push Jack down through his hatred of Batman. Though the interrogation is brutal, Harley does manage to bring Jack to the surface.

Duke Thomas at the GTO finds Azrael and his team’s true identity from the blood Jim Gordon’s bullet left at the scene – Jean-Paul Valley, Gabriel, and Michael, all from the same special operations team, all with an extraordinarily violent and skilled history.

Harley and Jack manage to scour the Joker’s memories, finding both the chapel where Joker activated Azrael, and a message written in blood too devastating for Harley to tell Batman.

Meanwhile, Azrael revolts against Ruth, his sinister moneyed supplier. After decapitating her enforcer, Bane, he extracts the keys to her resources, then slaughters a huge number of Batman’s rogues in Arkham, claiming the title of Batman as he wears his newly upgraded suit of armor.

Analysis: After two uneven issues in the main story, and the excellent flashback one-shot Von Freeze last month, Sean Murphy’s bold exploration of his alternate Batman Universe continues. This issue proves a continuation of the stronger narrative of #4, though once again a few elements hold it back. The choice to put Barbara in a wheelchair, like the choice to kill Jim Gordon, relies heavily on already loving Barbara from other stories outside of the White Knight universe. If your only contact with Babs was from these two stories, there’s little chance you’d be that moved in this issue by her plight, as she has almost no impact whatsoever on the story.

In contrast, one of Murphy’s most successful characterizations, that of Harley Quinn and Jack Napier, shines brightly here, from Batman’s persuasion of Harley to see Joker again, to the initial brutality of the interrogation, to the joint memory session (perhaps a bit overly literalized in Murphy’s visualization, but gorgeously rendered, so forgivable), Harley and Jack take emotional center stage and showcases part of what new elements Murphy brings to the table. The hints of Joker, Edmond Wayne, Laffy Arkham, and the Order of St. Dumas’s secrets are a fun building tension, if a little frustratingly drawn out (a complaint that will likely be resolved upon the completion of the story and the ability to read the whole thing in trade).

Azrael’s next attack, including his unflinching killing of Bane, the details of his napalm sword, the interrogation of Ruth, and the slaughter at Arkham, show both the inventiveness and the limitations of Murphy’s writing. The explanation of Azrael’s sword, though perhaps a bit disappointingly materialistic, fit well with the universe, and provide a great story beat in Ruth’s interrogation. The killing of so many massively important villains, on the other hand, feel unearned, very similar to the killing of Jim Gordon. These characters are meaningful because of other stories, and killing them this way doesn’t do much more than provide a cheap shock. Bane, in particular, deserves more than he gets here, but Murphy’s design for the villain is excellent.

All in all, Murphy avoids some of the pitfalls from issue #3 and propels the story into more exciting conflict next time.

Final Thoughts: Curse of the White Knight returns to the compelling Joker/Harley dynamic of the first series to great effect.