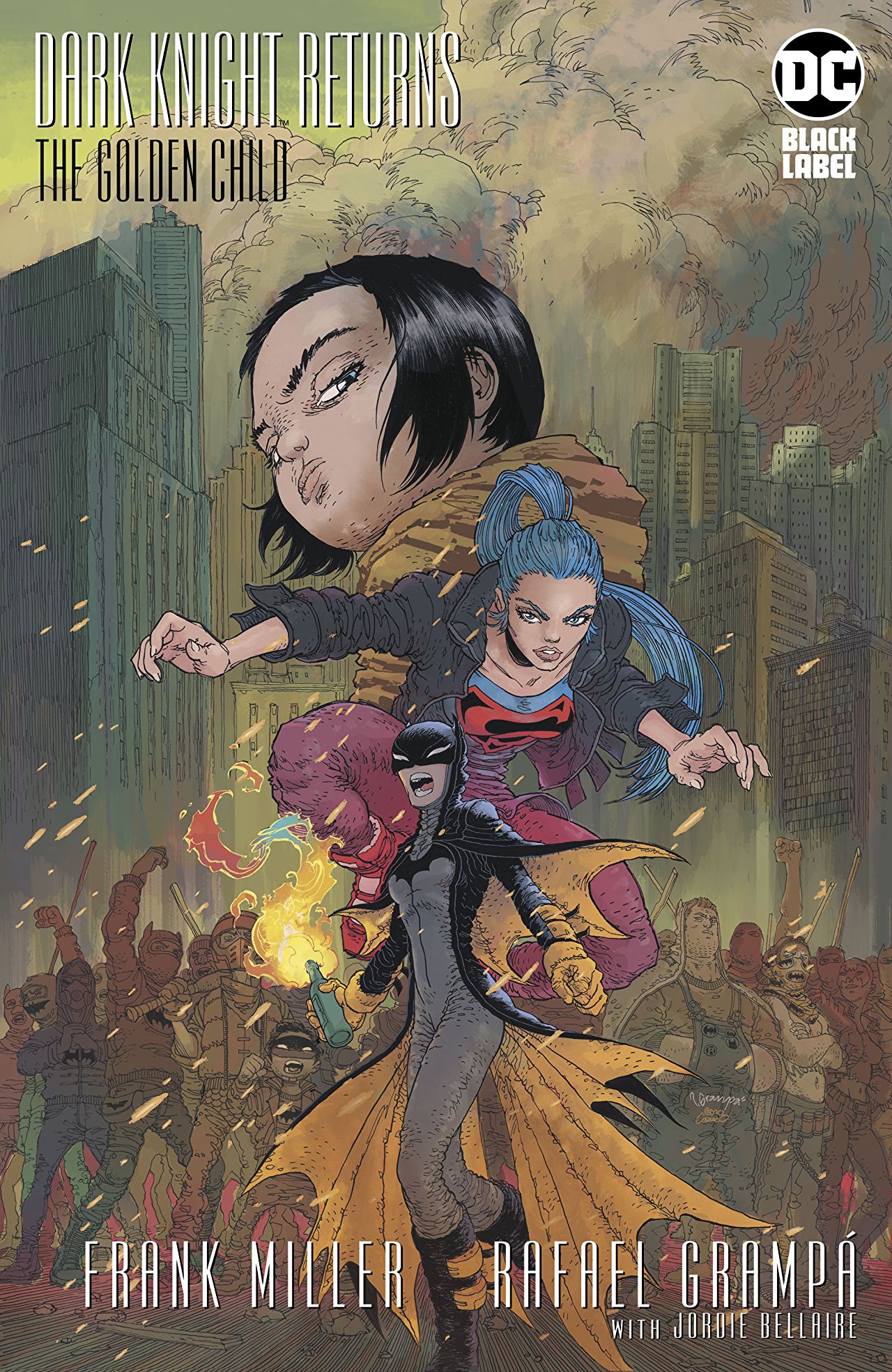 Overview: Carrie Kelley, the Batwoman, teams up with Jon Kent and his sister Lara against Darkseid and Joker in a violent, gleeful conflagration.

Synopsis (spoilers ahead): Jon Kent, son of Superman and Wonder Woman, listens to his sister Lara and father argue about their responsibilities. As he grows up, he marvels at humanity, floating above them with his family, and tries to show his more hostile sister the beauty of humanity. They see a mob fight break out below over an upcoming election, and their friend, Carrie Kelley, the Batwoman, fights back against the Joker-themed gang. Batwoman has her own gang and leads them in a brutal fight, routing the clowns.

In Carrie’s new Bat-fortress, she argues with Superman and Wonder Woman’s children (mostly Lara) and deduces that the Joker gang hides Darkseid’s plot.

Not far away, Darkseid himself coaches the Joker as they giggle over their plan to win the election by scaring opposing voters into staying home.

Batwoman and Lara interrogate one of the Joker gang, who directs them to Darkseid and Joker’s headquarters. The trio of Carrie, Lara, and Jon destroy the building, but Darkseid stops Batwoman and her human partners with his mind control. Lara and Jon together manage to temporarily destroy Darkseid by turning his Omega Effect on himself (in a very Galaxy Quest type fashion).

In the aftermath of Darkseid’s “death,” the clouds pour down drops of blood and Jon prophecizes that Darkseid will return for him.

As the god of Apokolips re-forms, Carrie hunts down the Joker. After a horrific car chase, she gleefully takes down the clown in Gotham Arcade, texting the boss when she’s done. However, as the Governor starts to fight back after his connection to the Joker stands unmasked, Darkseid returns with a blast of fire. He manages to overpower Lara, but tiny Jon stands in his way. He swallows Darkseid’s weakened Omega blast and releases a new power, neutron vision, which devastates the personified power of darkness. Jon reveals his control over his material being, taking himself and his sister out of Darkseid’s reach, leaving the monster vulnerable to Carrie and her Bat-gang’s attack, as they shake free from Darkseid’s mind control and charge towards him in victory.

Analysis: Frank Miller has had an exciting half-decade. Starting in 2015, he co-wrote and co-penciled the uneven but extremely enjoyable (and ridiculously best selling) Dark Knight III: Master Race (2015-2017), the lesser but still very fine one-shot Dark Knight Returns: The Last Crusade (2016), and the recently concluded Superman: Year One (which I would argue also contains the decades delayed ending to Miller’s most famous controversy, All-Star Batman and Robin). Now, DC’s grandmaster of writing Batman collaborates with Brazillian artist Rafael Grampa and colorist extraordinaire Jordie Bellaire to create the next chapter in his Dark Knight Returns universe (similar to Sean Murphy’s White Knight universe, though of course pre-existing that concept by three decades). What is the result? It’s…decidedly mixed, but also extremely powerful. Though not the frustrating eyesore The Dark Knight Strikes Again was, due to the glory of Grampa and Bellaire’s work, it leans too heavily into lazy political topicality (though not, as some fans and critics are claiming, in a surprising way) that clouds the potential power of the work.

To start with the biggest positive, Miller, Grampa, and Bellaire are clearly masters of their crafts, and meld extremely well. From the mysterious and beautifully energetic opening pages of Jon, Lara, and Clark, Jon evoking a Zen master while floating and peacefully observing his family, to the glorious effect of Jon’s new superpower, Neutron Vision, drawn by Grampa full of intricately whirling light and power, blindingly colored by Bellaire, the book provides a completely sumptuous treat for the eyes. I normally dislike the kinds of extremely dotted and curved shading techniques and linework that Grampa uses (similar to Paul Pope, Chris Burnham, or Frank Quitely), but somehow, Bellaire and Grampa together evoke beauty and power rather than creepiness and decay. Not to over-praise the art team instead of Miller’s writing, it’s clear that Miller exercises a great deal of influence and vision through his script, as the extraordinarily dense paneling, heavily pulp-inspired voiceover (though not quite as tonally confusing as in Superman: Year One) produce an experience clearly drawing from the same vision as the original Dark Knight Returns. Miller has said he’s obsessed with the idea of “closure” – the space between panels that requires the reader to interpret what’s going on – and loves to try to slow down his audience and make them think. This comic provides intense examples of that. Scenes like the Arcade battle drip with complexity, instead of the quick, slick modern comic art that would allow the reader to glide through the text easily, Miller instructs Grampa to make things hard, but never in a way that feels false.

Now, to address the elephant in the room – which is to say, the President in the room. Miller and Grampa thrust the image of Donald Trump in the reader’s face – though here as the Governor, instead of President, a puppet of Joker and Darkseid. As I mentioned previously, several readers have objected to this use of current political figures in such an emotionally charged and obnoxious way – but it’s completely unsurprising if you’ve been paying attention to what Frank Miller has been doing his entire career. The use of Ronald Reagan as a somewhat negative figure in Dark Knight Returns clearly signals Miller’s interest in using current political figures as symbols for the frustrations he has with modern society. While I am no fan of our current President, I also find the constant intensity with which many people hate him incredibly draining and poisonous to relationships and conversation, and I am annoyed with the way Miller and Grampa combine Trump’s image with the iconography of tyrant states. The shallowness of the approach is only highlighted by the controversy over one of the variant covers – Carrie Kelley, Batwoman, throwing a Molotov cocktail – which has apparently been banned in China because of its perceived connection to the Hong Kong protestors. While Miller and Grampa paint Trump and his supporters as gleefully destructive and bullying (definitely true of the former, and sadly true of at least some of the latter) who desire to run a police state, it’s a bit of a shame that he didn’t reach a bit deeper into current political conflicts and highlight an actual police state run by people willing to do things the current political party is certainly not doing. While such a geopolitical commentary clearly would have caused difficulty for DC’s multinational owners Warner Brothers and AT&T (given the controversy over the cover alone), it would have been bold in a way that attacking the US president is not – which gives the lie to the argument that Miller is living in a police state, as he’s able to make blatantly disparaging comments about his President, and has zero fear of reprisal, while people who use the image of Winnie-the-Pooh in China face serious consequences for just the CHANCE of criticism of their leader’s appearance.

Contrary to the current narrative (to be fair, based only on one day of reader commentary), Miller and Grampa don’t have a clear message. All their visual craft and wordsmithing is not devoted towards a coherent, carefully constructed political philosophy or worldbuilding structure, and if you attempt to make it into one, it will frustrate you intensely. Instead, they create a powerful impression of an attitude, perfectly summed up in the idea of an energetic group of young people fighting for something they don’t even understand – the hope of a better, more free future. What I, as a more politically conservative person who finds the kind of lazy vitriol hurled at Trump here obnoxious (even as I acknowledge that many of the President’s statements and supporters map fairly clearly onto that model), would like readers to take away is something similar to what more thoughtful commentators have said since the US election of 2016: Donald Trump is the symptom, not the cause, of our current tribal hatreds, violence, and despair. I think that seeing the Joker and Darkseid as his puppeteers can be read thoughtfully in this way, and I hope people will do so, rather than blindly hating the comic for mocking the President, or blindly cheering it for the same thing.

I want to close this review by highlighting my favorite thing about the comic – Carrie Kelley. In interviews, Miller has recently said (echoing reports of conversations he’s had at conventions) that Carrie Kelley has become the main character of his Dark Knight Returns universe – and though the narrative lacks a laser focus on her in this one-shot, it does show you just how appealing and fun she is. From her brilliant look as Batwoman, to the incredibly cool single scene we have of her with her cowl off at the beginning of the story, to the absolutely brilliant page of her sticking her tongue out while she rips the roof from Joker’s car, we see the infectious beauty of the kid with huge hair and goggle glasses aiming her slingshot at Superman thirty years ago – a wonderful evolution. I eagerly await the publication of Miller and artist Ben Caldwell’s Carrie Kelley graphic novel, likely delving into Carrie’s younger days, as the preview images posted highlight her Robin costume. It’s clear to me that Miller knows and loves Carrie, and hopefully will provide several more stories in her past, present, and future to come.