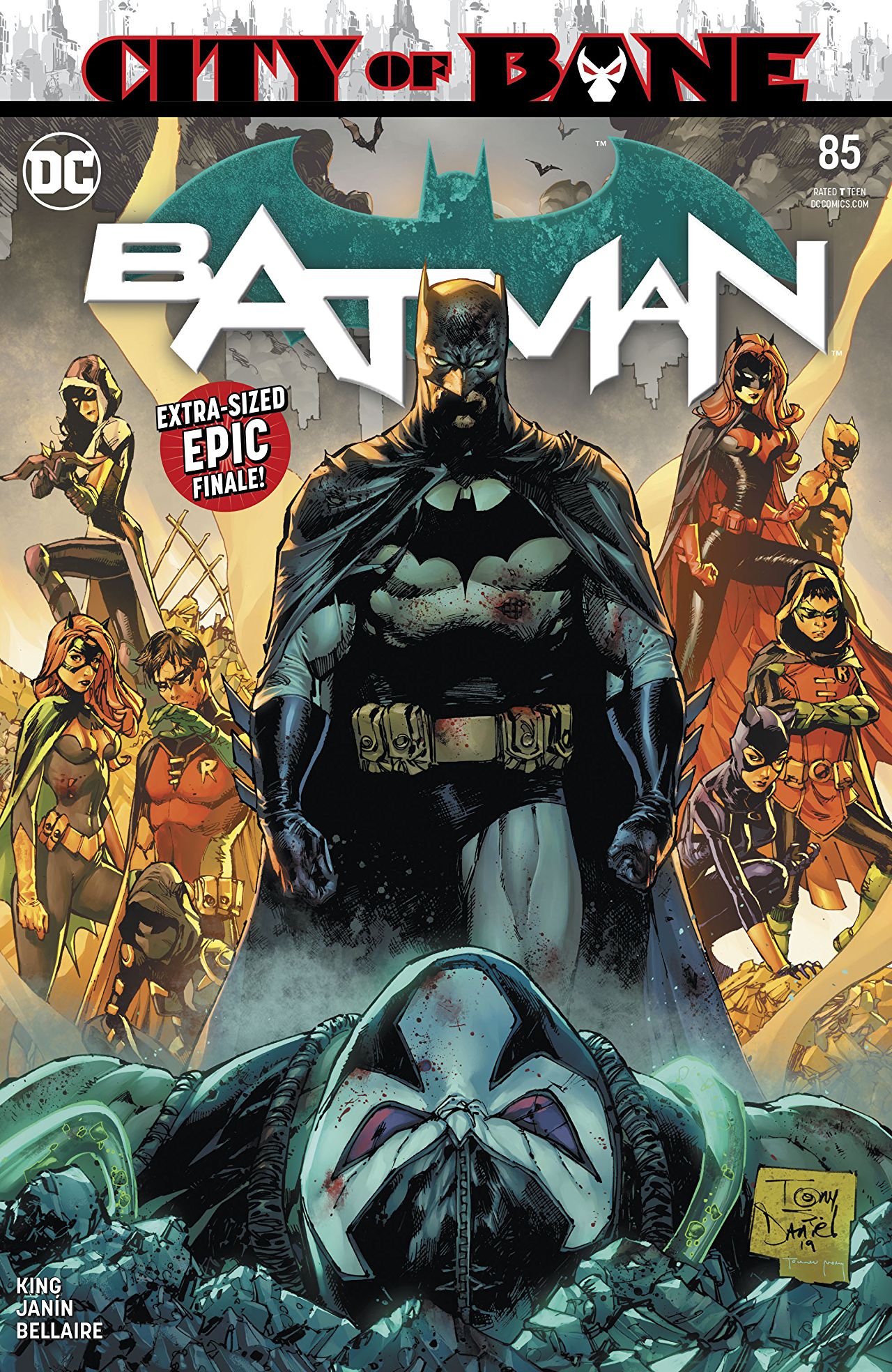 Overview: Batman and Thomas Wayne face off as both City of Bane and Tom King’s run on Batman comes to an end.

Synopsis (spoilers ahead): The issue picks up in the study at Wayne Manor, with Batman on the floor and Thomas Wayne telling him to stay down. Batman signals Catwoman and tells her to “break him”.

The issue then cuts to Bruce Wayne sitting at Porky’s bar next to Charles Brown, aka Kite Man, as they watch a football game.

Back at Wayne Manor, Catwoman’s whip wraps around Thomas’ neck as Catwoman drives her boot into the small of Thomas back, sending him to the floor.

The story then cuts to Batman and Gotham Girl climbing a cell tower. Batman talks to the recovered Gotham Girl about her plans as Gotham Girl continually brings up whether or not Bruce will marry Selina.

Back at Wayne Manor, as Thomas lies on the ground as Catwoman explains that they got control of Psycho-Pirate by promising to give Scarface back to the Ventriloquist. Thomas gets to his feet only to have Batman’s fist land on his jaw, as Batman tells him to stand down.

The story then cuts to Arkham where Batman visits Thomas, who is strapped into a straight jacket and wearing a protective mask. Batman speaks about how Thomas may be the only one who understands him and wondering if his father is proud of him.

At Wayne Manor, Batman stands over Thomas, who pulls a gun.

Bruce talks to Alfred’s grave as Selina walks towards him and takes his hand, as the two look up to see the Bat-Signal in the sky. Batman and Catwoman take out a bunch of villains and discuss whether they should get married, briefly discussing finding a drunken judge on his way out of a bar before taking a quiet moment to simply tell each other they love one another and kiss on a roof.

Back a Wayne Manor, Thomas holds a gun to Batman’s head, speaking about his sacrifices and reiterating that Bruce is not Batman.

Bruce and Selina lie in bed, as Bruce takes Selina’s hand and puts her engagement ring back on her finger. The two speak about how they exist outside of the law and how they don’t need a judge to know they are forever, with the sequence cutting to a double splash page of Batman and Catwoman swinging through a background montage of all the various iterations of Batman and Catwoman together.

The story then cuts to a young Thomas Wayne getting into bed with his wife and talks about worrying about Bruce. Martha tells him not to worry and says goodnight to him. The next page is Thomas, laying in his cell in Arkham, saying good night to Martha as Bane approaches, asking Thomas “is this all”. Bane then picks up Thomas and smashes him over his knee, breaking him.

At Wayne Manor, Thomas takes the gun away from Bruce’s head and asks him if he will listen to his father, letting Batman to his feet.

On top of the tower, Batman gives Gotham Girl a gift, Platinum Kryptonite, which will return her power to her. After hesitating, Gotham Girl accepts the gift and takes to the air. Batman and Gotham Girl then speak about how there are no good deaths, but good lives and they agree to both try to live one.

In the study, Batman tells Thomas that he has listened to him but that there is something Thomas needs to understand and then lays him out with one punch. As he stands over Thomas, Batman tells him that he is not his father.

As Bruce and Charles Brown sit at the bar, Charles speaks about one of the players being a perennial loser as Bruce speaks about the value of getting knocked down and getting back up. As the two watch the game, they are joined by Selina and the story ends with them watching that player finally get a play right.

In the epilogue, the Joker’s phone buzzes with the revelation that Superman is Clark Kent. One of his henchmen speaks about rumors that the Joker knows who Batman really is and how he has been saving it for something is, and after murdering that henchmen while talking about how something like that would be a punchline that has to be saved for the final battle, the Joker says how fun that sounds.

Analysis: In the animated film Batman Beyond: Return of the Joker, there is a moment where the Joker, having learned Batman’s identity, speaks about how underneath it all, Batman is just a “little boy in a playsuit, crying for mommy and daddy”. I think this is a notion that has gotten a lot of play by a lot of writers, the idea that Batman is this force of rage from a terrible childhood incident and that Bruce Wayne is the mask that he wears and this is the jumping-off point from which Tom King started his eighty-five issues of Batman. Looking back on the whole story, I think the whole point comes from a desire to have Batman grow passed the trauma of his childhood and become an adult. It’s fitting that the central villain of this story turn is a version of Bruce Wayne’s father. Batman’s gunpoint monologue about his life being a choice, not a vow, is I think the central point of where Batman has come to after this story, and I think it makes Batman a more interesting and fully realized character for future stories.

I think the big question for a lot of people in this story is what would become of Bruce and Selina and whether or not their story would end with the two of them getting hitched. I think there was something of a no-win scenario to this storyline. There are some people who think that Batman should absolutely never be married, others who would settle for nothing less than ending with the wedding that was promised in issue #50. I think that the solution that King has come up with is elegant and makes perfect sense for these characters.  After all, to paraphrase Frank Miller, they’ve always been criminals… or at least outlaws.   It makes sense that they would promise their lives to each other without feeling the need for a legal piece of paper that I don’t think that either character would really see value in, considering that as a vigilante and a sometimes cat-burglar/adventurer both exist outside the law. It will be interesting to see where the story goes from here in the Batman/Catwoman series later next year.

The big win of this conclusion, for me, is that there was no magic undo button. Thomas Wayne was every bit the villain that he appeared to be. I had some concerns that Alfred’s body would find its way into Ra’s al Ghul’s magic pit faster then you can say “cucumber sandwiches”. While some future story could bring Alfred back, for this story, he’s truly dead. As much as I will miss him, I think for this story, he kind of has to be. In a story about a man coming to terms with his childhood trauma to go from a child who is controlled by a vow to a man who every day makes a choice. And all men must eventually bury their fathers. I think removing Bruce’s perpetual father figure, is an interesting choice that makes sense for this story and I hope it is not easily undone.

The series takes the time to tie up the more prominent characters with a bow. Thomas Wayne is crippled or worse at Arkham, but could potentially return at some point. Bane seems to have survived his headshot and will surely pop up again. I do wish that Gotham Girl’s recovery wasn’t completely in off-panel land, but given that they only have a few pages, it probably makes sense to start where they did.

I do feel that having the story jump around in this final issue is unnecessary and robs the story of a lot of tension.   While I think we all knew Batman would pull out a win in the end, seeing Thomas Wayne defeated in Arkham before they show how he was defeated undercuts any tension to those scenes. That being said, I love how this story wraps up, with Bruce and Selina meeting for a quiet drink at a bar.   I’ve come to really like Tom King’s weird affinity for Kite Man and wrapping up the story with a few quiet nods to a character named “Charles Brown” and someone finally doing something right with a football seemed fitting, as is the return to Porky’s Bar from the magnificent Batman/Elmer Fudd crossover.

Mikel Janin does his usual stellar work. I enjoyed the parallels to the wedding issue in the rooftop scenes with Batman and Catwoman. The couple pages handled by Hugo Petros mesh fairly well with Janin’s art, which makes me wonder if Petros was working from Janin’s layouts or at least trying to approximate his character work.

The epilogue by James Tynion and Guillem March is fun but feels out of place in this story. I don’t think there is any reason to tie into the events of what is going on over in Superman. As for the concept of the Joker knowing who Bruce is and deciding to bring things to some sort of conclusion, that feels a little too similar to Scott Snyder’s Endgame but I’m certainly willing to give Tynion a chance given his fantastic work over in Detective.

Final Thoughts: I think that time will be very kind to this run on Batman, and that, much like King’s other work, reads better in a collected form then as individual issues. King presents Batman as a flawed, but ultimately very human character and I appreciate that he has put Bruce Wayne through a transformative character arc. I hope that other writers pick up this ball and run with it.