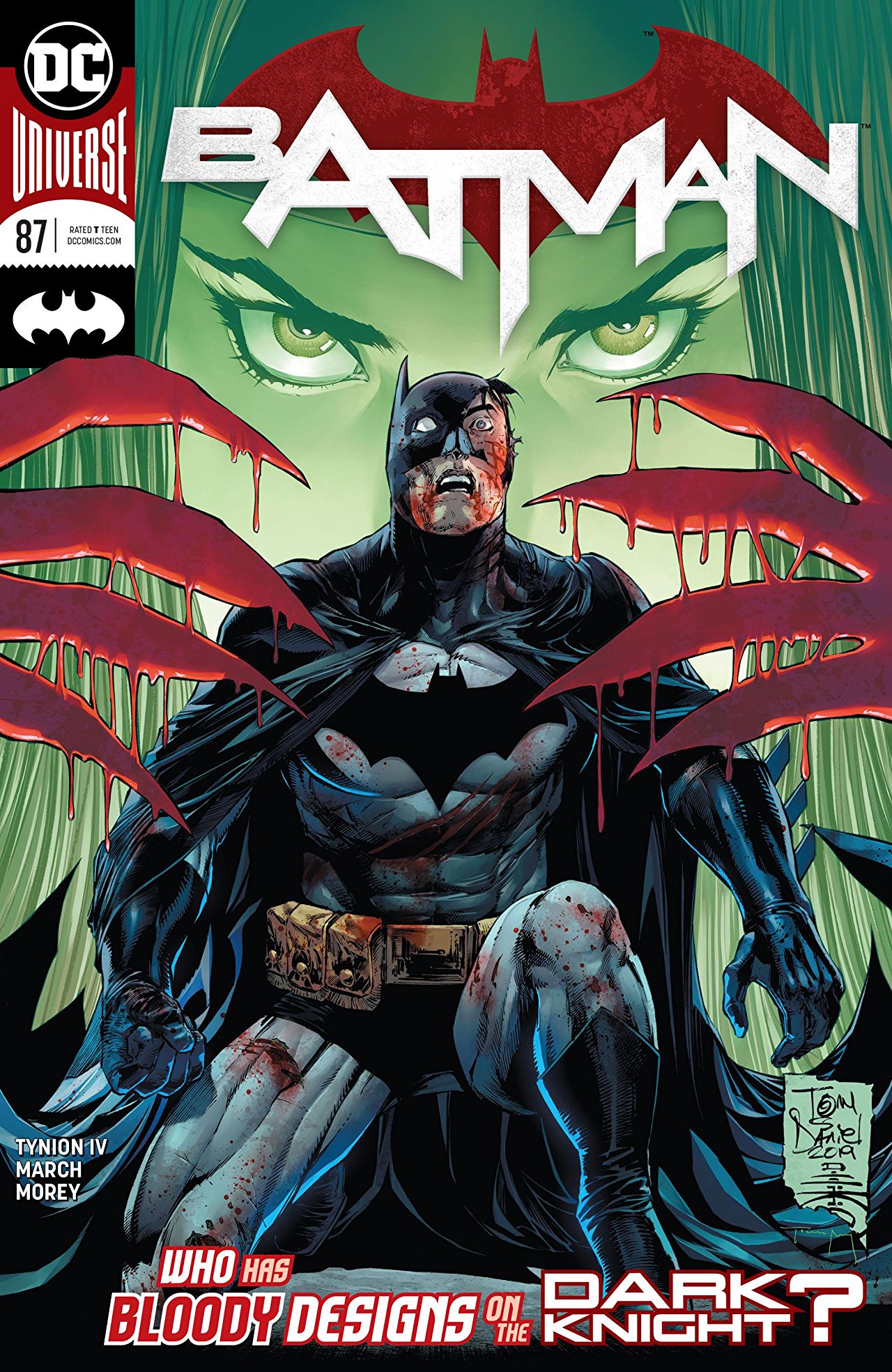 Overview: A scheme by a villain known as “The Designer” unfolds as Batman struggles to rise above the cat-and-mouse game designed to keep him preoccupied.

Synopsis (spoilers ahead): Somewhere in Gotham, the Riddler, naked and hopped up on amphetamines, hacks into Penguin’s private communication channel. Riddler hasn’t slept in three months. He’s been obsessed with solving an equation he believes is the key to Gotham. Penguin, on the other hand, is preoccupied with impaling unnamed criminals to death with an umbrella, and he doesn’t appreciate the intrusion.

Riddler apologizes for his intrusive rambling and gets to the point. The five assassins who were apprehended last issue were the first part of a greater plan. He reminds Penguin of a plan once concocted long ago, to which Penguin responds that he remembers this all too well and has already begun preparing for the storm. Oswald then advises Riddler to close up shop and disappear for a while. Riddler says he tried that already (in last year’s Year of the Villain: The Riddler #1). It didn’t work.

When asked what Penguin was going to do, Oswald replies, “I will not see my empire torn down by an outsider. I am doing the smart thing. I am cleaning house. I’ve just eliminated my inner circle.”

Riddler then reminds Penguin that they made a deal with someone called “The Designer,” and the Designer is coming to collect.

At One Police Plaza, Commissioner Harvey Bullock and the GCPD book the five assassins apprehended by Batman in the last issue.

Over at Tri-Corner Yards, Catwoman uploads blueprints to Batman. It seems that someone has a competing vision for what Gotham could be. Batman senses that Catwoman knows more than she’s letting on, but she won’t reveal her hand.

Below the new GCPD headquarters, which was funded by the Wayne Rebuild Committee, sits a new subterranean prison known as the Black Block. Cheshire, Gunsmith, Mr. Teeth, Deathstroke, and Merlyn are housed inside its escape-proof walls. Batman pays them a visit and questions Deathstroke about their employer. Deathstroke refuses to answer.

Batman then asks Commissioner Bullock to open Cheshire’s cell. Bullock refuses at first, citing how toxic and poisonous she is. Batman orders Bullock to do so anyway. Once the cell is open, Batman notices that Cheshire’s face is made of clay. She’s a body double, which means the real Cheshire is somewhere out in Gotham.

Batman boards the Batwing and asks Lucius Fox to prepare the Bat-Shot. Lucius tracks down Cheshire while Batman straps into a body-sized board with wheels. When the Batwing nears Cheshire’s location, Batman fires himself out along the side of a skyscraper in the Bat-Shot. As he closes in on Cheshire, she takes notice. The two fight. Cheshire has Batman pinned and believes she has the upper hand until Batman drives the Bat-Shot under a truck. Cheshire is defeated.

At the Black Block, Deathstroke is released from his cell. He takes down Commissioner Bullock and waits for the door into the Black Block to open. Over the intercom, Penguin informs Deathstroke that the Designer’s plans are being hijacked. Oswald is altering them.

Analysis: It’s been only one issue since James Tynion IV started his run on Batman, and we’ve already been thrown for a loop. Artist Guillem March takes over penciling duties from Tony Daniel, and a clean and crisp aesthetic suddenly switches to a gothic and grotesque vibe. Both March and Daniel are fantastic artists, but they have very different styles, which makes this switch so jarring. Were this between arcs, the change in art would be more digestible, but as of yet, we’re still dipping our feet into this first arc. We’ve only had one issue to get a sense for the feel of Tynion’s Batman, and consistency this early in the run, is crucial. As I mentioned, March is a fantastic artist, but tonally, it feels like we abruptly transitioned from a technological, cyberpunk fantasy to a straight horror mystery.

Gone are more human-sized characters and in their place are a vicious, bird-shaped Penguin and an emaciated Riddler suffering from a severe spinal problem. While I particularly enjoy the look of this deformed Riddler, it’s out of place in contrast to Daniel’s art last issue. It should be noted, however, that March’s designs will be the standard going forward, as he’s solicited as the artist for the next few issues.

In this issue, James Tynion continues to introduce us to new gear and new locations in Gotham City. The Black Block is noteworthy, especially since Batman teased that he designed it as a prison that could hold himself and members of the Bat-Family. I’m assuming this is a bit of foreshadowing on Batman’s part and that we’ll see the Bat-Family trapped here eventually.

We’re also introduced to the Bat-Shot, which serves as sort of a body-less car if the car design stopped at floorboards, wheels, and a powerful engine. It’s neat, but it also feels superfluous. I get Roger Moore Bond vibes when I look at it, though Tynion does his best to make it useful in its debut outing. Its inclusion this issue (as well as the inclusion last issue of the Nightclimber) leaves me to wonder if we’re going to get a bunch of one-off gadgets that serve one purpose and disappear from Batman lore.

Unfortunately, there’s nothing noteworthy as far as story progression. Whereas Batman #86 felt overloaded with story threads, this follow-up comes across as an in-between issue connecting one dot to something else we’ll see in two weeks. It’s a decent issue, but it’s preoccupied with setting up beats rather than connecting us to any sort of emotional resonance or tension. We do learn that our new enemy goes by “The Designer” though. We also learn that he’s been around for a while and has some connection with Batman’s classic rogues.

Final Thoughts: This second issue from James Tynion and Guillem March is decent, and we’ll see where this creative team aims to take us in the coming weeks.