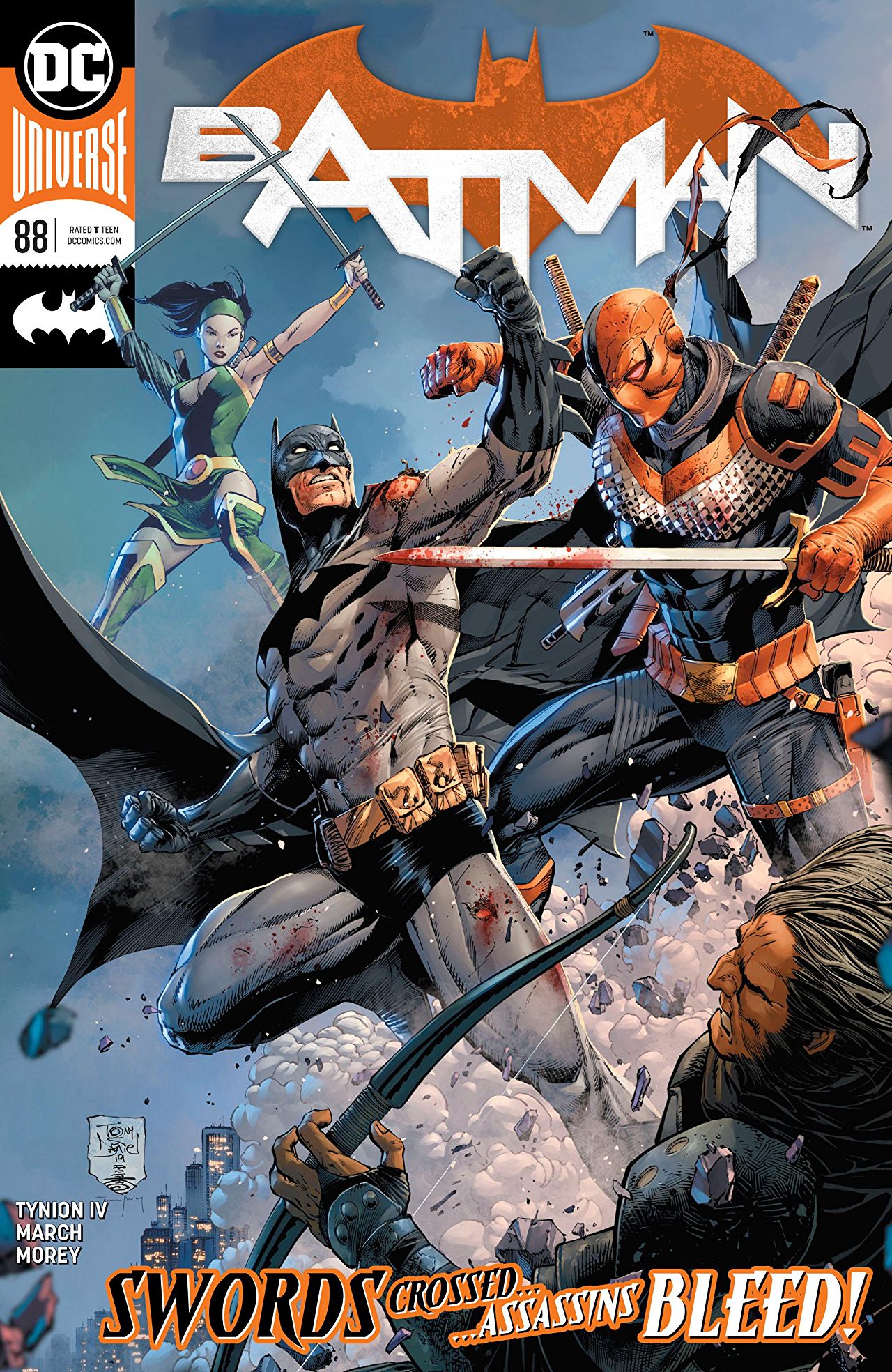 Overview: Batman races against time to catch the newly freed assassins, led by Deathstroke, while Catwoman tracks down a failsafe against the Designer.

Synopsis (spoilers ahead): At Potter’s Field, Catwoman calls Riddler on an old communication channel while she digs up a grave. After a few attempts, Riddler finally answers, noting that he hasn’t used that channel in a long time, not since Batman compromised it. Catwoman and Riddler argue about where Catwoman’s loyalties lie. After some back and forth, Catwoman finally asks Riddler if this grand scheme in motion really is the work of the Designer.

Before Riddler can answer, Catwoman says that this whole Designer business was supposed to be over, that it was supposed to be buried out in Potter’s Field. Catwoman threatens Riddler for an answer, and Riddler finally confesses that Penguin believes it’s truly the Designer’s plan for the perfect crime in motion. Riddler notes that he believes the Designer brought on a fourth conspirator and implicates the Joker.

“Riddle me this, Catwoman. Do you or your boyfriend know where The Joker is?” Just then, Catwoman unearths a coffin with what appears to be the corpse of The Joker inside.

Across town, Batman handcuffs Cheshire. Lucius Fox informs him over his communicator that Fox’s feed to the Black Block has been severed. Lucius then patches Batman to Commissioner Harvey Bullock.

Bullock tells Batman that the prisoners were “taken.” Once Batman learns of Deathstroke’s escape, he tells Lucius that he needs a car – quickly! Lucius directs Batman to one of his pockets on his utility belt, to a device called the Echo. The Echo hacks into components of any car with Wayne Enterprise technology and creates a holo interface that masks the car, thus making it function and appear like a makeshift Batmobile. Fox then directs Batman to a nearby Portia XL, which belongs to Lucius.

Back at Potter’s Field, the Riddler gloats over Selina’s misfortune at having hidden this secret pact between the Arkham rogues and the Designer from Batman. Then he cuts communication. Catwoman tries to contact Batman and confess everything, but she can’t get through. Before she can troubleshoot what’s wrong, the Designer’s goons descend upon Selina.

Meanwhile, at a former refrigeration unit once belonging to Mr. Freeze, Penguin has Mr. Teeth, Gunsmith, Merlyn, and Deathstroke suspended upside-down from the ceiling. He’s offering them double their pay in order to call off the Designer’s plan. Deathstroke escapes his restraints, but before he can make a move against Penguin, Batman crashes the party… literally.

Batman takes down Gunsmith, Mr. Teeth, and Merlyn. Deathstroke takes Penguin hostage. While Batman is preoccupied with Deathstroke, Merlyn seizes the moment to free Cheshire. Batman questions Deathstroke about this perfect crime, but Slade won’t have it. He slits Penguin’s throat and tells Batman that Penguin will die if Batman pursues the assassins.

The assassins flee while Batman tends to Penguin’s wound. Penguin then tells Batman that the four of them, Riddler, Joker, Catwoman, and himself, made a pact with the Designer. They called themselves the United Underworld, and this pact was a shell game to keep Batman occupied while the Designer went after Bruce Wayne.

At Potter’s Field, Catwoman is about to be buried by the Designer when Harley Quinn clobbers this new villain with her mallet.

Catwoman asks why she is there and Harley replies, “Oh, honey… You don’t even want to know how deep this goes.”

Analysis: This issue is gorgeous! Guillem March really knows how to balance between the grotesque (Mr. Teeth, The Joker’s would-be corpse, Penguin) and the beautiful (Catwoman, Deathstroke, that sleek new Batmobile). Readers get a full display of the grit and the rot, as well as the pristine and immaculate side of Gotham in this issue, and it works so well in tandem with this idea of the old and forgotten coming back to disrupt the new direction Gotham’s headed in. Often, artists convey a singular tone readers recognize them for, but especially in Batman #88, March’s range is on full display. He balances between dark and horrific and pulse-pounding and adventurous with ease.

His Batman design is also very cool. We get more of the modern look of Batman that we’ve seen in recent years with the stockier black-on-grey costume and black logo, but there are notes of Norm Breyfogle in the way Batman’s cape drapes from his shoulders and bat ears jut up from his mask. These little touches are wonderful, and they add an extra layer of character and style to this arc. This Batman feels like an amalgamation of the tones March is balancing between, as well as a protector who feels timeless.

The story itself is fun in a way we haven’t seen in a while. We get a new gadget in the Echo, and it’s the most useful new gadget yet. With the Echo, Batman can make virtually any car into a Batmobile, offering up, hopefully, a whole slew of new Batmobile designs in a way that makes sense within this world James Tynion IV and Guillem March are creating.

The pacing is quick in this issue, but it works. While there isn’t much new added to the plot, we do get some story momentum. Batman now knows about this United Underworld pact. We also see Catwoman grappling with her place among Gotham’s criminal element. She’s an outsider now, distrusted and viewed as a traitor. This could set up an interesting dynamic with Selina Kyle as she grapples with her love for Batman against a past that threatens to tear apart her relationship. Time will tell, however, where Tynion intends to take Catwoman.

One thing is certain, though. Riddler refers to Catwoman and Batman as boyfriend and girlfriend in this issue. It seems that the notion of them being “married” in their own weird, bewildering way is softly working its way out of Batman continuity. As a Bat/Cat fan, I found that disappointing, but their fate appears to be sealed.

That said, I was over the moon with the reference to the United Underworld. For those not in the know, United Underworld was the name of the criminal organization Penguin, Riddler, Catwoman, and Joker operated under in the 1966 Batman film. That’s a straight-up Adam West Batman reference, and I’m here for it.

Final Thoughts: This issue is a fast-paced, action-adventure romp that’s gorgeous, fun, and exciting to read. It breathes renewed life into Batman in a way we haven’t seen in awhile, echoing a Dennis O’Neil/Norm Breyfogle style in story and art that feels oddly refreshing.