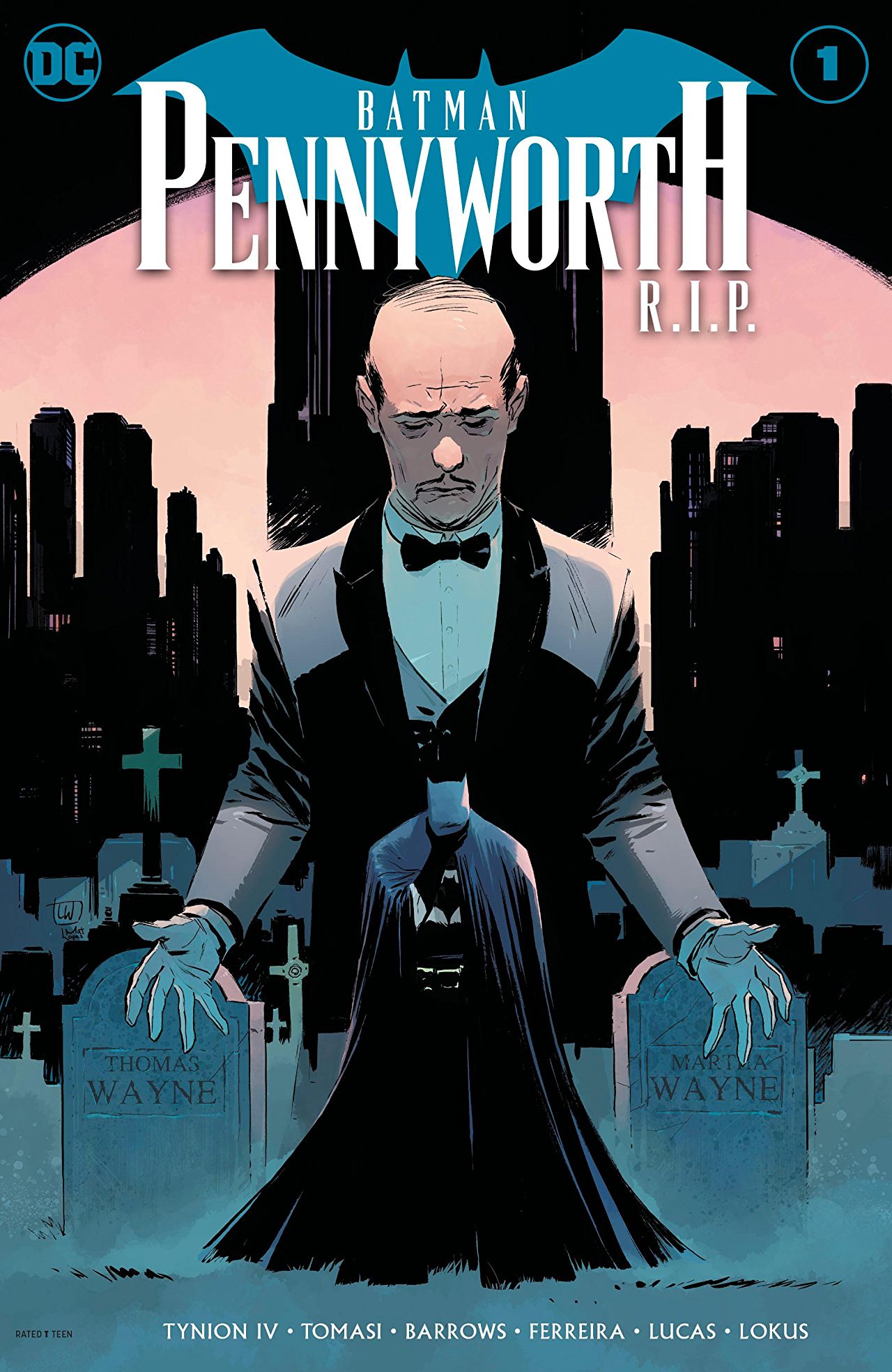 Overview: The Bat-Family meets to mourn the loss of Alfred, share stories of moments when he impacted them, and impart harsh truths about Batman’s isolation in the wake of Alfred’s death.

Synopsis (spoilers ahead): Damian Wayne, Jason Todd, Barbara Gordon, Ric Grayson, and Tim Drake all watch as Bruce Wayne gives a moving eulogy at the opening of the Alfred J. Pennyworth Children’s Hospital. After the ceremony, per Alfred’s wishes, they all meet at Noonan’s Sleazy Bar, a location tucked away in the Cauldron that Bruce Wayne bought out for the evening.

Gotham City isn’t without its defenders though. Catwoman, Batwoman, The Signal, and Orphan go out on patrol while the Bat-Family takes the night off.

At Noonan’s, Damian, Barbara, Ric, Jason, and Tim arrive ahead of Bruce. Ric gleefully agrees to tend bar, citing that he doesn’t have his memories back, but something tells him his relationship with Alfred was important. Jason calls out Ric for not even being a part of the family anymore after his brain injury, but then Barbara steps in, noting how both Nightwing and Red Hood were absent when Bane took over Gotham. Just as Jason begins to lean into Damian for being the cause of Alfred’s death, Bruce enters and stops the argument.

Shortly after, Damian demands to toast Alfred first. Raising a glass of ginger ale high, Damian recounts a tale of when he disobeyed an order from Batman, went out on patrol, and got caught by Alfred. In this tale, Alfred tries to convince Damian to empathize with his father and listen for a change.

After recounting this tale, Damian confesses the extreme guilt that lays heavy on his soul. He tells them that he can still hear Bane snapping Alfred’s neck. Overcome with guilt, Damian leaves the bar, asking not to be followed.

Once Damian has left, Barbara yells at Bruce to follow Damian and console him. She reminds Bruce that he owes greater responsibility to Damian than of anyone else in the bar.

Tim Drake butts in, raises his glass, and toasts Alfred. He then recounts a tale of how he lost some of his Robin gear in a fight with Firefly. Alfred snuck into the GCPD and got it back for him, wrapped in a present and all. After the story, Tim talks about how he joined the family back when Bruce was at an all-time low. Jason had just died, and Batman was broken. Tim then offers to return to the cave again to help heal Bruce, stating that all Bruce needs to do is ask. Bruce rejects the offer. Tim leaves shortly after.

Jason lifts his glass next and recounts a tale of when Alfred saved Red Hood from captivity. Prior to getting captured, Alfred had reminded Jason that no man is an island. After saving him, he once again said that one can always count on family. After finishing his tale, Jason charges Bruce with realizing that they’re all angry and that Bruce needs to be the one to fix the family. He then leaves.

Barbara sits down in front of Bruce and hits him with the hard truth. She says that the people of Gotham are terrified. The city they live in was ruled by Bane, and even though Bane is gone, the city hasn’t recovered. Furthermore, monsters like the Batman Who Laughs run around Gotham wearing the same Bat symbol for their misdeeds. She then tells Bruce that he let her father get infected by said monster, noting that Bruce decided to take a beach vacation with Selina at the worst possible time.

Barbara says that the family needs Batman again. Bruce says nothing, which pushes Barbara to smash her glass against the wall. She then recounts a time in which Alfred surprised her with a mountain climbing excursion for the anniversary of her leaving the spine rehab center.

Once Barbara leaves, Ric gives Bruce a glass of ginger ale. Ric tells Bruce everything he’s been learning about Alfred from this night, despite having no strong memories of his own. He notes that it seems like Alfred grounded people and brought them together, then asks Bruce to tell a story Dick Grayson would have told.

Years ago, Nightwing noticed Alfred was sad on the same day every year. He followed Alfred to Crime Alley, where Alfred placed flowers on the spot where the Waynes died. It wasn’t the anniversary of their death, and when Nightwing confronted Alfred about this mysterious date, Alfred cited that this day was their wedding anniversary. He left the anniversary of their death for Batman, preferring to celebrate their union and all of the philanthropy and gifts, like Batman, that they gave to the world. Alfred then confessed that he was taking leave the night they were murdered, heading on a vacation to Jamaica when he heard of their deaths over the television while packing his bags.

On the tenth anniversary of the Waynes’ death, Nightwing related this story to Batman. He said Alfred always wanted to tell him, “The death of your parents saved not only thousands of Gotham citizens over the years but for all intents and purposes the world itself, Master Bruce. If your mother and father knew what their sacrifice meant I wholeheartedly believe they would let everything happen exactly the same way again.”

After the tale, Ric confesses that he feels like Dick Grayson would have been the one to heal everyone and keep the rest of the family from leaving the bar. As Ric finally takes his leave, he pins a photo to the wall of the bar. Bruce gets up, grabs the photo, and looks at it. His eyes water. It’s a photo of all of them, of Batman, Nightwing, Red Robin, Batgirl, and Robin standing around Alfred, who is lounging in the Batcomputer chair.

Analysis: I don’t think this issue has the effect it wants to have, and arriving a couple of weeks after Detective Comics Annual #3 hinders what emotional impact this one-shot was aiming for in the moments when it’s actually sentimental.

Altogether, this one-shot comes across as more of a roadmap for Batman comics going forward in 2020 than a eulogy. Sure, we get a few touching moments regarding Alfred, in particular Dick Grayson’s story about Alfred celebrating the union of Martha and Thomas Wayne and what amazing things they gifted the world, but the tethers between these narratives, however, is a breakdown of the family unit. This is an odd choice.

I suspect the original intention of this special one-shot was to craft it in a way that shows how Alfred was very much the glue of the Bat-Family. That still remains true in this issue. However, the choice to have members of the Bat-Family fight and chide one another and wield their anger at Bruce, who sits silently and says nothing for almost the whole issue, has an adverse effect that detracts from what few emotional moments this one-shot goes for.

In turn, this issue becomes more about the dissolution of the Bat-Family than it is about celebrating Alfred. It becomes a vehicle to lay out how Batman comics will run with the theme of Bruce isolating himself rather than the family coming together to unite behind one of their most beloved members.

This issue also clearly defines who is in the Bat-Family and who is not. Stephanie Brown is strangely absent from this issue. Catwoman, Batwoman, Orphan, and the Signal are apparently not part of the family. This is odd when you consider that Bruce and Selina have confessed their undying love for one another. It’s also odd when you think about how Orphan and the Signal were brought into the fold. Sure, the Signal has been relegated to the sidelines in Batman comics for a while, but Orphan, alongside Batwoman, was an integral part of the Bat-Family in James Tynion IV’s run in Detective Comics.

It’s true that one could argue that Catwoman may have agreed to pick up the slack and go out on patrol, so Bruce could have this night off. Yet, there’s nothing said in the pages of this book to indicate that, so that argument is inferred at best. All you’d need to make a definitive answer is one simple throwaway line. Even better, devote a panel or two to Selina telling Bruce to attend and that she has Gotham covered. The right artist could craft this panel in a way that it carries the emotional resonance this one-shot seems to aim for.

Speaking of art, there isn’t really much to say about it here. Eddy Barrows, Eber Ferreira, Chris Burnham, Marcio Takara, Diogenes Neve, David Lafuente, and Sumit Kumar bring their own styles to the table in this issue. Particularly true of the stories recounted by the Bat-Family, the art choices celebrate unique artists and styles brought to Gotham in recent years, despite not really adding anything moving to the story or in the pages in which these styles appear. There’s seemingly no emotional resonance. For an issue about death, grief seems to be the only emotion left off the table. It isn’t until the end when Bruce grabs that photo of the Bat-Family, do we feel the slightest tinge of grief. By then, it’s too little, too late, making this last-page moment ring hollow.

Final Thoughts: This issue does more to set up the status quo of Batman comics in 2020 than it does to celebrate the life of Alfred Pennyworth. That’s not the worst thing in the world, but it certainly doesn’t deliver the touching one-shot we were expecting.