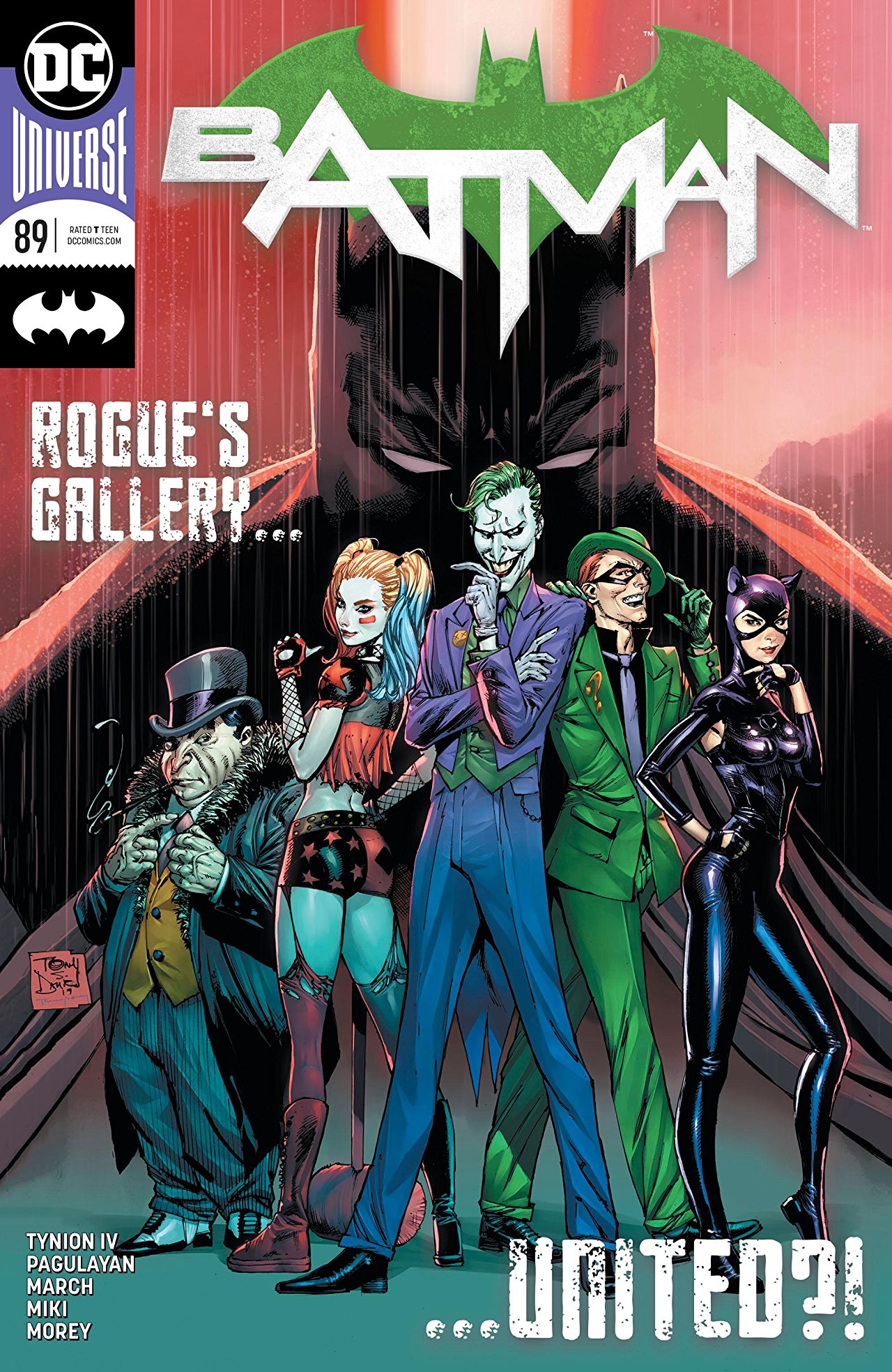 Overview: Batman tracks down Deathstroke and his assassins’ whereabouts, which leads to the first appearance of the villainous Designer.

Synopsis (spoilers ahead): At Gotham Mercy Hospital, two staff members discuss the massive Wayne funded reconstruction of Gotham City. As they’re lamenting the reshaping of Gotham without the input of Gotham’s citizenry, the Penguin stumbles into the hospital, bleeding from the neck. As Penguin falls to the floor, the medical staff scramble to prep him for surgery.

Elsewhere in Gotham, Batman grapples onto Gunsmith’s motorcycle and takes the assassin down. Once neutralized, Batman tells Lucius Fox that he’s, unfortunately, playing into the Designer’s plan. Bruce asks Lucius to find Selina since she was one of the original conspirators who knew of this plan. Batman then tells Lucius he’s going to track down the Riddler.

At Potter’s Field, Harley and Catwoman take down the Designer’s goons. During the fight, Harley reveals that the body in the coffin is Artie, a former henchman of the Joker. She also assures Catwoman that this isn’t the work of the Joker. It’s not his style, and he’s most likely hiding until his own machinations are finally ready to be unveiled. Prior to winding up at Potter’s Field, Harley had been following clues to the Joker’s whereabouts, which led her here. She has decided that she’s finally going to kill him at her next opportunity.

During Catwoman and Harley’s conversation, Merlyn and Cheshire show up to murder Selina. While the four fight it out, a mysterious onlooker watches from afar. It’s Punchline, the recently teased new henchwoman of the Joker.

At Riddler’s hideout, Batman takes down Mr. Teeth. Unfortunately, the Riddler isn’t around, which arouses Batman’s suspicions. After checking the security feed, Bruce sees Riddler conversing with a bizarrely dressed villain in a white mask with a red “D” on it. This must be the Designer. Batman notes that in the video feed, Riddler is making secretive hand signals. It’s a clue that alludes to the Sphinx when entered on an alphanumeric keypad. Batman answers the riddle and then connects Nygma’s computer network with the Batcomputer. Riddler has a tracer running on Deathstroke. Batman then tells Lucius to deploy the fleet of Batspawn, another new gadget to the series.

At TriCorner Yards, a swarm of bat drones fly to the skies and track down Deathstroke.

Back at Riddler’s compound, Selina and Harley show up with an incapacitated Merlyn and Cheshire. Harley tells Batman that Joker has a “whole Joker thing cooking.” Bruce then asks to talk to Selina in private, and she promises to tell Batman everything after apologizing.

In an epilogue, Punchline informs Joker over the phone that Catwoman and Harly found Artie’s grave but Batman’s attention is pointed elsewhere at the moment. “Oh. Well, that’s okay, my dear,” Joker says. “There are a few people I need to talk to first. Before the big game starts.”

Behind Joker are photos of the Bat-Family with all of their secret identities revealed. Jason Todd, Richard Grayson, Damian Wayne, Timothy Drake, and Barbara Gordon are all listed on the board.

Analysis: If you’ve been enjoying this run thus far, Batman #89 is another action-packed issue that stays consistent with the frenetic pacing of the last few issues. Something James Tynion does well in this issue is in giving readers origin stories of the newer assassins while Batman takes them down – a counterbalance to all of the action. This continues the slow drip of new information that keeps the action from getting stale, and it makes these scenes feel necessary or relevant, despite the fact that they could have been cut and the story would have been relatively unchanged.

Guillem March and Carlo Pagulayan’s art pairs well with James Tynion’s approach to Batman. March and Pagulayan capture a very moody, labyrinthine Gotham that feels endless and so rich with its own personality. Like the characters in this world, their Gotham is ever-evolving and growing, as if the city itself is very much alive. This not only gives readers a limitless place to get lost in, but it lends credence to the plot, wherein a forgotten villain and an old pact from years ago is unearthed to wreak havoc beneath Batman’s nose.

We do get our first glimpse of both Punchline and the Designer in this issue. The Designer’s costume is particularly noteworthy, as it incorporates a variety of clashing fashion decisions that give readers pause. It’s like a hybrid between a military uniform and something the Creeper might wear.

Other than a pair of fresh faces and some background information about some of the newly created assassins we’ve seen in the last few issues, there isn’t much new here. The plot continues to slowly unravel, and we get the sense that our protagonists are still finding their way to each other in order to form some kind of team-up against the Designer. Right now, it’s Batman, Harley, and Catwoman seemingly pitted against the Designer, Deathstroke, and possibly Riddler. Of course, this is assuming that Deathstroke is still running free.

We see Deathstroke on one page in this issue, right after the Batspawn deploys. We’re left to assume that this fleet of drones disposed of Slade, but it’s hard to tell. Frankly, this page was this issue’s weakest point, and it leaves one wondering why it was included at all.

Final Thoughts: If you’ve been following James Tynion and Guillem March’s run of Batman thus far, this issue continues the Jason Bourne-style action adventure. Newcomers, however, might be lost in a frenzy of interweaving narratives that mainly serve to ultimately bring characters together at specific locations.