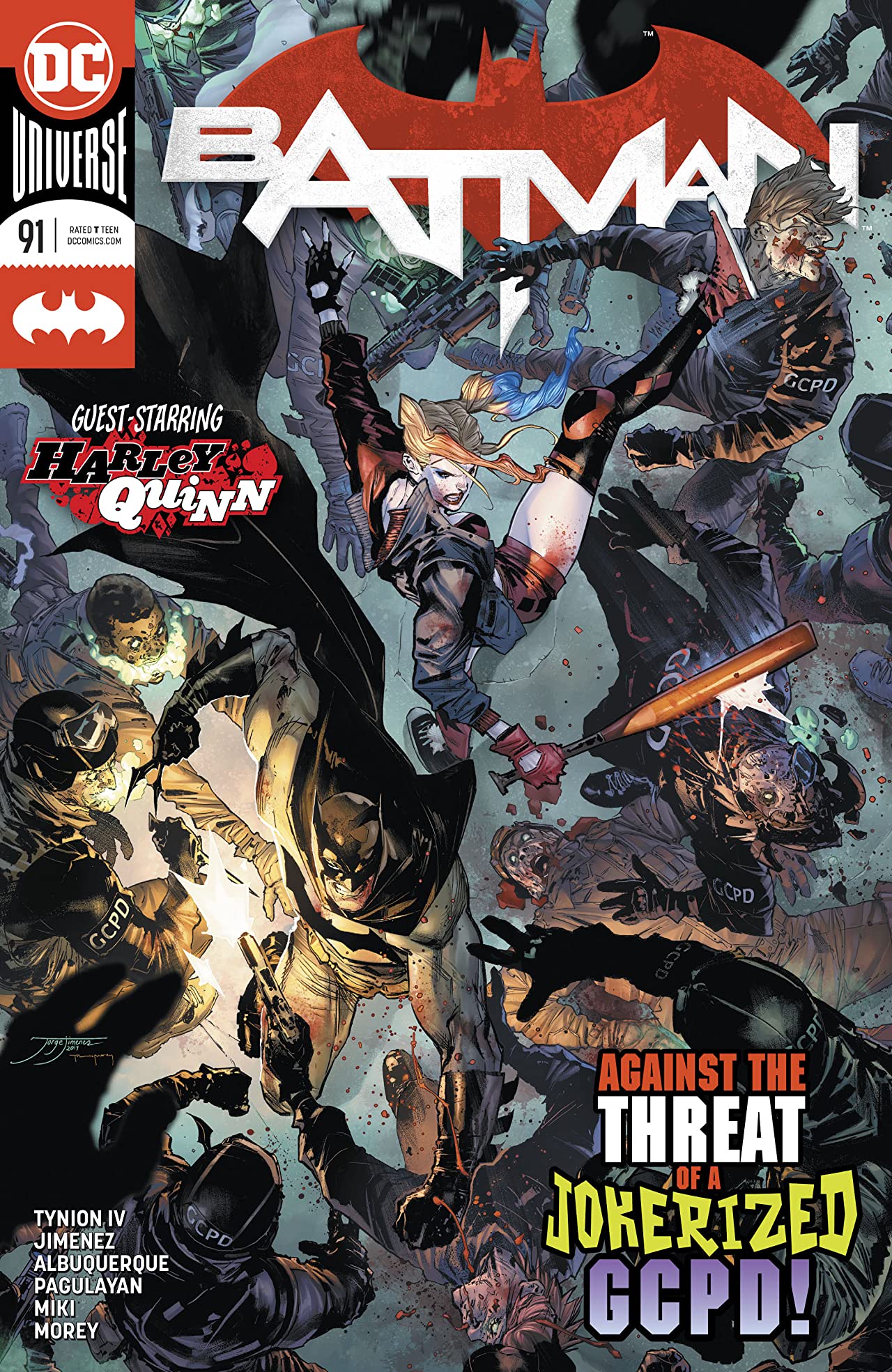 Overview: Catwoman and Harley race off to stop the Designer from putting his next plan in action while Batman duels Deathstroke.

Synopsis (spoilers ahead): At a rooftop bar in Gotham City, Joker tells his side of the story as to how Penguin, Riddler, Catwoman, and himself met the Designer. As he doodles on bar napkins, the Joker relays how each villain helped concoct a plan, which led to them receiving marching orders from the Designer to fulfill these plans. The true purpose, according to Joker, wasn’t to help foster these villains’ careers and tap into their true potential. It was to clear out criminal opposition and hand over Gotham City to the Designer.

“In time, it was the jester’s turn, and the devil asked him what he wanted more than anything in the world,” Joker says. “And the jester said to him… I want to be the devil. And then he killed him.”

After the recap ends, the bartender asks the Joker why he told him this story. The Joker says that he wants the bartender to know the context for this evening’s entertainment, so he’ll get the joke. Joker then gets up, asks for a phone, and calls Punchline to make sure everything is in place.

Across Gotham, Deathstroke fends off the Batspawn, Batman’s drone army. As Batman closes in on Deathstroke’s location via the Batwing, he orders Lucius Fox to call them off. The Batwing then descends upon Deathstroke, and Slade responds by jabbing his sword through its windshield.

At Riddler’s compound, Catwoman and Harley check on the captured assassins. Much to their dismay, the assassins are gone. Television screens light up around them, and the Designer informs the duo that he’s taken the assassins off the board. He tells Catwoman and Harley that the real games are about to begin, noting that Catwoman played her part perfectly in driving Batman insane. After the Designer finishes talking, a bunch of mind-controlled GCPD officers burst through the door.

Across Gotham, Batman and Deathstroke exchange blows atop the Batwing. During the fight, Batman argues about the escalation between himself and the criminals of Gotham City. He rages about how he constantly needs to construct bigger and more frightening weapons to keep criminals from harming the citizens of Gotham. Deathstroke retorts by arguing that Batman escalated first. Batman leaps into Deathstroke, and the two tumble down toward the pavement. Batman demands that Deathstroke tell him where the Designer is hiding, or they’ll both die.

At Riddler’s compound, Catwoman rigs the base to explode if one of the Designer’s mind-controlled goons steps on the wrong tiles on the floor. One does, and she then pulls Harley away from the fight. The two nearly escape from the exploding compound.

On the streets of Gotham, Harley and Catwoman dust themselves off. Catwoman tells Harley that she gave the Designer details on how to rob everyone blind, but she’s resolved to do it before he can.

Deathstroke tells Batman that he doesn’t know where the Designer is. Batman uses his bat grapple to prevent them from plummeting onto the asphalt. As the two assume fighting stances, a nearby video screen comes to life with the Designer’s face. As the Designer taunts Batman, Batman responds by demanding they square off face-to-face. Riddler then steps forward from behind the Designer.

“Now that wouldn’t be fair,” Riddler says. “I haven’t had my turn to play.”

Analysis: This latest issue from James Tynion IV, Jorge Jimenez, Carlo Pagulayan, and Rafael Albuquerque juggles so many multitudes that it’s amazing that Batman #91 works as well as it does. At any given moment, this creative team is bouncing from playful banter and humor to city-sweeping action and drama to an old-fashioned thriller where every character involved has their own angle to play. It’s a complicated web, and it’s one that’s very difficult to pull off. The team should be applauded for what they accomplish here.

One of the hardest elements to pull off in this story is in layering characters so that each one has their own, unique perspective of the truth and angle to pursue. Batman #91 starts off with the Joker recapping the events of Batman #90 from his own perspective. In this retelling, we learn that Joker views the Designer as a charlatan taking advantage of Gotham’s top tier criminals in order to wipe the rest of the criminal class off the board. From this perspective, Joker’s murder of the Designer makes sense. It also reaffirms the idea that Joker isn’t a villain who plays well with others or can easily share the spotlight. Furthermore, it makes the ending of Batman #90 even more curious. Catwoman mentioned that after the murder of the Designer, Joker seemed different — changed somehow. This begs the question, “Why?” Did Joker become more twisted and serious because he realized that the rogues were being used, or is there something more there? Either way, this opening was the first “Joker War” tease that actually sold me on this upcoming arc. It goes beyond the Joker War advertising we’ve seen to date, suggesting that there’s more than just a “bigger” scheme at work.

Aside from Joker, Deathstroke clearly has his own angle to play. We know from previous issues that there’s something more important than money driving Slade Wilson. During his fight with Batman, he pushes back on the idea that Batman only escalated because the criminal class upgraded their weaponry first. Slade counters that Batman’s at fault for the state of fear endemic in Gotham City. He argues that Batman escalated first, and when asked to stop fighting and let Batman save Gotham, Deathstroke retorts with a simple, yet defiant, “No.” It’s unclear still what Deathstroke’s angle is, but this brazen defiance makes one wonder what Slade’s offer was.

Catwoman continues to shine in this issue. Last issue, we learned her story on what happened with the Designer, and we saw her in more of a vulnerable place with Batman. This issue, she’s resolved to correct her mistake. In this way, Catwoman exudes the fierceness and determination we’ve come to know her for, and pairing her with a very quippy, light-hearted Harley Quinn is the perfect comedic chemistry to balance out a very intense thriller.

The dynamic between this comedic pairing is furthered by the art. Catwoman is drawn very tight, angled, and pensive. Her poses are standoffish. Harley, on the other hand, has a very soft glow about her. She has more rounded features, and her jacket is frequently shown hanging off one shoulder almost like an 80s halter top. This furthers that sense of off-kilter, at-ease humor we’ve come to expect from Harley.

We get a lot of narration from Batman in this issue, which we haven’t seen much of in a while. At first read, it’s almost off-putting, and it makes Batman more talkative than readers have been familiar with lately (particularly when compared with Tom King’s run). It also adds vulnerability and a sense of imbalance to the issue. There’s an uncertainty in Batman’s voice, and this uncertainty feeds into the unpredictability Tynion and team are building with each one of these characters having their own angles and motivations.

Ultimately, this is where all of these moving parts coalesce. It’s this well-orchestrated symphony that keeps us anticipating what’s going to happen next issue. As I mentioned before, this is hard to pull off, and it’s part of why I found this issue so exciting.

I’m not going to rate the artists and say whose I prefer, either. The true cause of this problem is something we at The Batman Universe have mentioned time again. It’s the double-shipping every month. If DC were to change this policy, these inconsistencies wouldn’t crop up. Blame the publisher, not the artist.

Final Thoughts: Oh what a magnificent web this creative team is weaving! Batman #91 delivers a multi-layered storyline in a way that very few manage to pull off. Bravo!