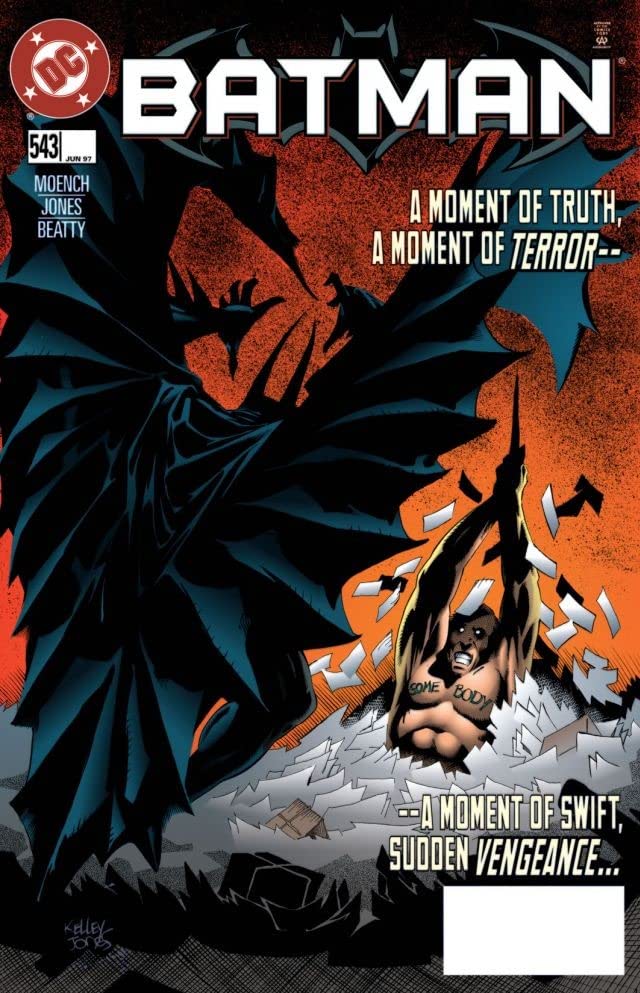 Editor’s Note: With new comics still waiting for a normal release schedule, the staff has decided to look back at a number of older issues to check out some other stories. The format of the reviews is the same, but we will be sure to tell you when the issue was originally released and where you can find it.

Flashback Notes: This issue was originally released in April 1997. This story takes place shortly after the events in Knightfall and Prodigal. Bruce Wayne has retaken the mantle of the Bat from Dick Grayson. You can find this issue on Comixology for purchase, part of the DC Universe subscription offerings, or in back issue bins at local comic shops or online.

Overview: The finale of the two-part Faceless arc shows the Dark Knight confronting his newest rogue.

Synopsis (spoilers ahead): In the Batcave, Batman and Robin (Tim Drake) deliberate over the motive of Faceless’ murders, methodically profiling the details leading Batman to deduce that the murderer is not a familiar rogue and that geography is the only link each victim shares. While this does little to narrow down a likely suspect, it’s still something to go on. After thanking Tim for his help, Batman leaves the Boy Wonder, disappointed that he doesn’t get to help Bruce out in the field, close to the computer for assistance.

While the Dark Knight prowls West Gotham working on little else but luck, Faceless taunts the florist as seen in the previous issue. Although dressed up as the florist himself, Zedno admits that he is the mailman as he stalks the florist who, through desperation, reaches for a vase and throws it at Zedno. Faceless dodges it, and the vase breaks through the glass wall of the shop. The florist screams.

Batman is luckily within distance to hear the cry and immediately takes pursuit.

Zedno, still in the florist’s guise, meanders off from the crime scene lamenting that, despite having acquired an assortment of faces, he himself still seems to be a nobody.

Batman descends upon the florist shop too late. He finds the newest victim shrouded by roses and another message scrawled above in blood: ‘Stop These Special Deatheries’. A short investigation tells Batman that the man was murdered mere minutes beforehand, and the killer would still be quite near. He catches sight of Faceless, who is walking unaware of the presence behind him, and takes chase. But Zedno discards of the face and disappears into a crowd of people just now leaving the Gotham Arts Theater.

Back at the cave, Bruce and Tim are at an impasse on how to progress. With no other clue, and the night still young, it’s only a matter of time before Faceless claims his next victim. Alfred enters with roses addressed to Bruce from Vesper Fairchild. This reminds Bruce that he’s got a date tonight but worse, that Vesper lives in West Gotham. With no other clues besides geography to work from, this puts Vesper in as much danger of being the next victim as anyone else in that neighborhood. He calls to cancel his date with her, and after informing each other of the florist’s attack, he asks her to lock her doors and to be safe.

After Bruce hangs up, Alfred tells him that the roses had been sent ‘Special Delivery’, igniting an epiphany for Bruce who remembers the last message, ‘Special Deatheries’. He catches on that the geography can now be more localized.

Alfred exits toward the manor, commenting on the seriousness of the flowers; the meaning of them being how serious the relationship between Bruce and Vesper is becoming and the counterweight of the Batman’s obsession with his mission.

Consulting a map Robin had made, Batman’s theory that Faceless is a mailman falls into place. Instructing Tim to find the identity and address of the letter carrier, Batman takes off once again into West Gotham.

Joseph Zedno is at home in front of his mirror, demanding of himself  the question, “Who is the next victim?” While he prepares his body for his next victim, Robin informs Batman that the letter carrier of the route in question is Joseph Zedno and that Zedno had just been given his two-week termination notice. Batman speeds towards the address.

Batman crashes into Zedno’s apartment, astonished at the mounds of mail encompassing everything. Zedno, still lifting weights, is nonplussed at the vigilante who has just crashed in on him. He tosses his barbell onto Batman, who is able to catch it with ease, but buckles when Zedno lunges and adds his own strength. Zedno both demands and pleads Batman to catch him before he finishes his route. Batman tells him just to turn himself in, but Faceless refuses, saying he needs to be CAUGHT. Faceless nearly gets the best of the Bat until he is distracted by another voice, Robin, yelling his name and giving Batman the chance he needs to fight back and dispatch the murderous mailman. The issue ends with Joseph Zedno buried deep within a mountain of mail, faceless once more.

Analysis: I really enjoyed the detective work at the beginning of the issue, with Bruce and Tim sparring likely motives and profiling the yet-unknown murderer. Moench spent quite a bit of time having Batman and Robin discussing and narrowing down the possible leads, which I, unfortunately, find lacking in the stories of more recent years.

This compensates for the lack of development Zedno receives in this issue. His characterization is pretty much unchanged here. Already having lost his direction in part one, Faceless is now a fully-realized Arkham candidate. There is no redemption and no remorse for the murdering mailman. He understands that his career and his normal life is over and embraces his new persona. On the closing pages of the issue, he urges Batman to stop him. But this doesn’t seem to be out of a desire to save his victims or even to save Zedno’s own sanity. He wants Batman to stop him because there are only a limited number of people on his route, and once he steals the face of that last victim, then does Zedno become but the ultimate nobody once more? Faceless needs his victims to survive just as much as he needs to kill them.

This attitude reflects on a larger scale his own never-ending need to impr0ve his image in a world where being recognized is futile. In quite a few scenes he is depicted as always lifting weights. His musculature is impressive, and yet no one ever notices him. Indicative of his job, nobody acknowledges all of the genuine hard work he puts into himself. They only notice his flaws.

The cover for this issue reads ‘A Moment of Truth, A Moment of Terror–A Moment of Swift, Sudden Vengeance’. It depicts Joseph Zedno, Faceless, encapsulated within a mound of mail, knife in hand awaiting to plunge it into the Batman, who descends upon him. Perhaps this moment of truth is realized when, after the murder of the florist, Zedno realizes that killing and stealing the faces of his victims isn’t doing anything in regards to helping him feel like somebody. The victims in the first issue were personal, having had a meaningful interaction with Zedno as their mailman and giving him the fodder his darkness needed in order to fester and open. The florist, at least as far as the information we are given says, is the last of the truly personal offenses Joseph encounters. He then gives himself over completely, losing the ability to control the addiction the murders have become. Perhaps his moment of terror is born when he understands that the attention, that laser-focused and all-bright attention he is receiving from these victims, ends when he kills every last customer on his route. He understands that his victim pool is finite, based solely on the only people whom he sees on a regular basis. In turn, he prods the Gotham City Police Department and the Batman to stop him not for their sakes, but for his own, so he could later continue on, thereby extending his life and livelihood.

Final Thoughts: I remember enjoying this story far better when I was younger. The idea of walking around as an involuntary invisible man and the wretchedness that existence could entail was troubling to me. That still resonates with me today and that still bounces around in my head at times when I am put into similar situations. I only wish that this story had been given more issues. I think more could have been said about Joseph Zedno’s psyche, and I believe that at the time this arc was, unfortunately, a little bit of a throwaway.  Kelley Jones’ art was ideal for this storyline, drawing out the grotesqueness and vast futility of Faceless’ desperation. His portrayal of Robin was thankfully far better in this issue, as well. He looked the part of the Boy Wonder.