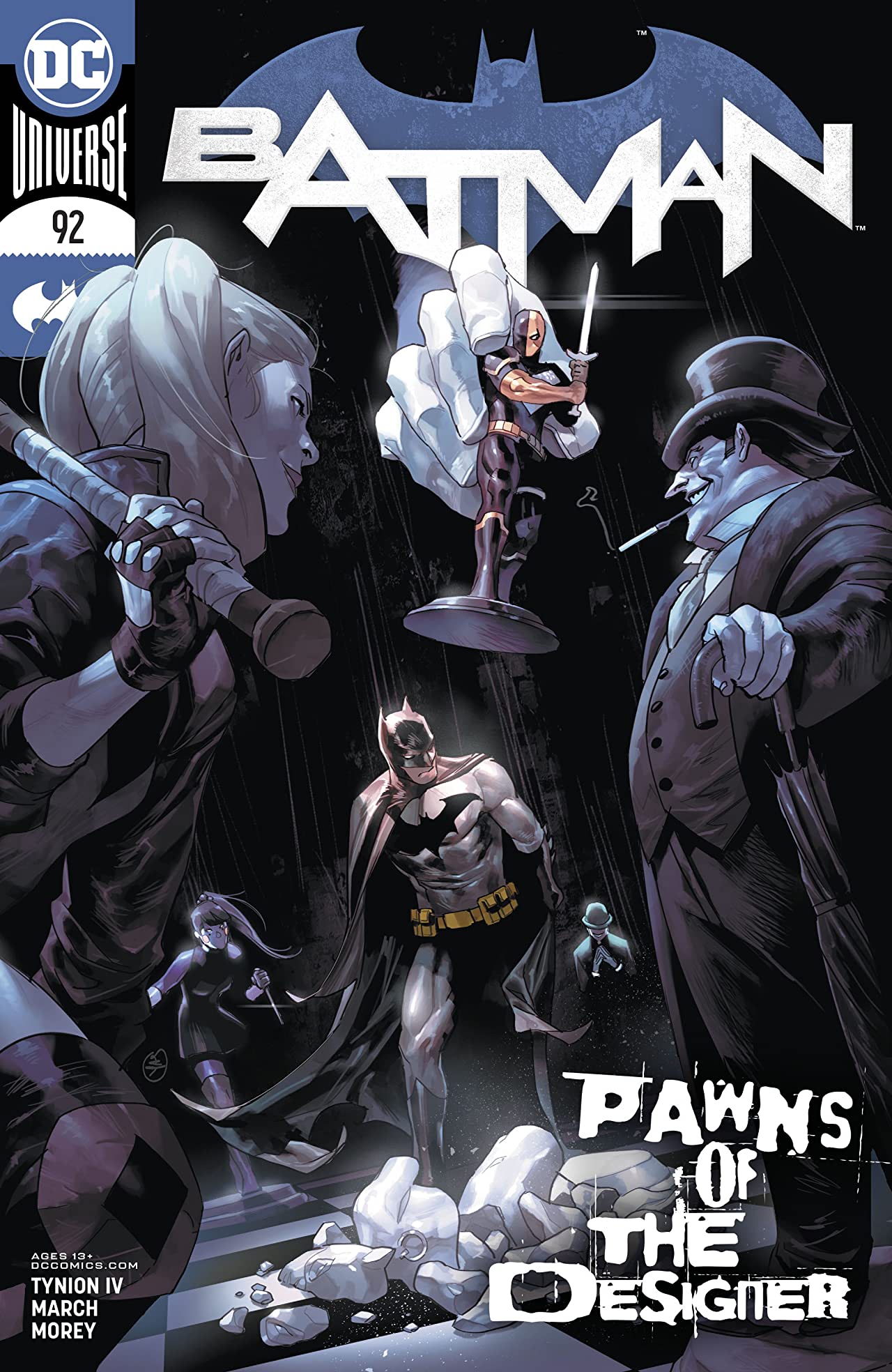 Overview: Batman and Deathstroke track down the location of the Designer while Catwoman and Harley Quinn head off to the Underbroker’s in order to pull off the greatest bank heist of all time.

Synopsis (spoilers ahead): At Gotham Hospital, acting Commissioner Harvey Bullock tells a bed-ridden Oswald Cobblepot that he’s going to charge Cobblepot for the murder of three police officers. Cobblepot says he was kidnapped and his own men were murdered, denying the charge. He counters by saying he’d like to press charges against Deathstroke.

Knowing that he has no proof that Penguin murdered those men, Bullock threatens to find something he can charge Cobblepot with. Before he finishes his thought, a GCPD officer alerts Bullock to something going on outside. Gotham City is lit up in green.

Every screen across Gotham has been hijacked by the Riddler, who is broadcasting his latest game for Batman to play. It’s a massive crossword puzzle, and Gotham City is the board. Major roads and streets across Gotham have been blocked until Batman can answer the appropriate crossword question correctly. If he answers wrong, Riddler detonates a bomb.

Batman, who is bruised and beaten from his bout with Deathstroke last issue, signals Lucius Fox to trace Riddler’s location. Riddler responds by cutting off all communication channels, leaving Batman to fend for himself.

Beneath Gotham City, Harley Quinn and Catwoman make their way through the sewers. As they near the secret entrance Catwoman is looking for, they’re descended upon by more of the Designer’s zombified GCPD officers.

Above ground, Batman and Deathstroke team up to battle more of the Designer’s zombified police force. They head down into the subway system, against Riddler’s protests. Batman answers Riddler’s crossword puzzle questions while they wait for a train to arrive. A Bat-train arrives, and Deathstroke and Batman board it to head off to parts unknown.

Riddler curses Batman, but Batman tells him that this wasn’t prohibited in the rules. He can still play Nygma’s game.

Outside the secret entrance in Gotham City’s sewer system, Catwoman tells a hologram of the Underbroker to let her into his facility amidst an onslaught of Designer goons. She reminds the Underbroker that she’s a member in good standing and that Harley is a guest of hers who should be welcome as well. The Underbroker lets them in. However, he informs them that there may be a conflict of interest.

Inside, the facility has been overtaken by Joker’s goons. A figure emerges from behind the henchman, and this is our first true introduction to Punchline, Joker’s newest “partner.”

It turns out that Punchline is here to rob the same bank that Catwoman and Harley are after. Harley and Punchline banter before a fight breaks out. In the maelstrom, the Underbroker flees. Catwoman pursues him. Catching him with her whip, she leans in close to the Underbroker and threatens him until he agrees to do as she asks.

Back over the airways, Riddler is screaming that Batman is cheating somehow. Batman appears behind him, and when Riddler asks how Batman knew where he was broadcasting from, Bruce only says that he recognizes the room. Batman then puts both Riddler and Deathstroke to sleep, before turning his attention to the other person in Wayne Manor.

“Hello, Bruce,” the Designer says, seated comfortably in a chair. “Please come in. We should talk a little while before I kill you.”

Analysis: We haven’t had an issue of the flagship Batman title since March 18, so it’s refreshing to come back and feel as though nothing happened to disrupt this series within the past few months — no pandemic, no shutdown, and no interruption of comics.

Batman #92 picks up exactly where Batman #91 left off. Riddler makes good on his threat to have a go at Batman, and Catwoman and Harley reach the Underbroker’s hideout, so they can rob everyone blind. We also, finally, get that Harley Quinn / Punchline face-off we’ve been teased from comic scribe James Tynion IV for months now.

The energy in this comic is frenetic, pulse-pounding, and relentless. Guillem March’s paneling is like a perfectly paced action movie. He knows exactly where to intercut small panels that give us close-ups of important information, whether they be character reaction shots or small, hidden actions, against backdrops of these exciting moments. My favorite example of this is when the Bat-train arrives. We get this small, four-panel grid of Riddler asking his crossword puzzle questions while Batman answers them, each time punching a zombified Designer goon along with delivering the correct answer. This is all to the backdrop of the Bat-train rushing in like a black-and-red bullet. It’s one of the many moments in this issue where we, as readers, may gasp in surprise. The way this moment plays out, we can hear the rumble of the tracks and the sound of the train whirring by, and we can feel the gush of subterranean air gushing towards our faces. It’s beautiful, and it’s but one of many moments that contribute to this relentless pacing.

In turn, Tomeu Morey’s coloring meshes well with March’s penciling. Throughout most of this issue, Morey highlights the greens, yellows, and oranges of Gotham City, which brings out this sickly, decaying feeling in March’s work. It’s unsettling, and it adds to the sense of urgency we feel. In contrast, Morey also highlights softer notes of purple, pink, and red when Catwoman and Harley encounter Punchline and the Underbroker. There’s an immaculateness to this moment as if this is the only part of Gotham untouched by decay. Even Joker’s goons, in this light, seem uncharacteristically clean.

In past reviews, I’ve been down about March’s Riddler design. Nygma has looked too sickly for my taste, but in this issue, I love what March has done to him. Riddler’s wearing more of a classic spandex getup, something reminiscent of his original appearance. Question marks line his green outfit in a grid-like formation that I wonder is in reference to the whole crossword puzzle plot. Since Riddler’s original incarnation had dark brown hair, I also wonder if this classic suit paired with the bright red hair is a nod to Jim Carrey’s turn as the character. That said, Riddler still retains some of the sickliness in his face. His face is skeletal and full of stubble, so we know that Riddler is as unhinged as he has been in past issues. It’s a nice balance, and I’m thankful that his crooked spine is gone from this look.

With regard to the story, I’m glad we finally get to meet Punchline. She has phenomenal banter with Harley about being in a relationship with Joker. It’s one of the highlights of this issue, and after such a long wait between Batman issues, it’s nice to come back to something fun and exciting. Batman’s banter with Deathstroke is equally amusing, and it’s great to see this counterweight of character pairings having their own, unique repartees with each other throughout each plot. It really keeps the momentum moving forward as the creative team juggles multiple subplots.

Beyond that, it feels like the pieces are finally in place for Tynion to tell the story he’s been leading us toward. Batman finally encounters the Designer face-to-face. Punchline and Harley have exchanged fisticuffs. Catwoman is so close to pulling off her heist. We’re at that crossroad where hopefully we can learn who the Designer is and why he’s so obsessed with Batman. Is he the same guy Joker killed years ago? Is he someone new(ish) with an ax to grind?

Final Thoughts: If you’ve been enjoying James Tynion’s run on Batman thus far, this is a refreshing return to the hyperactive fun he’s been consistently delivering since taking on the title.