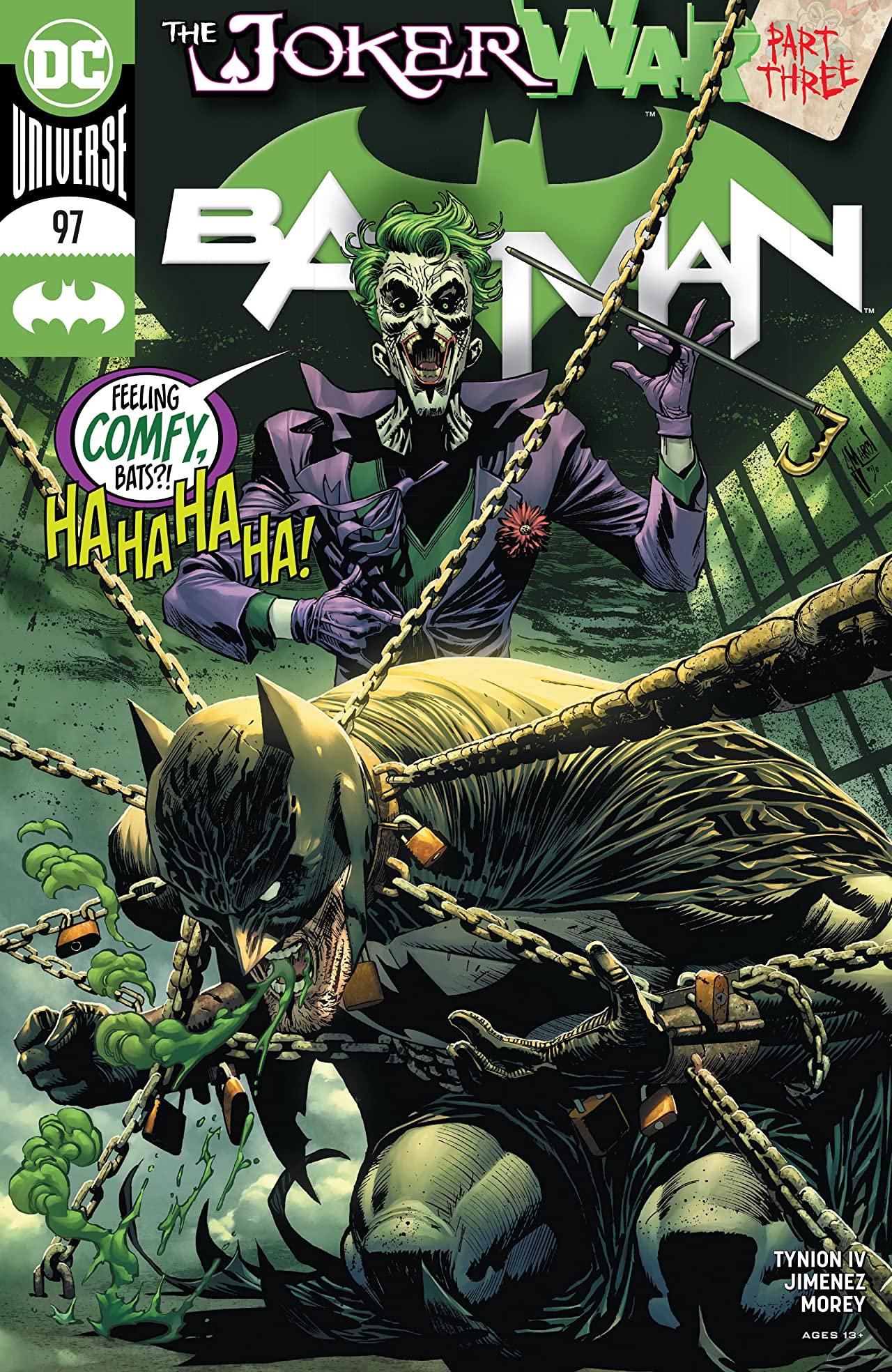 Overview: Batman narrowly escapes from the Joker’s clutches at the Monarch Theater, just in time for Harley Quinn to cure Batman of Punchline’s deadly new toxin.

Synopsis (spoilers ahead): At Tricorner Yards, Joker’s thugs are loading up a shipment of chemicals. Punchline orders the thugs to deliver the shipment to Ace Chemicals because Joker wants a batch of the new toxin cooking by the end of the day. One of the thugs pushes back, asking for more security. When he finds out that his team of masked goons are the security and that no more are coming, he tells Punchline about the murderous vigilante stalking the Narrows known as Clownhunter. Punchline tells the goon to circumvent the Narrows if need be, but that the henchmen should be more afraid of the Joker than of some vigilante.

At the Monarch Theater, Batman fights Joker’s army of reanimated corpses. While Batman fights for his life, Joker tells Batman that killing the Caped Crusader is too easy. Rather, Joker wants the citizens of Gotham to attend a screening of The Mark of Zorro and relive the childhood trauma that created Batman. As Joker laughs at the thought of recreating that experience, then killing the citizens of Gotham afterward, the toxin Punchline injected Batman with kicks in. The corpses all morph into versions of the Joker, and the tide of the battle shifts. Batman is losing. He uses a well-aimed batarang to create an explosion and pave the way for an escape.

As everything burns, Batman tears off a piece of his cape and blindfolds himself. He can’t trust his eyes, so he needs to trust his other senses and fight his way to the center of the battlefield. Once there, Batman activates a portable EMP, which takes down all of Joker’s reanimated corpses. Exhausted, Batman leaves the destroyed theater. Flashbacks of his parents’ murder come to the forefront of his mind before he passes out. Harley Quinn arrives just in time (again) to save Batman.

At a rooftop pool, Joker enjoys the high life with a glass of champagne. He’s wearing a purple royal mantle commonly worn by monarchs with nothing but gold chains and swim trunks underneath. Joker tells Punchline that prior to this, he was nothing but a “dirty, little street clown.” Now, however, this rich lifestyle is growing on him, so he’s going to savor this moment.

Punchline tells Joker that she’s not sure what there is to savor, relaying to Mr. J what the henchmen told her about Clownhunter. Joker delights at this news, noting that in the past, any new vigilantes would always follow Batman’s rules. This new vigilante kills, and because of this, it’s a cause for celebration as Batman’s rulebook has been tossed out. Joker then orders Punchline to send some heavy hitters to crucify Clownhunter. He also gives Punchline the okay to kill Harley once and for all.

Beneath Gotham, in a cave of bizarre flowers, Harley awakens Batman with a hand puppet. She has taken Batman to Eden, a hideout Poison Ivy made long ago for lying low. Harley hands Batman a cup of tea from one of Ivy’s plants, telling him that it’ll negate the effects of Punchline’s drug.

Batman drinks the tea, and then everything goes haywire. Harley tells him that his visions mean that the tea is working. In time, the toxins will be flushed from his system, but until then, Batman will “trip balls” first. As Batman descends into madness, Alfred appears before him.

“I think it’s time we had a serious talk,” Alfred says.

Analysis: This issue is much more fun than the previous one, and it feels like momentum has returned to the Joker War. Batman is on his way to being cured of Punchline’s toxin. We also get a sense of what Joker and Punchline are up to, and unlike previous issues, it’s much more active and engaging. On the one hand, Joker’s hopes of forcing Gothamites to relive Batman’s trauma are up in smoke, but on the other hand, the two are cooking up a massive dose of this new toxin. We know its effects on Batman, so one could assume that once unleashed on Gotham City, we’re in for a violent upheaval that’s presumably from previous Joker plots. More importantly, these are tasks Joker and Punchline are actively working to accomplish, unlike the setup of this arc, where Joker is crowned king without us as readers seeing him doing much of anything to earn it. In early Joker War issues, we saw the plot come to fruition, but we didn’t really see Joker’s hand in setting up the pieces until after the fact. It was much more passive, which was less engaging.

Though Joker appears unconcerned with Clownhunter, this new vigilante is clearly disrupting supply lines to Ace Chemicals. While brief, it adds nuance and weight to Joker and Punchline’s activities. Clownhunter is yet another obstacle that the two have to overcome. In summation, all these points in this issue offer up a variety of actively moving pieces that give us a better sense of the scale and scope of the Joker War and each player’s purpose.

Even more interesting are the lines between good and evil. James Tynion IV and Jorge Jimenez have crafted this issue so that when Joker and Punchline finally appear together, so do Batman and Harley Quinn on the following page. It’s a terrific tag team, as the creative team could have easily paired Batman with virtually any other member of the Bat-Family. In this scenario, with Batman and Harley serving as paragons of light and Joker and Punchline representing chaos, the two teams are perfect foils of each other. It’s a refreshing approach that tries to offer us something new in a scenario that in many ways feels familiar. It’s also a great way to capitalize on the popularity of Harley Quinn, without retreading her past dynamic with the Joker in exactly the same fashion that we’ve seen time and again.

That said, there are many layers at work, which is terrific. This issue reaffirms a deep level of thought and care that has been put into this storyline, and it is one that we can eagerly hope will bear fruit with fresh ideas and new ways of looking at Batman.

Speaking of looking at Batman, this issue is absolutely gorgeous! I feel like a broken record with how often I’ve praised the pairing of artist Jorge Jimenez and colorist Tomeu Morey, but these two are a perfect match. Morey’s work in Batman #97, specifically, is some of the most vibrant and beautiful coloring work yet in this run. There are many backdrops Morey has to play with, everything from a theater bursting into flames to a lush and seemingly not-of-this-Earth subterranean “Eden” of Poison Ivy’s. The level of detail, especially with Eden, is a sight to behold.

My personal favorite scene has to be Joker near that rooftop pool. The colors are very on-brand for Mr. J, but when Jimenez draws us in with a few panels of closeups as Joker and Punchline discuss Clownhunter, our lasting panel is of a bemused Joker with champagne drizzling down his chin. His chin is turned up, not unlike the upturned noses of the elite he was griping about a few pages earlier. Joker looks satisfied with himself, casting a knowing look down upon his protege as champagne leaks down from that painted-on smile of his. In one panel, we know everything we need to know about Joker’s thoughts on the war thus far. We see a clown prince, satisfied with himself, looking down at Punchline — at us — from atop his proverbial throne above Gotham. A few issues from now, we’ll share the same satisfaction when we see Joker fall.

Final Thoughts: We’re seeing some momentum with Joker War, as our creative team sets up important pieces on the board for the next act in what is one show-stopping (and vibrant) display of art from Jorge Jimenez and Tomeu Morey.