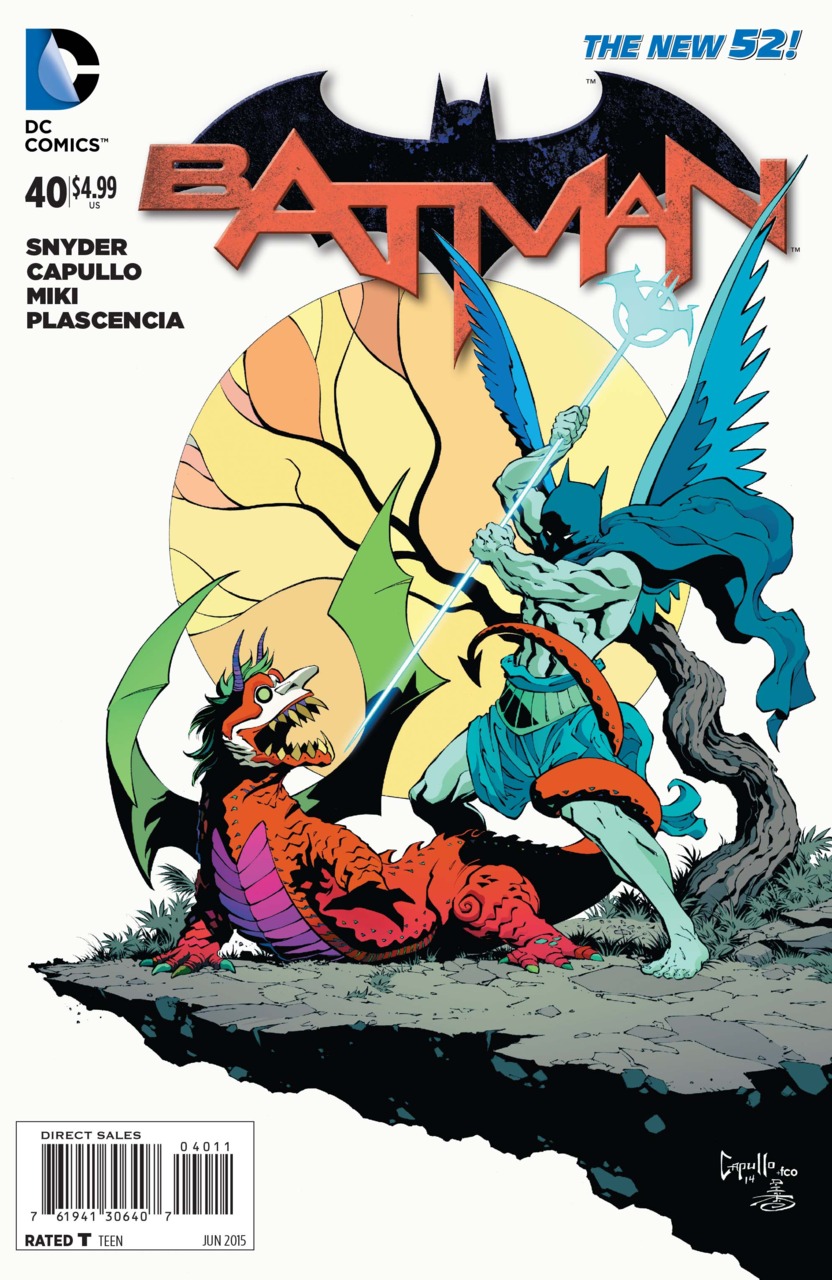 As the final issue of “Batman: Endgame” comes to a conclusion, Batman seems to be recalling the events of how the Joker was created – falling into a vat of chemicals dressed as the villainous Red Hood. Back in the present, Batman and his allies are busy battling against the Jokerized citizens of Gotham City as they attempt to make their way towards the Clown Prince of Crime. As Joker continues to taunt the Dark Knight, Batman instructs Poison Ivy to create a wall of plants surrounding them to hold back the horde of Joker victims…then he teams with Bane to launch him over the wall and towards the Joker. As he reaches the float that the Joker is standing on, Batman latches on to the enormous T-Rex and the Joker comes at him with a chainsaw. Leaping clear of the spinning blades, Batman ensnares the Joker and prepares to extract the fluid from his spine that he needs to cure Gotham of the Joker poison…however Joker seems to have another trick up his sleeve as he taunts Batman “you really thought it would be that easy?!” As Joker unleashes even more toxins into the air, a sonorous laughing echoes throughout the city…so loud that it begins to crack the masks that Batman and the other heroes are wearing.

As Joker grabs a hold of Batman, Joker laughs on how he thought he could extract the cure from his own spine…Joker had tainted it so it couldn’t be used. However…he begins gloating how there is still a pure source deep beneath Gotham City, one that he himself found and used. As Joker goes to remove Batman’s mask in order to stare deep into his eyes…it is revealed to be none other, than Dick Grayson! As Joker realizes that he has been tricked into revealing the dionesium’s true location, he attempts to set off the bombs that he had planted at the source’s site.

Across Gotham, it is revealed that Batman had used Dick as a decoy to find the location and is now descending below the surface with the assistance of Julia Pennyworth. As Batman thinks about his plan to switch places with Dick, he knows that Joker would have been suspicious if there was no Batman to confront him at the battle. Making his way through the tunnels, Batman comes upon a pool of green liquid – the pure dionesium. Batman theorizes that Joker must have been washed down to this spot following their battle in the caves during “Death of the Family” and this is what healed both his injuries and face. As Batman takes a quick sample, Julia reports back that this is indeed the cure that they need to save Gotham. As Batman goes to fill a bat-shaped sphere full of the liquid, Julia yells at Batman to leave the cave immediately – Joker is about to set off the bombs he planted. As the caves begins to explode around him, Batman yells at Julia to pull the sphere to the surface and save the city.

From out of nowhere, Joker appears and stabs Batman in the back as Julia begs the Dark Knight to clip himself to the line get pulled to safety. However…Batman does what is needed and engages his deadliest foe in combat. What follows (in my opinion) cannot be described in words…the art is simply beautiful, deadly and some of the most violent images in a Batman book. Batman and Joker do not hold back as they stab, punch and outright beat each other.

As the two finally succumb to their wounds…a pool of blood drips in between them forming an image of a broken heart. As stalactites fall from the ceiling, Joker comes upon his prey with yet another knife. Joker points out that the dionesium could have saved them both, but Batman foolishly fought him and now they both could perish. As another giant stalactite falls, it knocks the Joker to the floor and seemingly cripples the Clown Prince. Realizing that his death may be imminent, Joker attempts to crawl his way towards the pool to save himself…however is stopped as Batman grabs him. Batman seems to acknowledge that Joker really was the Pale Man from legend, and asks Joker to forgive him…as he does, most of the ceiling caves in and destroys the dionesium pool. Joker cries in agony that Batman has essentially killed them both. As the two foes lay on the floor, Julia can be heard over the communicator begging Batman to open the sphere and drink the dionesium to save himself. Batman whispers that opening it could compromise the sample and thus doom his city. He orders Julia to reel in the sphere and comments that “I’m just going to rest here a little while with my friend.” As the sphere is reeled in to safety, the entire cavern is shown to collapse around the Dark Knight.

Two weeks later, Alfred is lying in bed and asks Julia to close the curtains of his room…outside in the sky dozens of red batsignals can be seen blazing across the sky. Alfred comments that he keeps thinking that he is going to realize that is dreaming, but Julia sadly admits that Bruce is really gone. Julia also suggests replacing her father’s lost hand, but Alfred states that there isn’t anyone left to mend. She then goes on to comment that being human, Bruce seemed to not protect himself against the supernatural or magical…like he was daring death itself. She then states that he left a note…but it seems cryptic and brief. However Alfred seems to know its meaning and shares some words of wisdom:

“It means he was flawed. He never liked to look at his own death, Julia. He only thought of preventing it. But the last few days, I know he had to look at it many times, in many ways. My hope was – and always has been – that somehow, seeing it, understanding it, would lead him to find a way out. I’ve always known he’d never quit, but perhaps at least, like you said, he might find some greater prevention. Some escape…but that’s foolish. And it’s why Joker…why he was wrong to tempt Batman with a happy ending. It’s what he never really understood about Batman, with his offers of immortality and transcendence…it’s the thing that Bruce knew to be true about Batman, more than anything else. The thing we all know, deep down, but don’t like to admit…that the story of Batman is, and always will be, a tragedy. Bruce would never have let it be anything else. Batman could live forever. He could escape. But he doesn’t. He dies, just like every one of us, even though he doesn’t have to. That’s his flaw. But it’s also his greatest strength. The very thing that makes him immortal. He says, we’re in this together. He says, live bravely in the time you have and smile at the void. That’s why the note says what it does. Why it’s only one word. Why Batman’s last message is, and will always be…’HA’.”

I guess I find myself a little…overwhelmed by this issue. Not only did we see a climactic battle between the Dark Knight and his most deadly foe. But we saw the outcome of “what happens if Batman and Joker fought to the death.” Probably a question that most of us fans have posed at one time or another…something that we have pondered and thought about, but never thought that we would ever get a definitive answer to. Well now we have. What happens when Batman and Joker fight to the death? Well, both of them end up dead.

Of course, we all know that this cannot be the end to Batman or his story…in a recent interview both Scott Snyder and Greg Capullo have said that Bruce will survive. But unlike stories in the past, there isn’t a backup plan to pull our hero from the brink of death…Batman knowingly went into his destruction, with no way of getting himself back out.

It seems that we are back to a point where most of the world will believe the Dark Knight to have perished…and we have already seen what will become of his legacy.

Besides the unforeseen ending, this issue showcased the real relationship between Batman and the Joker, and what Batman is willing to do to save his city. Although it has always been expressed that Batman would die to save Gotham…in this story, he actually does.

Additionally in this story we get some answers to the burning questions of Joker’s immorality…thankfully that wasn’t real. The dionesium was shown to have regenerated the Clown Prince and what spurred his recent bought of “am I immortal?” Although it was never explained how Joker perpetrated his immortality, his reaching towards the dionesium before the ceiling comes down directly points to his lies. He is truly devastated when it is destroyed and curses Batman for allowing it to happen.

Also…did anyone else call Dick Grayson showing up?! Cuz I did! Well…not necessarily acting as Batman, but I did express hope (in my last review) that Dick would make a physical appearance within “Endgames” pages. I also liked that he pulled a switch with Bruce and managed to pull off a nice pun before he passes out due to Joker toxin.

I also have to admit that I totally cried at the end of this issue. Just read that last monologue of Alfred’s and I can’t imagine any Batman fan who doesn’t at least feel completely depressed afterwards. It reminded me a lot of “Dark Knight Rises” when Alfred is crying before the graves of Thomas and Martha Wayne and declares that he failed them…another sad Alfred moment. But what he says makes complete sense…deep down Batman’s story can only end tragically. He doesn’t get to live forever; he doesn’t find a way to escape; he doesn’t have a “happy ending.” Batman goes down fighting for his city and ends with his death. Just like everyone else, Batman dies.

Overall, I think that Scott Synder has once again knocked this story out of the park…doing the unthinkable and killing Batman. Although there are some plot points left to one’s own decision, this story started with a surprise…and ended with the biggest one of all. For some people, we got exactly what we’ve always wanted to see. But truthfully didn’t want the answer to.

Although I mentioned earlier, Greg Capullo’s art is truly astounding in this issue. The fight sequence is extremely brutal and some of the images are quite interesting – from the bloody smile in Batman’s back (where the eyes are the knives sticking out his back), all the way to the pool of blood shaped like a broken heart…excellent work indeed.

I would definitely say that every fan of the Caped Crusader needs to read this story. It is emotional, action packed, mysterious and delivers on all levels.