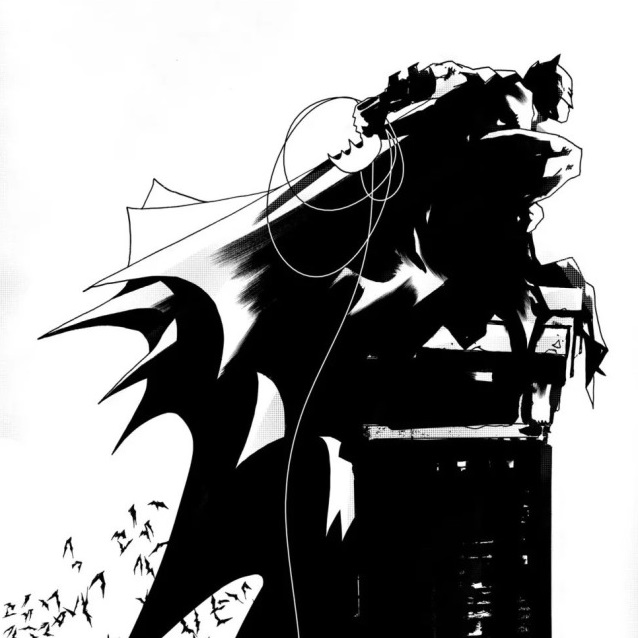 Synopsis: After saving a young parishioner, a priest runs back into his church as it is consumed by fire and collapses. Batman arrives, looking for survivors. He calls out to the priest to determine the priest’s location. Batman begins to hear the priest sing the words to the hymn “The Last Farewell.” Batman uses the singing to locate the trapped father and lowers himself to the priest’s location as the man finishes his hymn. Batman ensures the priest that all of the children were saved. The priest is not doing well, and Batman doesn’t have the tools needed to treat him. Batman attempts to leave to get gear, but the priest asks Batman to stay, knowing that he is about to die.

Batman laments over knowing he wasn’t there in time to save the priest and apologizes. The priest, however, comforts Bruce and thanks the hero for remaining with him in his final moments. He asks Batman, now unmasked, if he knows of the Parable of the Unjust Judge and goes to give his personal interpretation of its meaning, before passing away. Batman carries the body of the priest away from the church and lays the body on the ground. He places a kiss on the priest’s forehead before leaving.

Analysis: Tom King surely enjoys killing people. That being said, this was a truly touching story and highlights, once again, how King does his best when he writes short stories and tales. I truly appreciated the quickly established connection between Batman and the dying priest. King strengthened this connection by allowing Bruce to unmask while comforting the priest in his final moments.  This was sealed with the kiss on the forehead. If anyone ever wants to see a humanized Batman, they need only to pick up a Tom King book.

King teamed up with certain artists always sets up some great work. Whether it’s Lee Weeks or Clay Mann, you’re bound to get a good story with some great art. This also applies to Mitch Gerads. I’ve enjoyed this creative tandem since they came together on Sheriff of Babylon. That appreciation continues with this story. Whether it was the burning church or the degree of emotion that he applied to both the priest as his life slipped away or the grief on Bruce’s face as the priest died, no number of words could have painted a similar picture. I could only imagine if colors were applier to this. Easily my favorite story… if not for one more (keep reading).

Story #2: “All Cats Are Grey” by writer and artist Sophie Campbell

Synopsis: Catwoman takes off after stealing a diamond but is immediately pursued by Batman. He nabs her, taking the stolen diamond from her before she is able to make another swift getaway. Sitting on a ledge pondering how she failed to escape with the diamond, a white cat comes and sits next to Selina. She attempts to pet it, but the cat takes off and hides, blending in with the snow-covered roof. This gives Selina a keen idea. She grabs some white material and makes herself a new costume before heading out into the cold Gotham night.

Moments later, Catwoman is on the run again with the prized diamond. As before, Batman is in pursuit. She rounds the corner and hides, camouflaging herself with the snow, confusing Batman as to her whereabouts. She pounces, landing on top of him. She’s claimed another prize.

Analysis: I was first exposed to the “silent” comics back in G.I. Joe: A Real American Hero #21 with the story “Silent Interlude.” Campbell’s story is presented in the same manner. Much like Larry Hama in 1984, Sophie Campbell does a great job in telling her story through her art. While this is a typical Batman chasing Catwoman, who in turn chases Batman story, credit must be given to the fact that it was told with no literal dialogue. This was very good work.

Story #3: “The Spill” by writer and artist Gabriel Hardman and writer Corinna Bechko

Synopsis: Batman is racing down the streets of Gotham in pursuit of the Joker when a massive EMP hits the city, causing the Batmobile to lose power, crash through a bridge rail, and land in a drainage canal. Batman isn’t sure how long he’s been out when he finally awakens, but he knows he’s in trouble as the runoff from the rain continues to rise. The Gotham spillway is also beginning to fail. Unable to reach his rebreather, Batman attempts to free himself by using the grapnel gun to lift the Batmobile. This fails, however, thanks to interference by the Joker, who has come to see the demise of his arch-nemesis. Batman attempts to warn the Joker that he is in danger as well, but the Joker isn’t hearing any of it… until it’s too late. The spillway fails, overtaking the two rivals. With only one shot, Batman uses the used grapnel gun to snag the Joker by his arm, pulling him from the water and robbing him of another chance to see Batman die.

Analysis: There are two things I dislike about this story. Anyone who follows TBU on Discord or me over social media knows that the Batman/Joker clash really needs a break, or at least the readers do. The fact is this story could have included any other of Batman’s rogues with much of the same effect. DC feels that the Joker sells and will continue to inundate us with stories of the Clown Prince of Crime. There is nothing special about the story. It’s quite simplistic, which also adds to the idea the any of the Rogue’s Gallery could have played a part in it and it would have had the same effect.

The second thing I don’t like about this story is actually a compliment. This is another story whose art, much like the Gerads art in the first story, would look great with colors applied to it. The artwork and shading are wonderful, although a few panels could be a little lighter. That notwithstanding, this would be a piece I would pick up for the art alone.

Synopsis: There’s a new Batman in Gotham. However, this one dresses in white, and his actions are getting darker and more violent. As things escalate, Batman pursues his evil doppelganger, who suddenly appears next to him in his own version of the Bat-Jet. He’s stolen Bruce’s identity, money, and has now hacked into his communication system, talking to him. He wants everything that Bruce has to make it his own.

Suddenly, something takes out an engine on the Bat-Jet, and as Bruce begins to lose altitude, he comes face-to-face with his evil twin. That’s when Bruce sees a monstrous ship hovering above the city. Suddenly there’s another blast and Evil-Bat loses the exact same engine on his plane, crashing into the mammoth ship and dragging Bruce with it. As Bruce walks past the lifeless body of his evil twin, he enters a corridor that leads into a huge chamber – a dark version of his own Batcave. At the computer are two individuals – Thomas and Martha Wayne.

Analysis: This was a very tough story to get through, both artistically and story-wise. There’s dark and then there’s this. I fail to see the point of the story other than to bring a Bruce Wayne nightmare to life. The presentation just wasn’t good, and the art didn’t make it better. Easily, my least favorite story of the issue.

Story #5: “The Devil is in the Details” by writer and artist David Aja

Synopsis: There have been several murders in Gotham over the past month, leaving the decapitated bodies of three people and no clues to help the GCPD. Batman, however, has a name of a possible lead and attempts to learn more. Somehow, the police have arrived as well, which is concerning to Batman as he was never informed of this by Captain Jim Gordon. He goes to take a closer look and discovers that his lead in the case has been murdered and decapitated like the other victims, and the lead’s body is lying in the middle of a Satanic symbol.

Later, Batman and Gordon discuss the case. There hasn’t been a push to solve it due to the fact that all of the victims had records. Batman mentions the cops he saw at the scene, leaving Gordon to acknowledge the corruption in the ranks of the GCPD.

The next evening in the Batcave, Batman is studying the case after a fifth victim is discovered. Batman’s research reveals that the symbols left at each murder were used as a part of a conjuring ritual to bring about the demon Frimost. For Frimost to “arrive,” however, two more sacrifices must be made.

Analysis: What a great story to close out the issue. Aja does a great job in presenting his dark noir story in the form of an old comic strip. As someone who grew up reading the old newspaper comic strips, this brought back a lot of old memories. Aja’s depiction of Batman as Frimost coming to save the people of Gotham from evil, including the corrupt police, is genius as well. I didn’t pick this up on my first read as I was stuck trying to pinpoint when after Year One this story took place. But on a second read, it struck me, and I immediately smiled at how good and cleverly it was done. Aja’s art quickly took me to Year One, which probably led me to wonder when it took place. But the fact remains that the art was great. This is clearly my favorite story of the issue.

As with the first issue, Batman: Black and White #2 provides a mixed bag story-wise. Unlike the first issue, however, outside of one story, the art in issue #2 provides some great visuals for the reader. Readers should also take notice of the great pin-ups that were included, which were also quite impeccable.