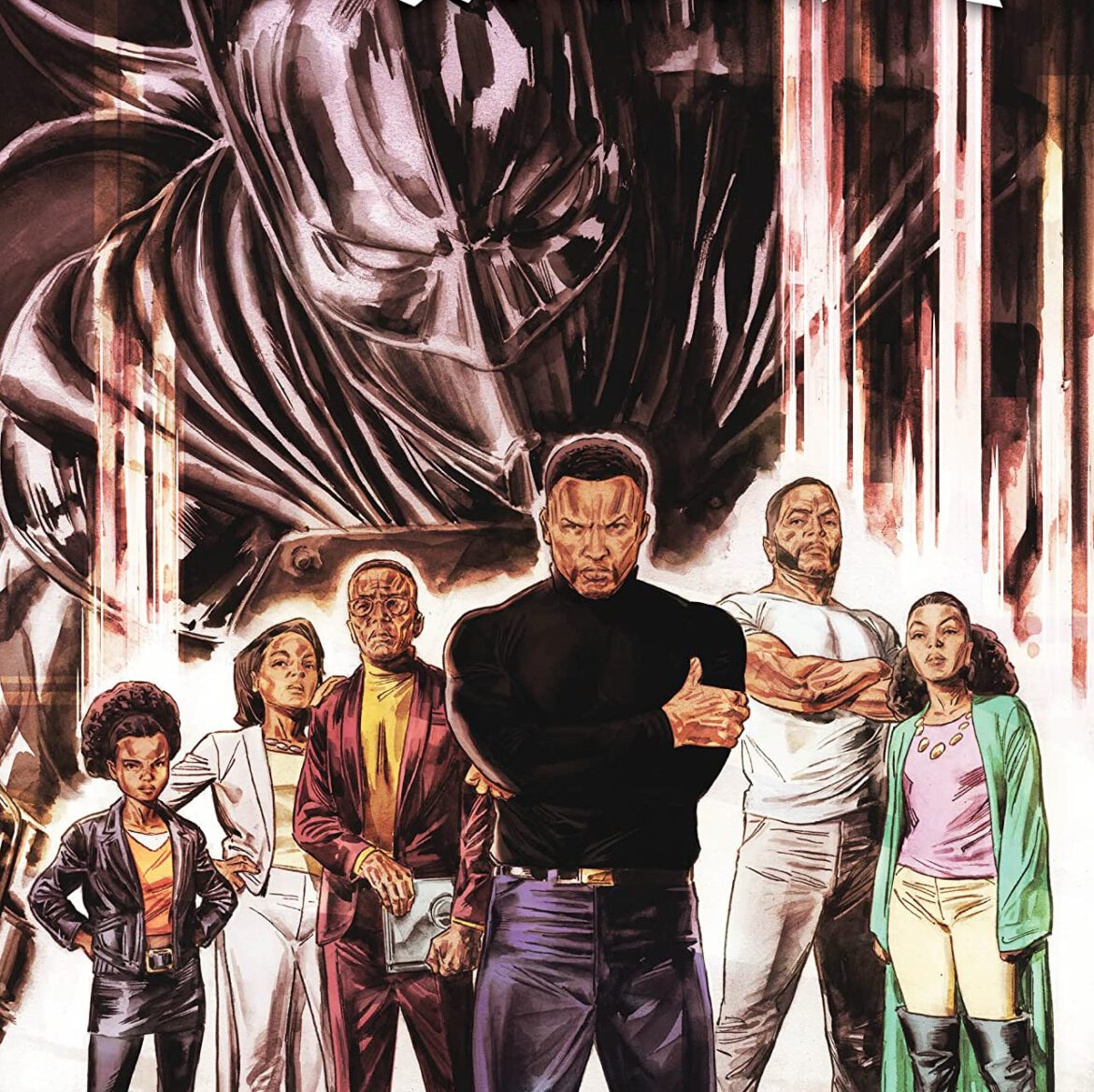 Overview: The Next Batman: Second Son #1 collects chapters #1-3 from the digital-first series as Tim Fox is called home amidst a Gotham reeling from the events of Joker War, as well as the rise of a new anti-mask policy.

Synopsis (spoilers ahead): In the jungles of Vietnam, Tim Fox, the youngest son of Lucius and Tanya Fox, is on reconnaissance, awaiting his chance to make a move on Tyler Arkadine, who’s suspected of trafficking. He plans to expose Arkadine and take him down by stealing secrets from his computer. Fox’s partner, Vol, puts things in motion that allows Tim to get inside to where the computer is. However, a trap is sprung as the sneaky Arkadine knows that Tim is there. Tim is going to die without even knowing what he’s dying for. Tim is able to fight back and escape death, albeit empty-handed due to failing the mission at hand. He returns to his room to find that he isn’t alone. Cole Cash, aka the Grifter, is there. Tim’s father wants Tim to return home.

Returning to Gotham, Tim, who calls himself Jace, is met by his mother and his two sisters, Tamara and Tiffany, who all express their happiness in seeing the youngest Fox son return home. The oldest of the Fox brothers, Luke, is not there, however. He is elsewhere in Gotham, in his role as the masked vigilante Batwing, taking down a xenophobic gunman attacking a family-run supermarket. As the shooter is apprehended, the GCPD arrives. They’re not pleased, however, as the anti-mask sentiment in Gotham continues to grow throughout the city. Luke leaves with only the appreciation of the family he saved. While this is going on, Lucius is debriefing Grifter on the events prior to Jace’s return home. Unfortunately, the usually reliable Cash has little to offer. Elsewhere in Gotham, the city’s new mayor, Christopher Nakano, is trying to recruit Renee Montoya to become the city’s next police commissioner and lead the GCPD as Nakano implements his new vision of the city, free of masks. The feisty veteran has concerns and isn’t ready to commit as she feels ill-prepared for the position, despite her rise through the ranks. The mayor gives her time to think things over. Back at the Fox home, things begin to unravel. Tim (Jace) scoffs at the family’s newfound wealth. Luke clearly is not happy that his brother is home, completely ignoring him. Tim leaves and sits outside with Tam. Yet, he can’t find the right words, saying that there’s nothing in Gotham for him. His sister, who has loved her brother unconditionally despite his shortcomings, takes offense to this. She leaves her brother in disgust.

A-Day happens, and Batwing is out looking for the whereabouts of the Joker. Unfortunately, he comes up empty-handed. As the story of the events at Arkham Asylum plays out on the news, Tim pays a visit to his father’s office. There is clear discontent between father and son as they immediately argue over everything from Tim becoming Jace to the events that took place when Tim was only seventeen years old that will clearly come up at a deposition he is scheduled to attend. Lucius wants him to meet with a team of lawyers, but Tim refuses, stating that he will state the truth as he walks away. At Arkham Asylum, Mayor Nakano meets with Renee Montoya. She lays out her terms for accepting the commissioner’s position, which the mayor agrees to. The deal is sealed with a handshake. Back at the Fox home, the young Tiffany mediates a gathering with her two brothers. Unfortunately, they immediately begin to argue with such fierceness that Tam passes out, crashing to the floor.

Analysis: Coming out of Future State as the reviewer on Future State: The Next Batman, I was left with a bad taste in my mouth over the gaping holes in the story of Tim “Jace” Fox, particularly those pertaining to the rifts in the Fox family. What caused Tam to be in the coma? What events brought Tim and the mysterious Vol together as partners? What’s the story behind the name “Jace” (promised to be answered in this series)? What caused Tim to pick up the mantle of the Bat in the pages of Future State? While all these questions have not been answered yet, The Next Batman: Second Son #1 does a decent job of beginning to fill in those holes. Ridley provides some context in quickly addressing some of those in the first few pages of the issue, which comprises the first three chapters of the digital-first series.

And yet, while we get some questions answered, Ridley leaves the doors open to new questions. By the end of The Next Batman: Second Son #1, we see the event that leads to Tamara being in a coma during Future State: The Next Batman, a new question of what leaves her disabled with a cane rises. It is clear the there’s a difference of opinions in the Fox family’s newfound wealth in the aftermath of the Joker War, especially from Tim, the discontent amongst them seems to go deeper and beyond that. Could the differences be what led the youngest Fox son to leave Gotham in the first place as it is obvious from the issue (and if you read the Joker War tie-ins) that Tim has been gone a while. Ridley’s pattern of closing a door while opening another is a terrific way of keeping a reader interested in the story. And I can’t go without complimenting him on using Tiff, the youngest, as the glue trying to keep the family together. I would imagine as the story moves on, my issues from Future State will be resolved, which further backs up my assertion that the event should have been longer to include this prequel. However, credit is due as it is clear where the story is taking place, beginning slightly before A-Day. Credit to James Tynion and the rest of the Batman writers under group editor Ben Abernathy for keeping things tied together. This has been greatly needed in the Batman Universe.

From the standpoint of art, I was concerned with the setup of the issue from the three digital chapters transitioning from Tony Akins in the first two chapters and Travel Foreman in chapter 3. However, my concerns were quelled rather quickly as I noticed the difference from one artist to the next was quite similar in style. Obviously, having the team of Mark Morales and Rex Lokus on inks and colors, respectively, helps to keep things in the same light. Their consistent palette makes it easy to get through the panels with ease and a sense of uniformity.

This notwithstanding, however, Akins’ and Foreman’s styles of drawing seems somewhat simplistic, as if it were drawn for a younger crowd. Compared to what we got from Nick Derington and Laura Braga in Future State, the art was somewhat of a letdown. It wasn’t bad; it was a slight disappointment. I wish there were more.

Overall, The Next Batman: Second Son #1 is a quick read that answers questions while asking new ones to keep you interested in the story. I would imagine that this will be the pattern through the other issues as they are released. As someone following the story by reading the digital chapters as well, reading the print issue is likely better for the reader. And as with most of what DC puts out, the story seems best read as a whole.

The Next Batman: Second Son #1

The Next Batman: Second Son does an excellent job at beginning to answer a lot of questions opened in the four issues of Future State: The Next Batman, while still providing more to keep the reader interested. Looking forward to the continuing chapters of the saga.