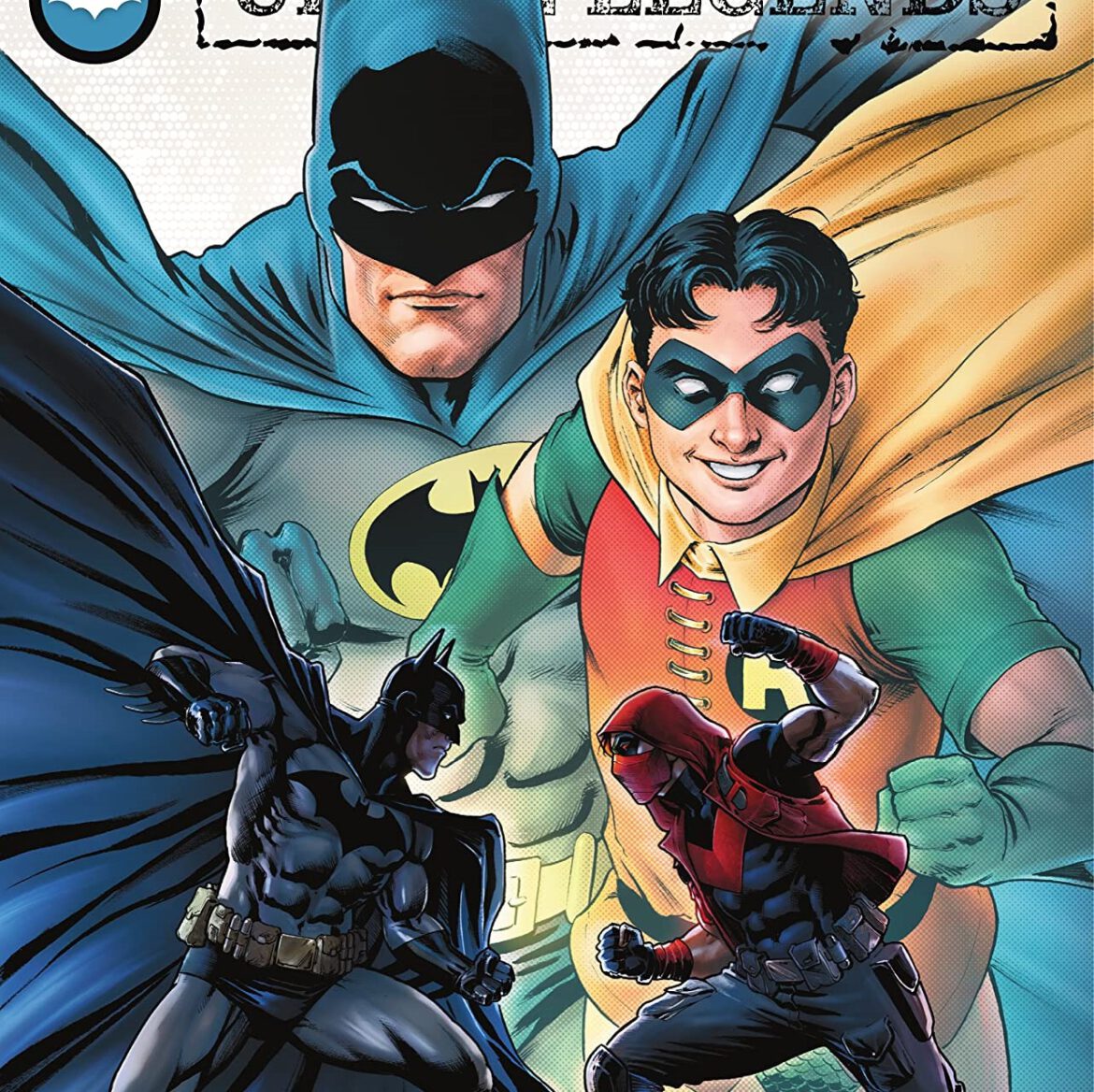 Overview: In Batman: Urban Legends #6, Jason Todd mends bridges with Batman, Tim Drake discovers something about himself, and Zealot and Black Canary are featured in standalone stories.

Synopsis: Oracle lets Jason into “The Garage,” where he finds a single dose of the untested antidote for the cheerdrops on which Batman has been working. Inside Cheer’s lair, an incapacitated Batman is inhaling the concentrated cheer gas. Cheer monologues to his minions before Jason, clad in a Batsuit, bursts in. He takes Mr. Freeze out but is struck with cheer gas just as he realizes he has to save the antidote for Batman. Immediately, Jason travels in his mind to a scene where Bruce and he are at peace and the Bat-Family can all gather on a sunny day, and not as superheroes. Jason manages to resist the effects of the gas, but Cheer threatens to kill Tyler’s mother, who remains in a coma at Gotham General. Jason hesitates for a moment. Then the cavalry arrives, as Nightwing, Signal, Orphan, Batwoman, and Spoiler swoop in. They dispose of the minions and Jason administers the antidote to Batman. As he recovers, he grows enraged and chases after Cheer, catching up with him on the rooftop. He dangles Cheer off of the building as he fumes about what Cheer did is so much worse than Scarecrow’s obsession with showing Batman his fears.

Jason talks Batman down and Batman recovers himself. Three weeks later Tyler (“Blue Hood”) and his mother are settling into an apartment, assisted by Leslie Thompkins and Jason. Outside, Jason talks with Bruce, and Jason tells Bruce that he is giving up guns because while some people deserve to die, “death has a way of rippling out to others.” Jason leaves, and Bruce muses about the happiness the cheer gas showed him, which involved Jason killing the Joker and the Bat-Family finding peace. When Jason arrives, he finds a note from Bruce on a box that has a Bat-emblazoned Red Hood suit inside. The note reads “Only if you want it. P.S. Family dinner at my place Thursday.”

Analysis: Eighteenth-century British lexicographer Samuel Johnson is attributed with the following devastating review: ‘Your manuscript is both original and good. Unfortunately, the original parts are not good and the good parts are not original.’ Despite my view that this is a strong ending to a solid story, “Cheer” does suffer from some of the deficiencies hinted at by Johnson’s famous lines. Namely, virtually all of the themes and motifs represented in the story are extremely well-represented in Batman and Red Hood arcs. This makes any real character growth difficult since we have long since grown accustomed to the particular problems with which the characters grapple.

Batman wrestles with his fear and his anger. So does Red Hood. Batman is tempted to kill. So is Red Hood. Red Hood uses firearms. He is afraid of disappointing a father figure. He is a loner but needs the Bat-Family. Etc., etc. While I enjoy many of these themes and found the end of “Cheer” a solid and reasonably satisfying conclusion, it’s fair to say that there is not much going on here. Overall, it’s a well-crafted and well-illustrated story that led Batman: Urban Legends #6, but does not cover much new ground or scale any heights.

Synopsis: Wonder Woman impales a villain on her sword. She fights her way into the office of Maxwell Lord just as he manages to escape. She removes her Wonder Woman costume. Six days later, Maxwell Lord is in Montenegro and Zealot disposes of his guards. Just as she moves in for the kill, Wonder Woman herself shows up to defend him. They argue and exchange blows, with Zealot drawing blood, Lord escapes. Wonder Woman flies after him, and Zealot collects Wonder Woman’s blood from her sword, radioing that she has what she came for.

Analysis: As seems to be typical with Rosenberg-written stories, I do not really understand what is going on here. Wonder Woman and Zealot clash. Maxwell Lord escapes. Zealot collects Wonder Woman’s blood. Why? What does any of this actually have to do with Gotham? Or the Bat-Family? I do not know and I am not especially interested.

Synopsis: Robin bursts in on the Chaos Monsters and saves Bernard. He tells Bernard to flee but Bernard says that he has been training and refuses. They fight well but are surrounded. Bernard tells Robin to inform Tim Drake that he helped Bernard realize his “true self,” and that he wishes he could have finished their date. They manage to overcome their enemies. Later, Tim confides to Detective Williams that he broke up with his girlfriend for no reason. Williams advises Tim to stop trying to fit into a mold that he expects for himself. Later, Tim goes to Bernard’s house and they talk. Bernard asks Tim to go on a date, and Tim smiles and says that he wants that.

Analysis: I love Tim Drake and am excited to see him come out as queer, if that is indeed what this story in Batman: Urban Legends #6 is meant to show. Still, I cannot help but feel that most of the rest of the three-part story was just filler to get to this (admittedly weighty) moment. I also think that the continued mystery of why Tim and Stephanie broke up off-panel (“for no reason”??) is a disservice to the readers. If Tim’s coming out is connected to the break-up, that would be interesting and important, but it should be explained and shown to the readers in the book itself. The story is set to continue in Urban Legends #10, so perhaps there remains time to explain this, but it really should have happened before now.

Synopsis: Green Arrow is helping Black Canary with target practice at the Hall of Justice. Oracle summons Black Canary and asks her to infiltrate an organization named T.R.U.S.T (“Transparent Researchers United for Strategy and Technology”). Black Canary’s cover is that she is a free agent and no longer associated with the Bat-Family. Oracle remarks that she’ll be given access to all needed Batman tech, accounts, and a cool car. Black Canary agrees and jets to London to attend the T.R.U.S.T gala. Armed men break in and Black Canary reveals herself and disposes of them.

The head of T.R.U.S.T, Juliette Ballantine, invites Black Canary to her home and invites her to join T.R.U.S.T. She says that there is a catch and advises that Black Canary will need to team up with a blunt instrument. That instrument is Deathstroke. The scene switches to an airship in which a minion advises Lady Talia of some of the details of the mission and the forthcoming Shadow War.

Analysis: The final story in Batman: Urban Legends #6 obviously serves to set the stage for Deathstroke Inc #1. I imagine that if you avidly read and follow Deathstroke as a character, you may find this story interesting. I do not and hence I did not. The banter between Black Canary and Oracle is interesting, and it is nice to see a Green Arrow appearance in a Bat-Book, but other than that this story does not offer much more than a prequel to a comic some people may read.

The “Cheer” story closes with a flourish, even if it lacks any real originality or character development. Tim Drake’s coming out is hugely important, but the narrative of which it is part feels almost irrelevant by comparison, and unfortunately, nothing the writer does disabuses us of that sentiment. Although I enjoyed the issue for the Cheer story alone, the quality of the stories remains uneven at best. In addition, a decent portion of the scenes for the stories take place far away from Gotham (Montenegro, London, etc.), which is a strange choice for a collection supposedly centered on the Gotham cityscape.