Review: Legends of the Dark Knight #4 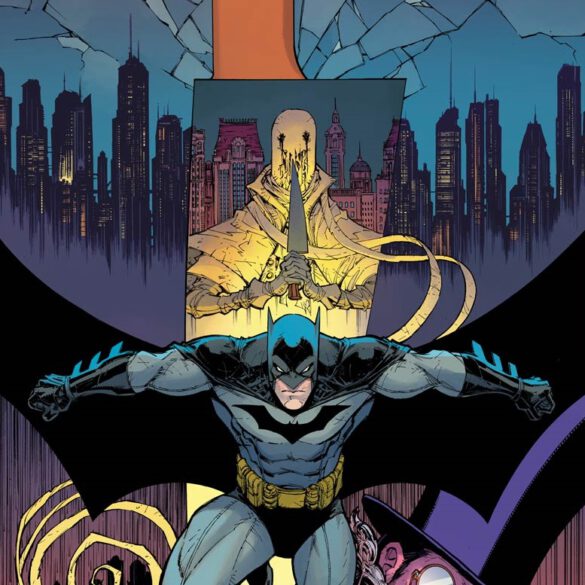 Overview: In Legends of the Dark Knight #4, being suspicious of Oswald Cobblepot’s interest in an antique box, Bruce Wayne uncovers the truth behind the actions of a serial killer from over a century ago.

Synopsis (spoilers ahead): Legends of the Dark Knight #4 begins on a dark and stormy night in Gotham City in 1910. A middle-aged Charles Cobblepot searches his mansion for his servant, but is approached and attacked by a ghostly figure who proclaims guilt upon him.

In the present, Bruce Wayne and Alfred Pennyworth attend an auction for charity. Soon, however, Oswald Cobblepot arrives and places a bid on an item. This prompts Bruce to outbid the Penguin, and he promptly leaves to analyze the antique, suspicious of Cobblepot’s motives.

At the Batcave, Batman examines the contents and discovers an old Gotham Gazette article detailing the crime spree of the West End Wraith, a serial killer in the early 1900’s who targeted the wealthy.

He also finds the remains of the Wraith’s costume, with a note pinned to it with the words ‘See Me’ scribbled upon it.

While Batman and Alfred try to piece together the Penguin’s intentions, they are alerted to a security breach. Outside Wayne Manor, several of Penguin’s henchmen steal their way inward, only to be approached by the Batmobile, driven by Alfred. He scares away the henchman, but unbeknownst to him, Cobblepot is breaking in through to the Manor.

As this is taking place, Batman is preoccupied with investigating, through holographic technology, the murder of Charles Cobblepot. Soon, he spots the West End Wraith and follows his trail, while profiling the murderer’s motives. The five men who were murdered were men of prominence and were responsible for the foundations of Gotham City, but seemed to share a secret.

Soon, Batman identifies the Wraith as Angelina Tatum; Charles Cobblepot’s maid. She had brought charges upon her employer, but those were thrown out by the judge, Henry Wayne, ancestor to Bruce.

Back at the Manor, Oswald Cobblepot chases down Alfred, intent on retrieving the box he feels is rightfully his. Batman interferes, however, and soon he is taken down. We then learn that Angelina Tatum, dissatisfied with her treatment by Cobblepot as well as the law, became a vigilante herself, targeting those who abused their maidservants.

In light of this ancient hidden crime, Bruce Wayne donates money enough to open three new shelters for the Women’s Center and to provide legal aid to those without means.

Promising that both Batman and Bruce Wayne will do better to help those who feel failed by the system, Bruce lays flowers upon Angelina’s modest gravestone, hoping to put the Wraith of West End to a peaceful rest.

Analysis: This single issue (or two chapters of the digital series) story found in Legends of the Dark Knight #4 is a not-so-subtle message on the mistreatment of the lower-class servant roles, especially and specifically of women in the turn of the century Gotham City. It is beautifully illustrated and written, both visually and in its reinforcement of the message.

We never hear from the voice of the Wraith herself, the maidservant Angelina Tatum. Everything we uncover is told from the future, and from Batman’s deductions. In fact, we don’t hear from a woman at all in this issue: As they have been treated here, they were only to be seen, and not heard, much less heard FROM. And even the ‘seeing’ part was nominal at best, as we are told with a scrap of paper found attached later to the recovered costume which simply says ‘See Me’. After suffering from the abuse of her employer and, further, at the hands of the law by Judge Henry Wayne, the only effective method she felt was left to her was through action and violence at those who refused to see or listen to the human beings in their employ. The only way for Angelina Tatum to express to those that, like Charles Cobblepot, they needed to ‘See Me’ was to confront them on their own terms; unfortunately, through dread violence.

Why did Judge Wayne dismiss the charges brought against Cobblepot? The story suggests the likely notion that Wayne and Cobblepot were men of high society and great influence; and who would bother such an important figurehead of the metropolis of Gotham City with accusations of abuse? Especially from a woman who was hired to assist him with menial tasks?

This woman, this Wraith, was such an inconvenient stain for the Gotham elite that, decades later, Oswald Cobblepot was willing to pay an exorbitant amount of money to obtain and extinguish her identity from the embarrassment of the riches of Gotham history. He even tells Bruce Wayne that it would also be to his own family’s benefit to erase her, too, assuming that Wayne would agree and even assist him.

Many fans of Batman would see in this story a parallel to the Batman: The Animated Series film Mask of the Phantasm, which also serves as a vengeful wraith that preys on the Gotham elite, although in that story the antihero targets the organized crime members of the elite on a very personal vendetta. This Wraith, however, is a bit more of a pure symbol of the pain of injustice than of vengeful anger. The Phantasm came from the elite herself, while the Wraith is of an entirely different social class.

In the end, Angelina Tatum wound up with a simple tombstone, simple and nondescript, as lowly in importance and stature as the wealthy family graves of Gotham are larger than life and illustrative. But the Wraith of West End clung to justice and legend far after the generations were forgotten, and continued to haunt the egos of the pillars of the city.

Legends of the Dark Knight #4

This short tale makes effective use of its space to run home a deep and resounding message, with a beautiful and cohesive display of artwork. The storytelling itself is a wonderful blend of action and detective work, and combines the feeling of a classic Sherlock Holmes short with a message of morality that is as authentic now as it was in the early 1900s.