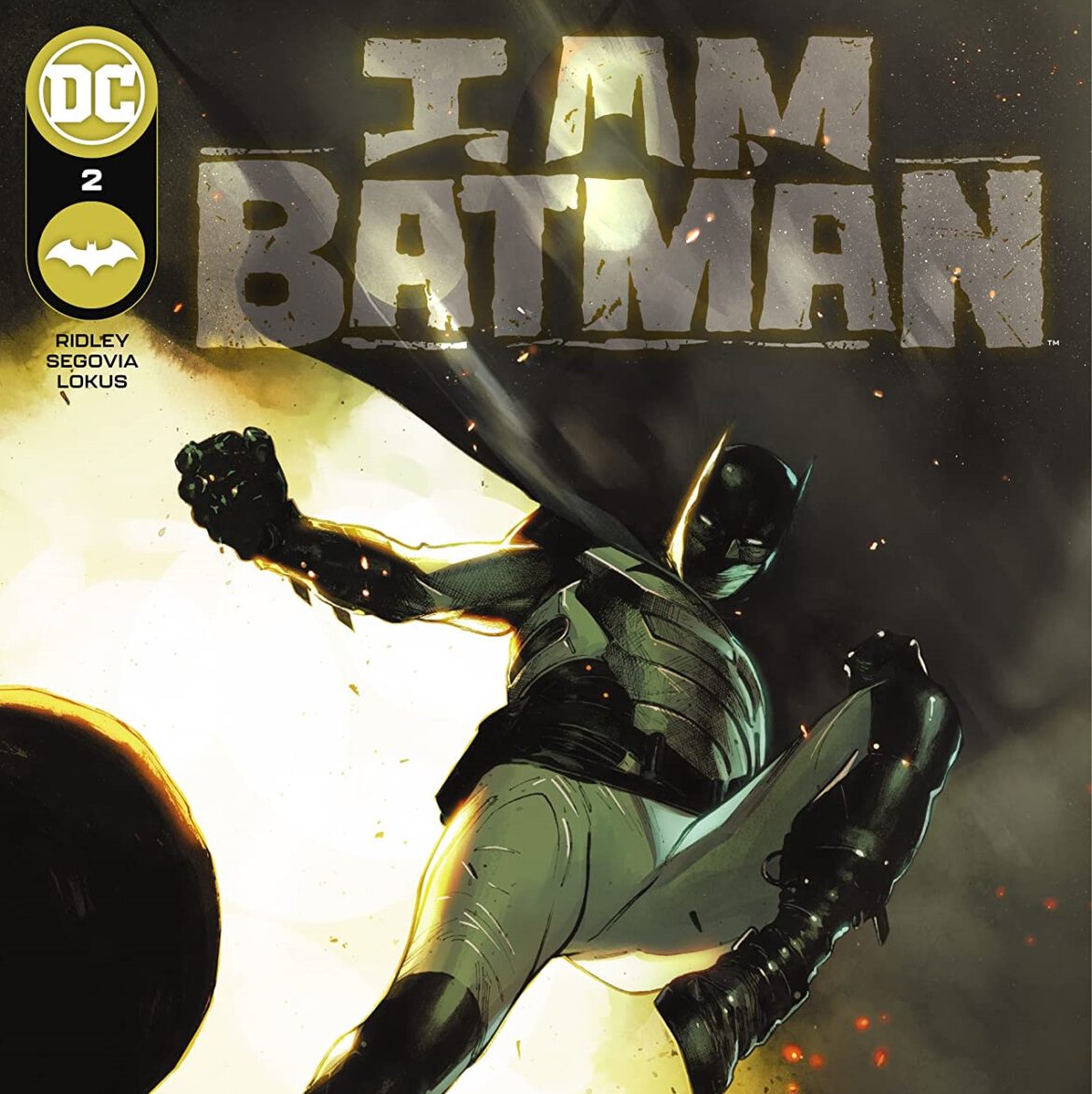 Overview: In I Am Batman #2, while the GCPD deliberate over the circumstances of Anarky’s murderer, Batman digs deeper into tracking down Seer.

Synopsis (spoilers ahead): A brief flashback shows us an injured Anarky trudging down an alley as I Am Batman #2 begins. He becomes aware of his pursuer and raises his arms in surrender, only to be shot and left for dead. Over this scene is a monologue suggesting that he had information he sought to protect while exposing the true motives behind the powerful actors of Gotham City.

Elsewhere, the Next Batman, Tim ‘Jace’ Fox, pursues and interrogates Vince Farrell, the owner of the warehouse where the six corpses tied to Tyler Arkadine were staged. His questioning leads to a dead end, however: the owner leased it to a stranger, no questions asked. Batman leaves him for the police and heads back out into the night.

At the GCPD, Chubb and Whitaker interrogate Morris Caulfield, a member of the Moral Authority, a radical group that seeks to end the government conspiracy that is the Hidden Agenda. Morris admits that he was instrumental in Anarky’s death, having chased him down after seeing him running injured. Chubb and Whitaker meet with Commissioner Montoya to debrief. Whitaker expresses a sort of sympathy for Morris, a young and impressionable child. Chubb comes around on him, telling her partner that he’s an anti-government murderer. Montoya steps in and orders them to just process Morris. This is an issue for lawyers and judges to sort out. They have their own duties.

At Jace’s bunker, he and Vol discuss the probable connection between Arkadine and Seer. Vol informs him that Arkadine has now been arrested, and is currently en route to Gotham. Jace is doubtful that Arkadine will pay for his crimes and instead decides to sniff out Seer. He asks Vol to try to hack his way into a meeting between the Seer and his Moral Authority. Jace heads out to meet them.

Meanwhile, Commissioner Montoya has an audience with Tanya Fox and, considering the lawyer’s views on masks, asks her to defend Morris, as he has no one else to stand by him. Fox is reluctant to help Montoya as the latter doesn’t fully agree with the Anti-Mask mandate Gotham has put into place, in large part thanks to the backing of the Fox family. Montoya is more concerned with the injustice of the child’s future of being imprisoned while those that manipulated his worldview get to walk the earth freely.

Members of the Moral Authority arrive at the location Vol (acting as Seer) provided. They immediately sense that something’s up, but it’s too late. The next Batman arrives and a battle ensues. Jace notes that he doesn’t exude the same sense of terror the original Batman did and as a result is having a tougher time being as efficient of a weapon. He takes a gamble and removes the lower portion of his cowl; the part that hides his skin color. This move gives the intended reaction of fear from the enemy, but with no further information that can help him locate the Seer.

I Am Batman #2 closes on a message to the Moral Authority from the Seer, who had been watching from afar. They are to protect Morris and take out Batman. Another contingent of the independent militia heads off to work.

Analysis: Playing into Gotham City’s overall Fear State, Seer has a firm stranglehold on a growing contingency of angry conspiracy theorists and unites them into a radical Moral Authority as seen in I Am Batman #2. This timely topic exposes the dangers of sowing distrust of the government who is supposed to benefit and represent us, our civil servants who are supposed to protect and serve us, and our media which is supposed to, in good faith, truthfully inform us. This method is surprisingly and tragically easy to accomplish through social technology and relatability, especially now that Gotham is quickly racing towards its dystopian Future State. The Magistrate’s Peacekeepers are overstepping the precepts of the law and the policing systems set in place, and it takes little more than that fact to push the people into an anxious frenzy.

It is too easy to see the character that Morris Caulfield represents in our own world. The battle between altruistic intentions, dubious motives, and moral obligation is often the weapon that charismatic leaders are quick to use and with such a terrible efficiency and, as Commissioner Montoya points out, wield in such a way that only those that the leader manipulates take any fall that may result, while they themselves can often simply dust themselves off with plausible deniability.

This book deals with race at its heart. The discussion between detectives Chubb and Whitaker demonstrates how deeply entangled and divisive this topic is and is reflective of our own contemporary discussions. Whitaker sees Morris as a young and easily influenced child, whereas Chubb points out that this sentiment stands on white privilege. She makes a point to say that if Morris had been black, that he’d be treated far differently. We are left to grapple with that theory and to see how that plays out in our own environments. There’s definitely an argument that is not easily dismissed, no matter our personal political views or ideologies. While Ridley characterizes Whitaker as an empathetic cop, Chubb as his foil points out possible naivete based on race and class.

Race comes up again in a provocative way during the battle with the Moral Authority in I Am Batman #2. Tim Fox realizes he doesn’t seem to be holding the same reputation as the original Batman in instilling fear into his enemies and decides to try something else: removing the mouthpiece he previously had been wearing. This proves he’s not the original Batman, but more importantly that he’s black. This revelation instantly drives terror into his prey who, even though he doesn’t cough up any relevant information, still gives Jace the reaction he was going for.

Another important topic discussed happens between Renee Montoya and Tanya Fox. Montoya makes a great point in that her job is to run around arresting criminals and not in seeking true justice. As she points out, the motives and misbehaviors of some of these criminals are a direct result of the climate of the people in power who are in charge of the citizens’ supposed best interests. Does the responsibility of political crime rest solely on the perpetrator, or do the people who broadcast the messages of fear and hate share the load? Montoya feels like she is arresting weaponry, but not the performing justice that bringing in the trigger-pullers would bring.

I Am Batman continues to run strong with its storytelling and art. In every panel there is the tension and anxiety of the uphill battle that Gotham is facing as it deteriorates into what may prove to be its lowest form since No Man’s Land. Ridley and his team waste no stroke or word in this deepening and impactful title.