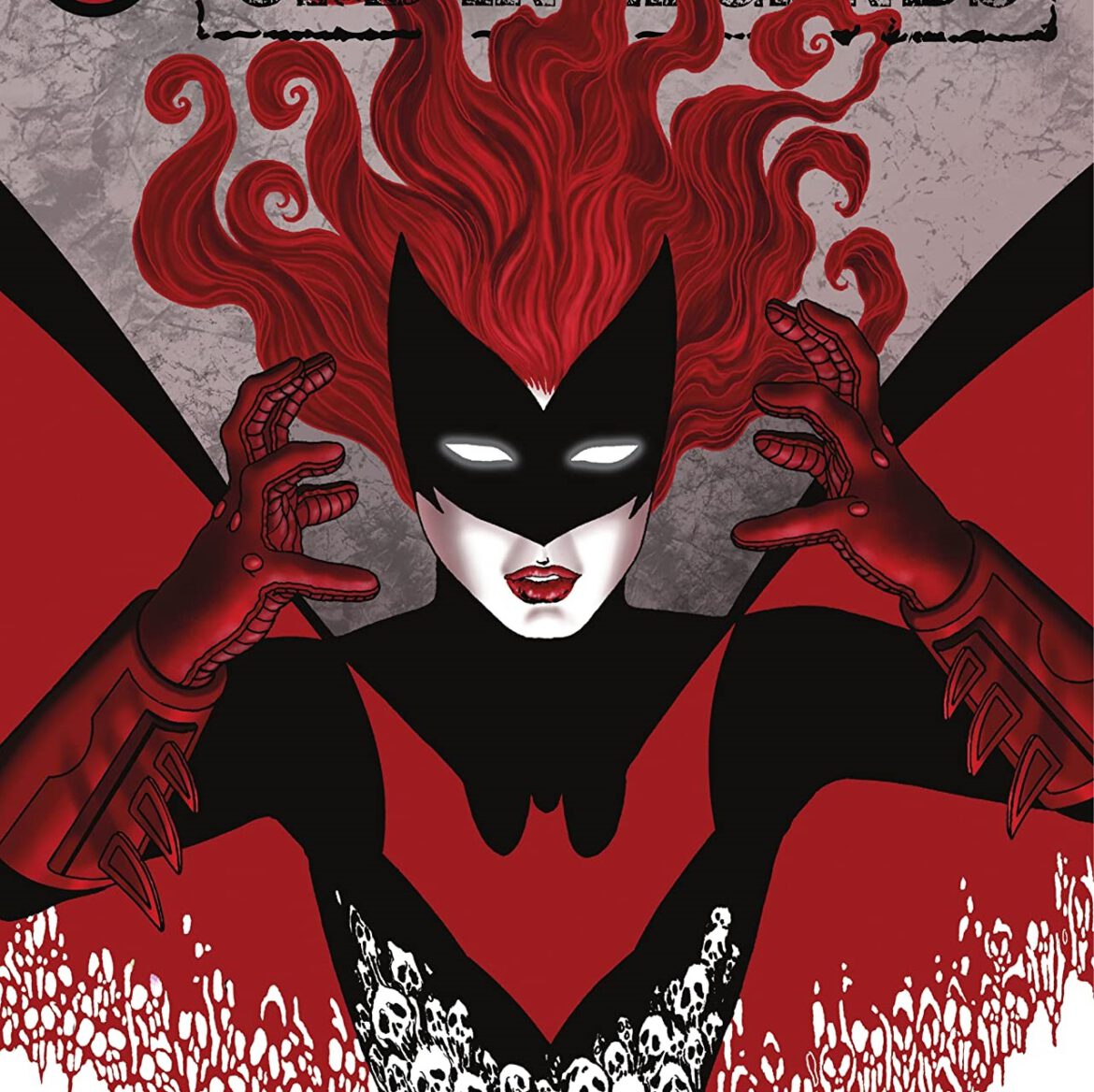 Overview: In Batman: Urban Legends #8, Batwoman and Batgirl team up, Batman takes down Professor Pyg, and Azrael and the Outsiders battle new villains.

Synopsis: The first story in Batman: Urban Legends #8 has Batgirl filmed on camera attacking a helpless bystander. The scene switches to Kate Kane’s apartment, where she is cutting pomegranates and chatting with Beth Kane (formerly Red Alice). They discuss her recovery until Commissioner Montoya appears at the door. Montoya shows Kate the video of Batgirl and demands answers. Beth joins them outside, and Commissioner Montoya questions her “stability” before departing. Kate dons cape and headdress and heads out after contacting Oracle for assistance. Receiving no answer, she finds Batgirl alone battling Magistrate forces and swoops in to help.

After dispatching the assailants, Batwoman shows Cassandra Cain the video, and Cass indicates that she did no such act. They discuss the silence from Oracle until a voice comes over every nearby monitor in a proximate building. The voice mocks them, revealing that it knows a great deal about them both, and then shows them a picture of Beth with her eyes bleeding. Batwoman races home to find Alice wielding a knife, standing over a litter of Magistrate robots. Batwoman soothes her until Beth returns to her body.

Kate and Beth discuss this problematic “Seer” who has hacked into Oracle’s networks and their limited options. Beth indicates that she has some people she can call on for assistance; or, at least, Alice can do so.

Analysis: This is a cool story. I loved finally getting Kate Kane back as Batwoman, and as someone who found Greg Rucka’s Alice arc compelling, it is utterly fascinating to catch up with Beth Kane again and see how her struggle is unfolding. Alyssa Wong is doing excellent work as the writer for the Star Wars Doctor Aphra title, and she manages to capture a lot of complexity in two different dualities in this narrative (Kate-Beth and Beth-Alice). There’s even a nod to the complexity of the relationship between Renee Montoya and Kate. Georgiev’s realist art meshes well with the story, and the images of Red Alice in various reflections are both frightening and thrilling. I would have liked to have seen more conversation between Cass and Kate (because who wouldn’t?!?!), but this is a fascinating, lively story with an excellent balance of dialogue, character development, and action. As someone who thinks some of the Urban Legends stories have been far too long, I’m pleased to see DC limit this entry to two chapters and am excited for the finalé.

Synopsis: The second story in Batman: Urban Legends #8 sees Thomas Wayne reading young Bruce Wayne a bedtime story about three little pigs. Flash forward, and Batman is searching for a young girl whose parents are begging for her release. Professor Pyg is looming over the girl but is interrupted when he realizes that Batman is coming. Batman goes from rogue to rogue, as Ventriloquist finally reveals Pyg’s location. As Thomas’ bedtime story narrates, Batman infiltrates Pyg’s hideout and literally blows down the doors to find the girl as yet unharmed. He smiles as he says, “Little Pyg, Little Pyg.”

Analysis: There’s not much to this story, though it is suitably creepy for an episode set to release so near to Halloween (and of course the choice of Professor Pyg also reflects the season). It is reasonably effective for what it is, although I am not sure what to make of Batman pumping the Mad Hatter and Penguin for information regarding Pyg.

Synopsis: The third story in Batman: Urban Legends #8 sees Azrael infiltrate a building to find a rogue named “Bullet-Tooth.” Bullet-Tooth proclaims that death has no jurisdiction in Gotham and sets off a bomb. Azrael pulls the dead villain from the wreckage and contemplates whether his existence as a bloody angel of vengeance is really needed. The scene switches to a hospice where Jean-Paul works, and he has a conversation with a young man in active recovery. Jean-Paul returns to the Gotham mission and finds Batman waiting for him. They have a conversation about the dead rogues; Jean-Paul tells Batman none of them are his work. Batman warns him to avoid killing, and Azrael decides to visit the morgue. A zombified Bullet-Tooth reanimates and Azrael prepares for the resurrection.

Analysis: I am not blown away by Azrael in general, but his rejection of the extremes pushed by the Order of St. Dumas makes him more interesting as a character. Like Red Hood, he does not share Batman’s aversion to killing, which creates some of the usual interesting tension between the Dark Knight and the members of the Bat-Family/Allies more willing to end lives. I am unsure how this story can sustain three chapters, however.

Story #4: The Outsiders in “The Fearful” Part 1 by writer Brandon Thomas and artist Cian Tormey

Synopsis: The final story in Batman: Urban Legends #8 takes place in Future State Gotham, thirty years in the future, as the Signal rides some kind of leonine mount, reflecting on the fact that Black Lightning remains entombed in Tatsu’s sword. He is chased by a horde of wretched-looking people. In this future, Scarecrow’s Fear State has become permanent. The Signal reaches his destination, the former Arkham Asylum, and tells his mount to go. The creature, who is revealed as Teekl, argues. He will stay and channel Black Lightning’s power to fight off the hordes, so that Signal can “cast the spell.” He uses his demon arm to cast the sword into the vortex.

Time recedes as Black Lightning’s spirit arrives in Gotham right after Joker War. In the middle of the Earth, the Outsiders are battling Vogel the Lord for control of the surface. Metamorpho transforms into Frankenstein and defeats Vogel. Spirit Jefferson appears to the Jefferson of the past and reveals that Signal sent him back to kill Jonah Winfield, a protégé of Dr. Jonathan Crane. Jonah had been exposed to Scarecrow’s fear toxin twice, and on the second exposure, he transformed into a creature known as the Fearful, who exudes fear toxin.

The Outsiders confront Manfield, who seems confused and wants to be left alone. Spirit Jefferson touches the Fearful and he releases his fear toxins. The Outsiders begin fighting each other and imaginary villains as the Fearful escapes. He is tripped by a bolo, which turns out to be thrown by Red Robin, who has just arrived on scene.

Analysis: Brandon Thomas is an excellent writer, and even though I do not generally read the Outsiders, his first turn in Urban Legends in “The Caretaker” story won me over and actually sparked some interest in the team. This first entry feels much like the first chapter in “The Caretaker” in the sense that readers are just plunged in the middle of an ongoing narrative that will not be familiar to readers who are unaware of the Outsiders’ current activities in continuity. Although I dislike this approach because I do not think it accommodates potentially new readers, I am willing to give Thomas the benefit of the doubt and see how this develops. Red Robin is also my favorite Robin, and it is exciting to see him jump in to assist the Outsiders in countering Fear State. The tie-in to Fear State is also reasonably well-done, although the addition of Future State complicates the narrative.

This book is generally solid and does not have any real clunkers. I love the Kate and Beth Kane story in particular and am excited to see how it finishes.