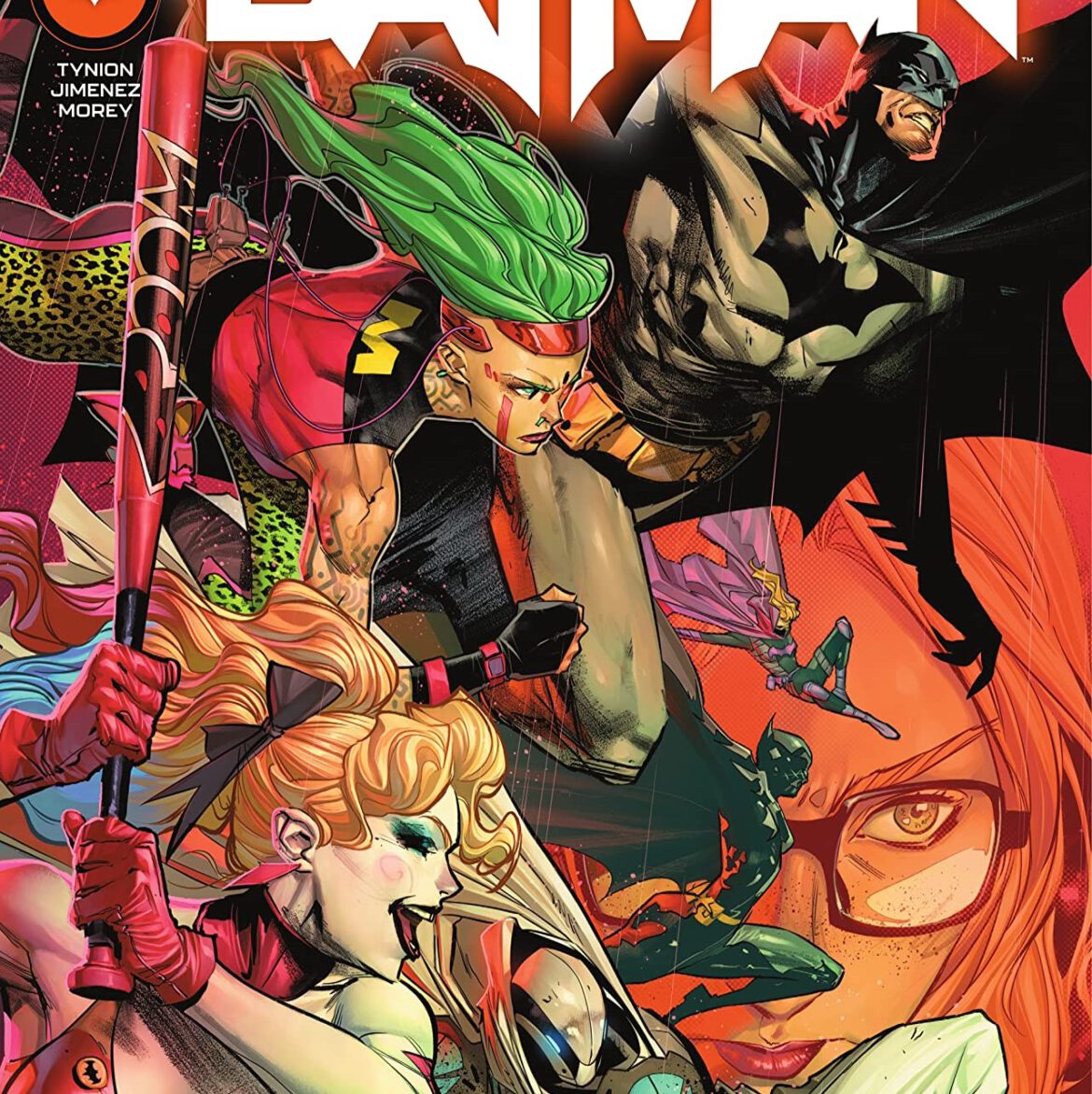 Overview: In Batman #116, Batman and Miracle Molly set out to stop Scarecrow and Peacekeeper-01. Meanwhile, Poison Ivy’s plants cause earthquakes in Gotham City.

Synopsis: Batman #116 begins deep beneath Gotham City, in Poison Ivy’s Eden paradise, as Magistrate soldiers prepare to open fire and eliminate all who are taking shelter down here. Ghost-Maker throws a wrench in that plan, taking on the entire Magistrate deployment single-handedly.

Queen Ivy, meanwhile, is sick of people constantly coming for her. While Master Wyze pleads with Ivy to halt her plans, she begins the process of destroying Gotham via the root system she has established beneath the city.

Elsewhere, Miracle Molly leads Batman through the sewers. She’s tracking the location of the mind machine when they hear an earthquake caused by Ivy. Before they can catch a break, Scarecrow appears, telling Batman that his time is up.

Batman tells Scarecrow that he’s been deprogrammed of Crane’s new fear tech. Scarecrow assumes as much, but he notes that the Unsanity Collective tech uses the same Mad Hatter technology that he adapted for his own purposes. Suddenly, Miracle Molly loses control and succumbs to intense fear. Batman carries her to Scarecrow’s lair, guided by Dr. Jonathan Crane himself.

Scarecrow leads Batman to a table where Sean Mahoney is undergoing the final Fear State programming. Scarecrow notes that he pushed Simon Saint to hire Mahoney, in part because of Mahoney’s particularly troubled and traumatized past. This past made Mahoney the perfect candidate for Scarecrow’s plans.

Molly pleads with Batman to save her. Batman, in turn, demands that Scarecrow release her. When Scarecrow refuses, Batman throws a batarang to knock Scarecrow off balance. The two start to fight when a shot rings out.

Sean Mahoney holds the gun that fired upon Crane. Batman takes the momentary pause in the action to free Molly as Crane slumps to the floor.

Batman tries to reason with Mahoney, but instead, Mahoney dons his Peacekeeper-01 mask. He tells Batman that he knows what Gotham needs. The two pick up where they last left off, battling once more for the soul of Gotham. While they fight, Molly sets off to disarm Crane’s mind machine.

In Eden, Ghost-Maker warns of another Magistrate wave coming. Wyze tries again to reason with Ivy. She rewards him by binding Wyze with her plants, telling him that she will never listen to men ever again.

Harley, right on cue, enters with another Poison Ivy. It’s the missing piece that can make Queen Ivy whole, and this missing piece is no man.

Analysis: James Tynion and Jorge Jimenez’s multiple characters and storylines finally converge to deliver the most exciting issue of Fear State yet. Jimenez, especially, brings his A-game with some of the most gorgeous panels we’ve seen in a while, even outdoing the excellent work we’ve come to expect from him.

We get several fights in Batman #116, starting with Ghost-Maker making quick work of Magistrate forces. It’s quite the opener, and Ghost-Maker gleefully hacks and slashes his way through Saint’s forces without breaking a sweat (that we can see).

From there, Batman and Miracle Molly have a showdown with Scarecrow. Despite Batman easily freeing Molly from the mental torment of Scarecrow, this encounter carries with it a surprising twist. Peacekeeper-01, who appears indisposed at first, fires upon Scarecrow, which sets the stage for the real final showdown. The elimination of Scarecrow is expertly paneled by Jimenez. Prior to the shooting, Batman knocks Scarecrow’s mask off, which sets the stage for a wonderful, bewildering reaction from Jonathan Crane as his best-laid plans fall through the cracks with one single gunshot. As Scarecrow falls, Peacekeeper-01 assumes control.

Batman and Peacekeeper-01 battle once more, and the battle is framed as one for the soul of Gotham. Peacekeeper-01 represents a new ideology for Gotham, one evolved by Saint and Crane’s fear state programming. Batman, as noted by Mahoney, represents the old ideology, struggling to save Gotham with old thinking and old solutions.

This dovetails well into other ideas Tynion has been playing with in this final arc. Throughout Fear State, we’ve seen imagery that echoes a protestor vs. police state mentality, as well as a frenzied media that caters to fear-based thinking. This is a parallel to our real-world divisive media wherein each “side” caters to fear tactics to whip their viewers into a frenzy. Much like what we see blaring on our TVs every night, Gotham citizens are also mortified by news broadcasts that paint this picture of a world teetering on the brink of annihilation. Gotham residents are paralyzed with terror, and in this state, they are pressed by the likes of Simon Saint and Scarecrow to accept new, untested solutions to old problems because it will make them safer.

Peacekeeper-01 is that new solution, and as a puppet of Scarecrow, he carries that frenzied mortification with him, claiming that it’s better for Gotham than Batman’s old-school stoicism. It’s an interesting dynamic, one that’s vague enough for readers to draw different conclusions and parallels with the world around them. It also adds some much-needed layering to make this story feel important.

Overall, Batman #116 is one that finally feels closest to the big DC event-style book we’ve been promised for months now. Unfortunately, this Fear State event is reaching its finale in only a few weeks.

Synopsis: The backup in Batman #116 begins at the Clocktower, as Batgirls Stephanie Brown and Cassandra Cain regroup only to find that Oracle has moved her operations elsewhere.

Before they can come up with a battle plan, Magistrate forces move in to engage the Batgirls. The Magistrate bombards the Clocktower, absolutely obliterating it. The Batgirls narrowly escape.

While the Batgirls change into their street clothes, news reports run with a statement from Simon Saint declaring the Batgirls as “terrorists” who blew up the Clocktower. Reporter Grace O’Halloran denies these accusations, but she’s only one lone voice in a cacophony of bad PR for the Bat-Family.

Not knowing where they stand, Stephanie and Cassandra embrace, committing to each other that they’ll stick together because they are Batgirls.

Analysis: The art by Jorge Corona and coloring by Sarah Stern make this Batgirls backup in Batman #116 a thrilling, punk-inspired adventure. The action sequences are chaotic, blending a bit of confusion to amplify the excitement of the Magistrate’s assault on the Batgirls. It works, albeit for the wild and zany color palette that makes this backup feel akin to punk-inspired works like Tank Girl.

The story is paper-thin as our Batgirls’ motivation is merely to regroup, but what the story lacks, the art and characterization more than makeup for it with their unique charm. This may arguably be one of the best backup stories we’ve seen featured in Batman in quite a while.

Batman #116 finally sees most of the players of this Fear State arc actually doing something, and the results are more in line with the exciting and bombastic event book readers were originally promised.