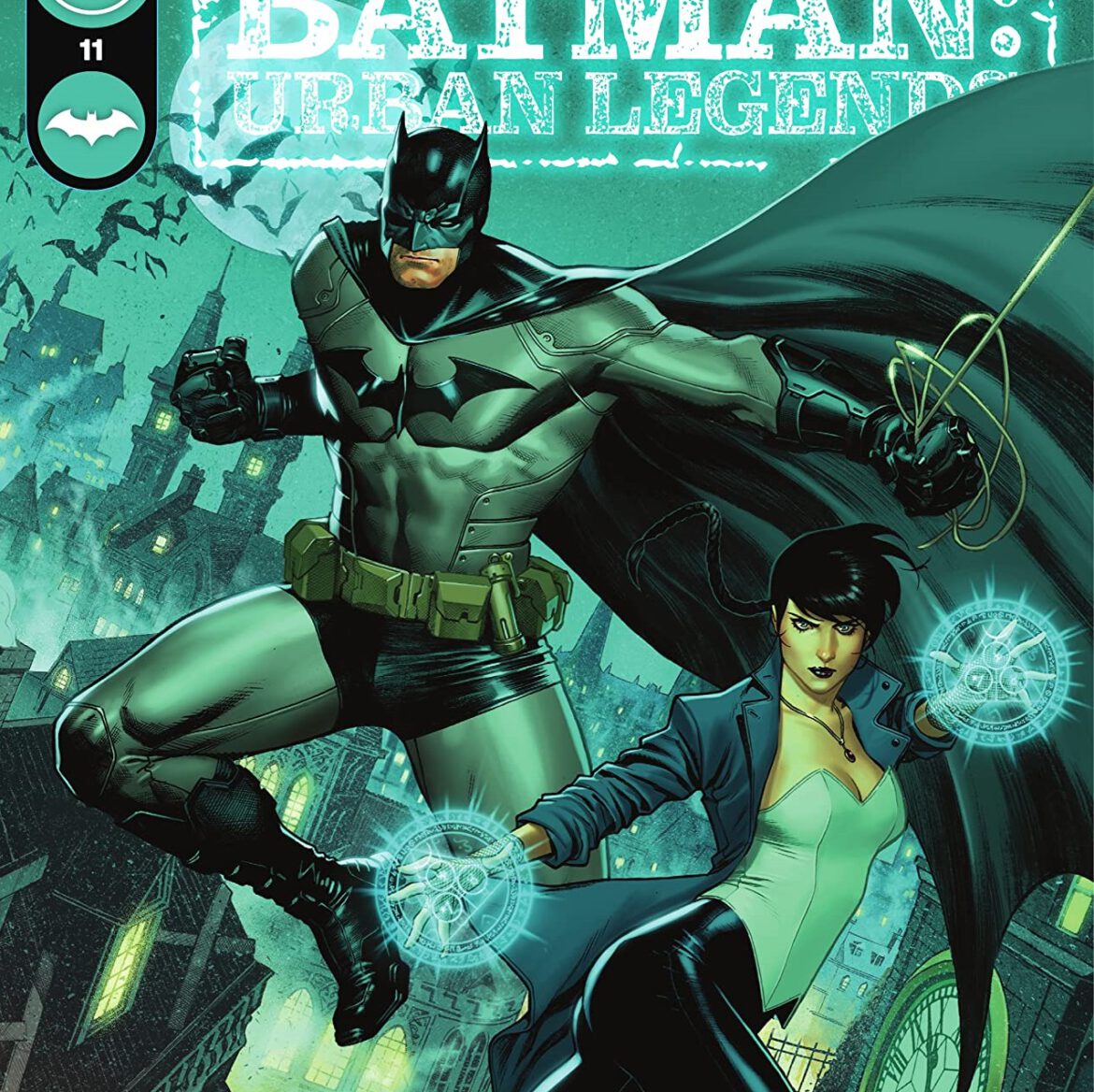 Story #1: Batman and Zatanna in “Bound to Our Will” Part 1 by writer Vita Ayala and artist Nikola Čižmešija

Synopsis: “Jacky” is fleeing and decides to hide in a dumpster. His pursuers refuse to dumpster-dive and look elsewhere. He clambers out, examines his stolen money roll, and encounters a strange-looking man in a white coat with a small dog. The man throttles him.

In the Hall of Justice, Batman, Superman, and Zatanna converse. Superman tries to get Batman to open up. Batman reminisces about a picnic lunch with Zatanna. They cast a spell together, but it quickly got out of hand. Batman assures Superman that he knows what he is doing. They get into the Bat-plane and proceed to discuss their relationship. They arrive at their destination, which is a bleak, flattened landscape. They cast a spell together and pass out next to each other. The white-coated rogue from the opening scenes appears.

Analysis: The first story in Batman: Urban Legends #11 is not a strong story. Although I generally like Zatanna as a character, the dialogue between them is treacly, cliched, and sophomoric. Writer Vita Ayala is playing with time, but the results are confusing, as there is no context or explanation for what Batman and Zatanna are actually doing, nor why Superman is concerned for them. Where/when in continuity is this supposed to be occurring? It is impossible to know.

There’s too much left out and what is present in this story is insufficient to generate much interest in the effort needed to stick with the narrative to find out. Moreover, the editorial group has authorized far too many six-part stories in Batman: Urban Legends, and I cannot think of a single story in the entire run that merits so many pages. Even “Cheer,” arguably the strongest story thus far, could easily have been completed in three parts.

Artist Nikola Čižmešija has been doing lots of work in this book, and while the linework and panel organization is fine, it does not lift up the confusing, relatively uninteresting story.

Synopsis: The Wight Witch awakens in some kind of tank. She is expelled and begins thinking about a photograph of the man she must assassinate. She infiltrates the compound using her psionics to take out surveillance and neutralizes the guards. She sees the fear on her target’s face but kills him with a bullet from a silenced gun. On the way back, she reminisces about her expulsion from her commando unit and recruitment into the shadow life.

Back at her headquarters, she is questioned by her boss, Simon Saint. He pulls a firearm and shoots her in the head. She awakens in the tank again. She is handed an audio cassette and flashes to an assassination attempt in the Atacama Desert. She successfully takes out the target with a sniper rifle in a pitch-black night, using only her hearing to guide the shot.

The scene switches to a snow-covered compound to which she is sent for training. Inside are Minhkoa Khan (“Ghost-Maker”) and Bruce Wayne. Bruce comes over to introduce himself. She tries to remember before the next bullet comes.

Analysis: Ram V is a strong writer, but I did not find the character of Wight Witch especially compelling during the short run in Catwoman. Her powers seem to resemble those of Marvel’s “Ghost” but with little of the complexity and dramatic tension the latter experiences. The integration with Simon Saint and Ghost-Maker is welcome, and it would be wonderful especially for Ghost-Maker fans (which I am) if the character were to continue even now that Tynion is off of the books as showrunner.

Artist Anand Radhakrishnan’s dense artwork and the color saturations underscore the confusion and horror elements of the second story in Batman: Urban Legends #11 well enough. I am not sure there is enough in the character of Wight Witch to really propel this story through three parts, but Ram V’s work is generally compelling and worth following.

Synopsis: Christopher Freeman is speaking with what appears to be a ghost. Detective Xiao arrives and warns Freeman to cease any detective work and stick to his job as a coroner.

Freeman complies and then relates his story to the audience. A few years prior, he awoke in the morgue but as a corpse rather than as a coroner. He has no idea how this happened, but when he revived, he found he was able to speak with dead people. He recently moved to Gotham from New York but finds the city almost unbearable.

He is so buried in his thoughts that he almost falls down the elevator shaft in his building; a cute lady neighbor named Hannah brings him out of his reverie just in time. As he picks up his scattered groceries another neighbor named Regina helps him and eventually accepts Freeman’s invitation to join him for some ramen. Later, as he lies awake in bed, Hannah is disturbed in her bathroom and is left floating in a pool of her own blood.

Analysis: I found this a tight, well-controlled little story. I was not familiar with the character, so I did a bit of research. While he shares the same name as the “Kid Eternity” character from DC Universe, the powers and origin story seem quite different – at least through one chapter of the story as seen in Batman: Urban Legends #11.

There’s not a huge amount to go on here, but the story is logical, sequential, and coherent. I am interested, especially since this is only a three-part story.

Synopsis: Ace and Batman are in the Batmobile on their way to rescue hostages being held by the Black Eagle Gang at the Romanov Hotel. The dynamic duo (or this duo, anyway!) go through various thugs and make their way through the building.

Batman is momentarily stunned by a villain with a flamethrower, but Ace jumps in to save the day. Batman reminisces on how he found Ace four years prior. Trained only to fight and kept in captivity, isolation, and total darkness, Batman and Nightwing discovered him abandoned by the Joker.

Because a shelter would have euthanized him, Batman took Ace into Wayne Manor and attempted to rehabilitate him. Batman muses on the similarity of their journeys from darkness into light. At the Hotel, Batman finds Dr. Hugo Strange welcoming him. Dr. Strange is wearing a girdle of explosives.

Elsewhere in the hotel, Ace locates the hostages, outwits the guards, and releases the first captive. She promptly stuns him into unconsciousness. Batman and Dr. Strange converse; Batman does not understand why Dr. Strange is willing to die by suicide, and eventually the answer comes: Stage IV cancer.

Dr. Strange detonates the explosives and Batman is blown onto the roof. The thugs previously posing as captives consider what to do and radio their boss, who tells them to package the unconscious Batman up for transit to Siberia. Ace is delivered to Herbert Schwann at the Gotham Pet Cemetery for “retraining.”

Analysis: A six-part story featuring Ace? I love dogs and appreciate Ace but am quite unsure we need six chapters to tell an Ace story. But perhaps that is unfair? I’m not sure. The story as seen in Batman: Urban Legends #11 is simple thus far, and the video-game progress through the Hotel feels quite formulaic. There’s nothing that’s offensive or poorly done here, but I do not feel a passion for reading a six-part series on Ace the Bat-Hound. Your mileage may vary!

I do not think a Batman-Zatanna story is a good choice for an anchor story, and the editors should re-evaluate whether so many of the stories need four to six chapters. That said, the Wight Witch and Eternity stories throw some sparks into an otherwise dull entry in the series.