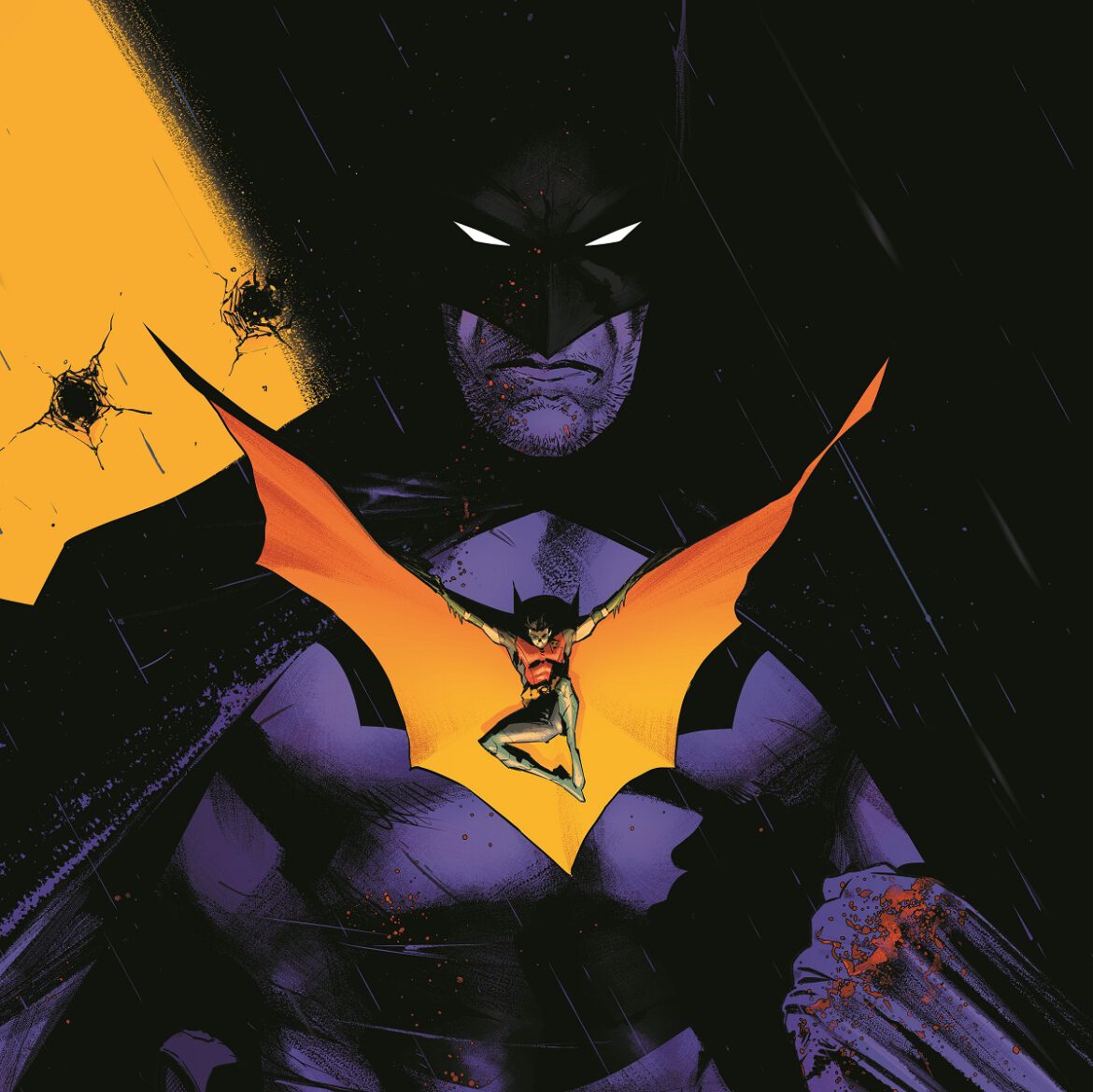 Synopsis: Batman #125 begins in “another time,” as Alfred Pennyworth is cleaning up in the Batcave below Wayne Manor, and he hears a beeping from the deep, dark recesses of the cave.

Bruce Wayne awakens from a dream where three different incarnations of the Joker gloat over the bodies of two Robins, Catwoman, Nightwing, the Batgirls, and others. Bruce thinks to himself that he never dreams unless he wants to, and in doing so, it’s a way to use his subconscious to piece together a mystery.

Bruce calls Selina Kyle and checks in. She’s elsewhere, in bed. Valmont comes into her room, telling her that he just made coffee. Bruce ends the call before Selina can, telling himself that he just needs to let go of the past because there’s a murderer on the loose, one targeting the rich.

At night, the Gotham City police have a residential complex surrounded. A man inside has hostages, and he’s threatening to kill them. Batman enters and disarms the potential killer, but the Caped Crusader realizes he’s too late. There are two victims lying on a couch.

Batman rushes back to the killer, demanding to know who put this man up to his murderous deeds.

Back at his newer Batcave, Batman watches a video released by Penguin, justifying his murder of Colin and Clara Fitzroy. Penguin will murder anyone in Gotham City who has inherited over five million dollars unless they give that money away to the less fortunate.

Robin (Tim Drake) enters, telling Batman that he’s sorry about the murder of Colin, who was a friend of Bruce’s. The two chat and Batman tells Robin that Bruce has an invite to the Flugelheim Gala, which is a wealthy socialite event and most likely the next target for Penguin.

While Bruce walks into the event with an escort, Robin sneaks in through the sewer system. Bruce surmises that Penguin will most likely use gas to ensure maximum impact, so he orders Robin down to the boiler room. Robin follows through, taking out Penguin’s goon and noting that the boiler has been outfitted with gas. Bruce grabs a utility belt that Robin snuck in before heading out to confront Penguin.

Penguin attacks as expected, welcoming the attendees to their deaths. Bruce dons a Batman mask and intervenes, and Robin joins in the fight. When Batman goes to take Penguin down, he realizes that Oswald Cobblepot didn’t actually show. Penguin is really Clayface, and Clayface warns that if the gas won’t work, the building will collapse.

Robin struggles to open the doors while Batman threatens to blow Clayface up with a special injection if he doesn’t narc on Penguin. While Robin struggles, one of Penguin’s goons shoots Robin in the neck. Batman orders Clayface to protect everyone from the building, which begins to crumble, while he rushes to save Robin.

Batman carries his “son” to the Batmobile and rushes Tim to the hospital. Tim tells Batman that it’ll expose them, but Bruce mulls it over, thinking of Jason, before deciding that exposure is worth the risk of ensuring Tim’s safety. Bruce changes Tim into plain clothes and carries him into the ER.

At the hospital, Penguin also lies in a bed. Batman shows up, and Penguin asks him how the brat is. Batman tells Penguin that Robin is fine. Penguin reveals that he’s dying of mercury poisoning, and he rants about how the wealthy and elite of Gotham never gave him the time of day, of how he had to carve out everything he had. Batman pushes back, bringing up the death of Colin Fitzroy. Batman believes Colin to have been a good man. Penguin, on the other hand, said Colin was the worst of them, gambling at the Iceberg Lounge and harassing Cobblepot’s staff.

Penguin tells Batman that he saved the Dark Knight for last. While he can’t kill Batman, Penguin can certainly end him. Cobblepot takes a cyanide capsule at the same moment that he hears police sirens outside and calls for a nurse, framing Batman for his own death.

Back at the Batcave, Oracle checks in with Batman. Bruce notes that Penguin overestimated framing Batman, telling Oracle that crime is down and criminals are even more afraid of Batman. However, he realizes that there’s a mystery just out of reach.

Back at Wayne Manor, deep within the original Batcave, that beeping seen in the opening of the issue starts again. Something opens, and a Batman-themed robot emerges. “Failsafe online,” it says.

Analysis: Batman #125 leaps right into an all-new mystery with Chip Zdarsky at the writing helm and Jorge Jimenez returning to the title for art duties. It’s an incredible first issue for this new direction on the title, as Batman finds himself in the throes of tracking down the murderer of Gotham’s wealthiest citizens.

We quickly find out that a bitter Penguin is the mastermind behind this plot, and it’s a final act of revenge, as Oswald is in the hospital, dying from mercury poisoning. As a final act, he calls the police and summons the nurse when Batman arrives, killing himself in order to frame Batman for his murder.

In the course of this investigation, Robin (Tim Drake) takes a bullet to the neck and is hospitalized, which propels Batman into contemplating how he handles being the Caped Crusader. As Tim bleeds out, Batman flashes back to his poor handling of Jason Todd, and he risks outing Tim and himself in order to ensure Tim’s recovery, which is the opposite of the route he took when Jason died. This moment, as well as the moment when Batman rushes Tim to the Batmobile (in which he refers to Tim as his “son”), shows the beating heart beneath the cape and cowl. Just under the surface of Batman, the creative team reminds us that there’s an ordinary man there, and he oscillates between his sworn duty and his love for his Bat-Family.

Opening and closing this murder plot by Penguin is a bookend of some strange “failsafe” in the old Wayne Manor Batcave. By the issue’s end, this failsafe activates, revealing itself to be some sort of artificial Batman program, though we’ll get confirmation on whatever this is in the next issue.

Jimenez’s return to the title is definitely a treat, and his work is as beautiful and masterful as ever. Tomeu Morey’s colors have always complemented Jimenez’s pencils, and this issue is no exception. Visually, Batman #125 is a gorgeous, fast-paced, action-adventure. Chip Zdarsky’s narration as Batman comes across as believable and fitting, and Clayton Cowles’ lettering certainly adds emphasis to the weight and darkness of Bruce’s inner monologue. It’s subtle, but Cowles deserves credit for defining a clear distinction between Bruce’s voice and the inner Batman voice readers see throughout this issue. It definitely enhances the reading of Batman #125.

On a final note, there are quite a few references hidden within the pages of this issue. Readers may immediately think of the “Bruce Wayne Murderer” storyline from years back when Batman is framed for Penguin’s death. Early on in the issue, there’s a nod to Batman: Three Jokers when Bruce dreams of three different Jokers executing the Bat-Family.

Jimenez also draws a Penguin eerily similar to Danny DeVito’s turn as the character in Batman Returns, which celebrates its 30th anniversary this year. On the note of this reference to the Tim Burton film, there are a couple of other references that seem to call back to the 1989 Batman film. For starters, the big target Penguin chooses to gas is the Flugelheim Gala. In the 1989 film, Joker famously gasses patrons at the Flugelheim Museum before meeting with Vicki Vale. It’s a fun nod, especially for Michael Keaton-era Bat-fans.

All in all, Batman #125 is a terrific first issue for this new ongoing creative team on Batman.

Synopsis: The backup in Batman #125 begins at the Iceberg Lounge, after Penguin’s infamous murder by Batman, Finbar Sullivan seeks to take over the illicit operations running through the club. Catwoman intervenes and subdues Finbar, only to be attacked herself by agents of Ms. Eiko Hasigawa and the Yakuza.

Before things get too heated, the Underbroker arrives, and with him is a behemoth of a robot named the Executor, who will be mediating Oswald Cobblepot’s will. The Executor breaks up the potential arguing parties and tells them that the will shall be read in seven days.

Catwoman heads back to her apartment. Before Selina can get too cozy, there’s a knock at her door. It’s the Executor, and he’s going to pay to enlist her help to find ten people in Oswald Cobblepot’s will that cannot be located. These ten people, apparently, are Cobblepot’s children.

Analysis: It’s been a while since we’ve had a backup storyline that runs in sync with the main storyline. In this backup, Catwoman is tasked by a new villain, the Executor, to find the ten children of the recently deceased Oswald Cobblepot. The art and colors are brighter and a little more cartoony than the main storyline, but they serve the fun, fetch-quest purpose of this backup story.

Since this backup really only introduces the players and the mission, there’s not much to say. It’s definitely entertaining, and the setup promises a compelling mystery for readers. Who are Penguin’s children? Are they people, or are they penguins? Also, why are there ten of them!?

The sooner we know, the sooner we can quell our curiosities (or fears) about what sort of secrets Cobblepot may have been hiding all these years.

Batman #125 is a compelling launchpoint into a new mystery. It’s quite the page-turner, put together by a top-notch creative team intent on surprising readers at every turn.