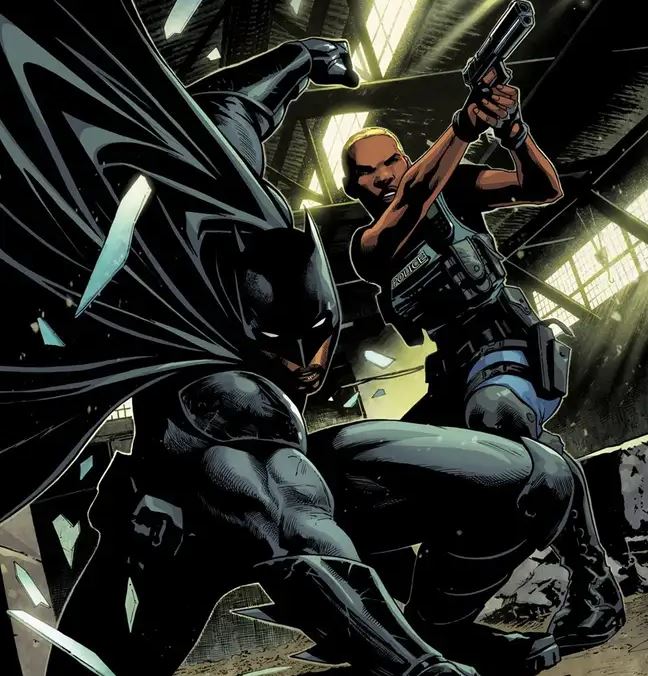 Overview: In I Am Batman #11, heads are on the chopping block in the aftermath of the Manray saga, and the Question comes to New York!

Synopsis (spoilers ahead): As I Am Batman #11 begins, Detectives Keenan and Chubb give their account of the events that lead up to Manray’s capture and Chubb shooting Keenan. Afterward, Keenan “advises” Chubb to leave New York City and head back to Gotham.

We next see Mayor Villanueva and his advisor Carmichael conduct a meeting with none other than Commissioner Renee Montoya, of Gotham City. Renee plainly states that their suggestion that she take up the Commissioner’s job in New York is a cynical move after the previous police chief was outed as a bigot. Nevertheless, the two men state that she still traveled to the city for the meeting and doubt that this will be the last they see of her.

At Billionaire’s Row in Manhattan, Tam Fox comes home to her mother, Jace, and Tiffany. She’s using a cane to walk, and she declares that she’d rather stay in New York than return to Gotham. Tanya wishes that father Lucius and brother Luke could complete the family with their arrival, but Tiffany storms off at the mention of them.

Chubb is met by Renee in the park, and the two go over Chubb being transferred from Gotham to New York. Renee admits that she feels that her time in Gotham is at an end, and she’d like to start things fresh with Chubb. Whitaker calls Chubb on a tip on gun smugglers, forcing the conversation to end.

Tanya meets with the mayor, who is displeased that Tanya doesn’t find her instructed cheerleading of his administration to be a helpful use of her time. He tries to explain that his progressive politics are vulnerable to a harsher candidate, should he be unseated from his office. Tam and Tiffany watch their mother, and Tiffany reveals that she blames herself for what happened to Tam. Tam assures her that nothing was her fault, and the two vow to live their lives however they choose to live them, fearlessly.

Whitaker and Chubb meet and are instantly set upon by snipers. Batman arrives in time to save them, and Chubb goes straight back to headquarters and decks Keenan for not responding to her calls for backup during the shootout.

In the Bronx, the mayor meets with Rafael to discuss why he was a target of Manray. They’re being spied on by Batman, who is then met by the Question, who wants to learn the identity of Anarky’s killer.

Analysis: In the aftermath of the Manray storyline, John Ridley gives us interesting turning points for the characters and intriguing introductions of new characters into the stew, such as Renee Montoya. The outline and structure of all the events are good, yet the writing lets it down in my opinion in I Am Batman #11.

For one thing, there’s a real DC CW vibe to the construction of these scenes. Everyone has their armor on and acts hostile towards each other. More than fair, it’s a political story involving the police and vigilantes, but this is an issue where scenes end with people rudely just walking out of the panel with a wry or snide remark as their backs are to the other character (and us). This is something that got old for me when watching The Flash, with characters so completely up in their feelings, that the resultant line would reliably always be “I’ll go talk to him/her/them.” We don’t get that line here, but in every (non-action) scene, the concluding panel is a distanced shot of someone walking off while the recipients of their insults watch on.

It’s demonstrative of a communicative filter between what Ridley’s putting on the page and how we’re – or I am – receiving it. Everyone is so tense and the things going on are so important, but it’s all at the same emotional register, so there’s a deadening effect when I read it. Chubb has every right to be PO’d at her fellow officers, and Keenan is a piece of garbage, but at the same time it feels too easy. Tiffany’s going through a hard time, but she storms off from a scene meant for her sister coming home from rehab. That scene, in particular, grinded on me because she’s just a kid, and yet she’s being treated as though she’s got equal agency with the rest of the family. Where exactly is she going when she leaves the room, and what’s her mom and sibling’s response to her storming out? It’s a placeholder scene of drama that doesn’t factor in the ages or character dynamics of our cast, so it reads like a scene that anybody could be in. It’s true for the rest of I Am Batman #11. Chubb punches out Keenan at the end and gets to walk away. None of the remaining racist officers attack her, nor do stand-in superior officers try to sort things out. No, the status quo was never in jeopardy, it’s just a scene of Chubb being fierce.

I resent melodrama like that and the scene with Tanya and the mayor because they feel half-hearted. We know that these black women are not pushovers and certainly will fight back in the face of adversity, but everyone is ensconced in the system that they’re fighting against. There are no visible boundaries, just scenes that talk about the boundaries. Tanya tells the mayor that he “helped perpetuate a biased system because it served his needs,” but she’s really talking to the reader and not Villanueva. He’s not going to respond to that charge with any emotion (in fact if you read the scene he doesn’t even look at her), because maybe he sees her as beneath him. It doesn’t matter because the scene is set up for Tanya to walk out on him. Maybe the lack of her public support would make him more vulnerable, but we don’t get a sense of that unless it’s explicitly spoken out loud. And if it were to be, it’d be couched in clumsy dialogue. Stories about “the system” should be about the work and the struggles and the efforts to change it, not simply talking about “the system.” It’s literally the “We live in a society” meme, it’s telling, not showing, and when it tells it isn’t saying anything interesting.

It’s tough because this is John Ridley – writer of the best DC miniseries in decades with The Other History of the DC Universe. Nothing can take that away from him. In I Am Batman, the same political interests power the storytelling, but it’s really to the rhythm of falling down the stairs. Characters talk at each other, not to each other, and the politics are so portentous that they read as less realistic and more pandering to the modern leftist reader. I don’t believe any of this is pandering. I believe Ridley is doing the best story he can, but the verve of the writing just isn’t being applied here.

Kudos to Tom Derenick on the second half of the artwork in I Am Batman #11, however. The shot of Batman falling into the alley was awesome.

The artwork is pretty good, but the politics and writing come across as hollow, focusing more on showboating melodrama than actual substance.