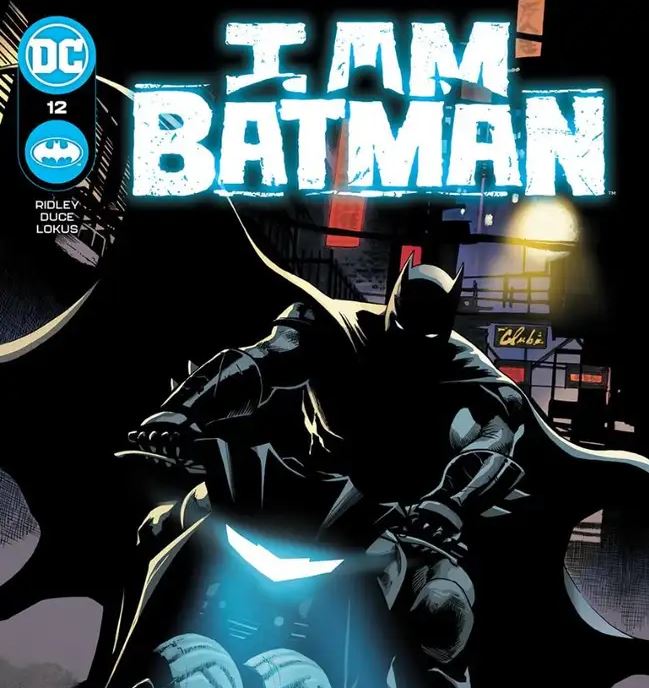 Overview: When the Question comes to town in I Am Batman #12, it’s a clash of ideologies as she and Batman investigate the murder of Anarky!

Synopsis (spoilers ahead): As I Am Batman #12 begins, Batman (Jace Fox) is approached by the Question (Renee Montoya), who asks for his help in locating the real killer of Anarky. Unfamiliar with the kinds of heroes the Questions are, Jace councils his father Lucius on whether or not she can be trusted. Lucius reminds his son that Tanya – Lucius’ wife and Jace’s mother – pulled a gun on him as Batman while defending the person presumed for the murder. That must be what’s puzzling the Question enough to investigate in New York City.

Meanwhile, Tiffany Fox is having a bit of a personal crisis. She attempts to stop a mugging before police showed up in time, and at the Fox Family Impact Fund Jobs Training Center, she mishandles an effort to help someone with their online work. She confides in her older sister Tam who chides her for acting without thinking in regard to the mugger, telling her to help one person at a time.

Batman and Question find Morris Caufield, the man initially arrested for Anarky’s murder before forensics revealed he wasn’t the fatal shooter. Caufield, out practicing his shooting near a farm range, pulls his gun on the heroes before the Question talks him down. He reveals that when he shot Anarky, he’d already been pumped with bullets. At the Helix headquarters in Harlem, Vol informs Batman and Question of a group of activists who call themselves “The Rest of Us” who had open contact with Anarky. Anarky was investigating the murder of one of the group’s leaders, Danny Chan. Question – as Renee – goes back to NYPD to comb through the file reports and returns to Batman with the information that Detective Kenan was Chan’s arresting officer.

Analysis: I’m losing my patience with the writing in this book. The topics are so hot-button, the characters care so much and are so stressed by the weight of the world, and the plots and conspiracies are genuinely interesting…but only on paper. You don’t feel any of what’s going on, and I’m starting to think that may be a problem with the artwork.

Take the scene with Batman and Question interrogating Morris Caufield in I Am Batman #12. Caufield drops Tanya Fox’s name, to which Batman responds with, “Take her name outta your mouth!” Now, with an outburst like that reacting to the mention of his mother, one would assume there’d be a close-up of Batman’s eyes or gritted teeth or even a different pose to illustrate the loss of composure. After all, we know that Tanya Fox is Jace Fox’s mother, but the other characters don’t. But this goes unacknowledged by either Caufield or Question. Additionally, the panel of Batman’s outburst could be subbed in with any dialogue or neutral word balloon. He’s drawn static and unmoving.

This is a small thing but speaks to a larger issue that rejects emotional engagement in this story. Situations like the one described in the scene are that of classic comic book secret identity drama. The reader should be put in a place where they ask, “Can Jace keep his cool? What is he thinking when he hears a criminal mention his mom by name? Two worlds crashing together; how does this make him feel? Well, Ridley and Christian Duce show us that it pisses him off, but that doesn’t matter. His sudden outburst has zero consequences and might as well have never happened.

You can’t do that in a story like this. Not only does it deaden interest in how characters will act at any given time, but it further demonstrates the failure in making a story like this really hit hard for the reading audience. Everything feels so distanced and hands-off. We should be with Jace’s perspective more than just watching the plot happen. Jace is our main hero, but he is hardly given any close-up shots to zero in on how he’s thinking about the changing situations in this investigation. It’s all surface storytelling, not substantive.

I have to say that Tiffany’s subplot was more interesting here in I Am Batman #12, but I still don’t enjoy how she’s written in the dialogue. It’s like she’s too smart for the person she’s meant to be, even for being a thirteen-year-old (someone had to tell me that was her age, IDK where those years came up as I’m pretty sure she wasn’t even a middle schooler before this run). It’s great that she’s intelligent, but dialogue such as “I led with privilege, not compassion” and “If you want to cancel me, go ahead and cancel” sound like an older college-aged teenager on the internet rather than a smart young girl whose family is in a particularly unique financial and communal position.

It seems as though Ridley cannot balance the story with its characters in making a cohesive comic for the two to exist within each other. It's a shame, but it's also annoying to read because, issue after issue, the same angry emotions play out. Still, you can't care because it's all copied/pasted into scenes without proper utilization. Anger, sadness, stress, hesitation, and anxiety should have consequences in stories, as they aren't just ingredients to fill up space.