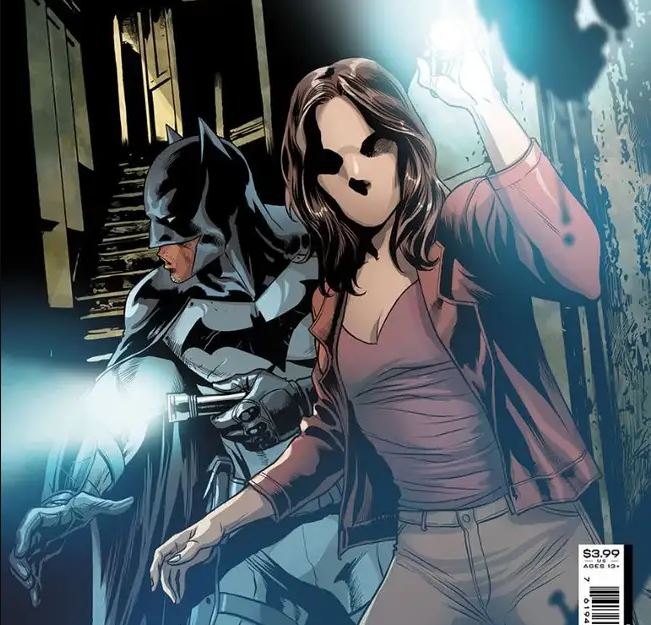 Overview: In I Am Batman #13, the Batman of New York and the Question’s investigation into the NYPD continues, with the higher-ups growing less comfortable with their livelihoods being threatened by vigilantes.

Synopsis (spoilers ahead): As I Am Batman #13 begins, Batman (Jace Fox) tells the Question (GCPD Commissioner Renee Montoya) that Officer Keenan worked on the case of Danny Chan’s murder. He believes him to be the culprit, but Question advises him to tread lightly, considering Batman’s poor reputation among the NYPD.

Tiffany sees one of the reformers from the Fox Foundation, Kaylin, together with a guy trying to hassle her. She spots that they have matching gang tattoos. Unsure how to approach the situation, Tiff reaches out to Jace, who is too distracted with his own investigation to be of any use. When Tiff tries to ask Kaylin about the guy, saying she just wants to help, Kaylin accuses her of cherry-picking, saying she’s unable to help everyone. This frustrates Tiffany further, who resolves to put on a tracksuit and mask and hunt the streets of New York with a pair of Escrima sticks.

Question meets with Officer Keenan as Renee and gets the impression that the man thinks he and his department are untouchable. When she resolves to go after him along with Batman, the two heroes are told that Danny Chan was a police informant.

Analysis: I’m over the writing style of this book, and I’d be very interested to see a printed script for the artists because I’m ready to hand them some of the blame for its insistent mediocrity.

The pacing is lifeless and staccato in I Am Batman #13. I can appreciate Ridley’s presentation of all the players and supporting characters from scene to scene, but there’s little energy in the layouts. Most scenes are one page, sometimes two and four pages of the issue’s action sequence. In itself, that’s nothing wrong, but the 180-degree rule (that characters in a scene should always be shown in a left-to-right communicative relationship with each other) on display jumps out that the talking scenes are just that, people talking, with no meat for the reader to remember as the story moves on.

Two sequences in I Am Batman #13 are particularly annoying. One is the diner conversation between Officer Keenan and Renee. The visual focus begins with Keenen, drawn in a black background for maximal bad guy-ness, before backing the camera away to see him and Renee talk as if the discussion is about anything else. The first two panels are basic storytelling; nothing is being let down by the histrionic way to present who the book has always presented as – to use the character’s own dialogue – a “real piece of crap.” But Renee is our hero in this scene, our point-of-view character. We should be zeroing in on her reactions, her point of view, and how she’s receiving what Keenan is telling her. Of course, she can’t give away either her identity as the Question trying to gather information or as the visiting police commissioner getting a feel for the NYPD, which alone would be enough for some character-based revelations considering the position she’s in and has put herself in. But we’re not given any of that potential in how the scene plays out. It’s merely Keenan being an evil caricature of a bad cop and Renee silently letting him vent for him to hang his own neck later on.

I’ve been sympathetic to Ridley’s story of meaningful justice and how it revolves around proper policing since I began reading this book, but Keenan is a character incompatible with that story being good. He’s too predictable, too unengaging, and too unsympathetic to be believed. The history of policemen and women using the badge as a license to kill and giving them a high authority over regular civilians has become more and more understood by the masses in the last several years, but if Keenan is to represent that reality, he needs to embody it with a better-written ideology. “People are pieces of crap” isn’t good enough, and the thread to connect him to Batman or other vigilantes isn’t given strong enough introspection to really drawn lines tying between the two aside from state-sanctioned violence. The fact that we’re not shown what Renee thinks of him aside from her platonic dialogue makes the scene feel like a waste of time; we never needed it. It could’ve been summarized in a single flashback panel when she meets Batman later.

The next scene in I Am Batman #13 with Hadiyah repeats the level of unenthusiasm for a scene rife with dramatic potential. I didn’t describe this in the synopsis as the impact it has on the main story is invisible. Hadiyah tells Jace that when growing up in “a country where evil, powerful men get what they want and go unpunished,” she got wind of a plot to kill her evil, powerful father. She went to warn him but found him beating up her mother, so she kept silent. The next time her dad left the house, she never saw him again. The point of her telling Jace this is so that he can learn that one must justify the mistakes of their past in order to move on, but this is too extreme of an example for it to be handy advice to a friend simply. It’s essentially Spider-Man’s origin story, and one that should be delivered with a lot more gravitas than Ridley and the three artists give it. Does her telling Jace this bring the two of them closer? Do more people know about this? Was it hard for her to talk about it with Jace? None of this is apparent because it’s delivered so clinically by the storytellers; it might as well have not happened.

This series is titled “I Am Batman,” implying that Jace Fox is Batman in present times, bringing modern needs for a classic idea of justice. We won’t question his mantle inheritance because the title informs us that we can’t; he is Batman. For such a definitive declaration, the character has a lot of self-doubt and insecurity in fumbling his way through crime fighting. Perfectly acceptable conditions for a young hero, but not only are Jace’s feelings undramatically rendered but they’re bogged down in equally undramatic conflicts and sub-plots that carry none of the intended weight for us to get a sense that any of this is important.

It’s bad because this book may well just fade off into the ether of DC Comics that have a year and change’s worth of a run, get canceled, and somewhere down the line, Jace Fox will become another minority character forgotten and asked about and insisted by his fans when writers who never bothered to read about him will fail to include him in big-time Batman crossover stories. It happened with Cassandra Cain, it happened with Orpheus, and it can happen again. But that’s no one’s fault if the story that features the character isn’t good enough to keep him around.

This saga needs to tighten up quickly because it's hard to care about the character beyond his relationship with Lucius Fox. The potential is great but diminishes if it goes unfulfilled. For its own sake, I'm really hoping this can get itself together.